When Things Get Tough,
the Tough Get Rowing

Four young doctors team up for a transatlantic row for a good cause.

What takes 32 days, 22 hours and 5,500 kilometers to complete? If you’re the four young men who set a new record when they arrived in Antigua on January 16, the answer is rowing across the Atlantic.

“We had calluses on our hands and our calf muscles had wasted away so much that it took a couple of days before we could put one foot in front of the other without looking as though we had drunk six pints,” says Eoin O’Farrell, one of the four. “But we had done it, we had come sixth in the Talisker Whiskey Atlantic Challenge and we had set a new record for a transatlantic row by a Republic of Ireland crew.”

The foursome consisted of junior doctors Seán Underwood (25) and Patrick O’Connor (28), podiatrist Eoin O’Farrell (26), and entrepreneur Thomas Browne (27). They left the Canary Island of La Gomera on December 14 along with 26 other teams competing in what is known as the world’s toughest rowing race.

What inspired them to do such a thing? “Seán and I used to row when we were teenagers at school,” says Eoin. “Because he was such a keen rower, Seán’s uncle gave him a book about someone rowing across the Atlantic. He was 13 then but it planted the seed of an idea in his mind.”

On New Year’s Eve three years ago, Seán asked Eoin if he would take part in the race with him. When Eoin agreed, Seán approached Patrick who also said yes.

“That made three of us but then Seán met Tommy six months prior to the race and he wanted to join us,” says Eoin. “It was lucky he did as I don’t think we’d have made it with just three rowers.”

There was an incredible amount for them to do in the months coming up to the race. Tommy and Patrick had to learn how to row and all four had to spend time training. They also had to find a suitable boat for their ocean crossing.

They found a 28-foot ocean rowing boat that was being sold by a team of women in the U.K. “They had called her Liberty and used her to cross the Atlantic so we knew she was up to the job,” says Eoin. “We decided to change her name to Saoirse, which is the Irish translation.” 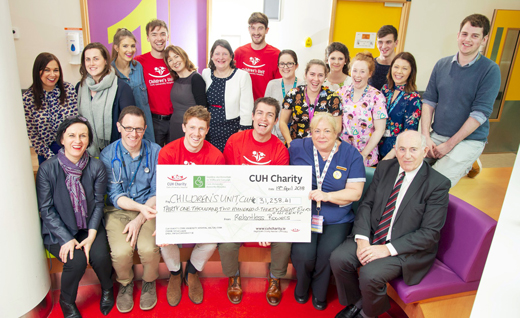 They also had to complete the courses that were required to participate in the race. These included courses in sea survival, ocean navigation, and first aid at sea.

Lastly, they had to figure out how to finance their endeavor. “The boat cost €60,000 which we paid for out of our own savings,” says Eoin. “But we needed another €60,000 to cover everything from the race entry fee and safety equipment to shipping the boat back home. We’re very grateful to all the local sponsors who came on board to help with this.”

To make the challenge even more worthwhile, they decided to use it to raise funds for Cork University Hospital. “They say charity begins at home, and Seán, Patrick, and I are from Cork,” says Eoin. “We’ve also worked in the hospital. They are building a new children’s unit and we decided to try to raise €20,000 for the dedicated cystic fibrosis ward.”

While the four were busy preparing for the race, their families were in a state of denial. “I think our parents thought it would never happen,” laughs Eoin. “Then when it looked like it would, they became incredibly worried – supportive but worried.”

When the start day finally arrived, conditions were quite stormy at sea. Eoin remembers it all vividly.

“The boats set off at five minute intervals, so we could see the others for the first six or seven hours,” he says. “The water was choppy but we were in second place at one point.”

That wasn’t to last long. “Our auto helm was wrongly calibrated and it directed us back towards La Gomera so that lost us a few places,” says Eoin, ruefully.

That auto helm caused trouble for weeks. “We couldn’t recalibrate it for two weeks as you need calm, flat water to do so,” says Eoin. “Luckily we had calibrated the other one in Cork before we left. But these machines are meant to be changed over every two hours, so the one we had kept overheating.”

Something else went wrong on that first day. The emergency beacon was set off by accident and when the coast guard tried to reach them, it couldn’t make contact.

“This meant my dad got a call saying that we had indicated there was a problem,” says Eoin. “If he was worried already, this made it much worse.”

Seasickness was another big issue. “We were very naïve,” says Eoin. “We thought we would suffer through and get over it but we should have started taking medicine before we left. Instead it took us five or six days of being really sick before we got our sea legs.”

Once those initial problems were dealt with, the four settled into a routine. They worked in pairs, taking two hours on and two hours off.

“We would prepare all of our meals – which consisted of freeze-dried food such as porridge and blueberries or macaroni and cheese – in the morning and do any chores that needed doing. Then you would do your two hours of rowing and during your two hours off, you would eat and spend the rest of the time sleeping, or trying to sleep, in one of the two cabins we had on board. It was important to sleep when you could as you didn’t know when you would get a chance again.”

There are certain moments that stand out in Eoin’s memory from the trip. “We saw dolphins and whales, fabulous sunsets and incredible stars,” says Eoin. “I rang my grandad from the satellite phone at one stage and hearing the joy in his voice was something special.”

Then of course came the moment they arrived in Antigua. “Seeing the glow in the distance having not seen land for 32 days was amazing,” says Eoin. “I didn’t know my parents would be there but they were waiting on the dock with the others. That was something I’ll never forget.”

The trip meant something different to each of the four, but Seán perhaps put it best when he said, “We believe you only get one chance at life. Everybody dies but not everybody lives. There is not and never will be a good time to row an ocean so we acted on our dreams in the here and now. If we can make a difference to just one child in Cork University Hospital Children’s Unit by competing in this race, then it will all have been worth it.”

They have currently raised more than €29,000. If you would like to make a donation, you can do so by visiting relentless.ie. ♦

Sharon Ní Chonchúir lives and works in west County Kerry, and much of her writing is concerned with the changing face of modern Irish culture. She is a fluent Irish speaker.