Sheila Connolly has published over 30 mysteries, including several New York Times bestsellers. Her series include the Orchard Mysteries, the County Cork Mysteries, and her newest, the Victorian Village Mysteries. Connolly, who is passionate about history and genealogy, has been an art historian, an investment banker, a non-profit fundraiser, and a professional genealogist. She is a member of the Daughters of the American Revolution as well as the Society of Mayflower Descendants and owns a cottage in west Cork.

Sheila lives in “a too-big Victorian” in southeastern Massachusetts with her husband and three cats. They have a grown daughter who is pursuing her own writing career.

Tell me something about your Irish roots – was your family very Irish?

Depends on how you look at it. My father’s parents were both born in Ireland, in Carlow and Cork, but my mother hated them from the first time my father took her to visit them, so I never even met them. At least I knew that 50 percent of my blood was Irish, but when I tried a DNA test, it came back at 75 percent – my mother’s mother, who was adopted when she was very young and never knew as much as her parents’ names, turned out to be Irish as well.

I didn’t visit Ireland until my daughter was in her teens, and I thought she should know something about her own history (no matter what my mother said). We’d planned a short trip and drove down from Dublin to Carlow for Sunday dinner, then kept going to Leap, the town nearest to where my grandfather was born. Carlow was nice enough, but Cork was everything I’d hoped Ireland would be. It felt like coming home. Corny, I know, but in some ways it seemed familiar. Two years ago I bought a small cottage in Drinagh, in sight of where my great-grandmother,

Bridget Regan, was born and married. Half the people I meet seem to be relatives, and if they’re not, they know someone who knows someone, etc. It’s very different than the way I grew up, and I’m enjoying being a part of it.

Where did the idea for the Cork Mysteries character Maura Donovan come from?

I began with a concept that runs through the series: insider versus outsider. Maura is both. She’s young, has no more than a high school education, and has no plan for a future – until the Irish-born grandmother who raised her dies and Maura finds she’s inherited a house and pub in Cork from a distant relative. She thinks she’s going to make a quick trip, sell both, and come back to Boston. Funny thing – she’s still in Ireland, five books later.

Having an American heroine allows me as a writer to let Maura ask all the dumb questions about how and why things are done in Ireland. Plus her Boston city background gives her a different perspective on crime-solving, in a place that has very little crime. (At least, until I started writing about it. I’ve apologized to the local gardaí.) 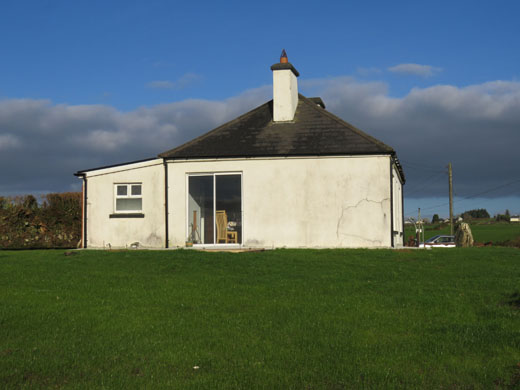 The author’s cottage: “The cottage is a work in progress – we’re supposed to paint this summer. And it should have a patio on the west side, in front of the glass doors by then.” (Photo: Courtesy Sheila Connolly)

You switched from being a genealogist to a mystery writer – how did that happen?

Nobody ever stops being a genealogist – it’s addictive. It’s also great training for a mystery writer.

I’ve always read a lot, as did my mother and grandmother (although they preferred historical fiction with a lot of royalty in it). I started with Nancy Drew and read piles of cozies before they even had a genre of their own. I was an academic art historian for years, which taught me to look at things and describe them. Then I was an investment banker and later a fundraiser, which taught me how to make up stories for things I knew little about.

If you look at all my series, family history runs through them consistently. I borrow all the time from my own ancestors because I know them, and why make something up when you’ve already got a story to use? And some of them led very interesting (if not always quite legal) lives.

Overwhelmed, though mostly by real-world issues. Writing is a place I can escape to, where I can make the story come out the way I want it to.

Apart from travel? Collecting things. Books, of course, but also a lot of old things (like cookware), which in a small way capture how people lived in the past. I like that others have handled the things I’m using. Actually, these fragments of the past are not usually expensive, but they do take up a lot of space!

Name one of your heroes.

Eleanor of Aquitaine, who led a challenging life juggling marriages to two kings and preserving her inherited properties, and who survived it all.

Boring stuff: landline phone, clock-radio, small flashlight, antacids, toenail clippers, pens and highlighters, band-aids, and sticky pads. All jammed together in one square foot of space. (If you’re wondering, the books are stacked on the floor next to the bedside table.)

Grubbing out dandelions from the yard, at a penny per plant, when I was eight. I think I made a dollar. First paying job was probably as a work-study student in college (my first assignment was to catalog the stuffed bird collection) and graduate school. First “real” job was as an assistant professor in art history at Duke University. 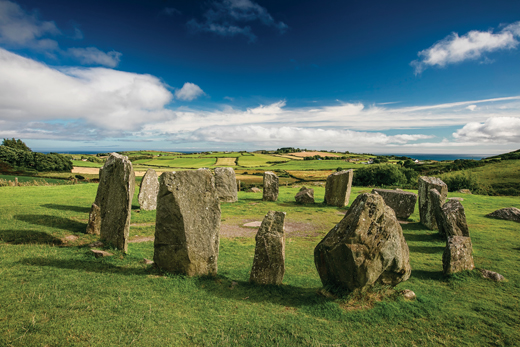 Eating pistachio ice cream with my father. Or maybe learning to putt from him, when the putter was taller than I was.

Don’t give up just because something is difficult.

I can make or fix a lot of different things. (My father was an engineer – which reminds me that another one of my earliest memories is my father showing me how to putty a window – I think I was three). I’ve done a lot of home repairs.

Do you strike up conversations on long plane journeys?

Rarely. I always travel with something to read (printed, not electronic).

It’s not so much as where as a how. I prefer being outside somewhere, weather permitting, but mostly I make myself comfortable on a seat, shut my eyes, and just focus on what I’m hearing or even smelling. After I clear my head of all the things I should be doing and all the lists that I’ve made, I can start with a blank slate and think about questions like, what should my character do next? What usually happens is that an unexpected idea pops up and makes perfect sense, but I didn’t consciously think of it.

Waking up in my cottage in Ireland, answering emails while watching rainbows outside the window (on a good day there’s more than one), going to the Skibbereen farmers’ market, and the hardware store, and other small shops, then coming back to the cottage and doing something practical like scrubbing mold off the walls. And talking to people of all kinds.

Your favorite qualities in friends?

Movie you will watch again and again?

Ireland, since the first day I saw it, nearly 20 years ago. But Concord, Massachusetts, and the surrounding area is a close second (most of my non-Irish family lived and died in Massachusetts. I visit a lot of cemeteries to say hello to them.) 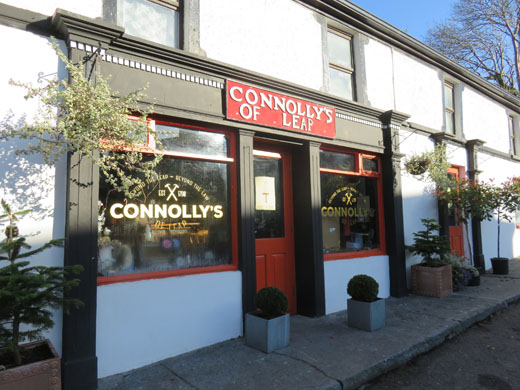 Connolly’s of Leap, which inspired the author’s “Sullivan’s Pub” in Leap, which serves as the center of activity in the County Cork Mysteries. The owners are not related to the author who explains: “Eileen Connolly McNicholl is one of the Reavouler Connollys, while I’m a Knockskagh Connolly – they’re about three miles apart. Eileen shut the place down for a couple of years when her husband died, but her younger son, Sam, reopened it two years ago now and it’s come back to life. How could I not write about the place?” (Photo: Courtesy Sheila Connolly)

Strong coffee – the good stuff. And I’ve gotten very fond of Irish whiskey over the past few years.

I love to cook, and I love to experiment with food, so my tastes have changed over time. If I was stuck on a desert island, I’d want a supply of desserts.

Best opening line in a book or piece of music?

“Nothing ever happens to me.” That’s the first line of Mary Stewart’s book My Brother Michael, which I read in high school. Great opening for a mystery.

I want to see what I can accomplish, whether it’s wallpapering a Victorian parlor or writing a book. It took me five years to find a literary agent when I started writing, and another two until I saw a book with my name on it on a shelf, but I never gave up. I believed I could do it, and I wanted to prove it.

What have you been working on recently?

I’m currently working on five different book series, all but one of which are mysteries (the fifth one is a paranormal romance series). That’s a pretty full schedule. I’m trying to get to Ireland at least twice a year, now that I have my own place there, but life keeps getting in the way.

More books, I hope. It took me a long time (and multiple careers) before I found something I was good at and enjoyed, and I have no plans to stop.

I’m intelligent, analytical, curious, hard-working, methodical. I’m a loyal friend, but I believe in letting other people find their own way. I don’t judge others. I communicate better on paper than face to face. ♦

Editor’s Note: I’m currently reading the Cork Mysteries, which features Sullivan’s Pub in Leap where most of the action takes place. It’s owned by Maura Donovan, an independent young woman raised by an Irish grandmother in Boston. Maura   has a penchant for solving crimes. And there’s a great supporting cast of regulars, including Old Billy, who spend his days by the fire telling stories to tourists but behind all he’s the wise man of the community who knows where all the secrets lie.

Connolly is great at mixing in her two passions, genealogy and history, into her writing – family connections, the big house, the famine, and the standing stones all feature in her stories. I love this series. For someone who didn’t grow up in rural Ireland, Connolly nails the characters.

One Response to “What Are You Like?
Sheila Connolly”

Review of Books:
A Parting Gift

William Trevor’s posthumous Last Stories. ℘℘℘ How strange to read a published work knowing it to be the...