Stolen 30 years ago, New York City’s monument to the Irishman who enabled the Port of New York and New Jersey to become the largest in the world has been restored.

Nearly 30 years after the bust of John Wolfe Ambrose, the Irishman who enabled New York to become one of the greatest sea ports in the world, was stolen from his memorial, the New York City Department of Parks and Recreation, The Battery Conservancy, and architectural firm Superstructures are returning Ambrose’s monument to its former glory. The bust and its home will be unveiled and rededicated on May 15, the anniversary of Ambrose’s death in 1899.

The program on the day will commence with bagpipes played by piper Robert Patrick Lynch and appearances by NYC Parks Commissioner Mitchell J. Silver, Warrie Price, president of The Battery Conservancy, Jonathan Boulware, executive director of the South Street Seaport Museum, and Vice Consul General of Ireland Kerry O’Sullivan. Journalist and author Marian Betancourt, who wrote about Ambrose for Irish America’s April / May 2017 issue, will speak on the Irishman’s legacy and Ambrose’s descendants will also be in attendance as they will unveil the brand-new memorial to their innovative ancestor. 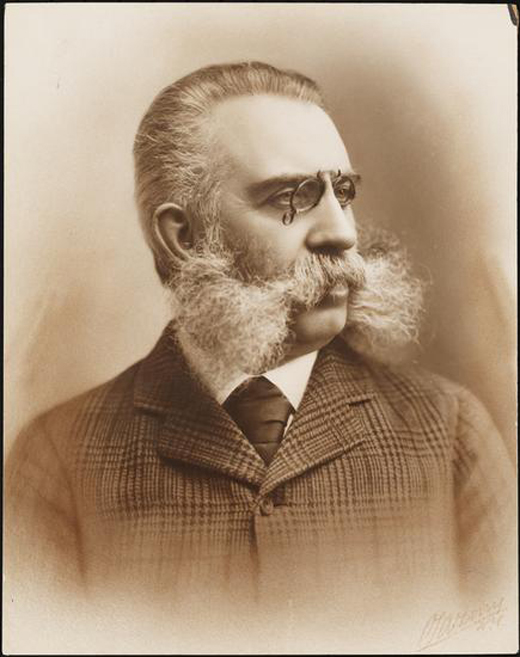 Ambrose was born in Newcastle, Limerick in 1838 and emigrated to the United States in 1851 with his family. After settling in he attended the University of the City of New York (Now NYU) where he studied mathematics. Ambrose had a brief stint in the newspaper business but soon came under the tutelage of a contractor named John Brown. His learning experiences with Brown led him to develop a more efficient street cleaning plan, he laid the first eight miles of pneumatic tubes in the United States, and the dredging of New York Harbor’s inner channels deepening and widening them to handle the top of the line transatlantic ships of the day leading to an economic boom that he would never witness as he died before its completion.

“To me the monument represents the Irish immigrant community which had an huge impact on the city of New York and how, once here, Ambrose himself had an enormous impact on his adopted city,” Jonathan Kuhn, director of art and antiquities for New York City Parks, told Irish America.

The original monument came about organically after Ambrose’s death in 1899, when friends of Ambrose presented his family with a bust sculpted by Andrew O’Connor Jr, an influential Irish American sculptor in his own right. In the early 1930s, the Ambrose family donated the bust to the city and on June 3rd 1936, a new monument to house the bust made of Stony Creek granite with a relief map of lower New York Harbor was dedicated by Mayor Fiorello La Guardia at the Aquarium in Castle Clinton. In 1950, the stele was relocated to the southern wall of the concession building where it stood in peace for almost 40 years. In 1990, the bust of John Wolfe Ambrose was stolen and is still missing to this day.

Ambrose’s monument was restored as part of a Battery-wide refurbishment project that also saw 10 other monuments repaired and is part of a decades-long park-wide revitalization effort. The restored monuments, which also include the Giovanni da Verrazzano memorial and the statue of John Ericsson, have been relocated to the newly-christened Hero’s Walk depicting significant figures of New York City history along the perimeter of The Battery on the south side of State Street. O’Connor’s bronze bust of Ambrose was recreated by a sculptor based on photographs of the original and quietly reinstalled late last year. The official rededication ceremony will start at 10:00 am Tuesday, May 15, at State and Pearl Streets. ♦

For more information about the Ambrose statue rededication, visit nycgovparks.org or thebattery.org.