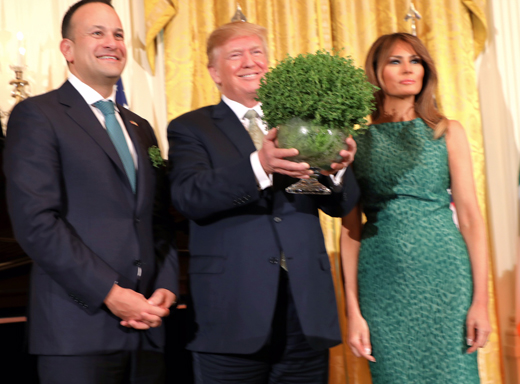 While the Taoiseach and President Trump’s interactions were pleasant – Trump declared that relations between Ireland and the U.S. are “outstanding and only getting better” to the press gathered in the Oval Office – political differences between them remained. Varadkar commented to a Texan crowd on his disappointment in Trump’s leadership: “It’s really tough to see a country that is built on freedom not being a world leader in that space anymore.”

Varadkar made a special point of stopping in Oklahoma, where he spoke to the Choctaw Nation in Durant, thanking them warmly for their ancestors’ charitable collection for the Irish during the Great Hunger.

“Back in the 19th century, when the Irish people were oppressed, abused, neglected, and degraded by our colonial master, at our lowest, your spirit of generosity was at its highest,” he said. “It reminded us of the value of compassion, and encouraged us to try to become a beacon of hope throughout the world.” ♦