Archaeologists have discovered a significant number of Viking-era artifacts and architectural remains during the building of Dublin’s new Hodson Bay Hotel in the Coombe.

Among the architectural findings were the ruins of 11th century Hiberno-Norse houses with post-and-wattle fences, as well as later settlements from the 13th to 14th centuries. The team also found a medieval stone well, two wall foundations, vaulted cellars, and kilns.

“You could go your whole career and not work on a site as extraordinary as this one. The artifacts we have found are very unique,” Aisling Collins, the archaeological team’s leader, said in a statement. 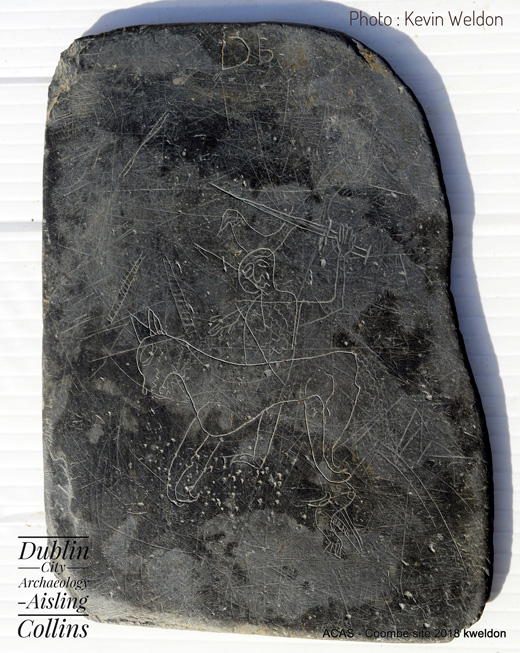 The archaeological team also unearthed a panoply of items that range from kitchenware and near-complete examples of pottery to other items like a decorated stick pin, a copper alloy key, and weighing scales, as well as a silver coin that dates back to King Edward I’s reign. The most significant find was a 12th century piece of slate that features graffiti of a warrior on a horse fully equipped with a shield and sword (above), a rare find due to its preserved and unusual nature. The artifacts will feature in the design of the hotel once it is completed in 2019. ♦ Dave Lewis

One Response to “New Viking Finds at Site of Dublin Hotel”