In this interview from our June/July 2018 issue, Mary Kay Henry, the international president of the two-million-member Service Employees International Union, talks to Patricia Harty about the Fight for $15 (minimum wage) campaign, how President Trump is ruining America, and growing up Catholic – one of 10 children – in a Detroit suburb.

Mary Kay, who I first met in 2015 and who shares my Tipperary roots, is articulate, outspoken, and fearless in the fight to raise the minimum wage. She brings to mind Mary Harris “Mother” Jones, the fiery Irish-born leader of the mine workers during the early part of the 20th century. Read on to learn more about the $15 campaign, why we must protect and defend against attacks on immigrants, and what she thinks of Donald Trump. 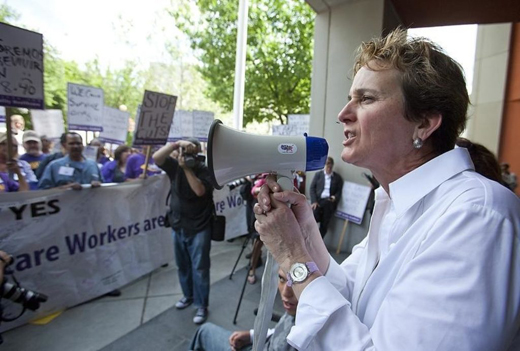 In a group you can make anything happen.

I grew up in a family of 10 children and I am the oldest daughter. I have two older brothers, so I am the third oldest in the line of 10, and I have a visceral feeling about when you move together in a group you can make anything happen. I learned that at a very early age.

Growing up in a Catholic household where we very much focused on the needs of the poor, my family tradition was not about charity, but about justice. People don’t want handouts or charity – people wanted to be able to provide for themselves and their families and have a more just society. You couldn’t grow up in Detroit in 1950s and 1960s and not understand that UAW was making life better for everybody in the state.

[The union support] grew out of an analysis that we needed to add something to our organizing efforts, which was to support the demands of minimum wage workers and try to think about how to organize millions more. We could keep organizing the way we knew how and grow by a million workers every ten years or so. If we did that, we would be losing ground because the attack on unions was such that it became a matter of sticking with the movement and continuing to insist on not just $15 but on being unionized. SEIU is completely committed to these [fast food] workers being able to ultimately win their union. 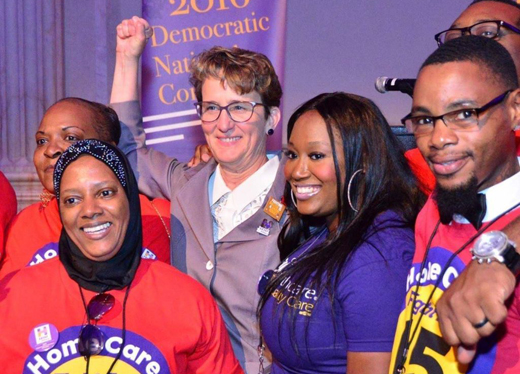 The next American middle class.

We hope to get the multinationals [corporations] to our bargaining table in 2021 or 2022 and create sectorial bargaining for all fast food workers. And we would like it to spread to the entire service and care workforce – home care workers, childcare workers, retail workers – all these workers that have been structured into these poverty wage jobs.

It is going to take us changing the politics of the United States, so we hope to make progress in this midterm election and create more organizations of fast food workers in cities and states. We have a specific focus on the Midwest elections. We are uniting our organizing demands with our political demands. We shouldn’t allow the extremists in our country to suppress the votes of poor white, black, Latino, and Asian Pacific Islander communities.

There is a lot of evidence – Kentucky, West Virginia, who held special elections – that most of the American people have had it and they are willing to show up and vote and make it clear that the current president doesn’t represent the majority in this nation. 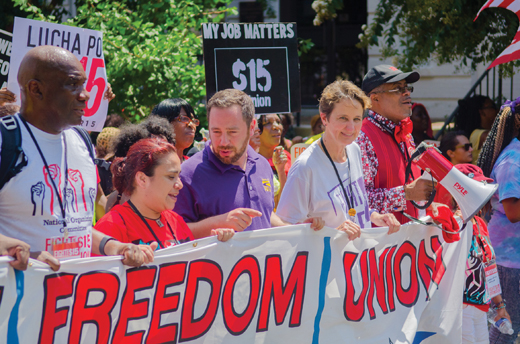 The current administration is a moral outrage.

The idea of deciding what food SNAP recipients (food stamp recipients) will get is just one example of how insulting the current administration is towards justice in this country. We think that this administration is a moral outrage. And that is true for how it has treated immigrants, how it’s treated Muslims, how it’s treated young people, how it’s dealt with the issue of gun violence, how it is dealing with our partners around the world. I would say overwhelmingly, on every issue that matters to our members, this administration has failed us.

The tax cut was a huge broken promise by this president. He promised that he was going to make the wealthy and corporations pay their fair share and make sure that people who are working hard for a living get their fair shot. There is no action or policy that he’s taken that is making that happen for the vast majority of working people in this nation. We think that this administration is a moral outrage.

We protect and defend against the attack on immigrants.

Our union was born by immigrants – window washers and janitors in the city of Chicago. I am sure there were Irish, Polish, Italian and other immigrants in the founding of our union back in 1921. About a third of our union members are recent immigrants and our union has been proud to change the American labor movement policy to welcome immigrants [undocumented] back in 2000. We have done a lot on the temporary protected status, on DACA [Deferred Action for Childhood Arrivals]. We see that as a core mission of our union – to ensure that we protect and defend against the attack on immigrants, but we are also fighting for the full inclusion of immigrants as citizens in our democracy. 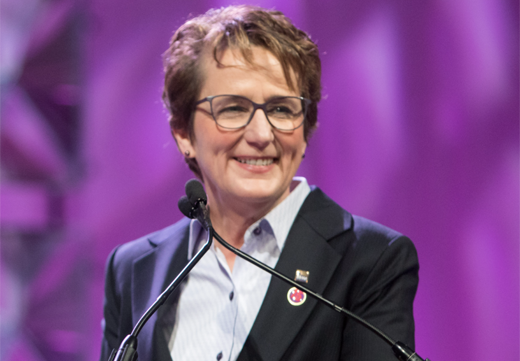 We share your concern for how the institutional church interacted with the healthcare debate.

We [the SEIU] believe in the separation of church and state. We believe in religious freedom. We think every woman should be able to exercise her own conscience. We worked a lot with our Catholic healthcare employers.

Some of whom were against what the institutional church did in the U.S. because they understood that they are serving a secular population, not just Catholics, and so they couldn’t (shouldn’t) impose Catholic teaching or belief for hospitals especially.

We did a lot to advocate for Catholic employers ensuring equal access to all kinds of healthcare coverage, including reproductive services. So I think we share your concern for how the institutional church interacted with the healthcare debate.

There were some very good Catholic healthcare employers that are run by religious women who we think did the right thing and tried to respect the institution of Church while also saying, “Hey, we receive Medicaid and Medicare dollars from U.S. taxpayers and therefore we should be held accountable for making sure that people have equal access to all kinds of services.”

We have seen Sister Carol Keehan on behalf of the Catholic Health Association who took a very bold stand on that issue, making sure that Catholic healthcare employers did the right thing for everybody. 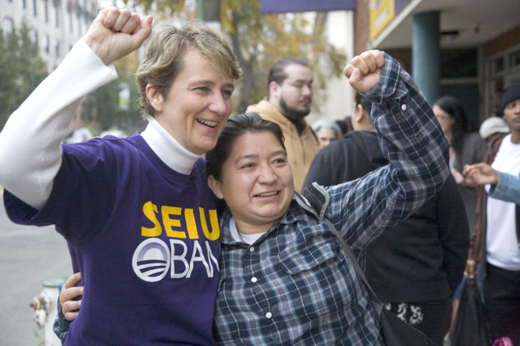 Wake me up when the Teamsters elect a woman.

I am the first woman president in SEIU. The teachers’ unions both have women presidents and have had previous women presidents; the flight attendants had a woman president, the nurses associations – but [SEIU] is probably the first large private sector union that has had a woman. There was a Nicole Hollander cartoon when I was first elected saying, “Oh, my gosh isn’t that incredible!” and then the Nicole Hollander character said back to the cat that is talking to her, “Wake me when the Teamsters and the AFL-CIO elect a woman.”

The thing that got me here [the top job] is that I did some organizing work in California, which was a huge breakthrough for our union. We organized not just one hospital at the time but a whole system. So, I have been accomplished in terms of the union’s core mission to grow and expand, plus the way I lead, which is not to just lead based on what I think, but lead based on listening and creating as much internal political will and unity as I could in, frankly, what I find to be one of the toughest times to lead in the labor movement.

A make-or-break year for the American labor movement.

We are at the height of extremists’ attack on the union. It has been building for forty years, but this is a make-or-break year for the American labor movement and I can’t think of a better time to be a leader who can listen and build unity. 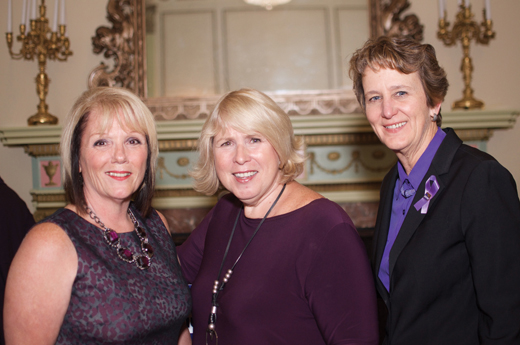 The growth of the Lavender Caucus.

I have been very public about my lesbian identity in this union for my entire 36 years. [Henry is married to Paula Macchello, now retired as an organizer for the Teamsters.] The AIDS epidemic in our union allowed for our healthcare workers to become frontline advocates to make sure that healthcare workers had the protection they needed to care for people with AIDS in the early stages of the epidemic. It also was a way to advocate for dignity and respect.

I would argue that a lot of the Lavender Caucus organizing grew up around that issue – protecting healthcare workers, but also fighting for dignity and respect for people with AIDS, and then that moved to educating our coworkers about domestic partnership benefits and trying to make sure that collective bargaining kind of set the precedent for the rest of the country for health insurance for the LGBT people.

I was totally delighted by it! It is fantastic.

The plan. Creating a path for the next middle class.

We want to end poverty-wage work in America. That is our number one agenda. We are bound and determined to make sure that minimum wage underpaid service and care workers, fast food, janitors, airport workers, home care workers, childcare workers can use collective bargaining to create a path to the next American middle class. In that agenda, we fight for healthcare for all, we fight for citizenship for immigrants, we fight for racial justice for the black community, but I think what galvanizes us across all of our differences is ending poverty. ♦