The Irish Hunger Memorial was re-opened in late July 2017 after a year-long, $5.3 million renovation. The structure had suffered extensive water infiltration, particularly from 2012’s Hurricane Sandy, which it had not been equipped to handle in its original state. The restoration cost $4.5 million more than the initial placement of the structure, which was unveiled to the public in 2002 in an evocative launch by former Irish president Mary McAleese.

The memorial is a reconstruction of a cottage painstakingly transplanted from Ireland set amidst a structure reminiscent of a passage tomb and covered with Irish flora. The cottage, dating back to the 1820s, originally belonged to the Slack family of Attymass, County Mayo, one of the first areas to be struck by the tragic potato blight of the mid-1800s. The edifice stands in Battery Park City and the landscape it rests on was designed by artist Brian Tolle, a relative of the Slacks. 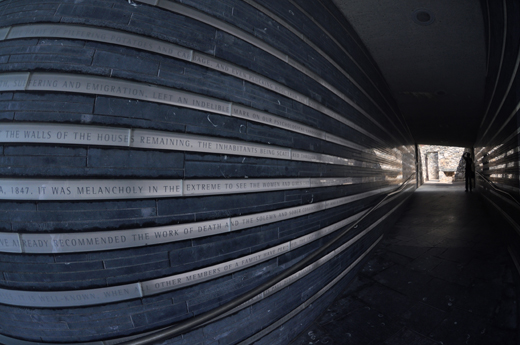 “The plants are Irish; the stones are Irish,” Battery Park agricultural director Anne O’Neill recently told Kristin Shaughnessy for NY1. “All these stones came from different counties. It is for anybody who comes from Ireland, directly or indirectly – you can go find your county stone.”

The memorial also conveys a global message, according to Maureen Murphy, the memorial’s historian, who told Shaughnessy, “We don’t have a corner on world hunger, so it’s to remind us of hunger and homelessness,” adding that the 200-year-old Irish cottage illustrates “that we do live in one another’s shadow, and we are responsible for each other.” ♦