President of Ireland Michael D. Higgins and his wife, Sabina, visited New York in late April. The trip saw him address the United Nations General Assembly and meet with senior international officials, as well as pay visits to several of the city’s Irish cultural institutions, including the Irish Arts Center and Ireland Funds.

During his U.N. address, Higgins discussed the shame of how, in the 21st century, nations are creating situations that harm civilians more than ever, asking, “is it not nothing less than a moral outrage that our boundless capacity for creativity and innovation, and the fruits of new science and technology, are turned, not to the promotion and preservation of peace, but to the pursuit and prosecution of war?” He also reflected on the Good Friday Agreement, which U.N. President Miroslav Lajčák identified as “essential for successful peacebuilding” and reiterated his support for the U.N.’s founding principles. 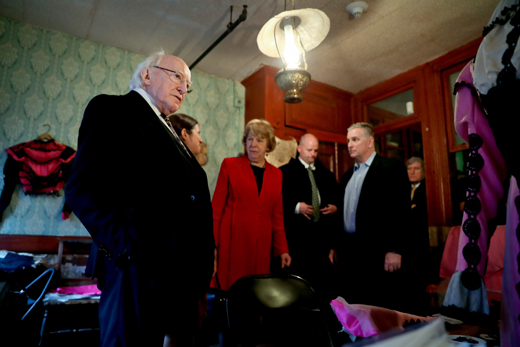 Higgins and his wife, Sabina, at the Tenement Museum. (Photo: Maxwell’s)

President Higgins also tackled the issue of women’s rights at the Ireland Funds’ Women in Leadership Series, where he spoke about Ireland’s failure to acknowledge women’s voices, noting the “false dawn” of Countess Markievicz’s election as a cabinet minister in 1919. Though she was the first democratically-elected female minister anywhere in the world, it would be another six decades for Ireland to elect a second.

“For too long during our 100 years as an independent Irish State, the voice of women in Irish political life was marginalized, ignored, or silenced,” he said.

In reference to the United States, he also expressed his concern about the current gender climate.

“Indeed, today we are witnessing a worrying surge of unapologetic sexism and the undermining of women’s rights in one of the world’s most advanced democracies.”

His visit concluded with visits to New York’s Tenement Museum, St. Barnabas Rectory, and the Rockland Gaelic Athletic Association, the largest G.A.A. club outside of Ireland. ♦