The deck of the SS Nomadic at Titanic Belfast. SS Nomadic is a former tender of the White Star Line, launched on 25 April 1911 in Belfast. (Photo: Shutterstock / Courtesy O’Brien Press)

An excerpt from Titanic: True Stories of her Passengers, Crew and Legacy by Nicola Pierce explores three locations notable to the Irish links to the Titanic. 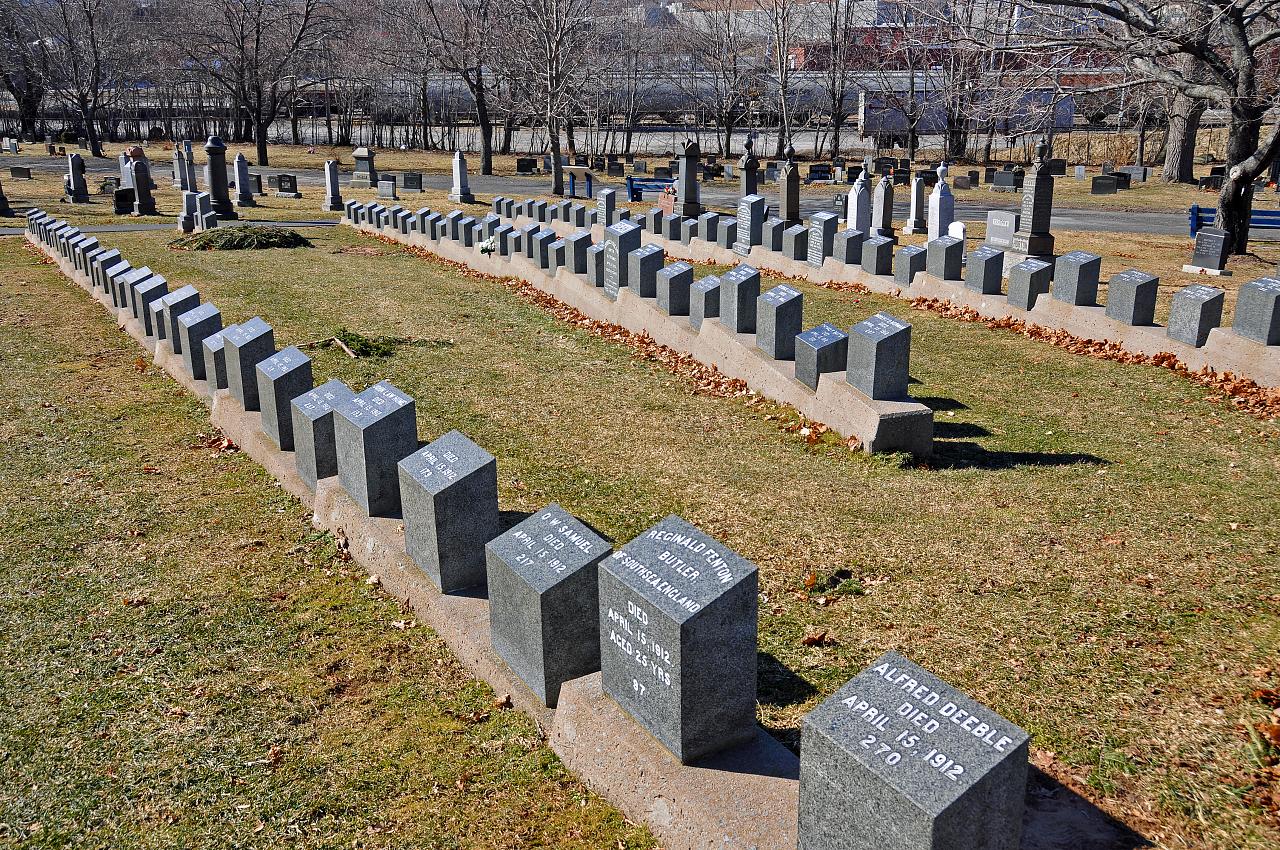 It was White Star Line who paid for the headstones that went up during the autumn of 1912. The Titanic bodies, those not claimed by relatives, were divided between three different graveyards, the biggest share going to the Fairview Lawn Cemetery. Here, 121 bodies are buried with 42 remaining unidentified. A gentle sloping of the ground made it necessary to lay the headstones out in three curved lines, reminiscent of the curve of a ship’s bow.

One of the Titanic occupants is Jack Dawson whose grave, thanks to Leonardo di Caprio’s fictional namesake in the 1997 film Titanic, perhaps rivals Jim Morrison’s grave in Père Lachaise with hundreds of visitors leaving flowers and trinkets around it.

The second graveyard, the Mount Olivet Catholic Cemetery’s Titanic plot contains 19 victims, including Mrs Margaret Rice from Athlone, Ireland, who was travelling with her five young sons, none of whom were ever found. Four victims were never identified. 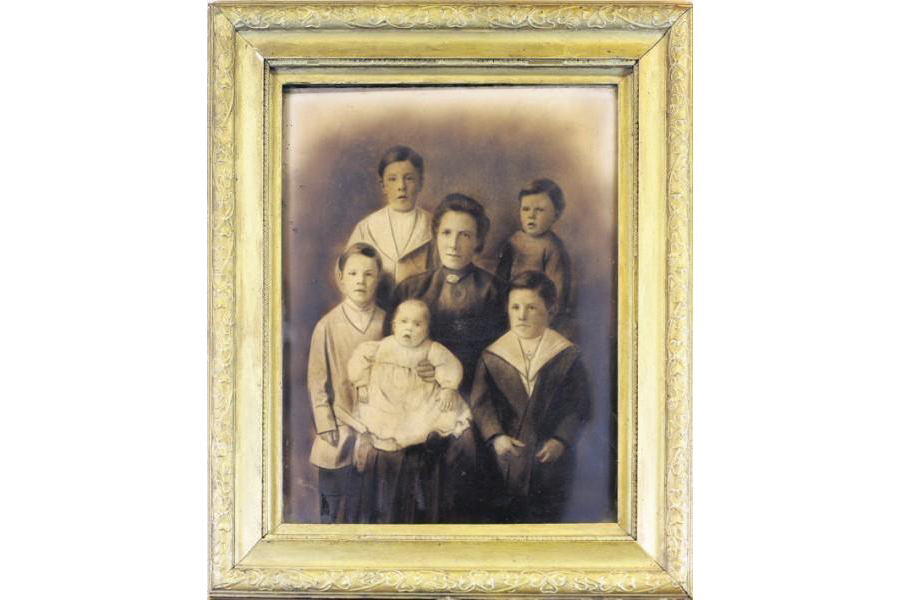 Margaret Rice and her five sons, all of whom died in the Titanic. Only Margaret’s body was recovered. (Photo: Titanic Experience Cobh)

The third graveyard is the Baron de Hirsch Jewish Cemetery which holds ten Titanic victims. Out of the ten, only two were ever identified. Here lies Michel Navratil, the father who absconded from France with his two young sons but at least got his children safely into a lifeboat. He had boarded Titanic under the name of Louis M Hoffman. 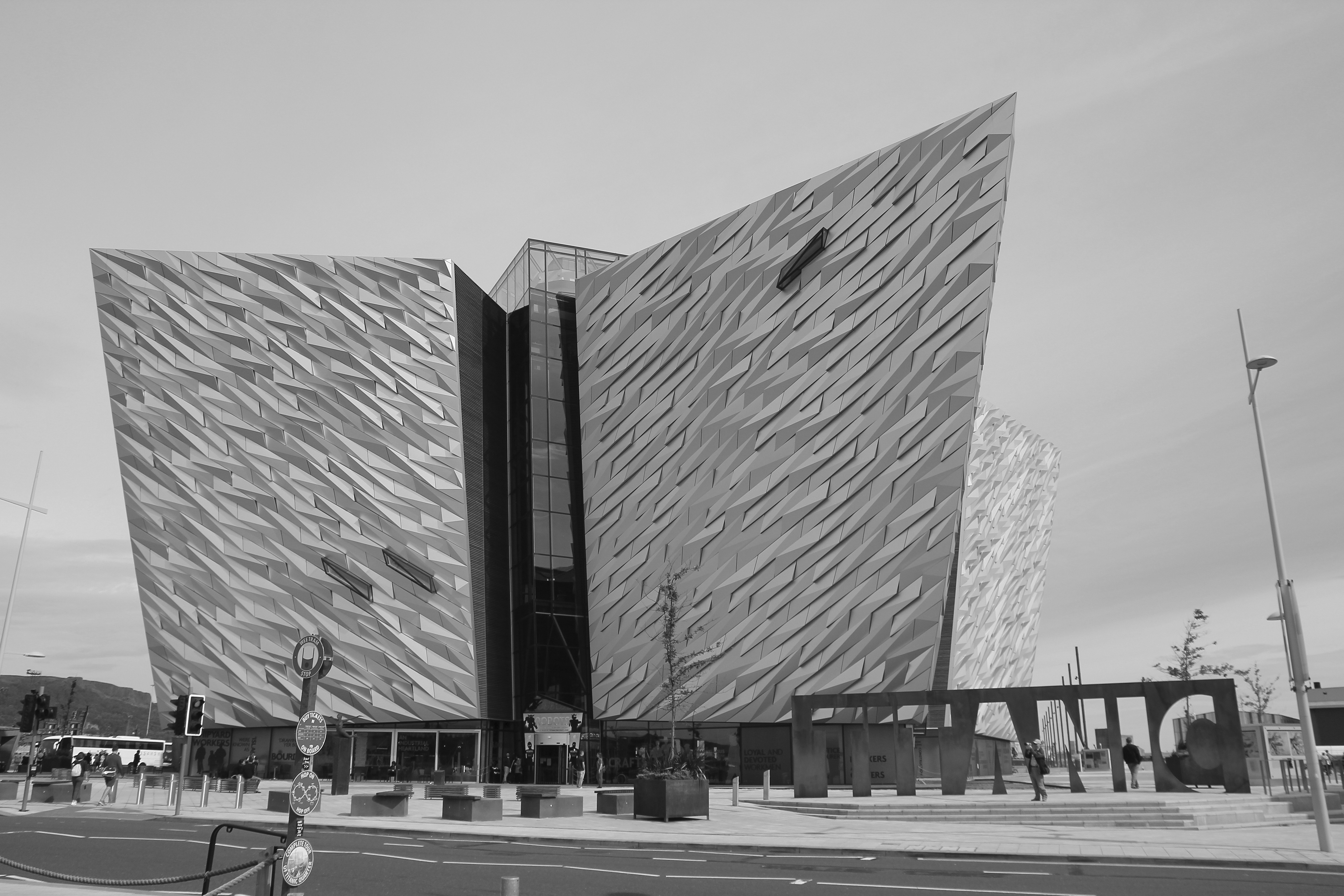 The Titanic visitor centre, located on the very slipways where Titanic was built at the heart of Belfast. (Photo: Shutterstock / Courtesy O’Brien Press)

Belfast Lough watched the building of Titanic and today the lough plays witness to her legacy. Since it opened in March 2012, Titanic Belfast has welcomed over three million visitors from all over the world. In December 2016, Titanic Belfast won a million votes worldwide, beating the Eiffel Tower, Giant’s Causeway and everything else to become the World’s Leading Tourist Attraction. Unfortunately, the designer, Texan Eric Kuhne, had suffered a fatal heart attack a few months previously, but he left behind the most wonderful narrative of a century’s worth of Belfast’s shipbuilding history.

On approaching Titanic Belfast, one is immediately captivated by its shape and texture. From above, the building is star-shaped, with four prongs that, seen from the ground, makes one think of a ship’s bow and hull. The four sides of the museum shimmer in the sun, to remind us of frozen water crystallising and forming deadly but beautiful icebergs. So, yes, we note the ship’s bows, all four of them, but also, we are to think of the immense Arrol Gantry, the superstructure that housed the births of Olympic and Titanic. In fact, those four sides represent the four ages of shipbuilding in Belfast – Wood, Iron, Steel and Aluminium. You can see the slipways out back; visit at night and the outlines of the two ships are lit up in blue, your imagination fills in the rest.

Keep in mind that eight lives were lost here, during Titanic’s construction, the very first being fifteen-year-old catch-boy Samuel Joseph Scott who fell twenty-three feet from the side of Titanic to his death on 20 April 1910. Water surrounds the museum, like a medieval moat, reflecting the futuristic triangles, each one unique, that form the outer husk of the building, along with nature’s finest, the Belfast sky.

Follow Titanic’s route in the pavement outside. Rest yourself on a bench, not one of them is randomly placed, instead they form the dots and dashes of Titanic’s distress call, SOS CQD, in Morse code. Out front there is the giant ‘Titanic’ sign, reminiscent of Los Angeles’ ‘Hollywood’, cut from the same 2.5 cm steel plate that was used to build the ship. Goodness knows how many photographs it has appeared in.

Inside, the entire story of Titanic, Olympic and Belfast is encapsulated across six floors that are stacked like the decks of a ship. Be warned, time will fly. On a busy day, the noise can be tremendous and it is easy to be distracted by the cafes, the shop and sheer crowds milling around the atrium, queuing for tickets, collecting tickets or waiting for their premium tour to commence. A variety of languages and accents reminds you of the different nationalities that crop up in the list of passengers and will also impress upon you how many different people are still gripped by this ship of dreams. And, yet, this is just a building, a massive museum made over to the ghosts of a maiden voyage that lasted barely five days but it works. You can join the queues to gaze at the Mona Lisa, the Colosseum, the Vatican and the battlefields of the two world wars while the reason for this museum is two and a half miles down at the bottom of the Atlantic. And yet she is here, in spirit, along with her crew and passengers, as, deck by deck, you make your way deeper into the story.

Titanic and Olympic represented the pinnacle of shipbuilding’s finest hour and perhaps one can say the same about Titanic Belfast. 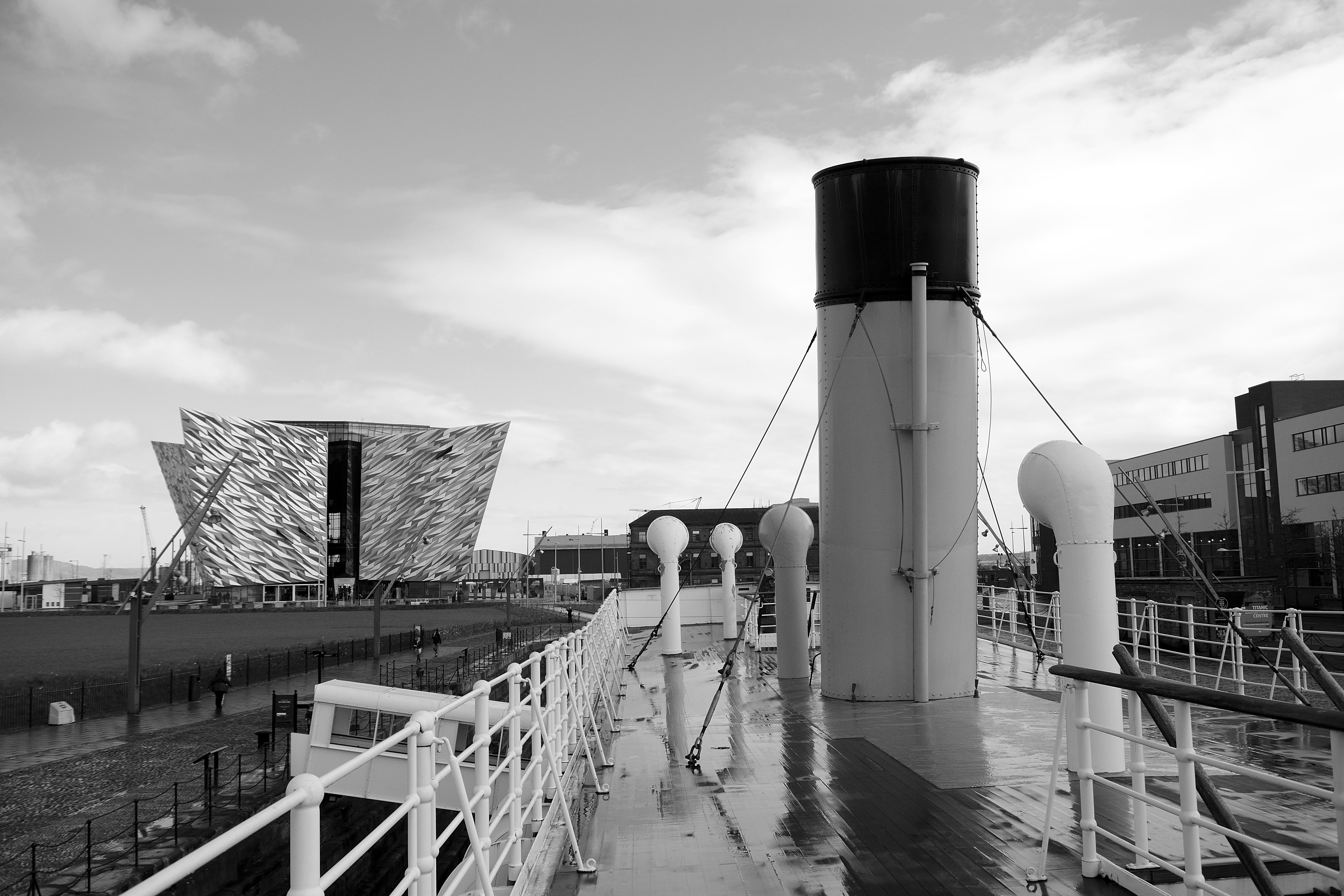 The deck of the SS Nomadic at Titanic Belfast. SS Nomadic is a former tender of the White Star Line, launched on 25 April 1911 in Belfast. (Photo: Shutterstock / Courtesy O’Brien Press)

Designed by Thomas Andrews, the SS Nomadic, a White Star Line tender, came into being on Slipway no. 1, in 159 days, in the shadow of her neighbour, the immense Arrol Gantry housing the potentials that would be Olympic and her younger sister. The Nomadic was launched on 25 April 1911 to carry passengers, their baggage and mail to and from Olympic and Titanic. Over a century and more than one renovation later, she’s an integral part of the Titanic Experience in Belfast today. Indeed, it is quite something to step aboard one of the two ships, the other being SS Traffic, that ferried Titanic’s first and second-class passengers out to her from Cherbourg harbour.

Approximately 274 passengers stepped onto the Nomadic on 10 April 1912, perhaps impatient to exchange the little ship for the biggest and grandest ship the world had ever seen. However, the Nomadic was no ‘plain Jane’, and carried plenty of decorative extras like cushioned benches and porcelain water fountains, for the likes of the Astors, the Duff-Gordons and Benjamin Guggenheim.

During the war, she ferried a different class of people – American soldiers – under her new employer, the French government, who also sent her out on minesweeping and patrol duties. After 1918, she was a tender once more and, in 1927, was sold to Compagnie Cherbourgeoise de Transbordement. Seven years later, she was sold to the Cherbourg Tow and Rescue Service and renamed Ingenieur Minard.

The Second World War saw her helping to evacuate Cherbourg before moving to Portsmouth Harbour for a new employer, the Royal Navy, where she resumed previous military duties: transporting soldiers, patrolling waters and minesweeping. But she would see Cherbourg again after war damage ensured that ships could not dock at the harbour and a tender was required once more. She was retired in 1968 and lay around for five long years before embarking on a rather glamourous role, for new owner Yvon Vincent, as a floating restaurant, a party vessel, in the Seine, Paris.

She needed rescuing after Vincent’s death in 2005, to divert her from the scrapyard; and rescued she was, thanks to a marvellous effort by enthusiasts such as the Belfast Titanic Society, the French Titanic Society and the Save Nomadic Appeal, whose hard work paid off when in 2006 Northern Ireland’s Department for Social Development stepped in to buy the Nomadic for £25,001. She returned to Belfast, her birthplace, in dire need of a complete revamp, and the Nomadic Charitable Trust, her new owner, was created to oversee the job. Once transformed she was handed over to her current owner, the Titanic Foundation, in April 2015. She is a genuine piece of Titanic and White Star Line history. 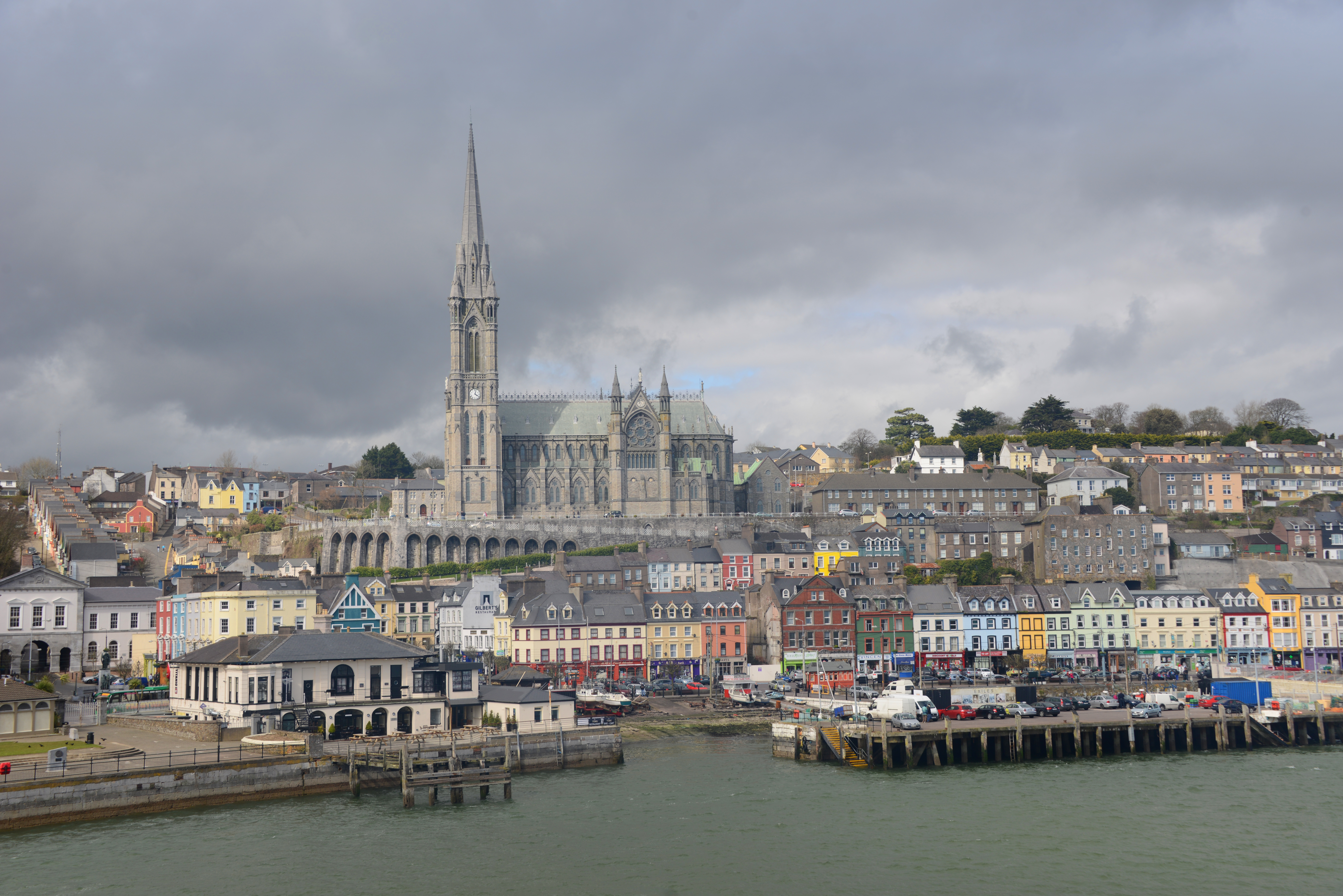 The Titanic Experience Cobh, left, with the pier from which passengers last departed land. In the background is Cobh’s St. Colman Cathedral. (Photo: Monster4711 / Wikimedia Commons)

Recipient of the 2015 Trip Advisor Certificate of Excellence, this little museum can be found in Casement Square, just past the promenade.

The building dates back to the early nineteenth century and was the original White Star Line ticket office where Titanic’s final passengers queued up on 11 April 1912. Of the 123 passengers waiting to be ferried out to Titanic at Roche’s Point, 79 would lose their lives in the sinking.

The museum focuses on the Queenstown passengers and the tour includes the original White Star Line pier, also known as Heartbreak Pier, which was immortalised in Father Browne’s famous photograph (see page 142).

A few minutes’ walk away from the museum is the memorial garden in Cove Fort. Opened in 2013, the garden looks out onto Roche’s Point and includes a wall of glass bearing the 123 names.

There is also a memorial stone, given to Cobh by Mrs Florence Ismay, wife of White Star Line director Bruce Ismay, which came from their garden in Costello Lodge, Connemara, County Galway.

Furthermore, there is a great tribute to Titanic in Cobh Heritage Centre, located within Cobh’s restored Victorian railway station. It is well worth a visit. Aside from Titanic, the centre also explores the stories behind the thousands of Irish who left behind their homeland as a matter of necessity during the Irish Famine, or otherwise. Between 1845 and 1851, over a million people emigrated from Ireland, including young Annie Moore who was the first emigrant to be processed in Ellis Island, New York.

There is also the Lusitania exhibition, a reminder that Cobh has links to more than one shipping disaster. When a German submarine torpedoed the Cunard liner, RMS Lusitania, twenty kilometres off the coast of the Old Head of Kinsale, on 7 May 1917, there was not enough time to launch most of the lifeboats. In fact, only six boats were launched as it took just eighteen minutes for the ship to sink with the loss of over eleven hundred lives. Hundreds of bodies were taken out of the water, while others would be washed up on Cork’s shores over the following weeks. Cobh’s local boat owners made a valiant effort to save as many people as they could, but the tragedy all happened so fast. Today, you can visit the Old Church Cemetery, on the outskirts of Cobh, where the remains of 193 Lusitania victims were laid to rest. ♦ 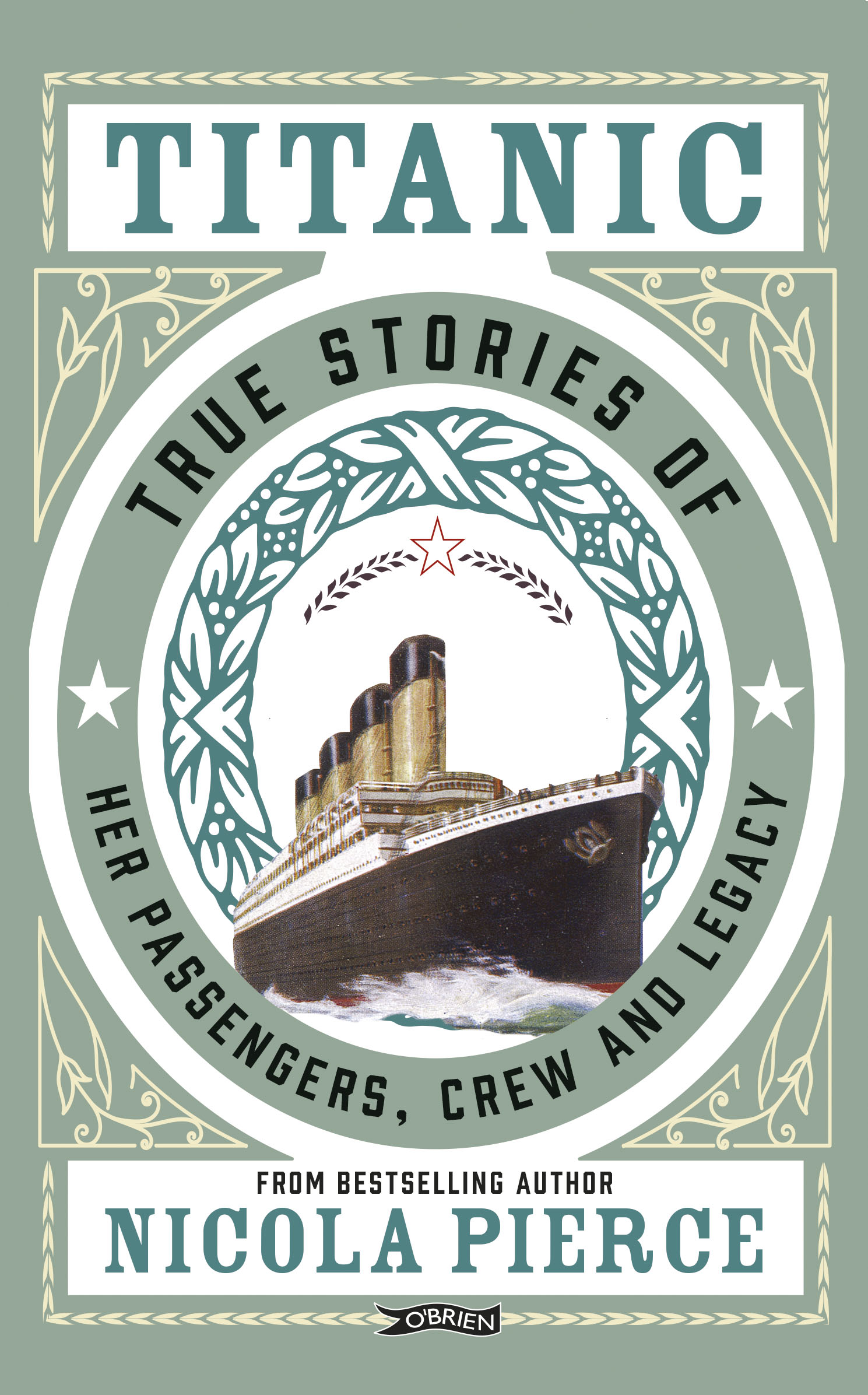 Nicola Pierce published her first book, Spirit of the Titanic, to rave reviews and five printings within its first twelve months. City of Fate, her second book, transported the reader deep into the Russian city of Stalingrad during the Second World War. Behind the Walls, a rich emotional novel set in the besieged city of Derry in 1689 was followed with a companion novel, Kings of the Boyne, also set in the seventeenth century during a defining moment in Irish history. Nicola was born in Tallaght and now lives in Drogheda.

One Response to “The Titanic’s Irish Legacy”