The Life of Brian

Known for his roles in the Academy Award-winning film The Hurt Locker and the HBO series Boardwalk Empire, Brian Geraghty stars in TNT’s new drama The Alienist, which premiered on January 22, and credits his success to his dad.

From an early age, actor Brian Geraghty, who has appeared in two dozen movies, including The Hurt Locker and Jarhead, as well as acclaimed TV shows like Boardwalk Empire and Ray Donovan, knew being Irish was a pretty big deal.

“Man, for my dad, I think St. Patrick’s Day was bigger than Christmas,” Geraghty declares with a laugh during a recent phone interview with Irish America. He was speaking from Los Angeles, where the night before he had attended the premiere of his latest project, the TNT TV mini-series The Alienist. Set in 1890s New York City, The Alienist is an atmospheric murder mystery based on Caleb Carr’s best-selling novel of the same name. Geraghty plays Theodore Roosevelt, from his days as the crusading police commissioner of New York before he went on to serve as vice president and president. Shot in Budapest, The Alienist also stars Dakota Fanning, Daniel Brühl, and Luke Evans and has earned strong reviews, with USA Today calling it a “creepy good time.”

“As a period drama, this is just done so well, and the historical aspect of this is really interesting,” says Geraghty. “At the end of the day, we have a really compelling story to tell.”

The Alienist is just the latest in a string of strong TV performances for Brian Timothy Geraghty, now 42, who grew up in Toms River, New Jersey. His family not only made annual trips to his town’s St. Patrick’s Day parade, but also crossed the Atlantic in 2004 for a family reunion in Ireland. They started in Dublin before visiting Knockcroghery, County Roscommon, from where his family hails and where these Jersey Irish Americans caught up with a bunch of cousins still living there.

“They were so welcoming. They were so eager to show us around. Every pub we went into there, someone would point to someone and say ‘He’s your cousin, too,’” he says. “And the scenery is unparalleled.”

Another high point, fittingly for this actor, was a theater festival in Galway, where Geraghty was able to catch a performance of J.M. Synge’s Playboy of the Western World. “My dad was always a real big proponent of staying in touch [with your roots],” adds Geraghty, who took an emotional pause to add that his father passed away in 2014. 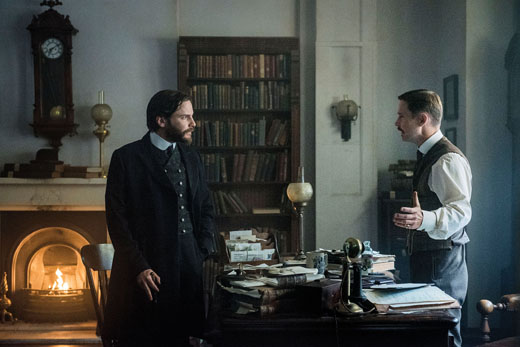 It was also Geraghty’s father who recognized that teenaged Brian was not cut out for a traditional college or career path.

“When I was in high school, I was not doing very well. My dad was creative – he was in advertising.  And he kind of knew during my senior year in high school that I should be doing something different,” he says. “My dad loved the theater. When I was 17, I started to think, ‘I really like acting.’”

Geraghty gave himself a crash course in Hollywood, binging on classics like The Godfather and The Graduate. Suddenly, actors like Ed Harris were jumping off the screen, providing valuable tips and guidance to this budding thespian.

“Then you start to develop your own instincts,” says Geraghty. “And my dad really pushed me. He said, ‘You need to do this. If you like it, do it.’”

Also instrumental for Geraghty was seeing the Oscar-winning film Dead Man Walking at 19. “Sean Penn blew my mind. And I thought, ‘I wanna do that.’”

One of Geraghty’s first serious auditions was for a cable drama that had not yet made it to the air. It was called The Sopranos, and he eventually landed a tiny role on what would become a historic series. But after that? Not much. “There were a couple of tough years,” Geraghty admits.

Still, movie roles came, if slowly. He portrayed an Irish American marine, Fergus O’Donnell, in the gritty 2005 war flick Jarhead. The following year, Geraghty had a role in the Robert Kennedy movie Bobby, which earned a Screen Actors Guild nomination for Outstanding Performance by a Cast. And he was part of another outstanding cast – and Oscar-winning movie – when he appeared in 2008’s Best Picture The Hurt Locker. 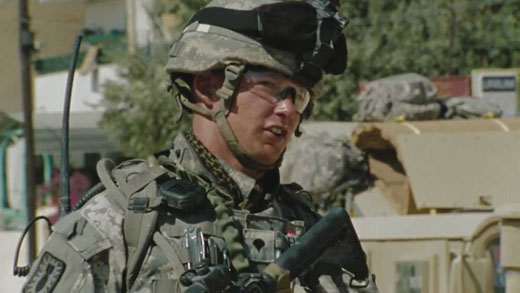 Meanwhile, as Geraghty was catching on in the movie business, he caught a break with the rise of so-called “peak TV.” Suddenly, high-quality TV shows were being taken as seriously as movies.

Geraghty played a crusading cop who goes undercover to expose Thompson and his cronies.

“That was life-changing for me,” Geraghty says of Boardwalk Empire. “I wish I could have done that show for five years.” The ensemble cast earned Geraghty another Screen Actors Guild nomination and helped him secure a role on another critically-acclaimed show with heavy Irish leanings. Geraghty played Detective Jim Halloran on the second season of Showtime’s Ray Donovan, about a family of Boston Irish tough guys who relocate to the West Coast. More recently, he has appeared regularly on NBC shows such as Chicago P.D., Chicago Fire and Chicago Med.

Geraghty’s latest TV project, The Alienist, looks at the dark side of street life in late 19th century New York. The show revolves around Dr. Laszlo Kreizler, who uses cutting-edge investigative techniques to try to solve a string of gruesome murders. Geraghty read books such as Richard Zaks’ Island of Vice to research his role as reform-minded police commissioner Roosevelt.

“What we didn’t want was the Theodore Roosevelt we know, the guy on Mount Rushmore,” Geraghty says. “We wanted a guy on the way up, which was a little more challenging.”

Irish immigrants also play a key role in The Alienist, with Dr. Kreizler and his pals bumping heads with Irish cops and politicians, who have finally achieved positions of power after decades of poverty and discrimination. The Alienist premiered in January and runs through March on TNT.

Looking ahead, it’s back to the movies for Geraghty, who appears alongside fellow Irish American Kate Mara in the romantic drama My Days of Mercy, which recently screened at the Toronto Film Festival. Then there’s Extremely Wicked, Shockingly Evil and Vile, in which Geraghty stars alongside former teen heartthrob Zac Efron, who portrays notorious serial killer Ted Bundy.

“I’ve been really lucky,” concludes Geraghty, assessing his career at this point. It’s a good thing he was able to make a name for himself in Hollywood he adds with a laugh. “I don’t know what else I would have done anyway.” ♦