A sample form that includes a write-in category for those who check "White" on the race category in the upcoming 2020 Census.

American citizens who check “White” on the U.S. Census will be allowed to expand on their ethnicity for the first time in the upcoming 2020 census. In an effort to establish a more comprehensive understanding of American heritage, the Census Bureau has announced the addition of a write-in box in which citizens can fill out their origins and cultural associations more precisely. The change is being made in response to a nationwide “call for more detailed, disaggregated data for our diverse American experiences as German, Mexican, Korean, Jamaican, and myriad other identities,” according to the bureau’s recent Race and Ethnicity Analysis Report. There will be a similar write-in option for the “Black and African American” category as well. 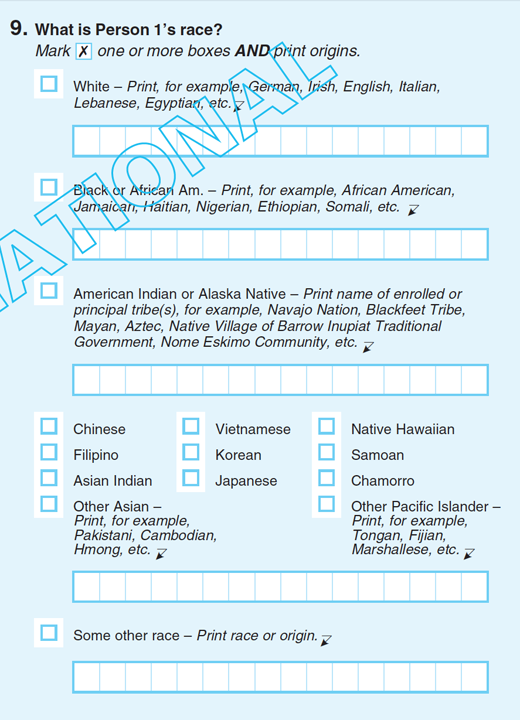 View the entire document with DocumentCloud via NPR.

The new, more detailed data on American ethnicity as a whole could potentially reveal a whole host of Americans of Irish descent that were previously unknown as such. The Irish American demographic has declined in recent years, dropping from 2009’s 36.9 million (accounting for over 15 percent of the American population) to 2015’s record low of 32.7 million (just over 10 percent). However, access to options of ethnic diversity in the census questionnaire could possibly provide a less dismal conclusion. Julia Clear, a member of the New York Irish Center in Queens, questioned the 32 million statistic in an interview with NPR. “Is that accurate?” she asked, “Or is there a heck of a lot more of us out there?” We’ll see in 2020. ♦

One Response to “New, Expanded Categories in the 2020 Census Questionnaire”