The glorious The King and I overture reaches a crescendo, filling Lincoln Center’s Vivian Beaumont theater with some of the greatest music ever written for the theater played by world-class musicians. Then, a giant sailing ship moves across the stage into the audience. Gasps. And yet it’s when, in the words of New York Times critic Ben Brantley, “the determined, hopeful, anxious woman in the hoop skirt” runs on deck that applause rocks the place. “Her name is Anna Leonowens and she is played, you lucky theatergoers, by Kelli O’Hara.” Lucky indeed, as most of us there that day know. We are fans of the amazing performances she has given on Broadway since her debut in 2000, as a replacement in Jekyll and Hyde.

In 2005 O’Hara was nominated for Best Featured Actress in a Musical for Light in the Piazza, with subsequent nominations for The Pajama Game (2006), South Pacific (2008), Nice Work if You Can Get It (2012), and The Bridges of Madison County (2014). Now her Anna will send critics scrambling for superlatives and earn her the Tony Award for Best Actress in a Musical. O’Hara gave an all-time great Tony acceptance speech complete with a rendition of a dance called “the worm.” And she looked right at her mother and father as she thanked them. “To my parents who are sitting next to me for the sixth time, you don’t have to pretend. It’s okay this time. Thank you for giving me roots.” 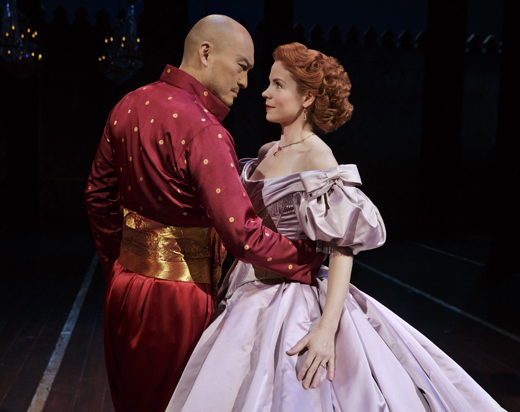 Kelli O’Hara and Ken Watanabe in The King and I. (Photo: Paul Klonik)

She talked to me about those roots.

“I’m proud to be Irish,” she said, though she grew up far from the usual Irish American centers. “I was born and raised in Oklahoma. My mom’s side of the family, the Husband family, came during the land run and settled in western Oklahoma.” (The land run started at high noon on April 22, 1889, with 50,000 people dashing for their piece of the two million acres opened for settlement.)

The O’Hara side initially came to the U.S. around 1850, living in Iowa, Missouri, and Colorado, where O’Hara’s great-great-grandfather did well with horses and farming. But soon, Ireland called again and he returned. “My great-aunt, who was then in her 90s, told me the story,” O’Hara says. “He went back to Ireland, either to get his family or to live there with his newfound wealth, but he was actually forced to leave. Something happened and he had to take his family and nothing else and escape at night.” Her great-grandfather, Peter, was born during that brief time back, but the family returned to America.

As adults, Peter and his brothers, James and Michael, split off to find land. They landed in western Oklahoma in 1909, just two years after statehood, settling first in Mangum, where O’Hara’s grandfather was born, and later in Elk City, near the Texas panhandle, where they acquired a farm. 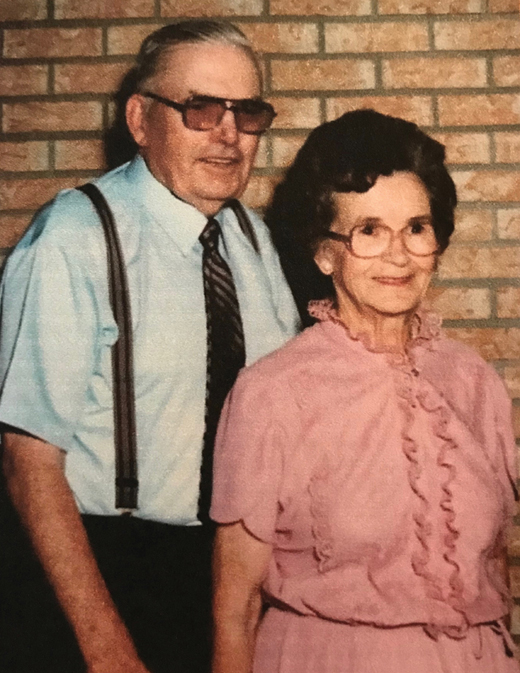 “We still farm the land that they found. My dad’s brother Robert lives on the original farm. My father and brother are both Patrick O’Haras. Our family has a long wonderful history of Irish lineage.” Her father and mother were both born and raised in Elk City, as was Kelli herself, and to date, six generations of O’Haras have lived on the land.

“We do have one precious possession that’s been handed down. It’s an Irish cookbook that we use all the time. On the cover, written in Irish, is Ó hEaghra – O’Hara,” she says.

“My father named me Kelli because ‘Kelli O’Hara’ just sounded so Irish. Even growing up in the middle of America, I felt grounded because I had such strong roots. We were living in the town where my grandfather had grown up. There were a lot of O’Haras from those three sons – James and Peter and Michael – many, many cousins.” 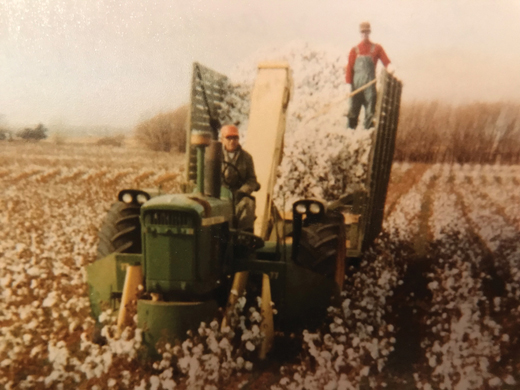 O’Hara’s grandfather, for whom she wrote “Here Now,” drives a tractor on the family farm. Standing behind in the cotton trailer is Archie Dye, who helped work the land with the O’Haras.

Kelli captured her family’s early struggles in a song she wrote and performed in special concert at New York’s Sheen Center last October. The lyrics tell the story of her grandfather, George O’Hara:

Here now the wind is blowing
Red dust and it settles like me
Here now no place to be going
But the place I’m dying to be.

And what sustained her grandfather? His sweetheart Marie of course:

I believe in blue skies
And the shy Irish eyes
Of the girl who is marrying me.

Growing up, Kelli found her sustenance in music. “There was singing in church and at weddings,” she remembers. “We were Catholics in the Baptist Bible Belt. Our church, St. Matthew’s Catholic, was central to our lives. I grew up singing in church and I loved it. I went to Oklahoma City University where my teacher, Florence Birdwell, helped me think outside the box. When I graduated, I could have gone on to grad school or studied more music, but I eventually found myself packing two suitcases with no clue and moving to New York City. I think it scared my parents a lot, but they put me on that plane. I just had a feeling that if I didn’t try I would never forgive myself. Somehow I wasn’t even afraid. But then, look at my great-great-grandfather and all the Irish who headed out into the unknown. When I read Frank McCourt’s Angela’s Ashes, I thought, ‘I know these people.’ I understand their humor, their endurance, their strength. 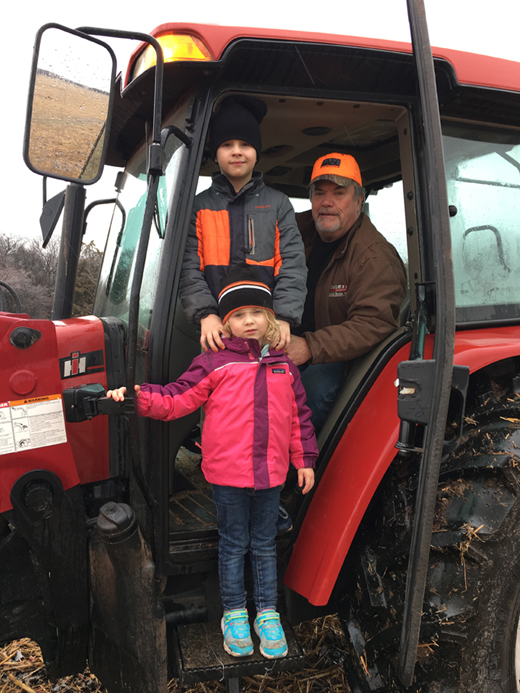 O’Hara’s children, Owen and Charlotte Naughton, with her father, Pat, on his farm.

“When you go to acting school, everyone wants you to say what your big problems are so you can weep. But I’m not going to lie about the fact that I had a good childhood. I had two sets of grandparents in my little tiny town and I walked barefoot down the street and everyone knew whose daughter I was. I’m proud of that and I’m using it. I suppose there are a lot of reasons to be jaded or sarcastic or bitter in life. But I hang on to the reasons why life is beautiful. It helps to have a history to think about, to remember those who came before you, to help you be in this place. I feel very fortunate. I don’t feel held down, or that I need to create angst in order to be a good artist. I feel like my artistry comes from the things I do believe in. I’m very happy. I was glad to play Nellie Forbush in South Pacific, this cock-eyed optimist person, who was also a professional woman, a nurse, liberated for her time. But liberated doesn’t mean that you don’t fall in love and that you don’t lose control of all sense of anything. It’s something I’ve struggled with before, to find that openness. But once you allow it to happen and you really believe in it, nothing feels better. When you actually allow yourself to just be grateful. I feel that way especially about my husband, Greg Naughton, and our two children. And he’s Irish. I felt like I knew him somewhere before. Maybe somewhere back in Ireland, something aligned. He’s a great person. We’re happy. He’s been very encouraging to me and was instrumental in helping me with my CD Wonder in the World that I did with Harry Connick, Jr.” 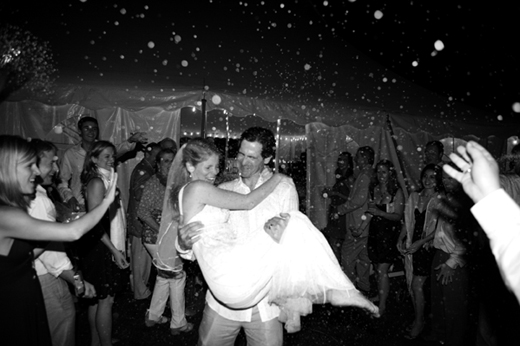 O’Hara is very aware of connections between her projects and what’s going on in the world. “When we did South Pacific, Barack Obama was running for president, and it was a story focused on race. When we were first doing The King and I, Hillary Clinton was running for president, and we saw a chance to tell a story about feminism.” When Anna gives a copy of Uncle Tom’s Cabin to the King of Siam’s youngest wife, she reads it and rebels, unwilling to remain a slave. Director Bartlett Sher said that his interpretation of The King and I was inspired by the thought that even in our present world, the thing terrorists fear most is a girl with a book. To underscore this point, the Nobel lecture written and delivered by Malala Yousafzai, who as a 15-year old was shot for going to school by the Taliban in Afghanistan, is featured in the The King and I issue of the Lincoln Center Theater Review. 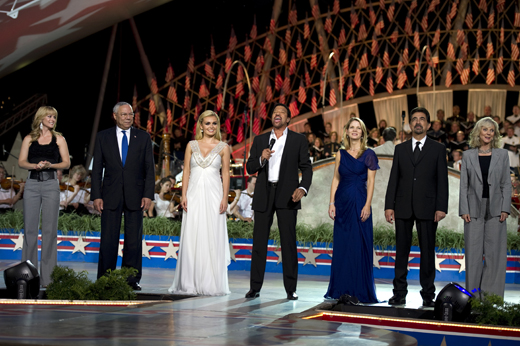 The heroines O’Hara chooses to play echo Irish heroines of the past – Queen Maeve, who led armies; Grace O’Malley, the pirate queen of Connacht; and perhaps one of O’Hara’s own female ancestors, walking the hills of Clare and singing along the way. I thought of this as I watched Kelli in Brigadoon. It was my birthday and I was lucky to get a last-minute ticket, and once again marveled at how she can reinvigorate classic American musicals. Maybe the mythical village is Scottish, but Fiona is Irish as she sings about waiting for her dearie, and the dream she is unwilling to compromise. It’s easy to believe that O’Hara could expand a miracle and bring the town of Brigadoon alive again.

Next, O’Hara will appear as Despina in the Metropolitan Opera’s production of Mozart’s Cosi Fan Tutte, disproving the premise of a number she does in her concert – “They Don’t Let You in the Opera if You’re a Country Star.” Interestingly, it’s Phelim McDermott, born in Manchester, England, of Irish descent, who set the opera in 1950s Coney Island and will be directing. 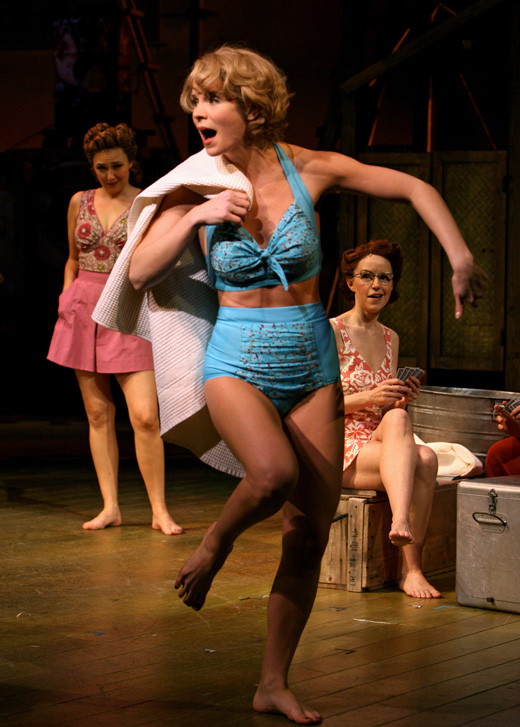 O’Hara remembers her first glimpse of Ireland. “It was the most surreal experience, because I’ve always wanted to see the countryside of Ireland. I was coming from London and it was winter and there was a storm here in New York City that kept the plane from crossing the Atlantic­. We were diverted to Shannon Airport. It was kind of a scary moment – they took us to this hotel in the middle of nowhere. It was dark, late at night. It was about two years ago. I sat with several Irish couples and they told me about Ireland and how they grew up. They were about my own age. I had a pint and went to bed. And when I woke up, I looked out the window and I was in the middle of the Irish countryside. There were rock walls and sheep and rolling green hills. It seemed unreal because it was so what I’ve imagined. You know when you go to a country and imagine what it will be but it’s not, it’s just like New York City? Well, this was as I’d imagined. Then they took us back on a bus and I flew away. It was almost like I’d been magically transported to an essential version of Ireland. Later I found out that I’d been looking out at the hills of County Clare where the O’Haras are from.”

So maybe the ancestors were calling Kelli O’Hara back to where her heart has ever been.

Don’t miss this year’s Hall of Fame Luncheon, taking place on March 14th at the Pierre in New York City! Seats and tables can be purchased here, and view Kelli O’Hara’s remarks and performances at last year’s luncheon below.

This article was published in the April / May 2018 issue of Irish America.  ♦