John Owen Brennan’s 29-year career with the Central Intelligence Agency was spectacular. He was director of the agency from March 2013 to January 2017 and prior to that, his career included stints as intelligence briefer for President Bill Clinton, top deputy to CIA director George Tenet, director of the National Counterterrorism Center during George W. Bush’s presidency, and chief counterterrorism advisor to President Barack Obama.

Brennan has also worked as a Near East and South Asia analyst, as station chief in the Middle East, and, outside the CIA, had a brief stint in the private sector as chairman of the Intelligence and National Security Alliance and CEO of The Analysis Corporation.

Since his retirement from the CIA, Brennan’s public face is most often that of the solemn commentator – ever skeptical, ever alert, with no penchant or patience for hyperbole. And in today’s climate of acute partisanship, he is resolutely independent, describing himself simply as a “nonpartisan American who is very concerned about our collective future.” 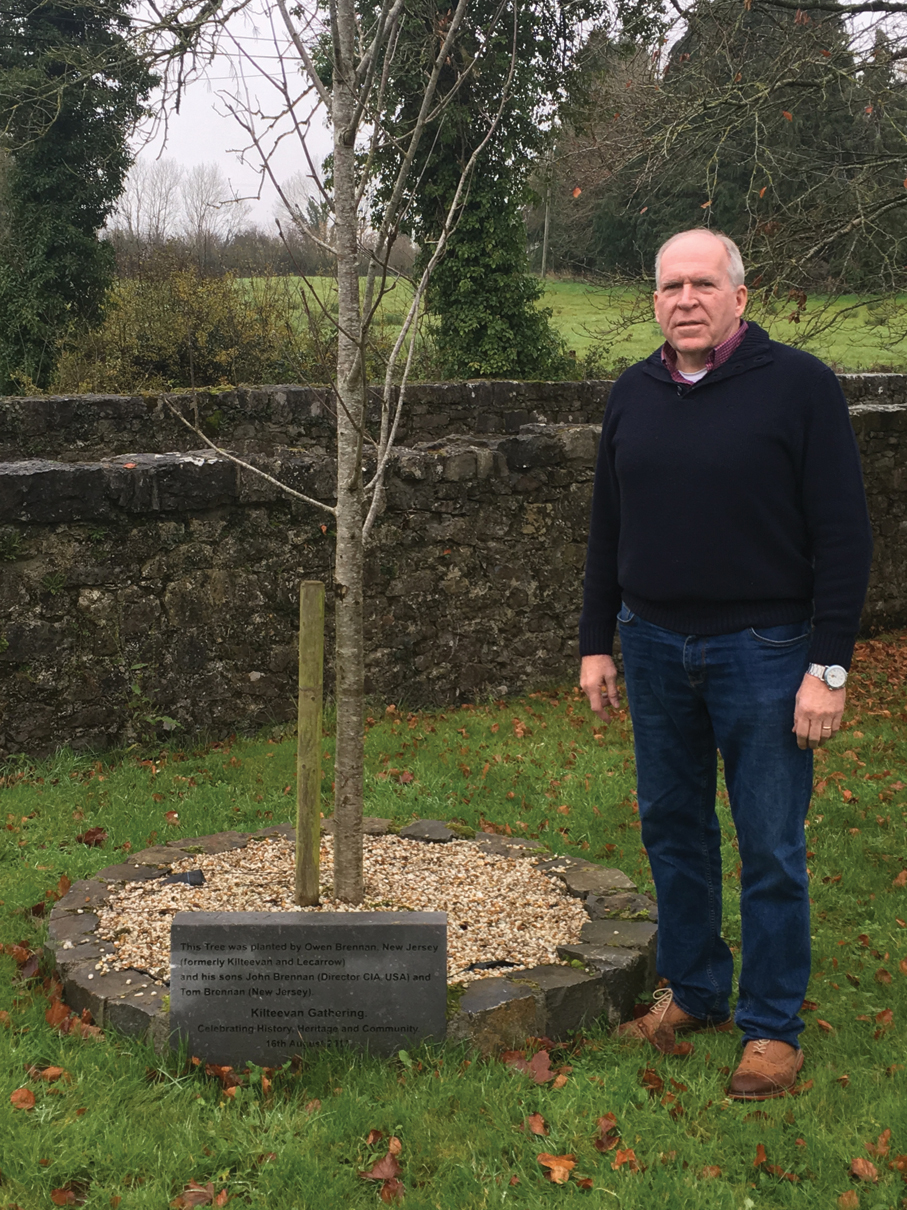 John Brennan returned to Kilteevan, Co. Roscommon, in November 2017 to see the tree he and his father had planted during their 2013 visit.

The shift within the CIA from a Cold War focus to the Arab world made Brennan, fluent in Arabic and a Middle East specialist, a valued commentator, and there is no doubt that he is one of the foremost political minds of this era. He was recently named a distinguished fellow for global security at the Fordham University School of Law’s Center on National Security, and in February began his post-public service career as senior national security and intelligence analyst at NBC and MSNBC.

Outside his on-air time and office hours, John Brennan delights in prioritizing his heritage and faith – his guiding lights. Born in 1955 in Jersey City, New Jersey, Brennan was raised in West New York and North Bergen in an extremely Irish household. His father, Owen, who died in December 2016, was a native of County Roscommon, and his mother, Dorothy, who died in April of last year on what would have been her husband’s 97th birthday, was first-generation Irish American, from Mayo and Galway. They met at an Irish dance and married in 1952. 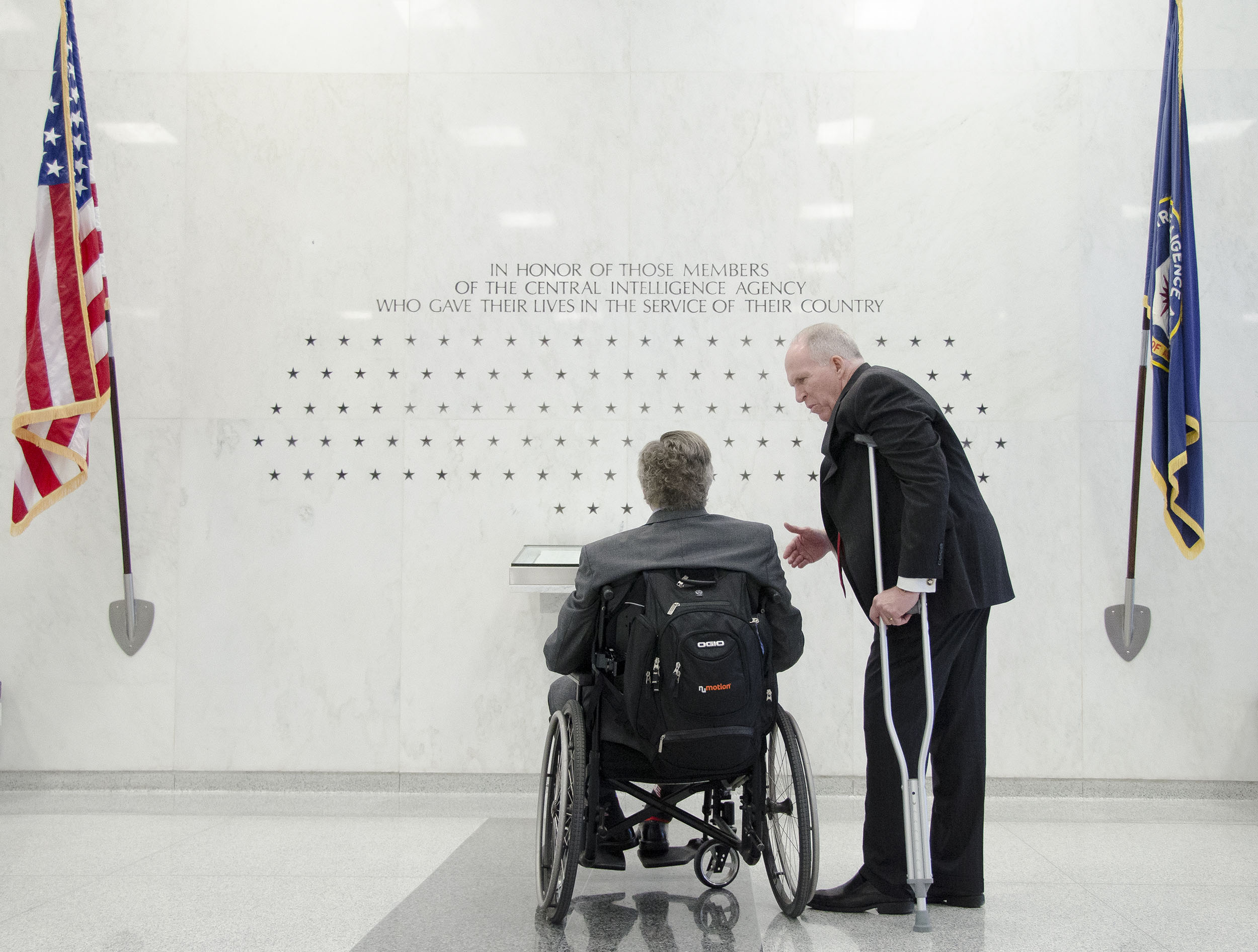 Brennan speaks in the East Room of the White House after President Obama announced his nomination as CIA director. Obama also announced his choice of former Senator Chuck Hagel (left) to head the Department of Defense. January 7, 2013. (Photo: CIA)

“After 65 years of marriage, I am sure she didn’t want to miss a birthday with her beloved ‘Owenie,’” he told Irish America recently.

I visited Brennan at CIA headquarters in Langley, Virginia at the end of 2016, and learned that Ireland was a constant presence in the Brennan house when he was growing up.

“My father’s brother and sisters who were over here – five of nine siblings – would gather in someone’s house every Sunday, and my family loved singing and dancing. The Clancy Brothers and Tommy Makem were constantly on the record player in our house. My sister took Irish-dancing classes and we used to go to the feises, so we were all in!” 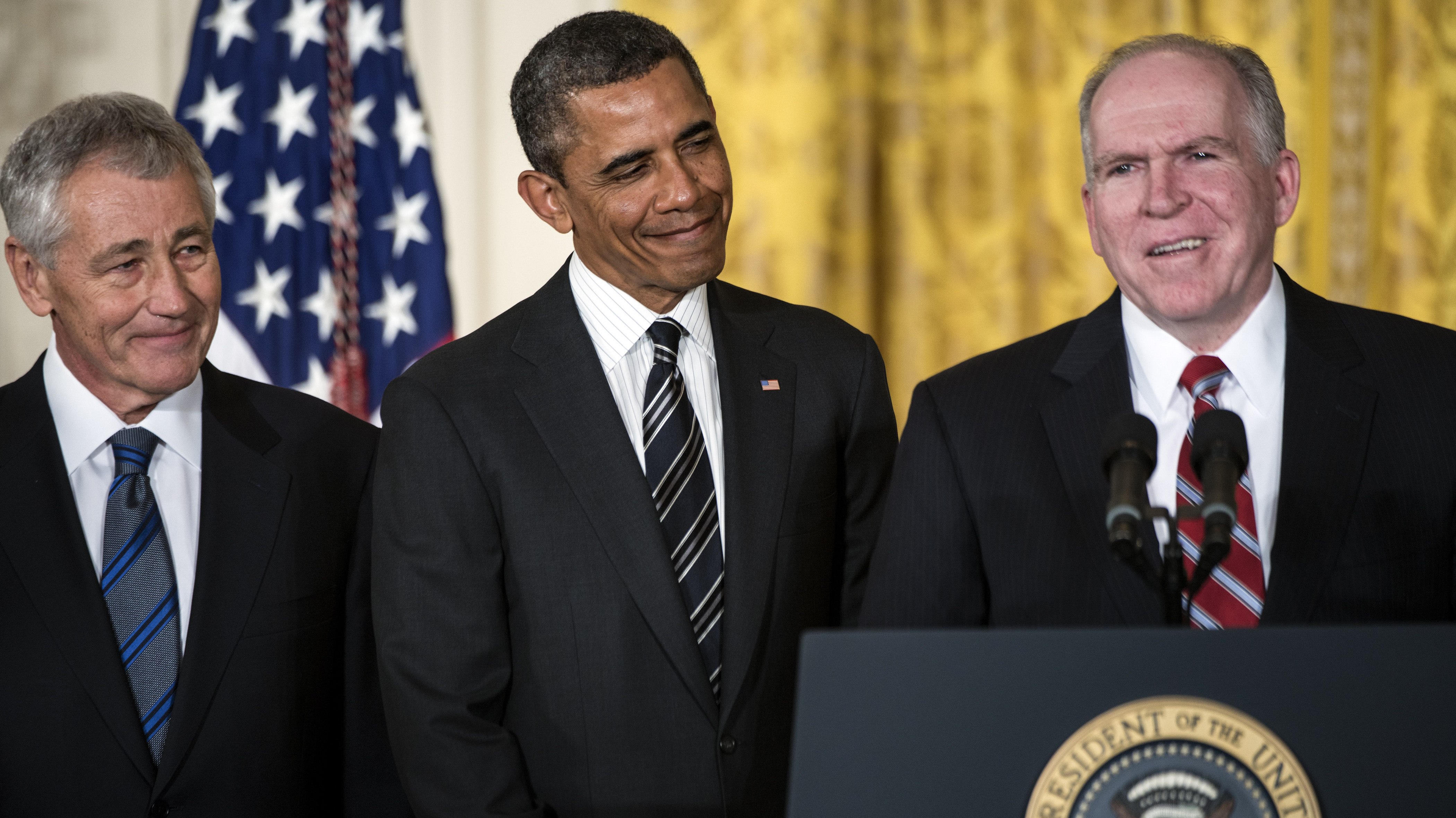 John Brennan speaks in the East Room of the White House on Monday, after President Obama announced his nomination of Brennan to run the CIA. Obama also announced his choice of former Sen. Chuck Hagel (left) to head the Department of Defense. (Photo: Brendan Smialowski / Getty)

The Irish influence in Brennan’s life is still strong. He can hold down a discussion on Gaelic games, talk about his father’s hero worship for the All-Ireland winning Roscommon teams of 1943 and 1944, and even has a couple of Irish words, pronouncing his name as Gaeilge as Seán Ó Braonáin.

One of his prize possessions is a hurling stick used in the ancient game, given to him by his good friend Irish Prime Minister Enda Kenny.

Five years ago, he and his brother Tom took their father on the trip of a lifetime back to Roscommon for The Gathering, a government initiative to bring emigrants and the diaspora back to Ireland. Owen Brennan was once a blacksmith, working for the Anglo-Irish McCalmont family in what is now the Mount Juliet Estate, complete with plush hotel and golf course, in County Kilkenny. Back then, Owen slept upstairs from the stables in a loft. Entering the Big House was forbidden, especially for a lowly blacksmith who was expected to know his station. 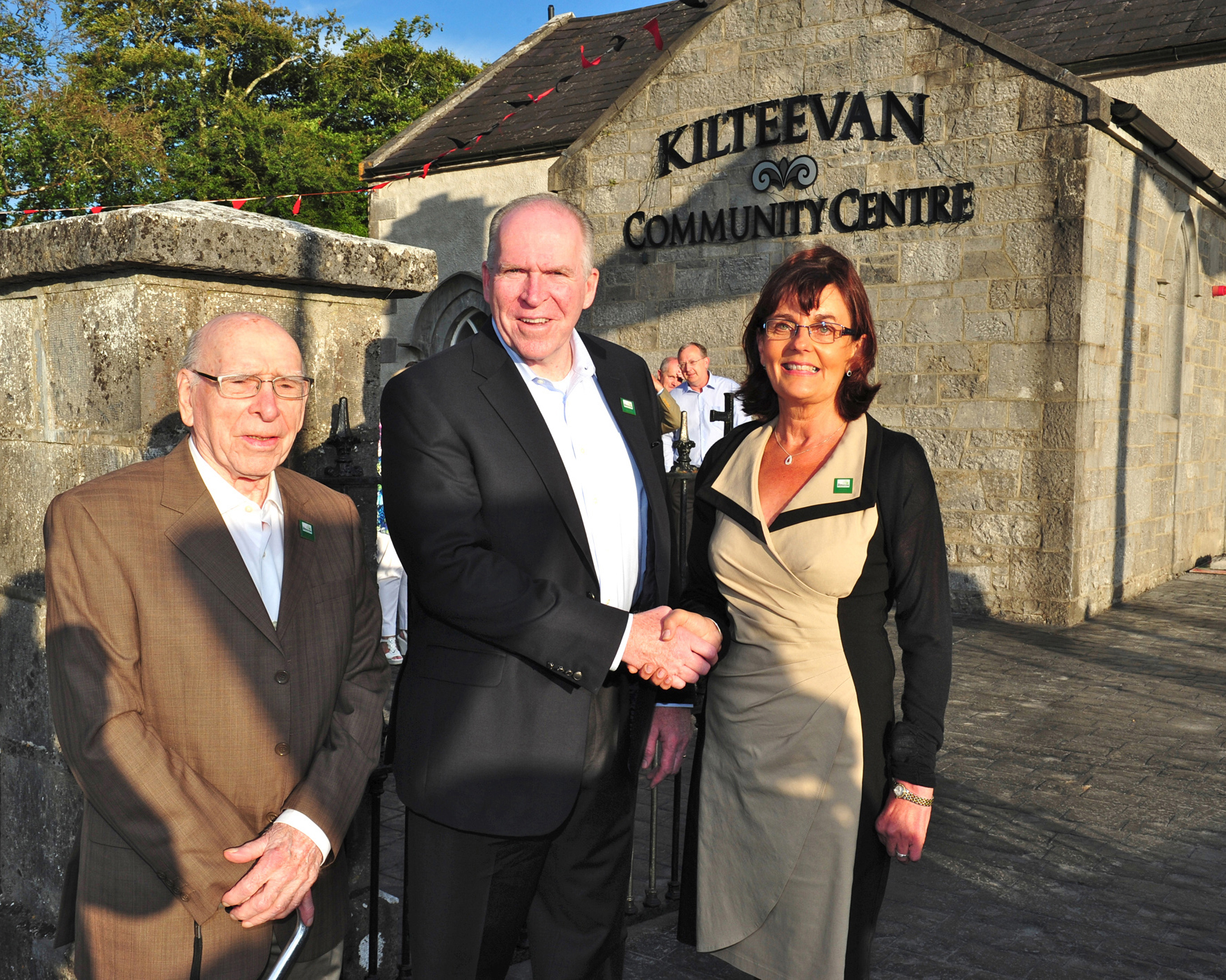 Brennan and his father Owen at the Community Center in Kilteevan, Co. Roscommon in 2013.  The center once was the church where Owen was baptized and where he received his first holy communion. (Photo: Joe Travers)

When the Brennan brothers arrived in Ireland, the sons had a surprise for their father. The finest suite in Mount Juliet, the house whose door he never darkened, was reserved for him.

Owen and his family had come a long way.

As a young man, Brennan never took for granted the chance his parents had given him, even if he was a little undecided about what to pursue post-high school. At one point he even had an earring, long hair, and motorcycle, but the Jesuits won out and Brennan went to college at Fordham University, across the Hudson River in the Bronx, to which he had to take a bus, then two subway transfers.

He excelled in that to which he applied himself – on the basketball court, he was known as “Jumping Jack” for his prowess – and had high ambitions:

“I wanted to be the first American pope.” 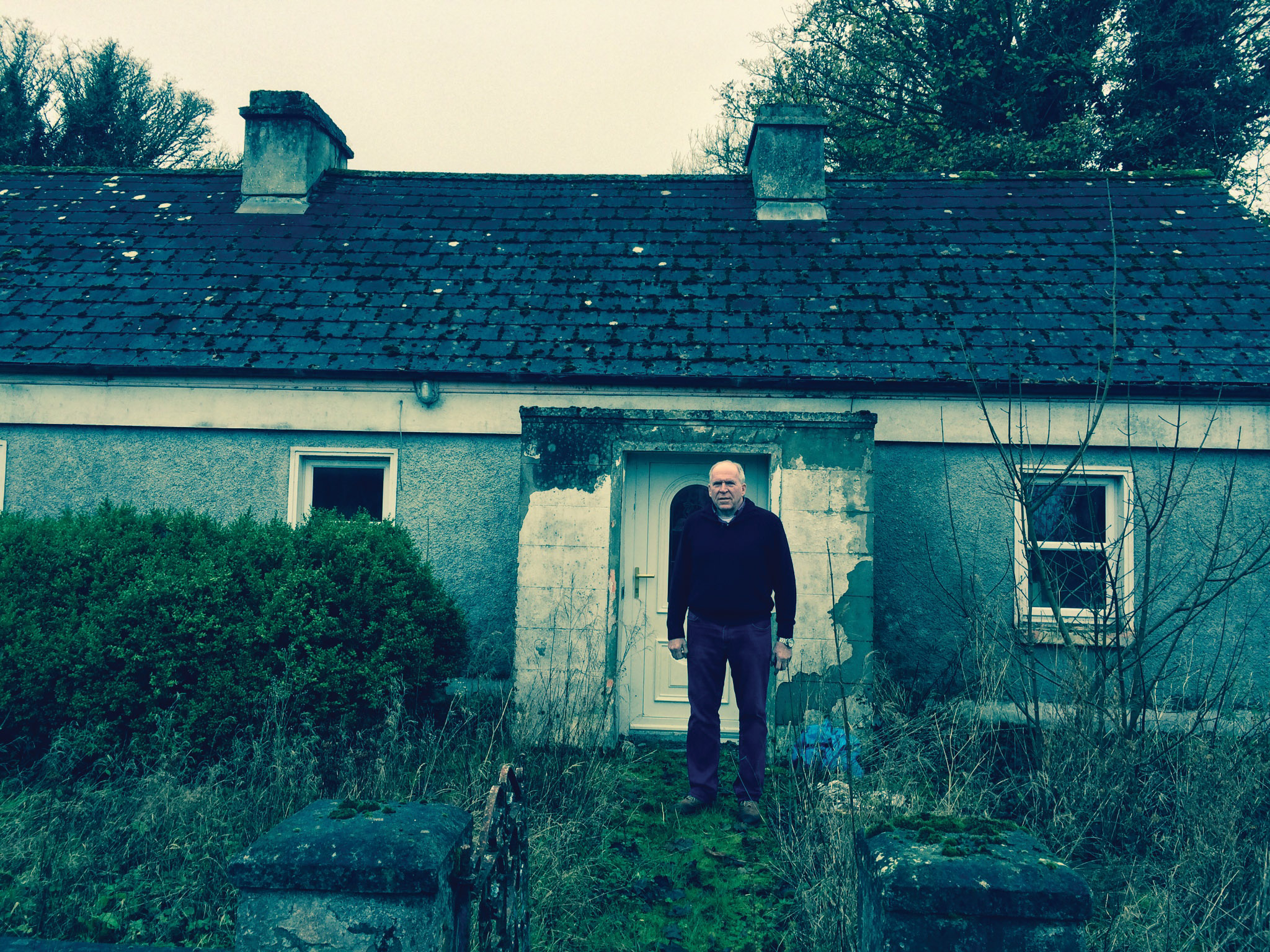 Brennan pictured at the home where his father was born on April 2, 1920, in Clooneskert, Co. Roscommon, last November.

Instead, he discovered girls and decided to not pursue the priesthood. But the imprint of the examined life instilled in him by the Jesuits is still with him. He credits Fordham with giving him “a strong foundation in morality and ethics and core religious foundations.”

Growing up, Brennan loved to travel and was drawn to distant locales. He spent a semester as an exchange student in Cairo at the American University from August 1975 to January 1976. The Arab world fascinated him. In Cairo, he took courses in Arabic and later went to graduate school at the University of Texas in Middle East studies where he refined his language skills. 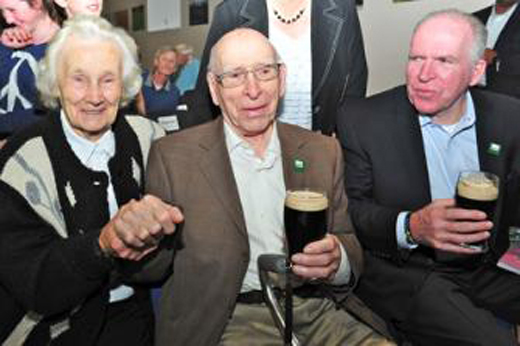 It was as an undergraduate when the decisive moment he applied to the CIA came.

“I was on the bus going to New York to Fordham and the New York Times had an advertisement for the CIA, and I then sent in my resume.” He was hired in 1980.

Then came the long climb to the top. The utter faith that presidents Bill Clinton, George W. Bush, and Barack Obama placed in him, his reputation for no nonsense truth-telling, plus a working schedule that makes a workaholic look like a slacker ensured Brennan’s success. Along the way he married Kathy Pokluda, of Czech ancestry. Together they raised one son and two daughters – Kyle, Kelly, and Jaclyn – and together they’ve been for 40 years.

Asked to reflect on the question every director actively considers if they are any good – to name the best and worst moments of the job – Brennan’s reply is both surprising and indicative of the man and his ability to see the real live flesh and blood children and adults who suffer. 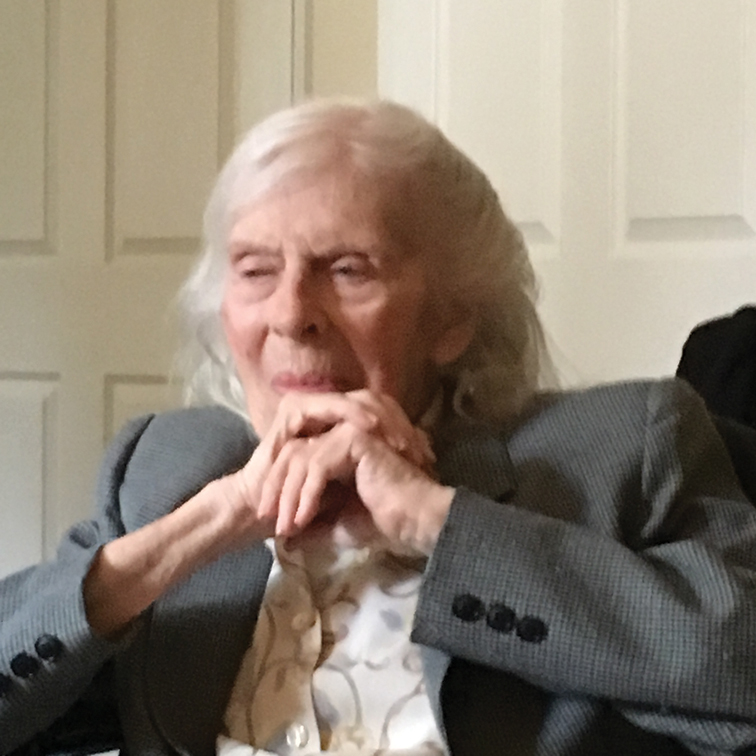 “The worst moments are when a CIA officer falls in the line of duty,” he says.

If there is a pinnacle of his career, it must be his involvement in the operation that led to the killing of Osama bin Laden in May 2011.

“That was certainly one that I can remember very, very vividly because there were 48 hours and there was a period of time where there wasn’t that much sleep. There was a lot of anxiousness and concern about the individuals who were a part of that raid,” Brennan recalls. 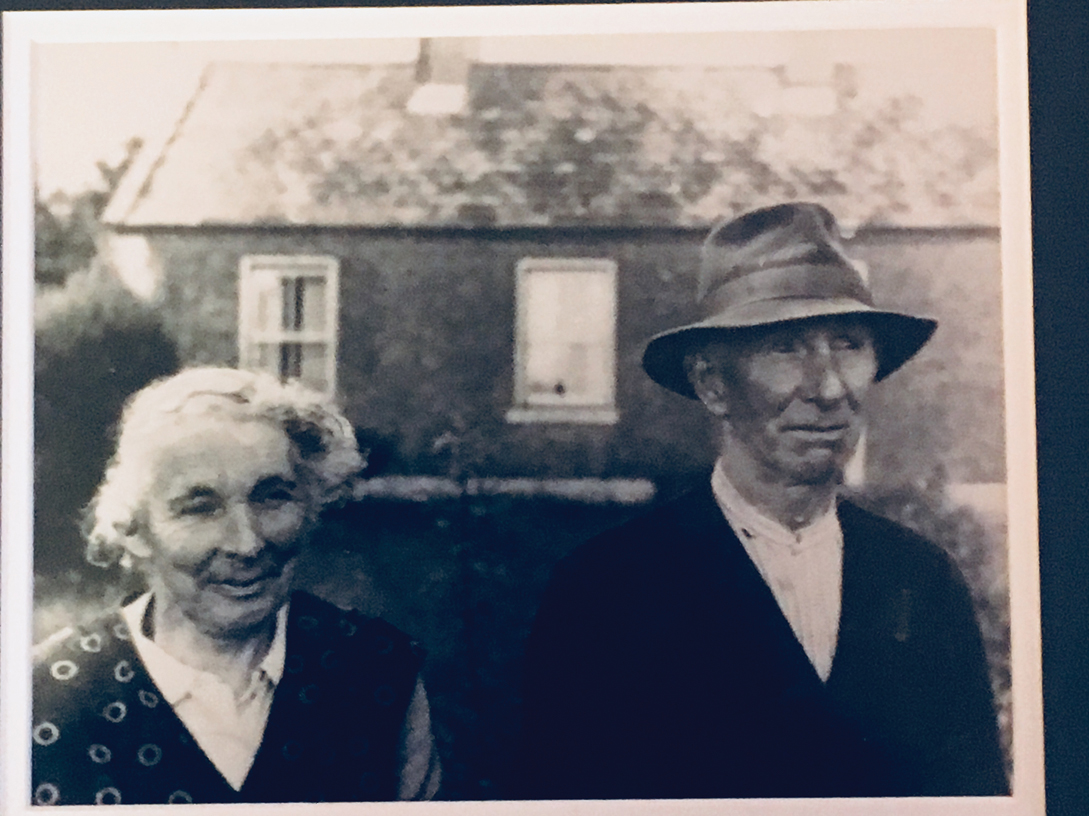 “I can remember leaving the White House that night after many, many hours there, and it was lit up outside and Lafayette Park was bright, and people were all around going through the street. You could hear the chants of ‘USA’ and ‘CIA’ It was quite a moment.”

Though his term at the CIA expired once Trump was sworn in, Brennan continues to be a powerful voice in the national debate. He warned the FBI shortly before the election that the Russians were perverting the process in favor of Trump. He has also been outspoken on what he sees as attempts to undermine the truth about what happened in the 2016 election and has been fearless in speaking out. On a personal level, he is back teaching at his beloved Fordham University, but we may well have not seen the end of him as a national figure yet. His parents have now passed on but what they taught him about decency, respect, and truth-telling has obviously stayed with him.

Leave a Reply to Maureen mcDermott