Dennis Long photographed at the Lakes of Killarney.

When Irish America first interviewed Dennis Long, in January 1986, he was part of a new generation of Irish American corporate leaders. “Irish Americans are really only now reaching the top levels of business, law, finance and politics,” he told publisher Niall O’Dowd. “We’re the third generation and we’ve paid our dues. It’s now time to put something back.”

He certainly did that.

Back then, Long was president and COO of Anheuser Busch, the largest brewing company in the world. His was an extraordinary success story. A poor kid from a working-class neighborhood, he had risen from office boy to president and chief operating officer. At just age 41, he took over the company at a crucial time in its history.

Anheuser-Busch was reeling from a 100-day strike that had kept its product off the shelves and there was a growing threat from Miller Brewing, which was looking to take over the market share.

“We had never looked at the company in that detail. We realized that we were going to have to develop new strengths to survive,” Long said at the time. 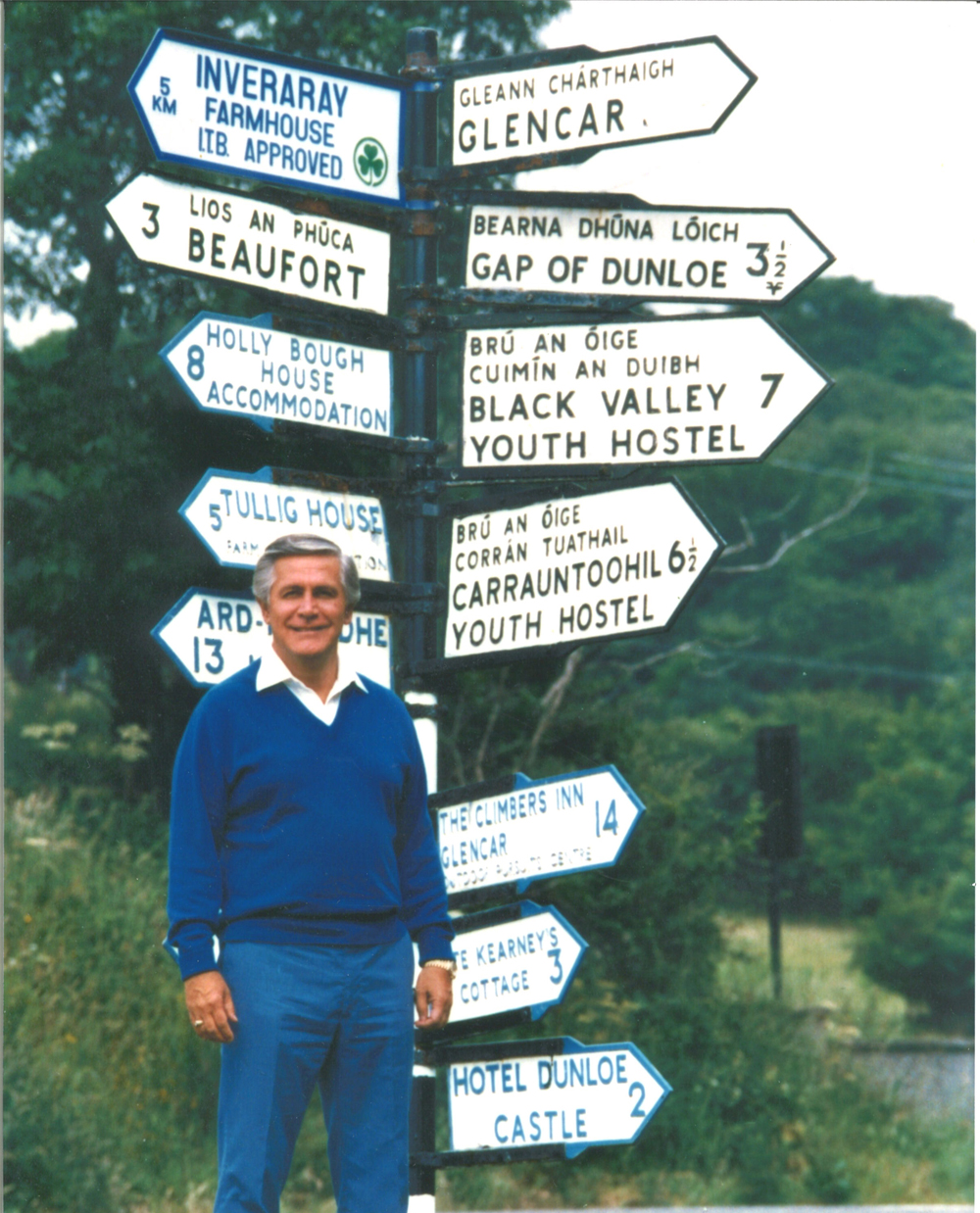 As president from 1977 to 1987, Long nearly doubled Anheuser-Busch’s beer sale volume, adding 35 million barrels and giving the company a 33.6 million barrel lead over their nearest competitor.

He did that by doubling the marketing staff and greatly expanding the advertising campaign, reaching out to specific groups, and by taking the brand overseas. Much to Ireland’s benefit.

In 1985, he initiated, the company’s sponsorship of the Irish Derby held on the rolling plains of the Curragh in County Kildare, making what became known as the Budweiser Irish Derby into one of the richest horse races in Europe, and turning the Irish into Budweiser drinkers in the process.

He also saw a opportunity to expand the brand in the U.S. by sponsoring sporting events, including soccer – the game he had played growing up in the “Patch,” as the Irish neighborhood of his childhood was called. 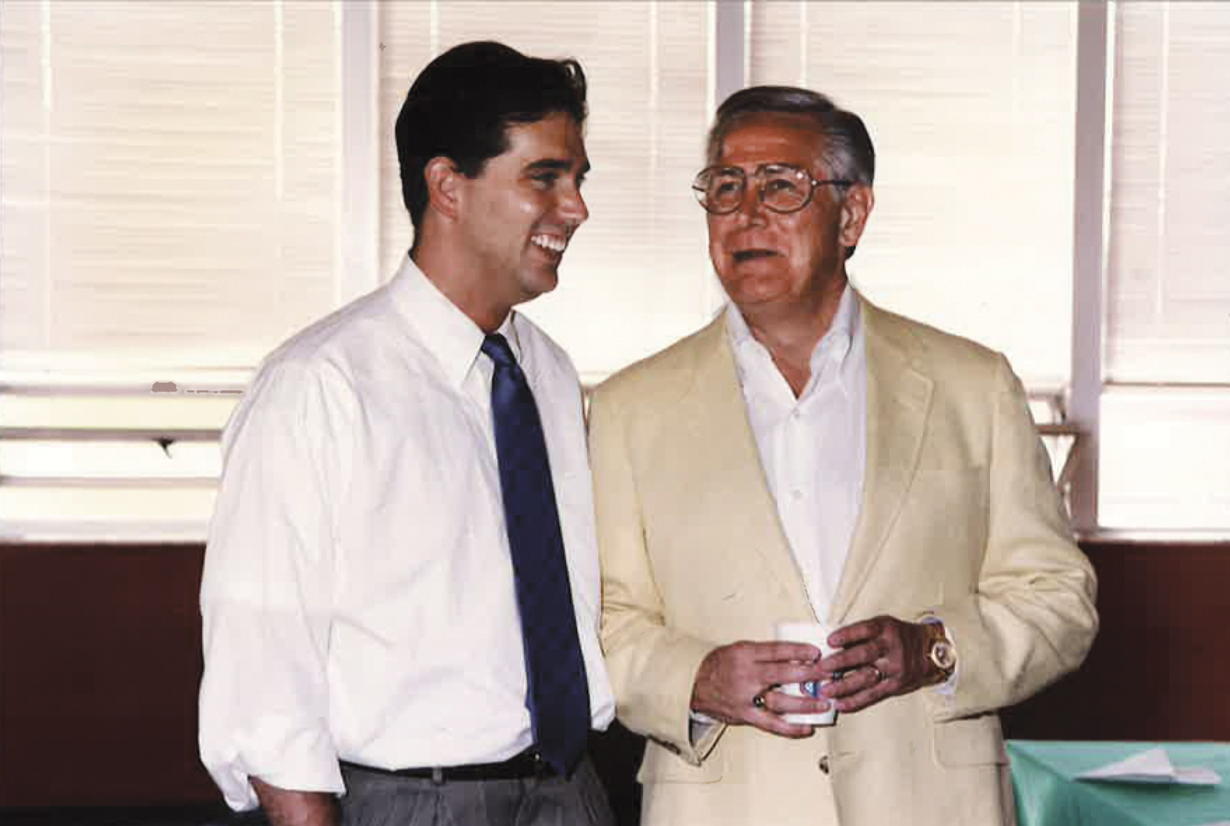 Dennis “Denny” Long was born in Chicago to third-generation Irish American parents. When he was four, his family moved back to St. Louis. Long’s fourth-great-grandfather immigrated from Ireland in the 1850s, and after disembarking in New Orleans, made his way to St. Louis via the Mississippi River.

Speaking to me from his office in Sam’s Steakhouse, the successful St. Louis restaurant that he co-owns with his son, Patrick, Long talked about his early life and the tight-knit community of the Patch, where family and parish, St. Columbkille, were all- important.

People were poor, but the community was rich in spirit. “It was a haven,” Long remembers. And there was a plethora of Irishness that fully encompassed his life, from the concert full of Irish songs and music that occurred every Friday night to the Irish plays that would be performed in the Patch. 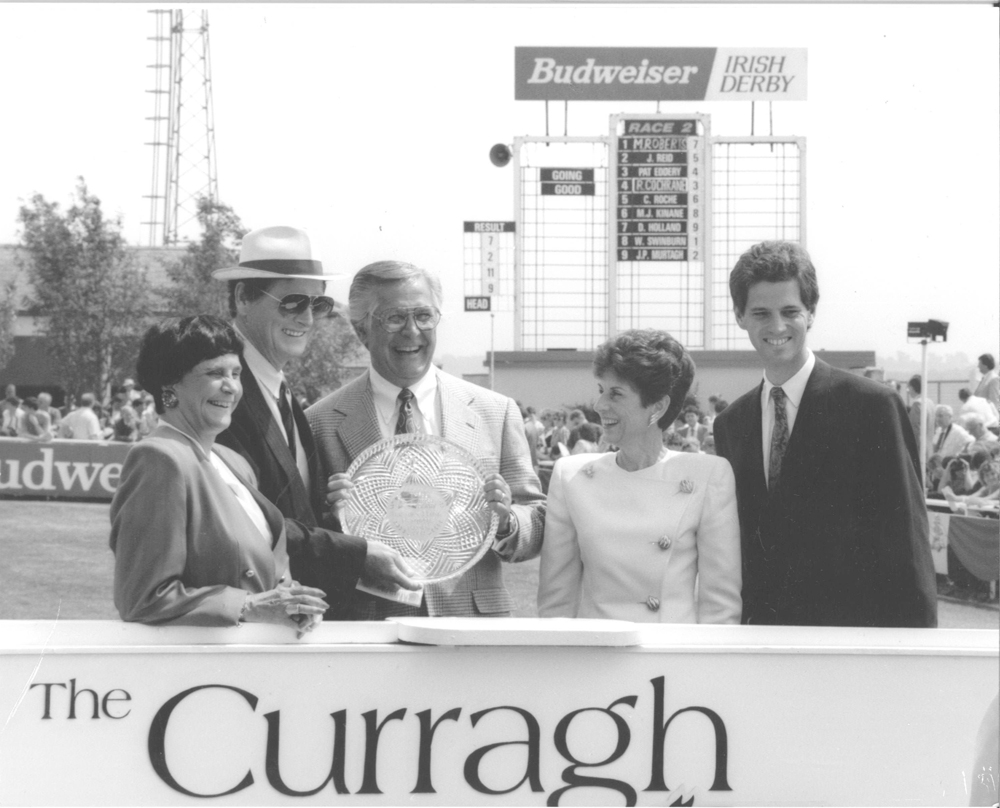 And then there was soccer. “Every Catholic parish in St. Louis sponsored a soccer team. It was part of our education, our growth, our parish activities, more so than any other sport.

“I played soccer from the time I was able to walk until now, and I’m almost unable to walk, so from limp to limp. I’m 82, so that’s a long time,” he tells me, saying that as early as he can remember, all he wanted to do was to kick a ball around a manicured field for his parish.

For generations, the city of St. Louis would champion the sport of soccer by producing brilliant players that would go on to do great things. At every World Cup the United States has participated in, there has been a St. Louisan playing. It is just a way of life for the people of St. Louis. 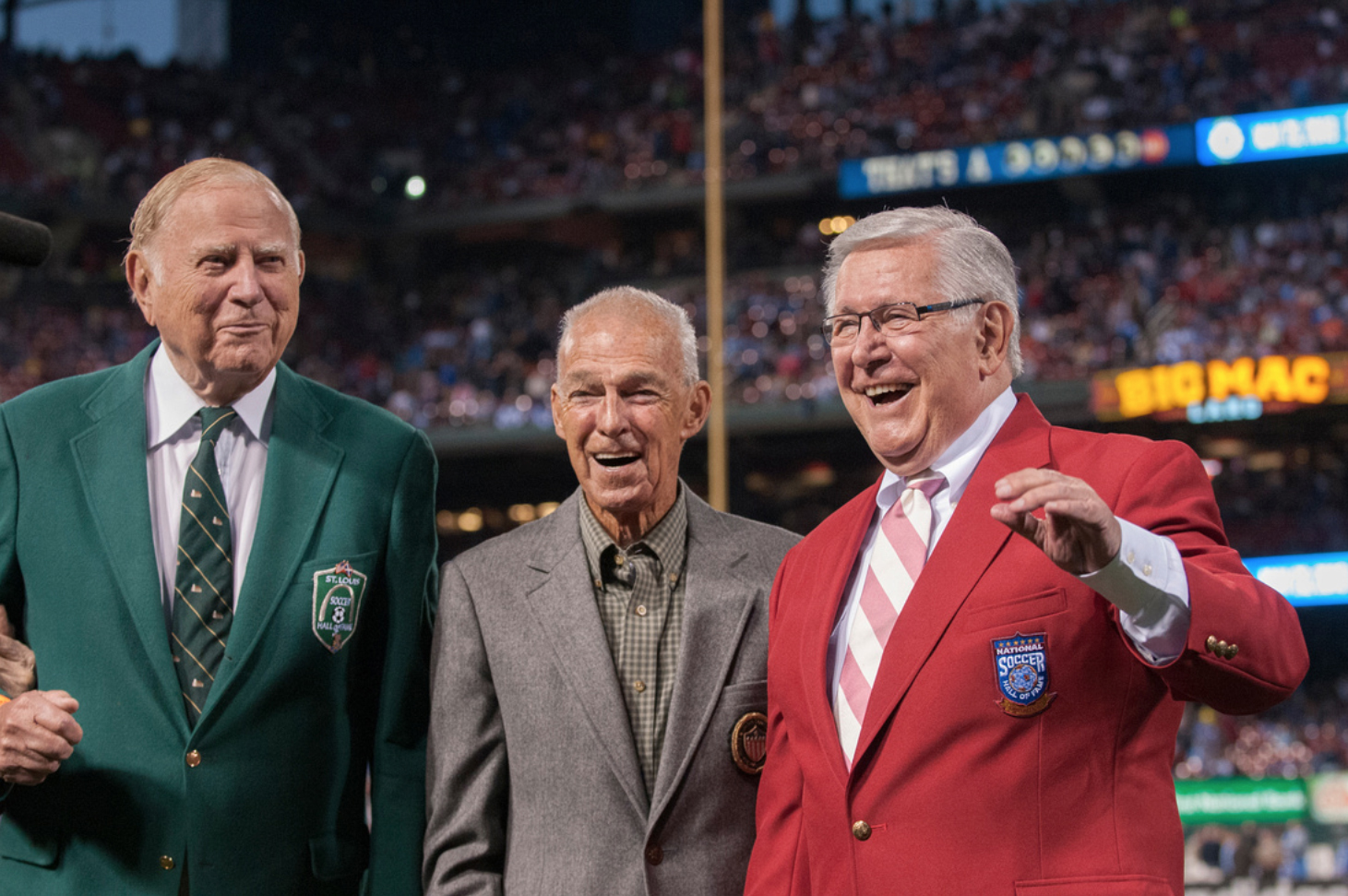 “Whenever you wanted to know someone, your first question was, ‘What parish do you belong to?’ That told us exactly where they were from. And then, ‘Do you play soccer?’” he says.

“Every Sunday afternoon, there would be games in the park and training programs going on where the older players would take the new generation and would teach them their beloved sport. It was truly an active and dynamic part of our community.”

This communal game not only sparked a lifelong passion for the game, but taught Long how to lead those within a team setting, something he was able to translate into team-building during his career at Anheuser-Busch.

In the late 1960s, Anheuser-Busch sent him to Ireland to try to acquire Guinness, the famed stout of all Irish stouts. Long came to know Benjamin Guinness himself, then head of the company.

Guinness wasn’t prepared to sell. But Long’s hope for Anheuser-Busch’s presence in Ireland was undiminished. 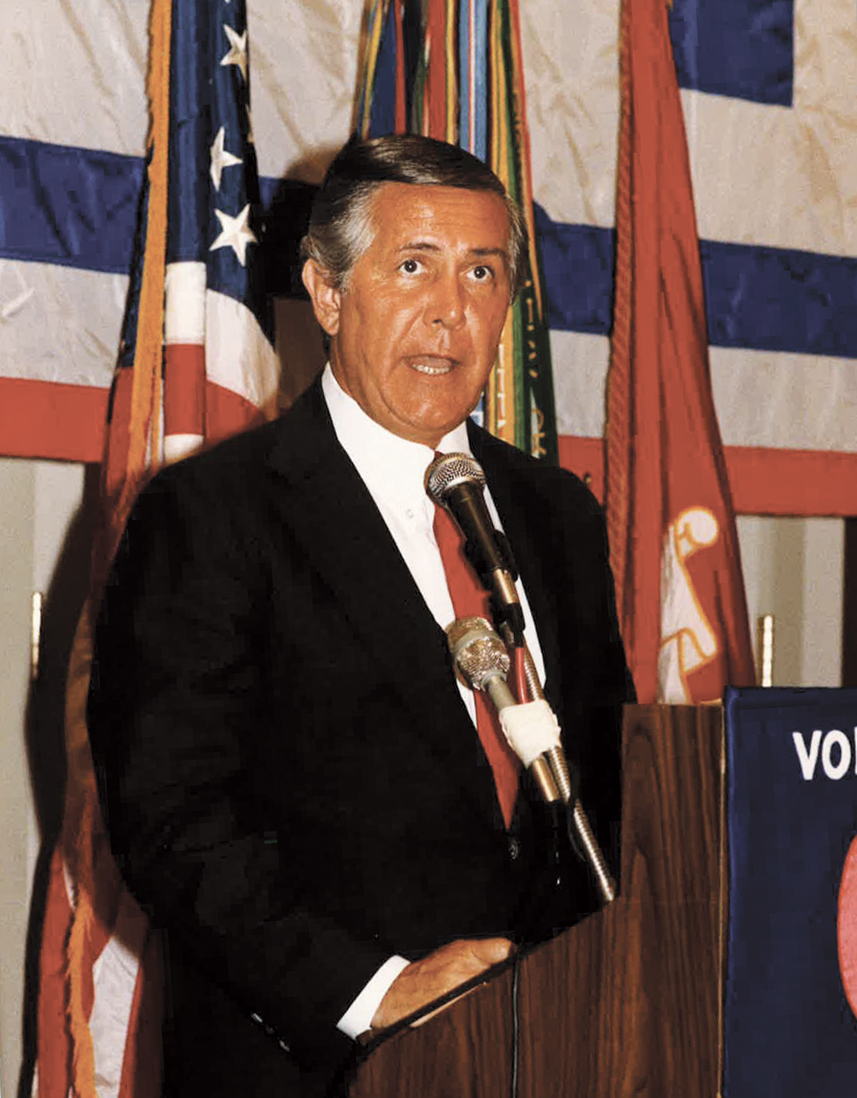 Dennis Long was president of the USO from 1984 to 1987, for which he received the Secretary of Defense Medal for Distinguished Public Service on October 1, 1987.

Anheuser-Busch, under Long, sponsored the Shamrock Games, which brought the Busch Soccer Club of St. Louis to Ireland for a chance to travel and to learn about a new culture through soccer.

On that trip, the team paid a visit to the Curragh racecourse, where a member of the board asked Long straight out if Anheuser-Busch would be interested in sponsoring the Irish Derby. Long spotted an opportunity and (despite not having control over the European business at the time) solidified a deal. Anheuser-Busch would sponsor the race and rehabilitate the facilities for $1 million, as long as the money would go into the stands, where the “real beer drinkers” (who would also ideally drink Budweiser) would be. From 1986 to 2007, Budweiser sponsored the Irish Derby and made it an Irish sporting staple.

In the late 1980s, Long’s position as president and COO at Anheuser-Busch allowed him to not only help the soccer-loving people of St. Louis, but the United States as a whole.

In the 1980s, Long, with the help of Anheuser-Busch and the blue-collar workers of St. Louis, built the Anheuser-Busch Center, now the World Wide Technology Soccer Park, one of the finest public soccer complexes in the U.S. Originally built with four fully-equipped pitches, it has been expanded to six soccer fields – two turf and four grass fields. In 2011, the main field was renamed the Dennis P. Long Field in his honor.

The extended Long family in Ireland.

Outside of soccer, Long also served as the president of the United Service Organizations from 1984 to 1987, which helps over 10 million military service members and their families. And for his work, he received the Secretary of Defense Medal for Distinguished Public Service, the highest honor that can be awarded to a civilian by the Department of Defense.

In the early 1990s, the U.S. Soccer Federation made a bid to host the World Cup for the first time. Joao Havelange, then president of FIFA, was visiting Anheuser-Busch and was brought to Soccer Park. After seeing their passion made a reality, Havelange said, “If a company the size of Anheuser-Busch, the biggest brewery in the world, could spend this kind of money to put up this kind of a park in a community where there is not even a professional league, then surely soccer is alive and worthy of the World Cup.” A couple months later it was announced that the United States would host the 1994 World Cup, a watershed event that led to the creation of Major League Soccer, the United States’ highest professional soccer league, and a soccer revolution that is still enjoying success today.

Long’s passion for his work, soccer, and his hometown of St. Louis fully encompasses his life. He has made and continues to make a massive impact on his community, his city, and the game he loves. Above everything is the importance of his heritage, having influenced the way he is with people and how he feels about the people of Ireland and the people of St. Louis.

“Anytime I could do something for Ireland, it was always something through soccer or the brewery,” he says. “I stayed in touch with my cousins over there. The people of Killarney are good people. I think that’s the secret to Ireland, its people.

That was the secret of St. Columbkille. We were one big Irish family.” ♦  Dave Lewis

One Response to “Hall of Fame:
Dennis P. Long”

Last April, U.S. Congressman Richard E. ­Neal had an extraordinary moment when he was able to pay tribute to his...