A nun, abbess, and founder of several monasteries, Brigid of Kildare was a woman who defied authority, possessed great strength of will and determination, and whose cheerful giving of food and shelter to any passing traveler laid the foundation for Ireland’s legendary hospitality.

Saints are everywhere, like enzymes, gravity, or the CIA – invisible, yes, but hard at work on your behalf no matter whether you’re Catholic or even Christian. This assemblage of visionary spinsters, ex-cons, levitating monks, beautiful-blond-virgin-martyrs, poets, and vampire killers hail from every nation in the world and have many devoted followers. But if you happen to be Irish, you may discover that saints have taken up permanent residence in your unconscious and embedded in your DNA. Who else but the Irish share the saints’ penchant for conflating paranormal activity with prayer or fusing facts with myths?

Ironically, Ireland, the “Isle of Saints and Scholars,” did not have a new saint from the 1225 canonization of Saint Lawrence O’Toole until 1975, when Blessed Oliver Plunkett, waiting in the wings for 300 years (and he was drawn and quartered too!) got the official nod. In those intervening 750 no-saints-for-Ireland years, Irish Catholics were persecuted and martyred for their faith and along the way, starved to death. It’s a mysterious snub, especially since the early saints traipsed all over Europe, converting millions. And the most radiant of all Irish saints was Saint Brigid, the “Mary of the Gaels.”

Sometime around 432, Saint Patrick (who gets all the press and parades) drove the snakes out of Ireland, a dubious feat since there hadn’t been snakes there since the Ice Age. But it was a powerful story, one he wisely used to illustrate his dispatching promiscuous pagans from the land. In another savvy move, the early Church “Christianized” Celtic deities, transitioning them into saints by retrofitting their biographies to include Christian attributes. Both Brigid and her Celtic namesake, Brigit, were associated with fire and, notwithstanding the saint’s virginity, fertility. Both were gifted in art, magic, poetry, and healing and enjoyed the same Feast Day, February 1.

And so began Christian Ireland. The fledgling Church followed the Roman civic structures and replaced tuaths with monasteries as the central units of administration. Since Ireland had no cities, monasteries were the population centers, places of secular and religious study. The monastic structure worked, thanks to the great abbots and one abbess who founded and led the first monasteries. They were now the new rulers, the new druids: Saint Columcille, Patrick’s successor with a quick fuse, Saint Cieran, Saint Colman MacDuagh, Saint Brendan (who still found time in the year 500 to discover America), Saint Jarlath, Saint Kevin (more on him later) and one wild Irish woman, Saint Brigid of Kildare. 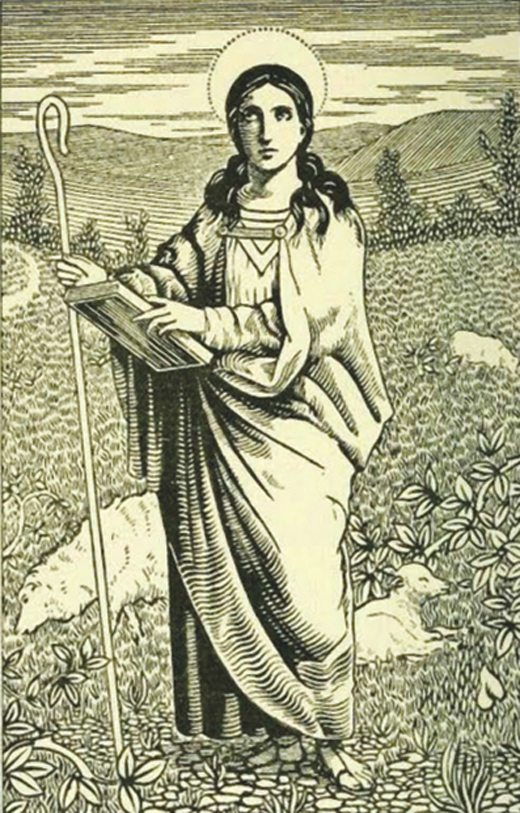 It was those Irish monasteries that changed the course of Western history. After the fall of Rome in 476, barbarians ravaged Europe and its citizens, burning all books and art. Silent scribes, in silent monasteries on that isolated isle up north, grabbed every book they could find and took on the painstaking task of copying them all. As Thomas Cahill writes in How the Irish Saved Civilization, “Without the Irish monks, who single-handedly re-founded European civilization…the world that came after them would be an entirely different world, a world without books.”

Brigid’s story begins in the middle of fifth-century Ireland, where inquisitive angels were peeking into the cottage of a slave woman in childbirth, perhaps in the company of Saint Patrick, there to baptize the newborn. The mother, Brocseach, was a sometime concubine of her owner, a pagan chieftain named Dubtach, the son of the extravagantly-named Conn of the Hundred Battles who doubtless passed his fighting spirit on to his granddaughter.

Children of slaves in fifth-century Ireland, much like children of slaves in 19th-century America, were immediately separated from their mothers, and Brocseach was sold off to a rival chieftain. Still, Brigid grew bright and beautiful, attributes that overcame her ignoble birth and made her a favorite in her father’s household. Everyone admired her kindness and charity while awed by her acts of magic. But her real power was the strength of her will, determination, and open defiance of authority. She was in constant rebellion against her father, even raiding his larder to feed the poor and giving away his jeweled sword to, of all people, the local leper.

Dubtach knew the young beauty would be a prize bride and pointedly ignored her vow of perpetual chastity. He presented her with two suitors, one a king and the other a poet – in short, one rich and the other, arty. She flatly turned both down and was forced to make a most fervent prayer. She asked God to make her ugly, the better to focus on her destiny. Her prayers were answered when, the following morning, she awoke to discover she was the fifth-century version of the Elephant Man. The suitors hastily withdrew, but once consecrated a nun, Brigid, as the saying goes, got her looks back.

She now began her mission, first taking the veil, and once again aggressive angels appeared, this time to shove the priest aside and place the veil on her head. Then Brigid, with seven like-minded young friends, formed Ireland’s first religious community of women. Before Brigid, girls who took holy vows could only retreat to the family cottage and just… pray. But Brigid and her sisters did more than pray – they built, especially after the saint, using some sly magic involving her cloak, duped a local king out of 12 square miles of early real estate.

Under an oak, the sacred tree of the druids and on the site of a Celtic shrine, Brigid founded her monastery at Kildare (Irish: Cill Dara, “church of the oak.”) It was a “double monastery,” allowing both monks and nuns; she also accepted poets, artists, farmers, and craftsmen. Brigid’s monastery at Kildare was a happy place, a stark contrast to the Abbey of Glendalough, a reflection of its odd founder, Saint Kevin. Kevin prayed, standing, arms extended, a stance he maintained for seven years and, in winter, he recited his prayers, naked, in a freezing lake.

It could be claimed that Brigid laid down the foundation for Ireland’s legendary hospitality. Travelers and vagabonds, sick or well, Christian or not, flocked to Kildare knowing the inclusive Abbess would invite them to eat, drink, and stay as long as needed. She was all about largesse and compassion, as evidenced by her most famous poem:

She only left Kildare to chariot through Ireland supervising the building of churches, schools, and convents, the latter to assure women received an education, something unheard of at that time. An artist herself, she established a school of art most famously responsible for the Book of Kildare, which was destroyed by Cromwell but described as “more gorgeously illuminated” than the Book of Kells.

Despite all her accomplishments, her legend grew because of her many miracles, so resonant with Irish mysticism: she taught a fox to dance, tamed a wild boar, hung her damp cloak (that cloak again!) on a sunbeam to dry, obliging the sunbeam to remain all night. In her later years, her powers took on almost Christ-like proportions – she could multiply food, exorcise demons with a casual sign of the cross, and calm storms. Proving she was someone you’d like to have a beer with, Brigid, fond of the brew herself, could produce bottomless barrels and turn both milk and water into ale. Once, while curing lepers, she learned there was nothing to drink and used her own bathwater to stand the entire colony to a pint.

Brigid was so revered in her lifetime that Saint Mel ordained her a bishop, although some (cranky) scholars may dispute this. What is not disputed is that she said mass, heard confessions and ordained clergy. And, yes, she was finally, after a long search, reunited with her long-suffering mother who had remained a slave all those years. The illustrious Brigid bought her mother’s freedom and took her to live with her in Kildare.

Brigid died in 524 and her cult quickly spread as her manuscripts were translated into French, English, and German and countless churches were named after her. She was buried in Downpatrick, County Down, with the two other major saints of Ireland, Patrick and Columcille. In the 17th century, British troops looted her grave, but Irish knights managed to deliver her head to Portugal while her busy cloak still survives in Belgium.

While explaining Christ’s death to a dying pagan, she wove a cross from the rushes strewn about his floor. Today, anyone with any sense, Catholic or not, Christian or not, Irish or not, can place them in their houses to ward off evil. It works and so do Brigid’s medals, available at the Franciscan Sister’s Gift Shop: (845) 424-3809 or giftshop@graymoor.org. 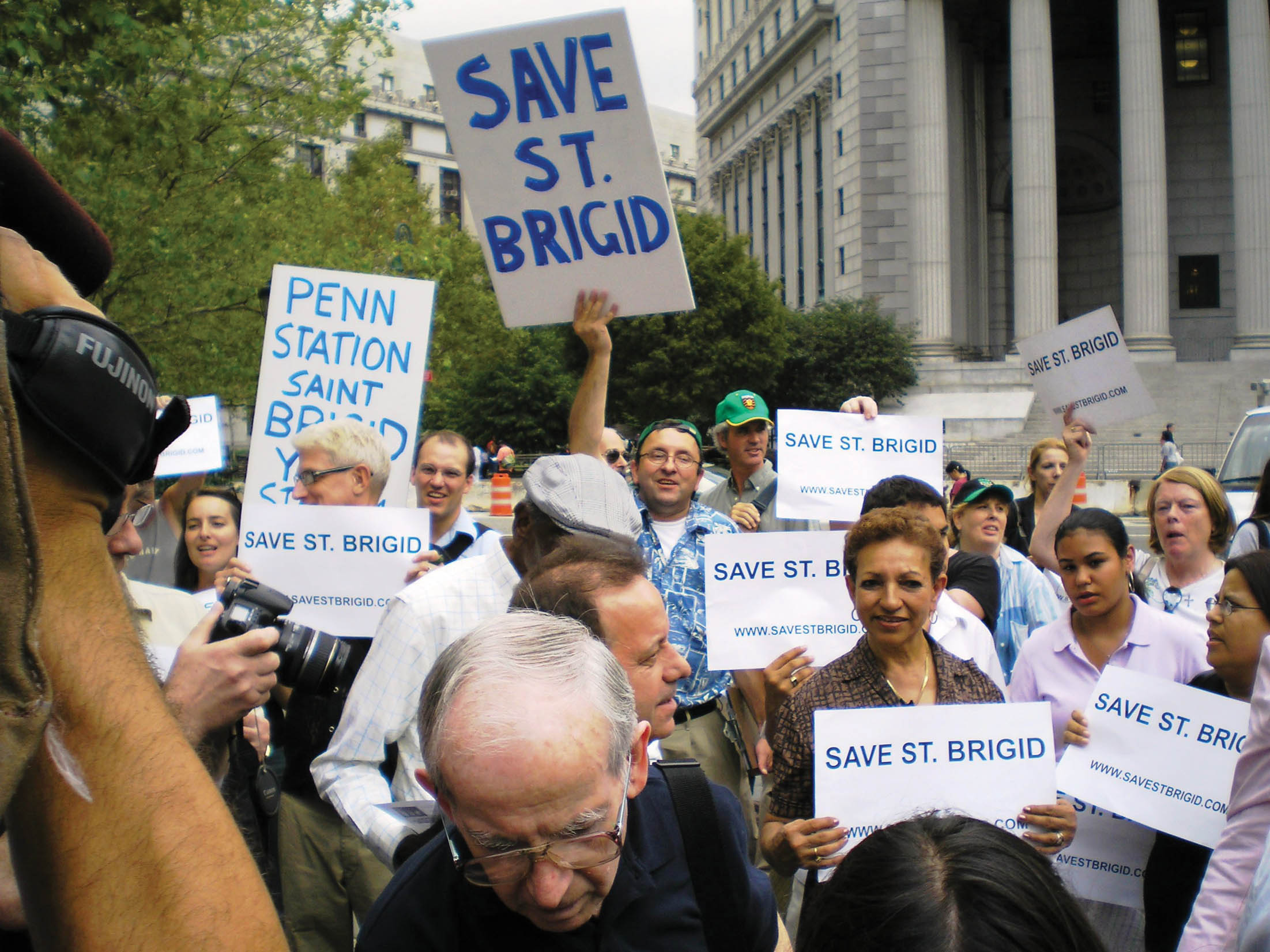 New York City’s “Save St. Brigid” rally on August 24, 2006. Later that day a judge stayed demolition of the historic St. Brigid Roman Catholic Church on New York’s Lower East Side. In 2008 an “unexpected but very welcome gift” of $20 million from an anonymous donor to the archdiocese saved the church. Built in 1848 by shipwrights to accommodate the thousands of Irish immigrants fleeing starvation, the church was designed by 25-year-old Patrick Keely, an Irish immigrant from Thurles, County Tipperary, who carved the five-pinnacle reredos, organ case, and wooden altar himself. Keely went on to design many Catholic churches including the Basilica of the Sacred Heart at the University of Notre Dame and Boston’s Cathedral of the Holy Cross. (Photo: David Shankbone / Wikimedia Commons)

Rosemary Rogers co-authored, with Sean Kelly, the best-selling humor/ reference book Saints Preserve Us! Everything You Need to Know About Every Saint You’ll Ever Need (Random House, 1993), currently in its 18th international printing. The duo collaborated on four other books for Random House and calendars for Barnes & Noble. Rogers co-wrote two info/ entertainment books for St. Martin’s Press. She is currently co-writing a book on empires for City Light Publishing.