In a study published late December in the journal Scientific Reports, researchers have found 10 genetic groupings that mirror the ancient and medieval boundaries of Irish kingdoms: Ulster, Leinster, Munster, and Connacht. The study was explored by a team of Irish, American, and British scientists that analyzed data from 194 Irish people with four generations of ancestry tied to specific regions on the island.

Dr. Gianpiero Cavalleri, a co-author of the study from the Royal College of Surgeons, shed some light on how this came to pass: “The likelihood is that it’s a combination of things – a little bit of geography combined with wars or rivalry generates kinship in each distinct area.” 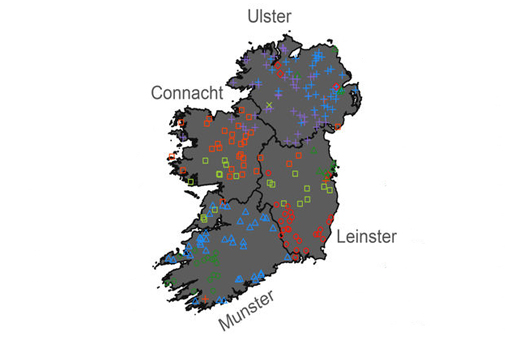 As well as the wars and rivalries that the Gaels had participated in, the Ulster Plantation made an impact, as researchers found that population mixing occurred around the 17th to 18th centuries. A distinct Irish genetic landscape began during the Bronze Age when people living on continental Europe migrated across the English Channel and the Irish Sea.

Out of the 10 more recent clusters, seven were found to be of Gaelic origin, and three had mixed Anglo-Irish ancestry. Notably, the study also found that Nordic ancestry comprised about 20 percent of the Irish gene pool, a greater share than previously thought, and a statistically significant higher share than in either English or Welsh. Slowly but surely, scientific and historical research are coming together to tell the true story of the Irish. ♦  Dave Lewis

One Response to “Mapping Irish DNA”