Douglas Hyde, born in Roscommon in 1860, was a leading figure in the Gaelic revival and Ireland’s first president.

A couple of unplanned events shaped the course of Douglas Hyde’s early life. He should have been born in County Sligo, where his family resided, but instead he arrived on January 17, 1860 in Castlerea, County Roscommon, where his mother was visiting her parents. Seven years later, the family were back in Roscommon, this time in Frenchpark, after his father – the Reverend Arthur Hyde, Jr. – was appointed rector in the parish of Tibohine.

With two older brothers away at school, Hyde would have been expected to follow in their footsteps – as was customary for Anglo-Irish gentry at the time – but an illness (some accounts refer to measles; Hyde himself wrote “I hurt my left thigh, and it was a great hindrance to my studying”) saw him return home from Dublin after a very short time. On his return, he continued his schooling at home under his father’s supervision.

His relative freedom at home also ensured that he came in regular contact with the Irish families living nearby and he practiced his newly-gleaned Irish phrases with “James Hart, the keeper of the bogs” and “Mrs. William Connolly when she came to milk the cows in the evening.”

In December 1878, three weeks before his 19th birthday, reviewing his life to date, Hyde wrote: “When I started learning Irish I had no hope at all that there would ever be any interest in it, or that it would be of any use to me, only that I thought it was a fine worthy language; but when the society for preserving the Irish language started last year I knew then that I had done well in learning it.” 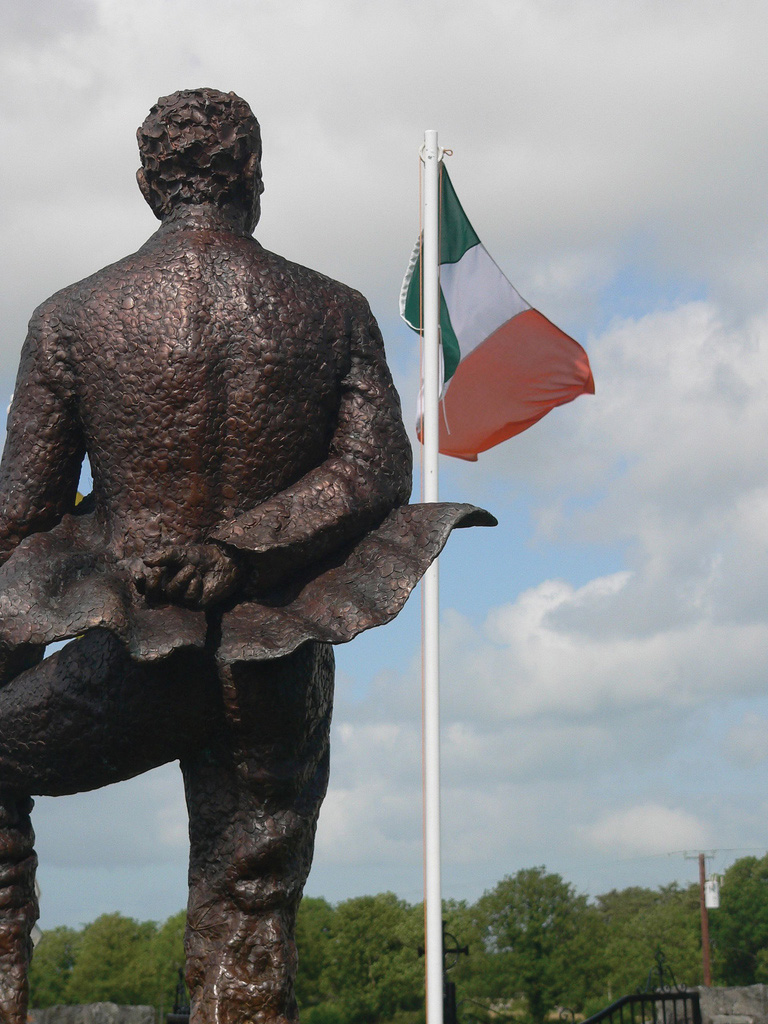 By 1880, Hyde himself was a member of said society, and had been admitted to the divinity program at Trinity College Dublin (much to the disgust of his rabidly anti-TCD father). He soon garnered a reputation as an outstanding scholar, and life in Dublin allowed him the freedom to join the Gaelic Union, and a social circle that included Maud Gonne and W.B. Yeats, which styled themselves “the Young Irelanders” in homage to the 1840s revolutionary movement of the same name.

Hyde’s father Arthur, himself descended from a long line of clergymen (and Arthurs), assumed that at least one of his sons would follow family tradition and enter the ministry. But Hyde, who had long rebelled against his father’s tendency to force his son to teach Sunday School when the reverend was indisposed (i.e. hungover), instead threw himself into his study of languages and amassed a huge range of scholarly publications, with his studies eventually culminating in a law doctorate.

His dedication to the Irish language continued, and between 1879 and 1884 he published hundreds of Irish poems under the pen name “An Craoibhín Aoibhinn” (the charming little branch). A visit to Scotland in 1886 revealed the “healthier and more vigorous” regard the people there had for their native tongue, which he ascribed to its predominant use in churches and schools. In 1889 he published his first book, Leabhar Sgeulaigheachta (A Book of Storytelling), a collection of folk-tales, rhymes, and riddles – the first of its kind in the Irish language.

The following year, Hyde took a post at the University of New Brunswick as interim professor of modern languages (“I did not find any great difficulty in that,” he noted). On his return to Ireland, he became president of the National Literary Society, and continued to espouse his views that Ireland should do more to protect its mother tongue “not as a protest against imitating what is best in the English people, for that would be absurd, but rather to show the folly of neglecting what is Irish and hastening to adopt pell-mell and indiscriminately everything that is English simply because it is English.”

Two significant events in Hyde’s life were to happen in 1893: he got married (to a young German heiress named Lucy Cometina Kurtz) and the Gaelic League (Conradh na Gaeilge) came into being. Hyde is generally referred to as the founder of the League, but his own diaries make light of that: “We established the Gaelic League and I was made president of it. MacNeill and Lloyd … were the people who did most of the work. I didn’t do much.” He was altogether more enthusiastic about the other big news: “The greatest thing I did in the past year – indeed, the greatest thing I ever did in my life – was that I got married.”

But the Gaelic League, of course, was to prove hugely influential in shaping the course of Irish history, and Hyde along with its other leaders was determined to keep their goal of preserving and reviving the Irish language as non-political and non-sectarian as humanly possible. In 1905, he and his wife embarked on a fund-raising tour of the United States, covering ground from New York to San Francisco over a period of eight months. By 1908, the year in which the National University of Ireland was founded, there were more than 550 branches of the Gaelic League throughout Ireland.

After the politicization of the Gaelic League in 1915, Hyde stepped down as president and left the organization. After a short stint in Seanad Eireann, he returned to academia as Professor of Irish at University College Dublin. On retirement, he and his wife returned to live in Frenchpark. A second short stint as a Senator was cut even shorter by his election as the first President of Ireland, on May 6, 1938, after an inter-party unanimous recommendation. Hyde set a precedent by reciting the Presidential Declaration of Office in Irish. His recitation, in Roscommon Irish, is one of a few recordings of a dialect of which Hyde was one of the last speakers. Upon inauguration, he moved into the long-vacant Viceregal Lodge in  Phoenix Park, since known as Áras an Uachtaráin.

He served his seven-year term, despite the death of his wife in December 1938 and a severe stroke in 1940, and died on July 12, 1949. After a service in St. Patrick’s Cathedral, Dublin, his funeral cortege travelled to Frenchpark, passing through the towns of Mullingar, Longford, Carrick-on-Shannon and Boyle, with an honor guard standing ready in each to pay tribute to Ireland’s first president. ♦

This article was originally published in the December 2017 / January 2018 issue of Irish America.