The humble origins in a small Derry pub of what became Ireland’s largest Halloween festival.

An award-winning Irish documentary that unravels the ancient Celtic festival of Samhain, or the beginning of the winter season, is currently streaming on Vimeo. Spiorad na Samhna, or “The Spirit of Samhain,” and also traces the beginnings of Ireland’s biggest Halloween carnival in Derry back to the Troubles of the 1980s. Produced and directed by Dessie Baker, the film won best prize for short documentary at Cork’s 2015 Underground Film Festival, and was screened at Boston’s Irish Film Festival and Seattle’s Irish Reels Film Festival.

The festival, in a normal year, attracts over 30,000 revelers travel to Derry on Halloween night to see the parade, bonfires, fireworks, and dance performances. Their outlandish costumes have their roots in Celtic tradition, recalling a time when, at the end of the harvest season, the veil between this world and the next was believed to be at its thinnest, and risk of being spirited away was high. “People had to disguise themselves to hide from the dead,” the film’s narrator explains. “There was a danger that the dead would have their revenge on anyone who wronged them in this life.” 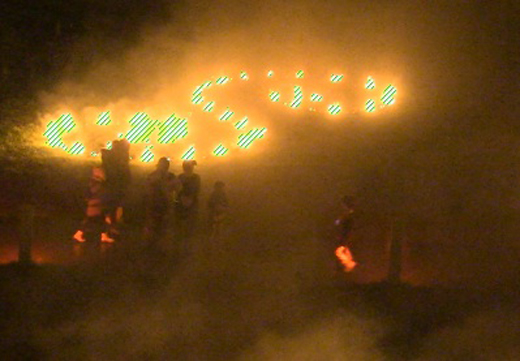 The ritual of Halloween dress-up took on a new meaning one night in 1982, when Derry’s Castle Bar manager Tony Toland invited patrons to arrive in costume for small prizes. “The army was everywhere in those days,” he says. “Checkpoints here, checkpoints there. So I thought a party would be a good thing then.”

“From that small activity, it began to grow,” says customer Damian McAteer. “The following year, more people arrived. It spread out like a wave throughout the city. This threatened no one. It encouraged everyone. It allowed people to step out of the days that were bordered by difficulty, into a better land of fantasy, even if only for a few hours.”

Dr. Jenny Butler of the Folklore and Ethnology department at University College Cork states in the eight-minute video that Celtic cosmology emphasizes a balance between light and dark. During the Troubles, the Derry Halloween Carnival honored this balance by creating a night of distraction and playfulness.

“It wasn’t just about dressing up,” McAteer says. “It was a means of releasing tension which reached back into a time when no one that would be alive could remember. […] It allows people to commune on a level that is without boundaries.” ♦

Watch the video below:

The 2020 Derry Halloween festival will take place virtually this year. Learn all about the festivities that start on October 28th.

One Response to “
Spirit of Samhain”