Sláinte! The Gentleman Who Pays the Rent

Edythe Preet’s first of a two-part series on the Irish pig.

Whenever I travel to a place I have visited before, the first thing I do is make a beeline for a foodie treat found only there. In Hawaii, it’s Spam musubi, a sushi-like morsel of seaweed, rice and WWII’s famous canned meat. In Italy, it’s a slice of pepperoni pizza. In China, it’s a fluffy barbecued pork dumpling. In Ireland, as soon as I clear customs, I head for a snack vendor selling freshly baked sausage rolls.

Clearly, pork is a primary ingredient in my favorite international treats. Not surprising, as pork dishes top the list of popular foods in many nations. And Ireland is no exception Pork has been a mainstay of the Irish diet for more than 7,000 years.

Ireland’s first pigs were actually wild boars that crossed to the island via a land bridge from Europe just as early humans did. These fierce tusked animals were afraid of nothing. In the Fenian tale “The Pursuit of Diarmaid and Grainne,” a wild boar caused the death of the hero Diarmaid atop craggy Ben Bulben (County Sligo).

In the old days a wild boar hunt proved a man’s valor and social rank as well. At the post-hunt feast, a leg was served to the king, a haunch to the queen, and the most valiant warrior received the succulent carath mhir, the “champion’s share.” Sometimes hunt fever extended into the meal. In the 9th century tale “Mac Datho’s Pig,” Cet mac Matach won supremacy over all Ireland by challenging the gathered men to “endure battle with me, or leave the pig for me to divide!”

Once Ireland’s ancient people learned to farm, they domesticated cattle, sheep and pigs. Cattle provided meat, but were even more valuable for a continuous supply of dairy products. Sheep were prized for their meat and also their wool that was spun and woven into blankets and clothing. Both cattle and sheep were grazing animals and the herds were moved between pastures by cowherds and shepherds. Pigs, on the other hand, were raised primarily for meat, required little care and could eat almost anything. They foraged the vast Irish woodlands and from Lughnasa (August) to Samhain (November) feasted on beechnuts, acorns, hazelnuts, and chestnuts – tree foods that were plentiful in early autumn.

Even though pigs were allowed to roam somewhat freely, left completely unguarded their “rooting” behavior could easily destroy farmland. The seventh century Brehon Laws frequently mention pigs. The damage they could cause was the worst of all farm animals and “for the trespass of a large pig in a growing field, the fine was one sack of wheat.” If pigs tore up grazing land, the laws required they must be penned “until two horses could graze without getting mud on their teeth”. The Brehon Laws didn’t just stipulate fines that would be imposed if swine went walk-about and misbehaved; they also required pigs to be “kept in fenced pens at night.”

Like cattle, the number of pigs a chieftain owned represented a significant part of the royal assets. By preventing the pigs in his charge from straying too far afield and rounding them up at slaughter time, the swineherd guarded his lord’s wealth and regional borders. Thus the position of swineherd was a very important job, requiring not only herding, hunting and trapping skills, but also bravery and cleverness, as semi-wild swine turned savage when cornered.

While Irish kings owned many pigs, having just one or two was key to survival for commoners. Pork was the usual protein served at those infrequent times when meat appeared on an impoverished laborer’s table. Plus, a sow’s offspring and a farm’s pork products could be sold at village markets and were acceptable payment for living on and cultivating a landholder’s property. For that reason, the pig came to be known as “the gentleman who pays the rent.”

Due to the importance a pig had in a tenant farmer’s revenue stream, keeping the “gentleman” safe was vital. It was common for the family pig to occupy a cozy straw-strewn corner by the hearth inside the house, much like the family dog. Another good reason for having one’s pig live indoors was the fact that landowners often levied extra tax on an outdoor pig sty claiming it was an additional structure.

Tending the family pig was women’s work. While a pig gorged in early autumn on foraged acorns and other nuts, throughout the year women fed their charges on meal preparation scraps plus buttermilk from the family cow. When the potato arrived in Ireland and every cottage planted a potato plot, women supplemented their pig’s food with leavings from cooking the daily spuds. Such a healthy diet guaranteed pigs would be fat and meaty by slaughtering time on November 11, St. Martin’s Day.

A County Kerry folktale explains how St. Martin “invented” the pig. Long ago, the saint asked a farmer what animal ate the chaff from his grain harvest. The man replied “none,” because he only had cattle and they wouldn’t touch the stuff. So, St. Martin gave a serving-girl some fat to put under a tub. Next day when the tub was lifted, to everyone’s amazement, there lay a sow and twelve piglets!

Slaughtering a pig was men’s work. Whether the local butcher or the man of the house performed the task, it was a strenuous bloody job. But in rural Ireland slaughtering a pig was an autumn ritual that would fill larders for a while, and the feast that followed the work was a joyous social occasion. For that night, at least, every belly would be full. 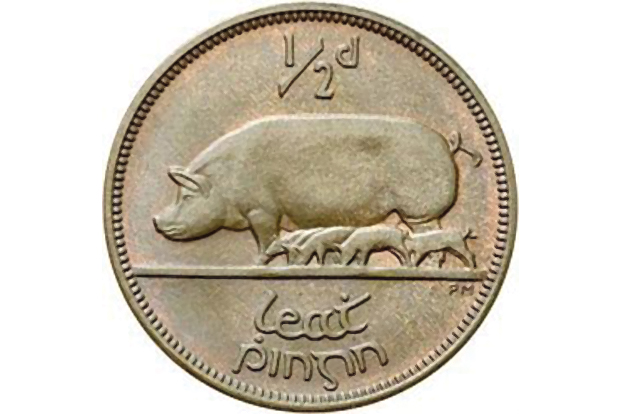 A 1935 Irish half penny depicting a sow with piglets.

The Boar and Sow in Irish Mythology

In ancient Celtic mythology, the boar represented fighting spirit, bravery, command, and control. A challenge to all hunters, this creature was powerful, vicious, hard to kill, and a fearless fighter that refused to give up even when facing a tougher opponent. As such, bronze Celtic battle horns were often fashioned in the shape of a boar, and their sound infused warriors with strength, energy and protection from harm.

In contrast, the sow, who always bore large litters of piglets, was revered as a mother-provider figure and represented fertility, sustenance, prosperity, and abundance. Saint Brigid, the Irish paragon of hospitality and generosity, is said to have kept a large breeding sow at her abbey. In medieval illustrated manuscripts, sows are often depicted with their piglets and beechnuts, which the druids considered sacred.

The boar was also an iconic Celtic archetype of overcoming death. In addition to their method of seeking food by digging into earth, the mythological entrance to the Underworld, wild pigs fed and fattened on the nuts of trees that, due to the way they shed their leaves in winter and grew new ones in spring, demonstrated the divine forces of rebirth. In this context, swineherds, who watched over the sacred pigs, were mystical links between the real world and the supernatural.

Prior to his escape from slavery in Ireland and introduction to Christian beliefs in Europe, Saint Patrick had served as a swineherd herding sheep and pigs. The 14th century Book of Rights contains a very old story called “Senchas Fagbala Caisil,” “The Founding of Cashel,” that tells how two swineherds had a vision that prophesied Patrick would return to Ireland and make Cashel the center of Irish Christianity: “While masting their swine… Durdru, swineherd of the king of Éle, and Cularán, swineherd of the king of  Múscraige… beheld a form as bright as the sun… and it said: ‘A good man shall rule over lofty and venerable Cashel in the name of the Father and of the Son of the Virgin with the grace of the Holy Ghost’.” 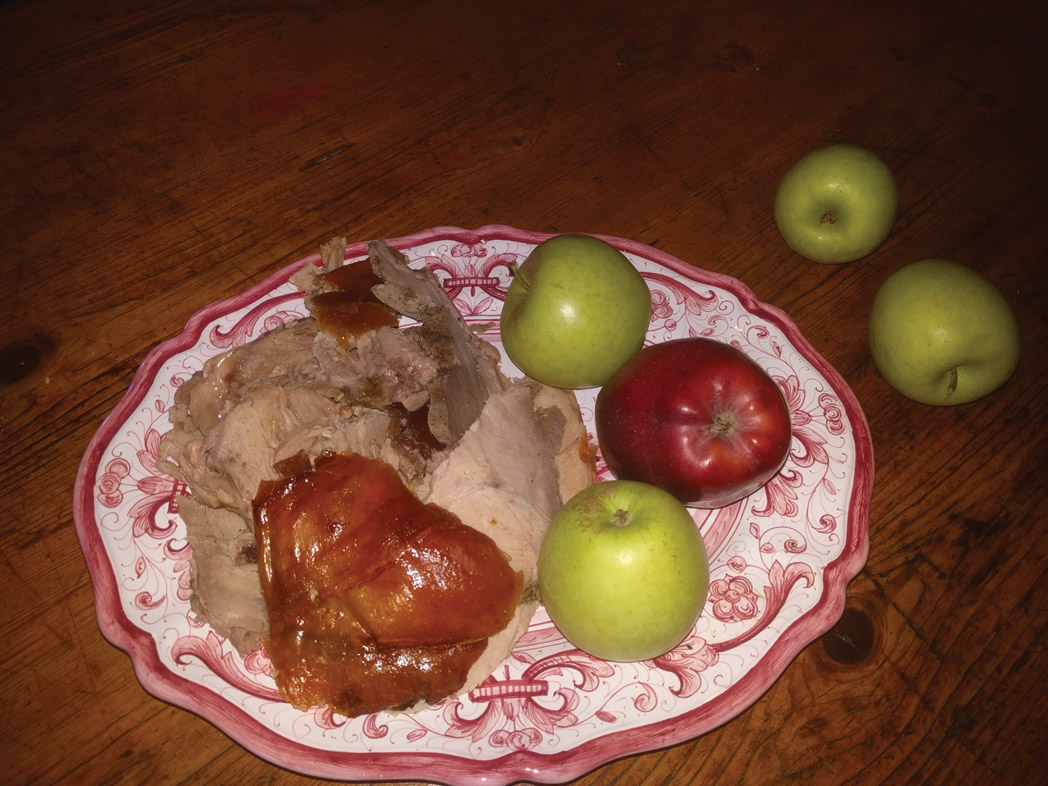 Preheat oven to 350 F. Rub the loin with salt and pepper. Place fat side up on a rack in an uncovered roasting pan. Roast approximately 2 1/2 hours (35-45 min. per pound), until a meat thermometer registers 185 F when inserted into the thickest part. Remove the roast to a serving platter.

Pour off the fat in the roasting pan. Add apple juice or cider to the pan and bring to a boil. Thicken, if desired, with a little flour mixed with water. Pour into a gravy boat and serve with the meat. Serves six.

Note: In ancient times, a haunch of pork would be roasted over an open fire. Ovens and meat thermometers guarantee a perfect meal.

Place apple chunks and water in a stainless steel or enamel soup pot. Cover pot with a lid. Cook on medium heat, stirring occasionally, until apples are soft. Mash, but leave chunky. If there is too much liquid, remove lid and cook until some of the liquid has evaporated. Serve with roast pork. Serves six.

This article was originally published in the October / November 2017 issue of Irish America.