Photo Album:
As My Mother Would Say

Jim’s mother and friends in a photograph taken at the Jersey shore in early 1920s. She is the second from the left.

Yes, my mother was Irish, and full of Irish sayings, and they came out whenever she was provoked by a situation requiring a fast one-liner. They were usually preceded by, “As my mother would say.” After hearing them for all those years, I will quote one when my situation requires, and attribute them with the same phrase.

My mother was a strong influence on my life, but not because she was Irish. Except for the one-liners, she did not wear her ethnicity on her sleeve. The neighbors would not have known we were Irish from any outward celebration of, say, St. Patrick’s Day. Although derived through her Irish heritage, it was her Catholicism that formed me. She was a Catholic to a fault. And the fault was her scrupulosity, which, thank God, I did not inherit. The Church requires, for example, that a member go to confession and receive Holy Communion at least once a year during the Paschal Season, from the first Sunday in Lent to Trinity Sunday. On the day before Trinity Sunday my mother would head for the car saying, “I hope this priest has a sense of humor.” The next day she would receive Holy Communion. I finally convinced her that she was not so sinful that she could not receive every week and have to confess more than once a month.

There were other singularities in her life. After graduating high school she took a job as a secretary in an iron foundry where she met my father, 15 years her senior, who was the foundry superintendent. He was a widow with six children, three boys and three girls. The oldest, a girl, was already married and had one son. The youngest, also a girl, was born in 1918. Soon after giving birth, her mother died in the Spanish flu epidemic. So, upon marriage in 1925, my mother became the stepmother to my father’s brood. It wasn’t easy. 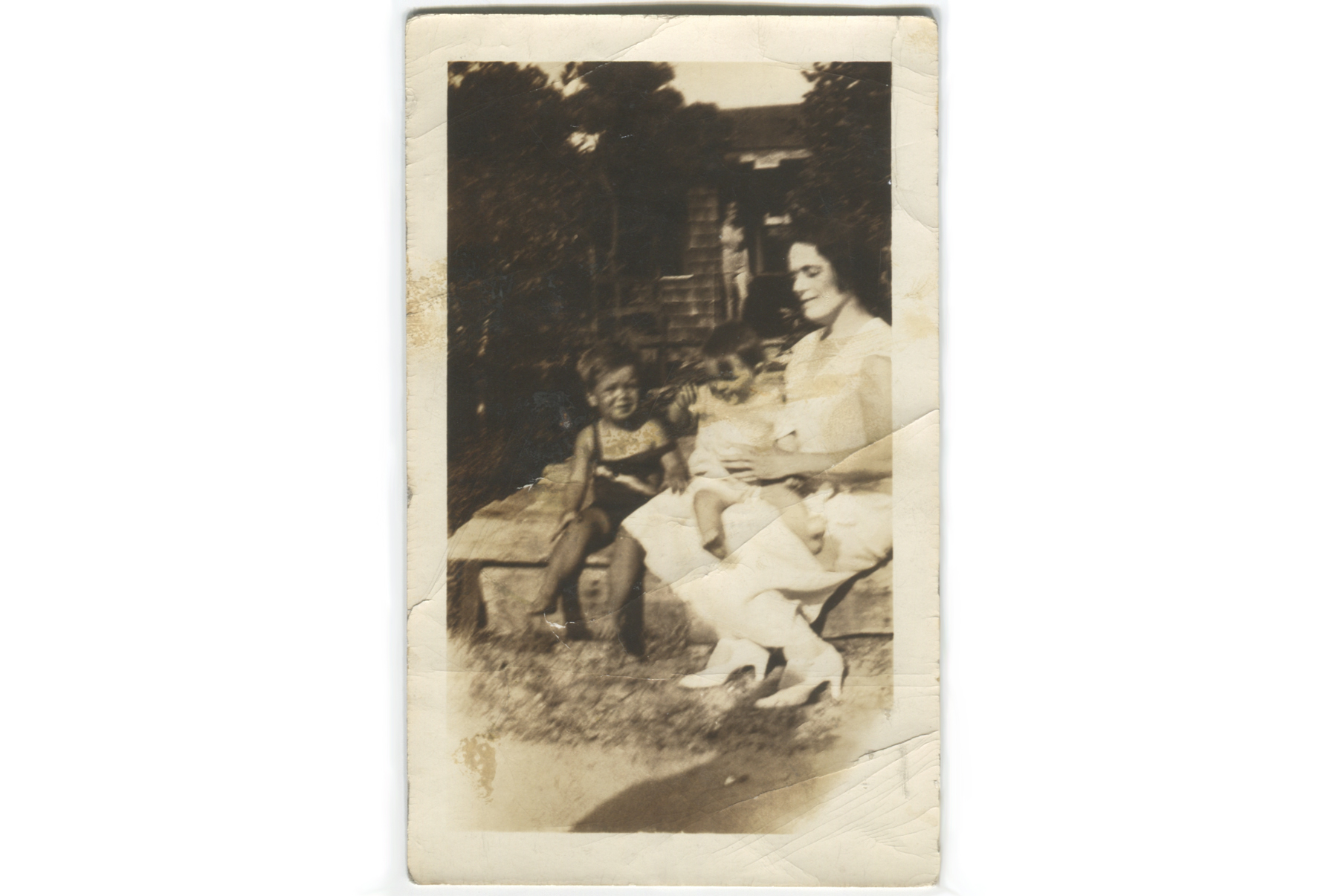 Young Jim Dette (left) and his brother with their mother.

Before writing this piece, her Irish wit was not the first thing I thought of with respect to my relation with my mother. I had the typical relation of a suburban mother and son, but it was partially affected by her role as stepmother. When my youngest (half) sister married and left the house, a load seemed to have been lifted, and as I gathered the one liners with the help of my younger brother (there were just two of us) I began to see the wit she truly was.

My favorite one-liner, and I don’t know the circumstance for which it was invoked, is the equine paradox, which states, “There are more horses’ arses in this world than there are horses.” On the occasion of going to the bathroom, mother would likely say, “I’m going to shed a tear for the poor orphans in Ireland.” Some were bordering risqué like, “Two heads on one pillow.” Reflecting on some recent incident, she might likely say “I haven’t seen; or heard; or done; that since Hector was a pup.” Observing someone whose attention is entirely devoted to accomplishing a task like threading a needle, she would advise, “It’s all in the way you hold your mouth.” And for the conclusion of a brief comment by a third party, “Short and sweet, like a roasted maggot.” And commenting on another’s ethnicity, “He’s as Irish as Paddy’s pig.”

She also had a number of comments that were entirely her own. Upon the occasion of a bird desecrating her laundry, she declared, “There never was, nor ever be, a constipated bird.” Upon hearing the latest proclamation from the Vatican II Council, she remarked, “I hope when I die, I’m still a Catholic.” Another one is, “Fools’ names and fools’ faces always appear in public places.” This has come to my mind on too many occasions in my eventful life.

She was full of them, and I am richer for it, though admittedly, this is partly due to my ignoring one of her one liners on marriage: “If you wait until you’re thirty, you’ll know enough not to.” I was 32 when I married. It was the best decision of my life. Evelyn and I shared our Catholic faith and a need for adventure. We spent two and a half years in Ecuador with the Association for International Development, a Catholic lay missionary group headquartered in Paterson, New Jersey. Two of our children were born there. Since our return 50 years ago, we’ve been very active in our parish and community. And as my mother would say, “You’re more Catholic than the Catholic Church.” ♦

Jim Dette previously published an article on his grandfather James Burke, written from the voice of his mother, which appeared in the October / November 2013 edition of Irish America.