The Heights Bar, where the massacre took place. “I hope there are arrests as a result of this,” director Alex Gibney told Irish America. (Photo: Courtesy Loughinisland Films)

Award-winning filmmaker Alex Gibney has made a new documentary investigating the 1994 Loughinisland Massacre in County Down that killed six, and for which there were no arrests.

Many Irish on both sides of the Atlantic have vivid memories of June 18, 1994. It was on that sunny afternoon, at what was then called Giants Stadium in New Jersey, when the Republic of Ireland stunned Italy with a 1-0 victory in the first round of World Cup play.

What may not be as well remembered, 23 years after this historic victory, is that the World Cup win was not even the lead story in many Irish newspapers the following day.

That’s because also on June 18, on an isolated road in County Down, armed men wearing masks walked into a pub and sprayed the room with bullets, killing six of the patrons who sat sipping pints and discussing the World Cup match. Another five were wounded. The Ulster Volunteer Force – pro-British Protestant paramilitaries – eventually claimed responsibility for the killings. The UVF said the pub was targeted because it was a known hangout for Catholics, and that the killings were retaliation for earlier shootings by the Irish National Liberation Army. 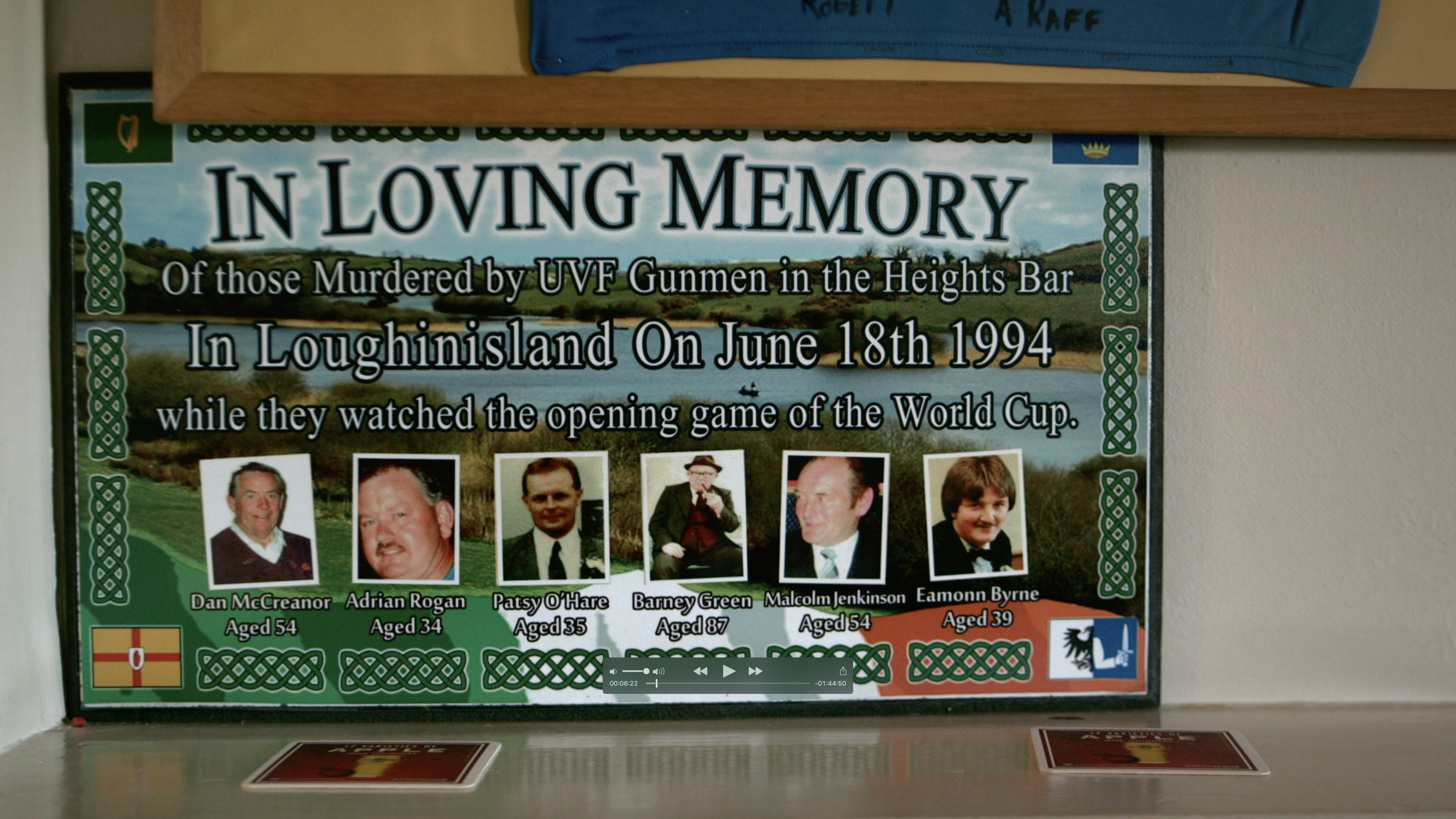 A banner commemorating the six who died in the shooting. (Photo: Courtesy Loughinisland Films)

What came to be called the “Loughinisland Massacre” severely dampened what should have been a gleeful day for the Irish all over the world.

It was a reminder that, while there was some hope for peace in the early 1990s, Northern Ireland’s sectarian troubles were far from over.

Worse, no arrests followed the gruesome killings. The victims’ families were left with terrible questions about who would have done such a thing to people who had no involvement in the North’s paramilitary sectarian struggles.

“You couldn’t have picked any more innocent [people],” says Aiden O’Toole, the pub’s bartender that evening, who himself was wounded.

The Loughinisland killings, and the subsequent botched police investigation, are the subject of an explosive new film by Oscar- and Emmy-award winning documentarian Alex Gibney. The film, entitled, No Stone Unturned, was screened at the recent New York and London film festivals, and will hit theaters on November 10. Gibney and his team of researchers in Northern Ireland have uncovered shocking new information about not only the killers, but about law enforcement authorities in both Britain and Northern Ireland.

“I hope there are arrests as a result of this,” Gibney told Irish America in a recent interview. “I think we make a pretty compelling case that there should be.”

He adds: “The people we’re naming…. If we’re right, they killed a lot of people.” 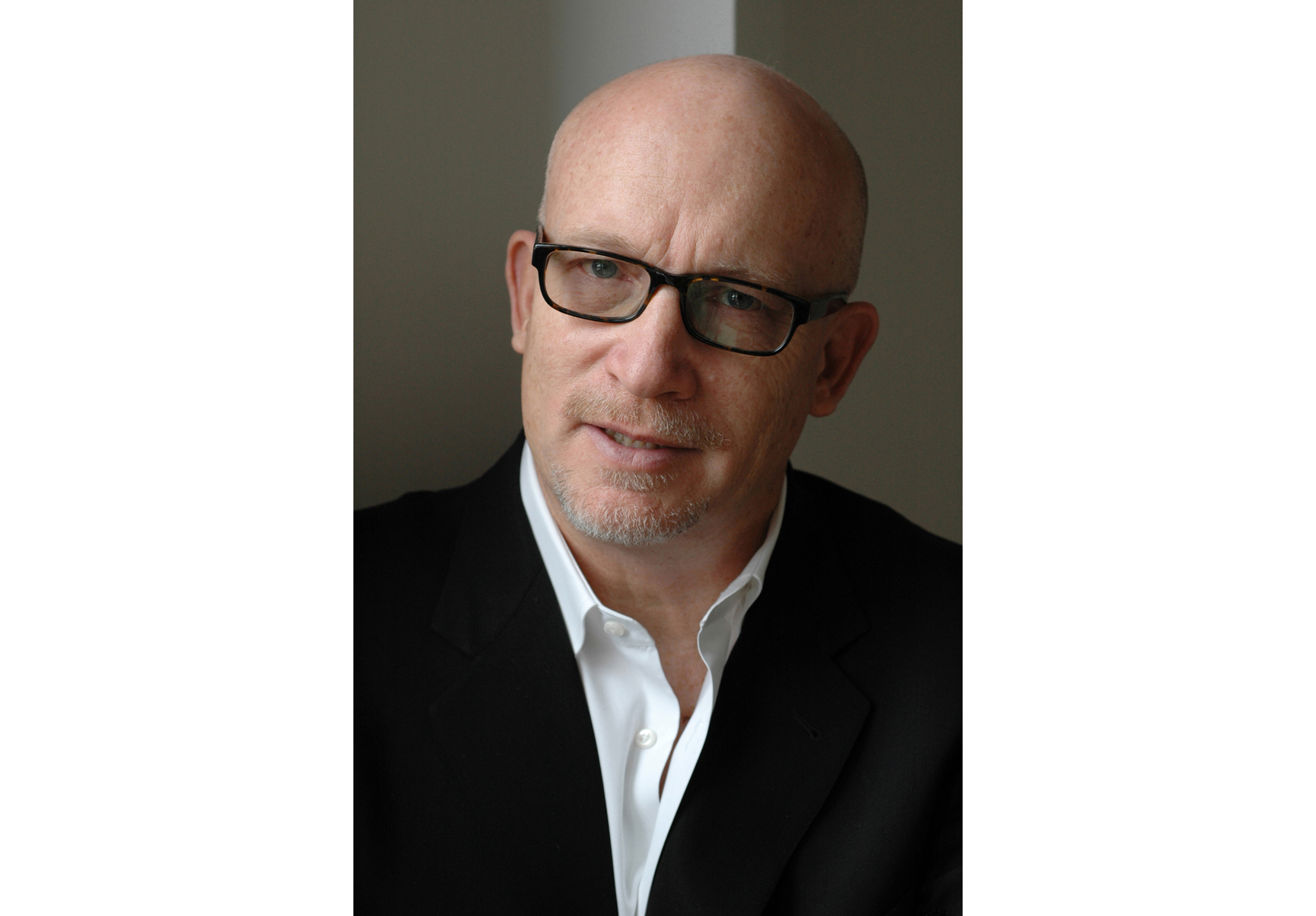 Gibney’s documentary comes just over a year after Northern Ireland police ombudsman Michael Maguire released a damning report, and declared, “I have no hesitation in saying collusion (between loyalist killers and British police officials) was a significant feature of the Loughinisland murders.”

Gibney discussed the making of No Stone Unturned, as well his some of his other acclaimed films, such as Mea Maxima Culpa: Silence in the House of God and Going Clear: Scientology and the Prison of Belief, while seated in his office in downtown Manhattan.

“I feel like we solved the mystery,” said Gibney, an Irish American who was raised Catholic in Massachusetts.

Initially, Gibney adds, he was merely interested in telling the story of the Loughinisland families, who spent decades grieving, with no answers about who might have killed their loved ones.

“There was a kind of melancholy in (the families)… a haunting melancholy,” notes Gibney. “It’s hard to move on when you feel there is something so brutal that happened to you and you don’t know why.”

Gibney first tackled the Loughinisland massacre in a short documentary made for ESPN’s acclaimed “30 for 30” series. But once that was completed, so many questions remained in Gibney’s mind that he wanted to take a longer look.

He adds: “And I’ve always been intrigued by mystery. Why this bar? Why this remote section of the country, which had little connection to the Troubles, or so we thought at the time.… We found out a lot of stuff we didn’t expect to find.”

It was not the first time Gibney’s work has taken him to Ireland. He also went there as part of the research for his dark epic Mea Maxima Culpa, perhaps the most comprehensive look at the pedophile scandal which rocked Ireland, America, and Catholic parishes all over the world. First aired on HBO, Mea Maxima Culpa won three primetime Emmy Awards as well as an Irish Film and Television Award. Going Clear, another HBO project, also won three Emmys in 2015. The highly-prolific Gibney also won an Academy Award for Taxi to the Dark Side (2007), while his Client 9: The Rise and Fall of Eliot Spitzer was nominated for an Oscar. Other Gibney films include We Steal Secrets: The Story of Wikileaks, Steve Jobs: The Man in the Machine, The Amstrong Lie, and, more recently, Zero Days (2016), which explores the frightening world of cyber warfare. 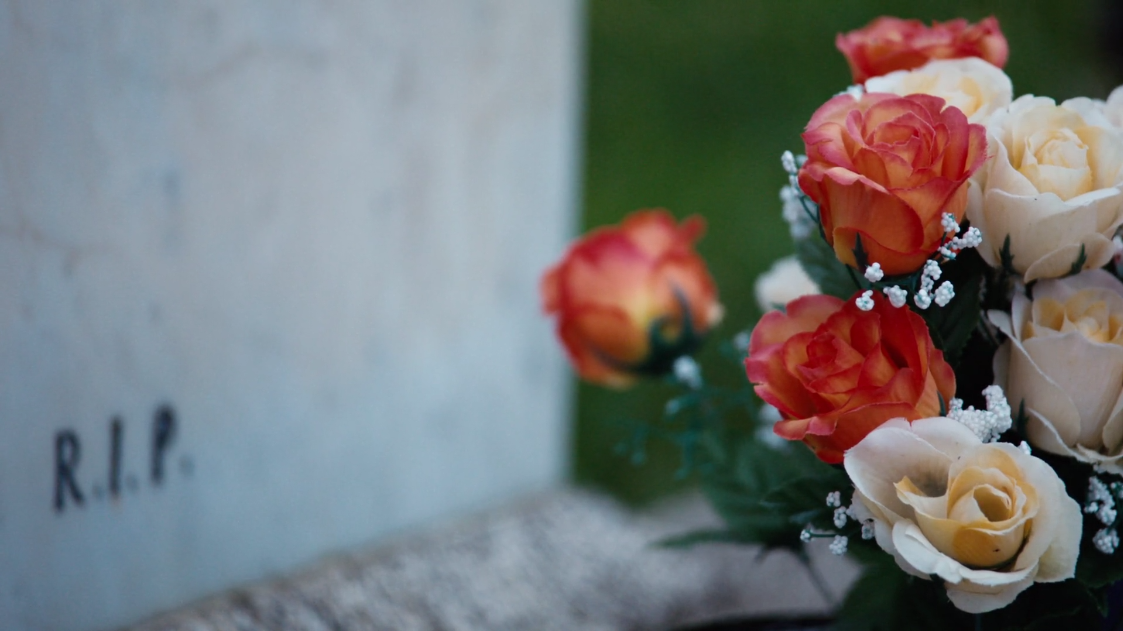 Flowers mark the grave of one of the victims. (Photo: Courtesy Loughinisland Films)

“Whenever I dig into some story, I go in with my eyes open. Maybe I’ll find out some stuff people didn’t know about before,” said Gibney.

Whatever viewers already do or don’t know about Loughinisland, one aspect of No Stone Unturned will certainly seem familiar to Irish Americans.

“This is very much a Whitey Bulger kind of story,” said Gibney, noting that police informants who end up beyond the control of their handlers – as notorious Boston Irish mobster Whitey Bulger did – are central to the story.

“One, possibly two, members of the gang who committed this atrocity were informants for the British Government” Gibney adds.

Gibney’s revelations should not only jar authorities in Belfast, but may also send shockwaves down the corridors of power in London.

“People in Great Britain will be sensitive to this because it involves collusion and government malfeasance. And secrets. Northern Ireland, like South Africa, like the West Bank, is a place where sectarian or racial violence has existed for a long time. The question is always, how do you move forward? But there’s also, how do you reckon with the past? That was one of the issues that drew me to this.”

This story, Gibney believes, also has deep relevance in the U.S. as well.

“America is still dealing very much with its past in regards to slavery and racial justice.” 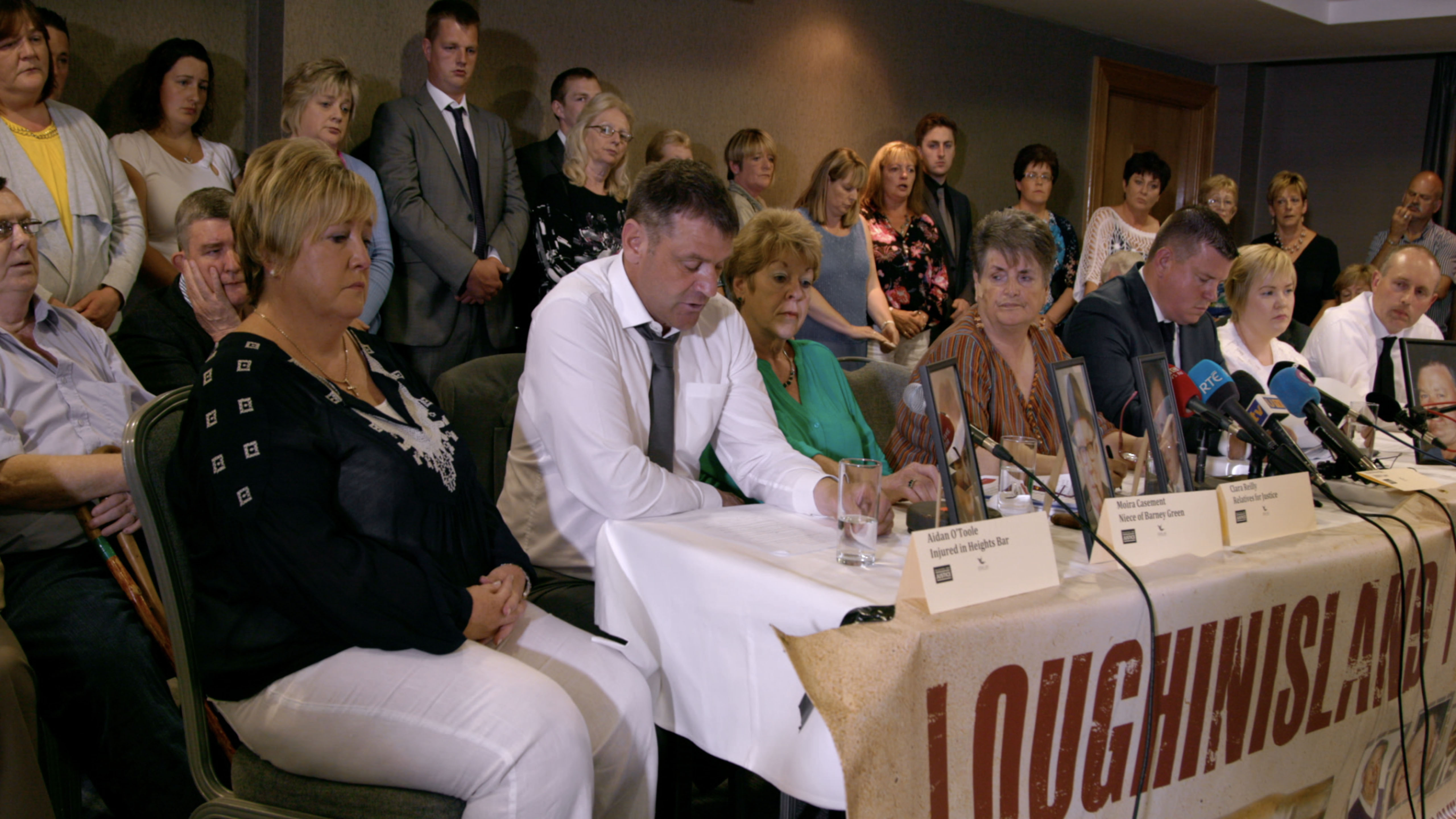 The families of the victims, including Aidan O’Toole, a teenage bartender who was injured on the night of the shooting. (Photo: Courtesy Loughinisland Films)

As much as No Stone Unturned is a gripping exposé, it is also a meditation on history and conflict, on healing and not being able to heal.

As the film notes, the Loughinisland killings happened at a time when there was actually hope for an end to the violence that had gripped Northern Ireland for three decades, and the island of Ireland for centuries.

In 1994, Sinn Féin leader Gerry Adams had already been granted a controversial visa by President Bill Clinton’s administration, with hope that a visit to the U.S. might seal the Northern Ireland peace process.

By early 1994, the IRA had even announced a “temporary cessation of hostilities.” There would be more death and destruction in the North, as negotiations ground on, and warring factions on both the nationalist and loyalist sides returned to violence. But by April of 1998, the Good Friday agreement was announced, eliciting cheers from large swaths of the entire island of Ireland.

Amidst the celebrations, however, there remained darkness. There was the infamous Real IRA bombing in Omagh in 1998, which left 29 people dead.

Then there was the lingering pain of those who lost loved ones in Loughinisland. Watching Gibney’s film makes you realize that for all of the joy the Good Friday agreements brought, they could not heal all of the wounds in Northern Ireland.

“Tremendous progress has been made,” Gibney notes. “But the markers of history are still clear in Northern Ireland.”

“So we beat on, boats against the current, borne back ceaselessly into the past.”

Gibney pauses, then adds, “If you don’t reckon with the past, it’s going to come back to haunt you.”

No Stone Unturned is an important step towards closing a very dark chapter in Northern Ireland’s history. ♦

Note: 8/31/2018:Two journalists involved with the documentary, Trevor Birney and Barry McCaffrey were arrested and then let go on bail in connection with the alleged theft of confidential documents that were used in the documentary.

One Response to “No Stone Unturned”