In 1978, Northern Irish punk rock band The Undertones released their debut single, “Teenage Kicks.” The track opened with the punchy and iconic lyric, “Are teenage dreams so hard to beat?” The answer was a resounding yes, and the song became an instant anthem for the followers of Northern Ireland’s punk movement. With a new exhibition at the American Irish Historical Society in Manhattan, “Punk Troubles: Northern Ireland,” curator and punk historian Toby Mott explains why.

“You have the London bands posing with their revolutionary, military style, but when you’re actually living in a war-torn environment, you don’t borrow those clichés,” Mott told Dazed magazine. “You don’t get Northern Irish punk bands mimicking the terrorism that’s going around them, because this was real.”

In the midst of a civil war that seemed to rage on forever in a latticework of car bombs, shootings, and hunger strikes, the punk movement offered the working class Northern Irish youth a unique way out. It allowed them to cast off the labels of Catholic and Protestant in favor of something as defiant and protective as the leather jackets they wore. Identifying as punk offered the young people of the North a second chance to define themselves. The punk generation dressed tough, acted rowdy, and wrote songs and printed zines with every ounce of the hot-blooded irreverence that had bubbled beneath the surface for so long.

Best known as the curator of the Mott Collection, an archive of U.K. punk rock and political ephemera, Mott was born in London and was a founding member of the Anarchist Street Army, a collective of young punks from inner city schools united by the ethos of bringing chaos to the London streets in the late 1970s. Later, he founded the radical art collective Grey Organisation. 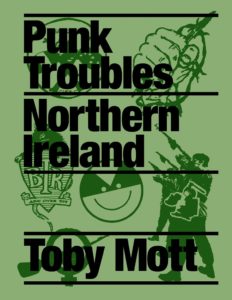 The exhibition is complemented with the release of Mott’s book by the same name, designed by Jamie Andrew Reid and published by Dashwood. Together, they aim to create appreciation for the inclusive, secular space created by the punk subculture in a territory in which the hatred of the Troubles was always in the foreground. A variety of record sleeves (featuring bands such as Stiff Little Fingers, Ruefrex, and Big Self), posters, and authentic designs will be displayed alongside political propaganda from the time to evoke the relationship between the movement and its setting.

“Punk is a creative space,” Mott said. “I think that everyone agrees it was a creative high point in both British and D.I.Y. culture. But in Northern Ireland, it was much more significant. Punk, of all of the ironic places, was somewhere to escape violence and escape the sectarian division.” ♦

3 Responses to “Weekly Comment:
Punk and the Peace Process
”

Leave a Reply to IrishAmericaEditor