There is something fitting about where Malachy McCourt is calling from as I speak to him about his dark and hilarious new book Death Need Not Be Fatal.

McCourt is at a Manhattan rehabilitation facility, where he will spend the next few weeks recovering from a “severe attack” of gout.

Initially, he says, “The pain was so awful.”

For the next few weeks, as he recovers, McCourt will spend his days moving around very carefully and doing light rehabilitative exercises.

“All the things little babies love to do,” he says with a laugh. 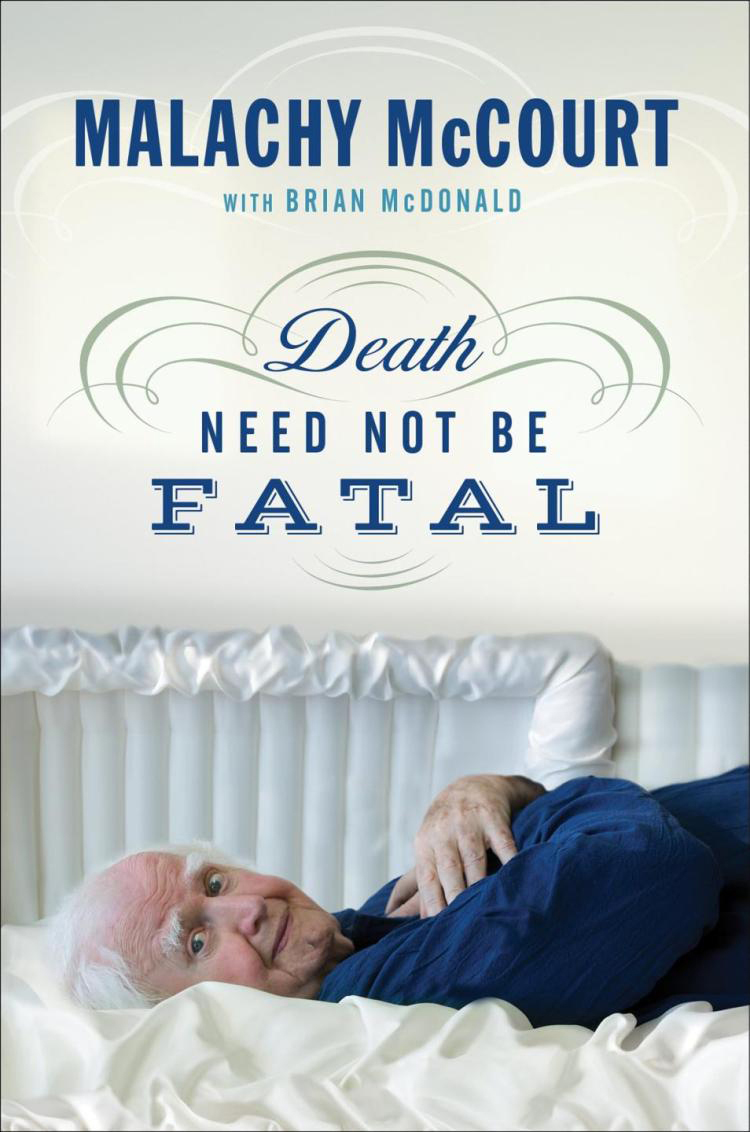 In September, McCourt turns 86. He is the last living child born to that resilient literary heroine Angela McCourt. His now-famous youth – in Brooklyn as well as Ireland – was scarred by poverty and death. His adult years brought some material comforts, thanks to numerous books, and acting roles on the stage and screen. But friends and family, including beloved brothers Alphie, Mike, and of course Frank, are passing at a ferocious rate.

So perhaps it’s no surprise that McCourt would write a book not only about death, but that essentially taunts the Grim Reaper with a very powerful and very Irish weapon – humor.

“It’s like Mark Twain said,” notes McCourt, “‘I do not fear death. I had been dead for billions and billions of years before I was born, and had not suffered the slightest inconvenience from it.’”

McCourt credits a chat with New York Irish American author Brian McDonald (My Father’s Gun, Last Call at Elaine’s) for inspiring Death Need Not be Fatal and helping to shepherd it into print.

McDonald, credited as co-author, ended up listening to and organizing various thoughts McCourt had written, ultimately getting the words onto the pages.

Early in the book, a darkly humorous meditation on mortality combined with tender, uproarious anecdotes from his immensely colorful life, McCourt writes: “As I am in my eighties… and there are far fewer tomorrows ahead and more yesteryears behind, I am essentially hanging out in the departure lounge, waiting for the call to board the last transport to somewhere.”

This is, of course, a particularly Irish take on what Shakespeare, in Hamlet, called “the undiscovered country.”

“We’re the only race that celebrates the wake and mourns the marriage,” Malachy says.

In Death Need Not be Fatal, we revisit the horrific death of Malachy’s infant sister Margaret Mary, in Brooklyn, and the more recent search for the poor, dead child’s remains. Then there’s the family’s return to Limerick, which had “cornered the market on death, destitution, and despair.”

“Frank once said that it felt sometimes like we belonged to the death of the month club.”

This book may not be for you if you are sensitive about things like, say, organized religion. Or right wing politicians. (“People are getting it wrong,” McCourt says about the 2016 presidential election. “Hillary was e-lected, Trump was se-lected.”)

But we also get Malachy’s teenage years in England, where he “shoveled coal into a furnace all night like O’Neill’s Yank in The Hairy Ape.” After journeying to America, there’s time spent on the waterfront, as a longshoreman, in Manhattan and New Jersey – though not Brooklyn, “the province of the Italians, who would say to me in no uncertain terms, ‘No Micks allowed here.’”

In the decades that followed, Malachy ran bars, acted in movies from The Molly Maguires to She’s the One, in soap operas such as Ryan’s Hope, and wrote a play with his brother called A Couple of Blaguards, which is still being produced.

His memoirs A Monk Swimming and Singing My Him Song were best sellers.

McCourt still writes every day, when he’s not strolling in the park or meditating with his beloved wife Diana, whom he’s known for over 50 years now.

These days, McCourt finds himself missing the sense of humor he and his brothers all shared. But he still loves spending time with his four children, as well as his grandchildren. That is what he is most looking forward to when he completes his recovery from gout.

McCourt, it seems, is taking his own advice, offered near the end of Death Need Not be Fatal: “Live each day as if it’s you last, and one day you’ll be right.” ♦

N.B. McCourt was awarded the inaugural Origin in Bloom Literary Award at the theater company’s annual Bloomsday Breakfast at Bloom’s Tavern in New York City. “There is no better champion for artists, the arts, the little guy, and the big-hearted than our dear friend, Malachy McCourt,” Heslin said. “That is why this award is so meaningful to us. Though he always brushes these kinds of things off, Malachy deserves our undying love for all that he does.” Bloomsday is celebrated in honor of James Joyceʼs landmark novel Ulysses, which follows the day-long wanderings of Leopold Bloom through Dublin on, June 16, 1904.