Participants at the 2012 Irish America Fest in New Ross re-enact a scene from the Boston Tea Party in the town harbor. (Photo: Facebook)

For the fifth year running, the County Wexford town of New Ross will mark American Independence Day with Irish America Fest, a three-day celebration of transatlantic friendship and legacy beginning this weekend on Friday, June 30. The festival, held in association with the Wexford Co. Council, Failte Ireland, and Irish America magazine, will provide entertainment of activities for those of all age groups to commemorate the birth of the United States with an Irish flair.

At 12pm on Saturday, July 1, a puppetry performance of Red Riding Hood will be presented by New Ross & District Chamber, Wexford County Council, and Moone and Sixpence Puppet Theatre. The show, which calls for plenty of audience participation, features a talkative trash can with an environmentally-friendly message. Saturday will also see New Ross play host to this year’s Official Republic of Ireland’s Strongest Woman competition, with 20 of the country’s most powerful weightlifting athletes competing over five events to take home the Trish Porter Memorial Trophy. The musical acts of the day are Irish language singer-songwriters The Carty Sisters, acoustic folk twins The Ocelots, and 35-year-old Irish music mainstays Bagatelle, famous for their 1998 hit “Summer in Dublin.” 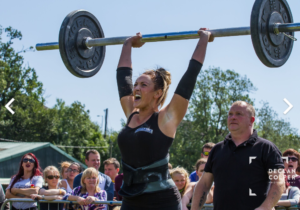 Sunday, July 2 promises another fun-filled day with a healthy lunch and afternoon of family games such as penalty shoot-outs, crazy golf, and archery at “Picnic in the Park.” Performing later that day in the town park will be much-lauded Kildare native Jack L with his new show, “Magic Days.” 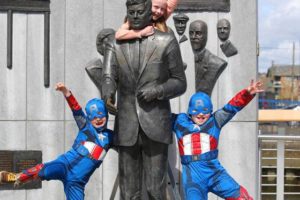 The amusement rides of McFadden’s Funfair will settle along the quayside of New Ross for the entirety of the weekend, adjacent to the Ross Food & Craft Fest, which features creative bites from Masterfood Ireland, Passion Nuts, Mr. Muffin Man, and Cloonagh Smokin’ Soul, among others. Handmade souvenirs can be purchased from local businesses such as Slate Creations and Myan Aloe Vera. 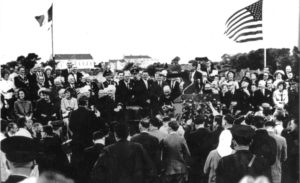 “Town Crier” Joe Delaney practices reading from the Declaration of Independence prior to the 2013 Independence Day celebrations in New Ross. (Photo: Mary Browne)

Even after Irish America Fest comes to an end, the important ties between Ireland the U.S.A. will be remembered on at the strike of noon on July 4, when the Declaration of Independence is read at the Emigrant Flame, created from the ever-burning torch by the graveside of Irish American John F. Kennedy in 2013. Serving as a flame of hope and fortitude for all Irish emigrants, it symbolically fulfilled the promise Kennedy made before his assassination to “return to Ireland in the springtime.” ♦

One Response to “Irish America Fest in New Ross”