Window on the Past:
The Georgia Healys

In antebellum Georgia, the Healy children, born legal slaves to an Irish immigrant father and his black common-law wife, had to be smuggled out of the state to avoid being sold into slavery. Several would go on to become some of the first mixed-race high-ranking members of the Catholic Church.

Their father, Michael Morris Healy, was born on September 20, 1796. For some reason, he claimed to have been from County Galway, but his background was traced to Roscommon. He left Ireland in 1815 and, after entering the U.S. through New York he came to Augusta, Georgia, before settling in rural Jones County, Georgia, in 1818.

By means of persistence, good fortune, and the labor of slaves, he became wealthy. He would have had considerable prospects, but he never married – at least not legally. Rather, he entered into an unofficial marriage with one of his slaves, Eliza Clark. Her birthdate is uncertain but she was considerably younger than him: they likely began their relationship when she was in her late teens and he was in his mid 30s.

Though many landowners had physical relations with their slaves, it was unusual for a successful planter to make a slave his significant other. As to why he chose such a relationship, the most likely reason was that he genuinely loved her. And so their ongoing, committed, interracial relationship “violated perhaps the most powerful taboo of 19th century America,” as related by James M. O’Toole’s book Passing for White: Race, Religion, and the Healy Family, 1820-1920. 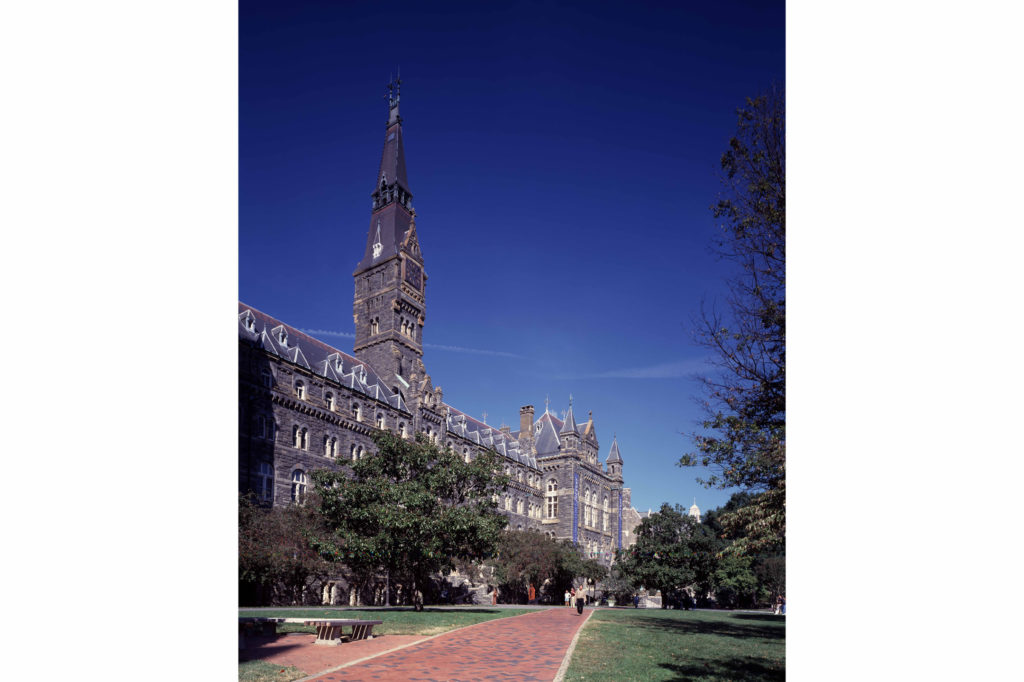 As noble as Healy’s affection may have been, the children of this union – ten in total, nine of whom survived to adulthood – would face a heavy burden. First and foremost, they were legally born slaves. The laws of Antebellum Georgia were stacked against people with any known or discernable degree of black ancestry. If a mother was a slave, her children were slaves, too. End of story. It didn’t matter if they had majority white blood.

Healy could not legally grant freedom to his own children. In fact, he technically could have been prosecuted for teaching them how to read. The Irishman knew that if his biracial children were going to succeed in life, he had to get them out of the 1830s South.

So, to the North they were sent. The elder children first attended a Quaker school in Flushing, New York. Several years later, four of the Healy brothers had enrolled at the College of the Holy Cross in Worcester, Massachusetts, and two Healy sisters were attending schools in New York City. The Healy children were good, eager students, finishing either at or near the top of their class. Having made it North, they stayed there. Time off from school was spent at the homes of the extended families of the priests they knew.

Following the January 1849 birth of the youngest child, Eugene, the Healys planned to relocate the whole family to the North. But this move never took place. Eliza Clark Healy – slave, mother, and unofficial wife – died on May 19, 1850. She was still young, most likely not even 40. The cause of her death is at this point unknown. Barely three months later, her former owner and heartbroken widower, Michael Morris Healy, followed her into the grave at age 53.

With both parents gone, one of the elder Healy sons, Hugh, headed down to Georgia – at great personal risk to himself (for he was technically a fugitive slave) – to rescue his younger siblings, who were especially vulnerable as both orphans and slaves. The rescue mission was a success, and all the Healys made it out of Georgia.

After graduating first in his class at Holy Cross, James Augustine Healy, the eldest son, entered a seminary in Montreal. He then relocated to Paris, where he was ordained in 1854. Returning to Boston, he served as a priest there for two decades and tirelessly worked with the city’s growing population of poor immigrants, most of them Irish. He was consecrated as the Bishop of the Diocese of Portland, Maine, in 1875. During his tenure as bishop, his diocese added more than 60 parishes and 18 schools and convents.

Upon graduating from Holy Cross, Patrick Francis Healy entered a Jesuit order. While in Europe, he earned a Ph.D. and was ordained to the priesthood in 1866. Returning to the U.S., he taught philosophy at Georgetown University, before becoming the school’s 29th president. His accomplishments for Georgetown were such that, according to BlackPast.org, he is often referred to as the school’s “second founder.”

After she was orphaned at age four, Eliza Dunamore Healy lived with her older brother, Hugh, in New York City. On reaching adulthood, she entered a convent in Montreal. Upon having spent decades teaching at several Canadian schools, she was appointed Mother Superior of a convent in St. Albans, Vermont. She ended her days at the College of Notre Dame on Staten Island, New York, where she died in 1918.

The only surviving Healy photographs are of four sons. Their complexions range significantly: Patrick Francis Healy, S.J., looks like an Irish Jesuit. However, Alexander Sherwood Healy – who served as a priest in Boston and well might have been consecrated as a bishop had he not died at age 39 – has visible mixed-race ancestry. And of indeterminable ethnic appearance is Michael Augustine Healy, the most successful of the children who did not enter the religious life; he became the first officer of black descent in the U.S. Revenue Cutter Service, the predecessor to the U.S. Coast Guard.

Most of the Healys were viewed as white, and official documents, such as death certificates, denoted them as such. When Mary Healy Cashman – an ex-nun who became a wife and mother – died on May 18, 1920, it brought the close to a remarkable generation made possible when, just over 100 years earlier, an Irish immigrant staked his claim on the Georgia frontier. ♦

6 Responses to “Window on the Past:
The Georgia Healys”