On Thursday, May 18, a plaque that signifies the 100th anniversary of the 1916 Easter Rising joined 193 other commemorative stones upon the interior walls of the Washington Monument, a 550-foot tall symbol of George Washington’s hopes for the American nation. Presented by Minister for the Office of Public Works and Flood Relief Seán Canney, on behalf of president Michael D. Higgins, it is the the first new plaque to be adhered to the monument since 1982. 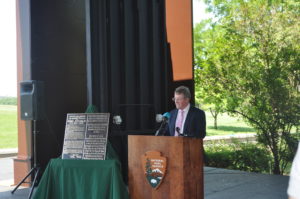 The dedication ceremony and presentation of the plaque, which remembers the struggle for Irish independence encapsulated by the 1916 Easter Rising. (Photo: courtesy of the Department of Foreign Affairs)

The plaque particularly honors Co. Waterford native Thomas Francis Meagher, a figure of the Irish fight for independence who, after being sentenced to execution for his involvement in the 1848 Young Irelander rebellion, was instead deported to Tasmania. He escaped to New York, where he had a hand in establishing the Irish News newspaper, and, when the time came, battled in the American Civil War of the 1860s on the side of the Union. He later became governor of the state of Montana. 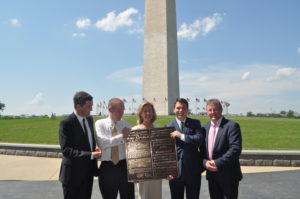 Ambassador Anne Anderson presents the commemorative plaque with the other attending dignitaries. (Photo: courtesy of the Department of Foreign Affairs)

“Meagher’s life is a symbol of the enduring links between Ireland and America,” Canney told the Irish Times. “He is an example of someone who came from Ireland, made his way to America and became a leading figure in American politics, qualifying as a lawyer and leading the Irish brigade in the American Civil War.” 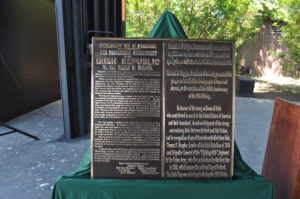 A close-up shot of the plaque, which bears segments of the 1916 Proclamation. Its inscription is presented in both English and Irish. (Photo: courtesy of the Department of Foreign Affairs)

At the time of its completion in 1885, the obelisk was the tallest manmade structure in the world, and the memorial stones that adorn it have been contributed by states, cities, foreign countries, societies, and individuals. Varying in size from roughly 1.5 feet (Carthage, Texas) to 6 x 8 feet (Philadelphia and New York City), these plaques were intended to honor George Washington’s memory, though their inscriptions often derailed – for example, the plaque donated by the Templars of Honor and Temperance read, “We will not make, buy, sell, or use as a beverage, any spirituous or malt liquors, Wine, Cider, or any other Alcoholic Liquor.” Washington himself owned a whiskey distillery in Mount Vernon. 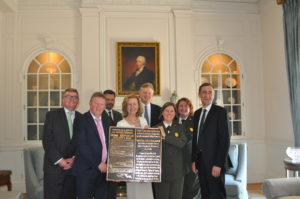 Attendees gather before a portrait of the first President of the United States, George Washington, to whose memory the Washington Monument is dedicated. (Photo: courtesy of the Department of Foreign Affairs)

Also in attendance were senator Mark Daly of Fianna Fáil, Mick Mulvaney, director of office and budget management under the Donald Trump administration, and U.S. congressman Brendan Boyle (of Co. Donegal lineage), who said that the plaque “symbolizes the unbreakable bond that will always exist” between the two nations. ♦