Sláinte! My Own
Personal Seanchaí

Edythe Preet writes about her father’s love of literature and storytelling.

June always finds me thinking about my father more than usual. It’s Father’s Day month, his birthday was the third, and strawberries, his favorite fruit, are in season. Naturally, his birthday cake was always strawberry shortcake. Dad loved strawberries so much that when he once visited me in Los Angeles during January and discovered abundant boxes of plump strawberries selling in the local market, he announced that might be a good enough reason to move here from Philadelphia. When I griped, “Hey, what about me? What am I, chopped liver?” he chuckled. “Aw, kiddo, you would be icing on the cake!” 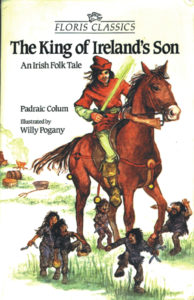 The King of Ireland’s Son, first published in 1916, is a collection of stories from the Irish oral tradition.

It was more than a decade after Dad’s passing in 1983 that I started writing Sláinte!, and he would have been as proud of me as he was of his Irish roots. As the years went by and articles flowed, I came to learn that those things I had always thought of as Dad’s “little quirks” were Irish to the core. Once, on a trip to Ireland during June, I discovered Wexford’s strawberries, so sweet they tasted like cotton candy, and learned Dad’s strawberry passion was probably genetic. He also loved potatoes, especially the little new ones, which he sprinkled with salt and pepper and chased with a glass of cold milk. More than once, he quipped that his mother “came from Donegal where they eat potatoes, skins and all!”

Another of Dad’s Irish-isms was our weekly Saturday breakfast feast, which consisted of eggs sunny-side-up, crisp fried potato chunks, sausages, toast with butter and strawberry jam, jelly donuts still warm from the corner bakery, and a cup of coffee with half-an-inch of cream floating on top just like whiskey drenched Irish Coffee. Hello! The legendary Irish breakfast!

But the most Irish thing about Dad, assuming we ignore his classic black Irish wavy black hair and always-twinkling blue eyes, was his love of words. One day long ago, I asked him what was his favorite color. Quick as a wink and without a blink, he said: “Sky blue pink!” When I harrumphed that was not a color at all, he responded: “You’ll figure it out some day.” I bedeviled him with that fantasy color all through my youth, but one evening when I was 24 and driving as the sun was going down, a glance in my rear view mirror revealed a sky streaked in glorious shades of blue and pink! Not a sunset since has passed that I do not remember his delight when I told him I had finally figured it out.

Dad’s love of words encompassed all forms of word games. When I was 10, he turned me on to word jumbles and crossword puzzles (which I still do every day), and he was a master Scrabble player. I’ll never forget the time he laid all seven of his tiles down and hit two triple squares at once for a score of 150 points! Try as I may, I’ve never matched that feat.

More than anything, though, Dad was a true blue Irish seanachie, a storyteller of the first order. Many were the nights that my bedtime stories were all about Suzanne, the talking horse, and Pico, the talking mouse, whom he often ate lunch with at the Philadelphia Navy Yard, or Whiskers the Cat, who played the organ when the churchmaster couldn’t perform for Sunday service because he had sipped a wee bit too much of the ceremonial wine.

In the old days before Church scholars adapted the Irish language to the Latin alphabet, introduced by St. Patrick (whose comparison of the shamrock and the Trinity was a pretty good tale itself), only the High Kings were more respected than the seanachies, for they were the walking talking encyclopedias of Ireland’s oral history, laws, myths, heroic sagas, and poetry.

During our summers at the Jersey shore, Dad was always surrounded by children who loved the poems he recited as much as I did. Mind you, these were no “roses are red, violets are blue” rhymes, but really long story poems. I treasure the 1930s pamphlet, “The Most Wonderful Collection of Famous Recitations Ever Written,” that contains most of Dad’s favorites. Its fragile newsprint pages are creased and tattered from the numerous times he read its contents and the years he carried it all over the Pacific during WWII. Inside are some of the best poems ever penned, some by famous writers, like Shakespeare (“All the World’s a Stage”), Robert Service (“The Cremation of Sam McGee”), and Rudyard Kipling (“Gunga Din”), and many more by numerous lesser known authors (“I Had But Fifty Cents,” “The Boston Burglar,” “Curfew Must Not Ring Tonight”). Some of the stories are true: “The Kid’s Last Fight,” subtitled “To a Glorious Little Fighter, Jimmy Brit – The Story of the Greatest Ring Tragedy,” and “The Blue Velvet Band,” which has an epilogue that reads “If anyone doubts that this is a true story, they can write to the warden of San Quentin Prison on Alcatraz Island.” And George Francis Burns, my own personal seanachie, memorized almost all of them.

Dad’s love of the written word did not end with poetry. The two hour commute he made twice daily on public transportation to the Navy Yard gave him a golden opportunity to read books, a passion I acquired by association. Every Friday night we hiked to the spot on the Avenue where the bookmobile parked, and we loaded up on reading material. He would pick out one hefty tome, and I would select a dozen or more children’s books.

Once I had consumed every fairy tale in the Philadelphia Library system, Dad decided I was ready for some Irish mythology. For Christmas 1956, he gave me a copy of The King of Ireland’s Son, which he had first read shortly after its publication in 1916. This collection of stories from the Irish oral tradition was compiled by Padraic Colum, a founding member of the Gaelic League, an organization founded in 1893 for the purpose of keeping the Irish language spoken in Ireland, and a leading figure of the Celtic Revival movement that encouraged the creation of work based on traditional Irish art and culture. Best of all, the tales contained in the green and gold covered book was the one about the adventures experienced by the King of Ireland’s eldest son as he journeyed far and wide “his hound at his heel, his hawk on his wrist, a brave steed to carry him wither he list, and the blue sky over him” in his search to find and win Fedelma, the Enchanter’s Daughter.

Two years later Dad gave me another literary treasure, Dorothy and the Wizard in Oz by L. Frank Baum, the Scots-Irish-American writer whose work was immortalized by the 1939 film The Wizard of Oz. Like many another young reader, Baum quickly became one of my favorite authors and over the years I collected many first editions of his books that to this day have honored places on my bookshelves.

My father had only one favorite Irish author: James Joyce, whose books always topped his reading list. He read Ulysses many times and, whether consciously or unconsciously, Joyce’s seminal work so influenced Dad that he and Mom were married on June 16th, the day on which Leopold Bloom, Ulysses’s main character, wandered through the streets of Dublin. And every year their wedding anniversary was another June date that was celebrated in our home. Sláinte!

No time to bake? It’s still possible to serve a show-stopping strawberry shortcake! 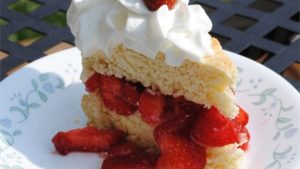 Slice the pound cake into upper and lower layers. Wash the strawberries, then remove the leaves and center stems. Reserve several perfect berries for decorating. Slice the rest into quarters, place them in a large bowl, mix with the sugar, and set them aside while you make the whipped cream. Pour the cream into the chilled bowl, beat until thick, then stir in the powdered sugar. Place the bottom layer of pound cake on a serving plate and cover it with chopped strawberries. Repeat with the top layer and more berries. Cover the top with whipped cream (sides too if there’s enough!). Slice the reserved strawberries in halves (they’ll look like hearts) and use them to decorate. Serves 6-8. Puddle extra sliced strawberries around the base of the cake, or save them for a snack!  ♦

This article was published in the June / July 2017 edition of Irish America.

2 Responses to “Sláinte! My Own
Personal Seanchaí”