Ed: Legendary New York City reporter Jimmy Breslin, who appeared on Irish America‘s second ever cover in January of 1986 (see below), died March 19 in Manhattan following a bout of pneumonia.

Born and raised in the Richmond Hill section of Queens, Breslin honed a brash wit and descriptive writing style that became known as New Journalism throughout the 1960s and early ’70s, though Breslin himself rejected the term. His writing, he said, was a combination of Dickensian narrative and the visual description necessary for sports reporting, where he got his start as a copy boy at the Long Island Press in the 1940s. He would go on to write for New York Journal-American, the New York Herald-Tribune, Newsday, and both the New York Post and Daily News, the latter where he spend the majority of his career.

Breslin too had a knack for finding the overlooked characters on the periphery of major stories. He wrote columns on the gravedigger for John F. Kennedy’s plot at Arlington who made $3.01 an hour; a single man, David Comacho, to document the AIDS crisis in the city in the 1980s; the scene in the kitchen when Robert F. Kennedy was shot. But he also took on the big guy, picking fights with figures and institutions as far ranging as New York Governor Hugh L. Carey, whom he took to calling “Society Carey,” to the Catholic Church.

In Irish America‘s 2010 Famine issue, we published a piece of Breslin’s called “Leaves of Pain,” originally written in 1977, that weaves from the Fairlow Herbarium in Cambridge, Massachusetts through the Famine, the 1863 Draft Riots (though at the time they took place they were known as the “Irish Riots,” Breslin noted), and ends with the murder and funeral of a friend in the do-or-die Bed-Stuy neighborhood of Brooklyn in New York’s bankrupt ’70s. The piece barely breaks 1,500 words. (Read it here in our digital edition.)

The following article is adapted from a speech that New York Times columnist Dan Barry, who wrote Breslin’s obituary for the newspaper, delivered at a tribute for Breslin at New York University in December 2009. It was originally published as part of the Times‘ “Times Insider” section, which features behind-the-scenes takes on how the news is made. It is republished here with the permission of Barry.

When I was a kid, my father would say: Read Breslin today.

Never: I love you.

The advice was good — and bad.

Good because I got to read the prose of this journalistic genius, Breslin.

Bad because, like so many other young reporters, I developed a Breslin tic. For example, I wanted every paragraph to end with one word:

Just the way Breslin used to end some of his paragraphs. But when I used this technique, it didn’t seem to have the same effect:

“The Zoning Board of Appeals endorsed a plan last night to build a Super Stop and Shop on Tolland Road. Beautiful.”

Now here is my Jimmy Breslin story; it’s a story about the person, not the character. And I’m not going to do a Breslin imitation. I can’t quite capture that voice, that voice that sounds like an altar boy who has swallowed broken glass.

About five years ago, Jimmy Breslin calls me and asks:

When do you have to go to That Place for That Thing? I’ll walk over there with you.

That Thing was a scary, unpleasant procedure I had to undergo. Of course, every procedure at Sloan Kettering is scary and unpleasant.

But I didn’t know what he meant by “walking over there’’ with me. In fact, I had never MET Jimmy Breslin; I had only talked to him on the phone.

Anyway, we arrange to meet on the Upper West Side. I am very nervous. Mostly about this procedure I am about to have. But also about meeting and walking with Jimmy Breslin.

I spot him. He’s easy to pick out of a crowd. I introduce myself. We start walking east. And he starts talking — about everything.

We’re now on the East Side. And I’m laughing. 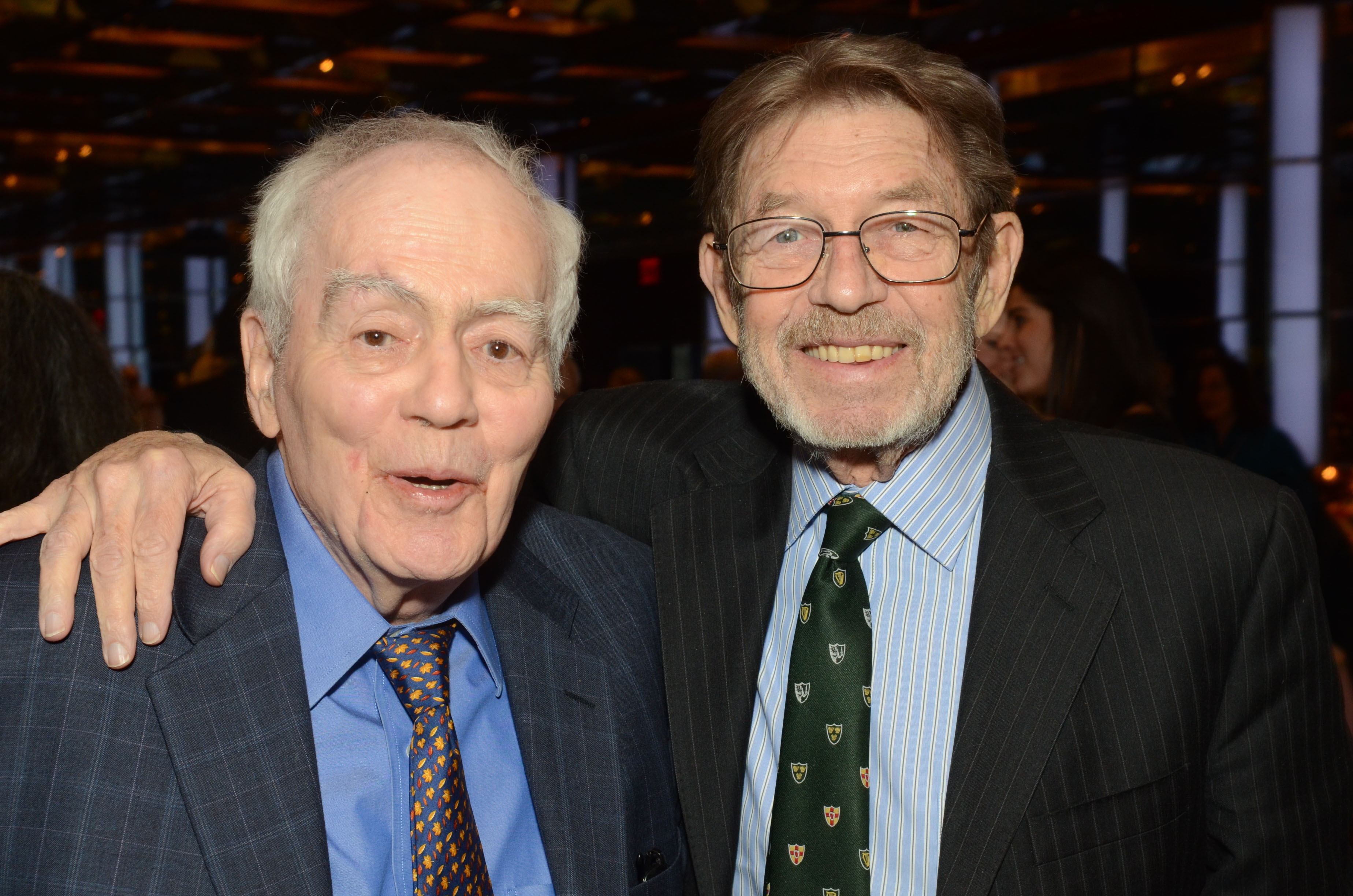 He talks about the war in Iraq. Bush and this goddam, goddam war.

We’re now in front of the hospital. That was quick.

My wife arrives, and I turn to say goodbye to Jimmy.

Instead, he comes into the hospital with us, and he’s telling funny stories now to the both of us.

I check in at the admissions desk, and Jimmy’s beside me, still telling stories. Great stories.

I go into the small locker room, get into one of those johnnies that leaves your ass exposed, come out — and there’s Jimmy. I sit down between my wife and Jimmy Breslin, and I’m the only one with my ass exposed.

Now he’s asking me what my column is going to be for Wednesday, which is two days away.

I say that I was thinking of taking the day off, considering this procedure and all.

Screw that, he says. Find something. Anything. Write it up.

The nurse is inserting the needle for the IV — and Jimmy is sitting beside her, telling the nurse and me that I have to find something to write. This is New. York. City.

Finally, I get onto the gurney.

I make room for Jimmy.

He shakes my hand, and only then does he leave That Place.

The next day, I’m walking around Manhattan, feeling sorry for myself.

Jimmy Breslin calls me: Whatta ya got for tomorrow?

I got nothing, I say. What with the procedure and all …

Screw that! he says. Look around you! Stories everywhere! Write it!

Only then did I realize what Jimmy Breslin had done for me on our walk to the hospital.

He had given me the gift of distraction.

He had filibustered away my fears.

What’s more, he had reminded me of my responsibility to write.

So I went back to the newsroom and wrote a column.

This story I just told you?