Forward the Music of the Gael

By Kristin McGowan, Contributor
April / May 2017

There’s more to piping than meets the ear. Kristin McGowan talks to Joe McGonigal, the highly sought after musician and teacher, about his upcoming plans and the influence of his grandfather on the growth of pipe bands in the United States.

Once the St. Patrick’s Day parade season is over, some pipe bands take a break for the next round of summer parades, while others gear up for a marathon of competitions that can stretch into the fall.

Joseph P. “Joe” McGonigal’s exceptional skill level and passion for the music, combined with an effortless ability to educate others with patience, clarity, and a gut-busting sense of humor, has made him a sought-after teacher of well over 10 pipe bands and hundreds of individuals over the years in the New York area.

“It’s glorious and noble music with a hell of a history, and it needs to be heard,” says Joe, a third-generation member of a bagpiping legacy spanning over 85 years.

Joe is at the helm of the St. Columcille United Gaelic Pipe Band, based in Kearny, New Jersey, and he currently has two contest bands – the flagship band St. Columcille, and a brand new Columcille School of Piping and Drumming in Grade 5 (bands compete in ascending skill levels, starting at Grade 5 up to Grade 1.) “We’re working toward bringing the band back to the North American championships, and in 2018, back to the world competitions in either Ireland or Scotland,” he told me when I sat down with him recently in his New Jersey home.

The McGonigal family’s path in piping began with his grandfather, Sean, in 1920s Scotland. The family emigrated from Donegal, into Gorbals, a tough neighborhood on the south side of Glasgow, where Sean’s cousin, Joe Egan, played with the St. Francis Pipe Band.

“If you were asked what school you went to and it started with ‘Saint,’ you were classified as a Catholic/Papist/Fenian,” but my grandfather was one of the first Catholics to graduate from the Scottish Master Painters Academy in Glasgow after a Protestant neighbor took him under his wing and got him into the school. That’s where he learned sign writing and painting, and he brought those skills with him to America.”

Sean, his older brother Joe, and his cousin Joe Egan arrived in Kearny, New Jersey, in 1929. It was here that Joe Egan encouraged Sean to trade his tin whistle for a bagpipe chanter and taught him to play. Together they were charter members of the Brian Boru Irish War Pipe Band of Newark in 1933, and a cultural and educational era began.

Wanting to learn new music and compete, Sean broke away from the group in 1949 to form the St. Columcille United Gaelic Pipe Band. During a time when pipe bands were either totally Scottish or Irish, in name, membership, and music, Sean decided to mix it up.

“He hated English government policies on Ireland and Scotland, and the divisiveness that between the Scottish and Irish working classes that he experienced growing up. He always felt that the Scots and Irish had a whole lot more to offer each other. He believed the pipe band world shouldn’t be strictly Scottish or Irish, but rather should be celebrating the great Celtic music together.”

Sean named the band after St. Columcille because he shared the priest’s mission of uniting the Gaelic cultures. Their first public outing was the Holy Name Society Parade in Newark, New Jersey, in October of 1949. Joe’s father, Patrick, was a senior in high school at the time and was part of the first generation of American boys to start learning the pipes. 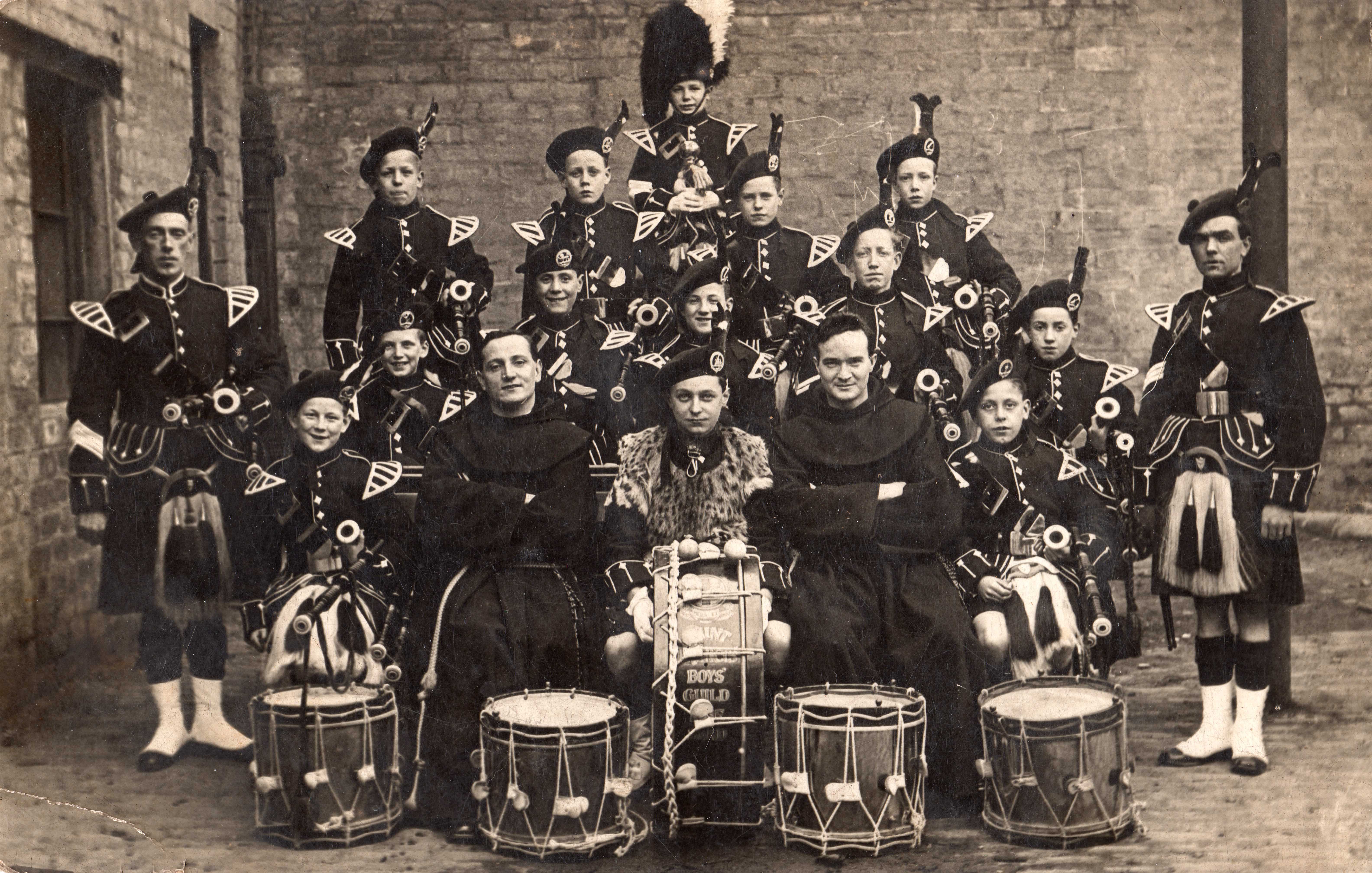 The band’s motto was, and still is, Ar Aghaidh le Ceol na nGael – “Forward the Music of the Gael.”

Many of the pipers in the United States in the 1950s and ’60s were Scottish or Irish immigrants, but Sean accepted anyone who was interested in learning and being a part of the piping culture and community. Through the years, St. Columcille has welcomed Jewish, Indian, and African American members, keeping it clear the band had but “one race, one religion, and that was good piping and drumming.”

“He would love what’s going on today with the great piping in Brittany and northern Spain where there’s a lot of cross-border influence happening. And he would love how the pipe band movement has grown in America.”

Grown in large part due to Sean’s efforts and innovations. Intent on spreading the music of the Gael, Sean had quite a knack for publicity. The band played on the Ed Sullivan Show, and the Ted Mack Amateur Hour. Cousin Joe Egan, Sean, and son Patrick played on Broadway in the original production of Brigadoon.

Finbar Devine, famed first Drum Major of the NYPD’s Emerald Society Pipe Band, received his first mace and feather bonnet from none other than Sean McGonigal.

In the late 1950s, Sean formed a college of piping in New York City, which was later featured in Parade magazine. Sean also teamed up with Cook Laboratories in Connecticut to record the band. Cook wanted the rare outdoor recording of moving music to test the company’s high-fidelity equipment. The result was one of the first albums of pipe music in America – Kilts on Parade (1950).

“It’s dreadful,” laughs Joe. “St. Columcille was a band at that time of mostly young boys – students! Attacks are horrible, the drones sound like swirling bees, and the old rope-tension drums sound like something from the 1700s. But it’s got its place in history and it was an example of my grandfather’s out-of-the-box thinking.”

The band members matured and a juvenile teaching band was formed under the St. Columcille umbrella. Sean wrote to and received permission from Jackie and Bobby Kennedy to use the Kennedy tartan for the newly formed John F. Kennedy Memorial Pipe Band in 1963. This was the band in which Joe McGonigal, his brother Michael, and cousin James, first marched. 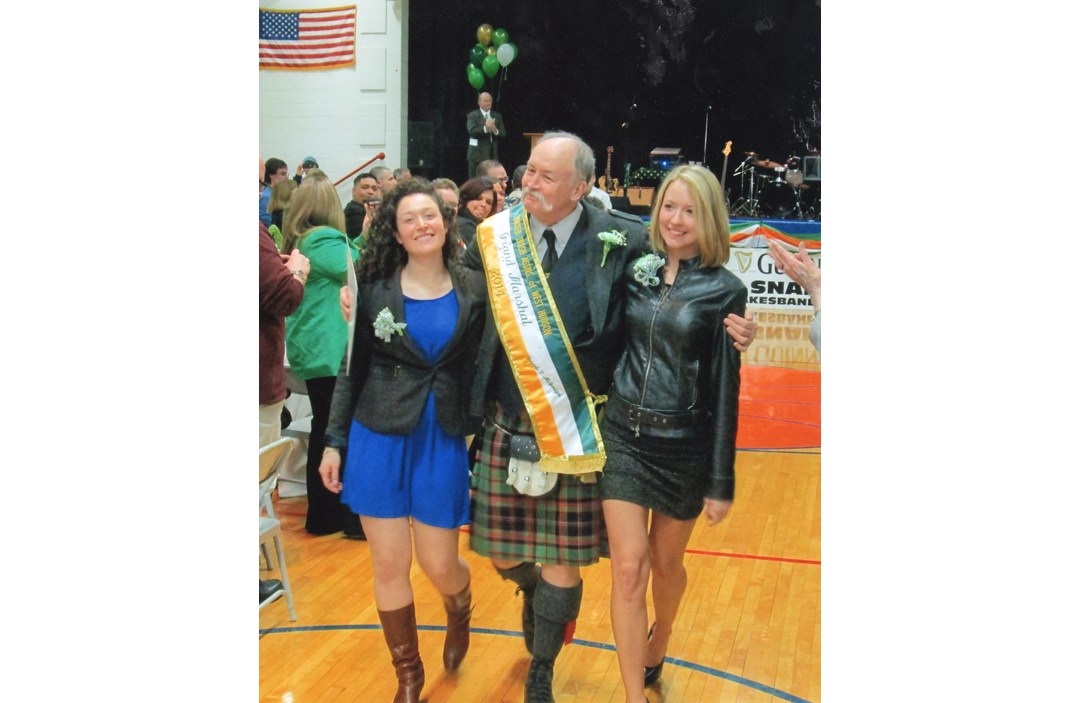 It was during the 1965 Memorial Day Parade up Kearny Avenue that Sean McGonigal, leading the JFK Memorial Pipe Band, died of a heart attack at 55 years of age, two blocks from the parade finish.

The boys of the JFK band grew up and into the next generation of St. Columcille. They brought piping into the Kearny Public School System in 1972 with the Brigadoon Pipe Band, under the direction of piper and longtime family friend Fran Raftery.

Joe, having been taught the pipes from his grandfather and father, also learned the snare drum from his uncle Steve Malley. From 1982 to 2001, Joe taught the Governor Livingston High School Pipe Band, started by Duncan McCaskill Sr. in the late 1960s.

Within the piping community, family connections are common, but not to the extent of St. Columcille, which has always been a generational band. Joe, his brothers Michael, Kevin, and Sean (his grandfather’s namesake) are all pipers and drummers; sister Maura was a drummer and Highland dancer, and sisters Patricia and Deirdre were Irish step dancers.

So mighty is the McGonigal Clan that several tunes have been written in their honor, including “Pride of Kearny,” a jig by Bruce Gandy published in his fourth book, Mr. & Mrs. McGonigal, and “Tartan Man & the McGoo,” a hornpipe by Duncan Bell celebrating the lifelong friendship between him and Joe. 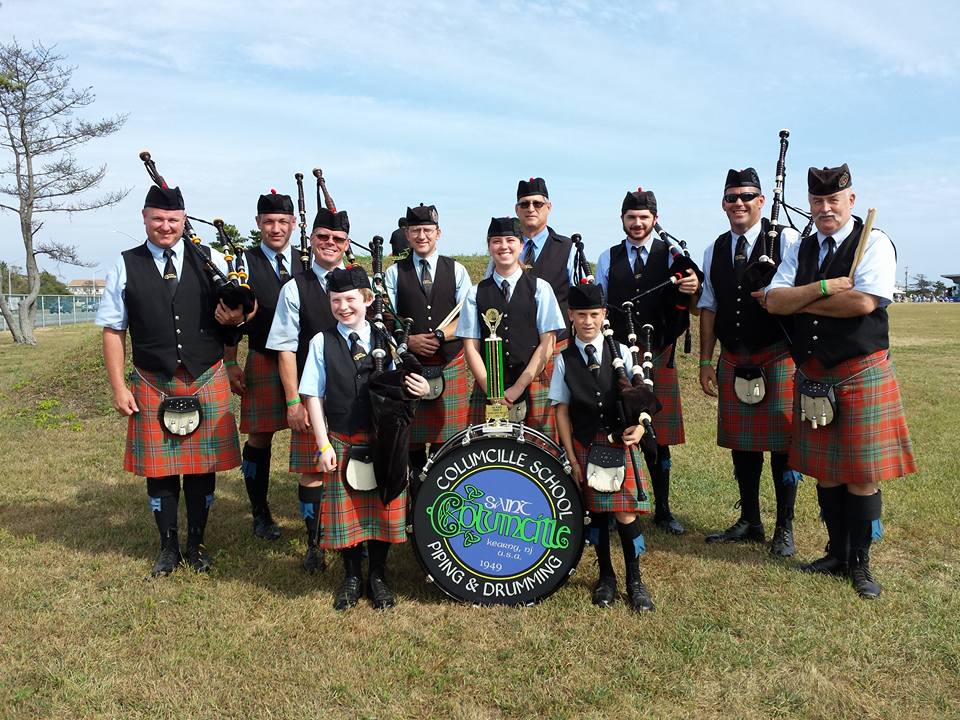 The St. Collumcille School of Piping and Drumming band.

In 2004, Joe and his brother Sean were approached by Donald Lyndsay to play with Oran Mor, one of the top-flight bands in the country. They talked it over with Columcille and made it work – Oran Mor getting the phenomenal skills of Joe and Sean and St. Columcille benefitting from Lyndsay’s weekend workshops. Joe would go back to the world stage an impressive 12 years in a row, playing every world championship in Scotland from 2004 to 2015, first with the Grade 2, then Grade 1 Oran Mor Pipe Band for 10 years, three as pipe sergeant, and then with the Grade 1 Stuart Highlanders of Greater Boston after they merged with Oran Mor for 2014.

Outside of competition, Joe has performed with groups such as the Chieftains, Liam Clancy and Tommy Makem, and the Wolfe Tones. He’s played in concert with Rod Stewart, recorded with Mike Byrne, the Bergen Police Pipe Band, on a 9/11 Tribute CD, and on the NFL’s 75 Seasons: 1920 – 1995 film soundtrack. You’ll also find him in a Bay City Rollers video of “Living Thru the Radio,” from the early 1980s. He is on the Metro Cup committee and is a two-term President and Life-Member of the Eastern United States Pipe Band Association.

Joe continues to teach not only drumming and piping, but also the basics of taking care of the bagpipe and its history in America. He’s spoken at school assemblies, civic groups, conferences, and colleges. He also continues to clear up a common misconception of the bagpipe as “just noise.”

“Most people have a fleeting introduction to pipe music – two minutes of a march at a parade or wedding. They think there’s nothing musical about it.  It takes time to learn not just the notes and embellishments, but how to tune the pipe, take proper care of the reeds, and perfect the clarity of tone.

“When I play an event, it’s my turn to help get rid of these misconceptions. At one time, piping was banned by the English government – you couldn’t wear the kilt, couldn’t speak the Gaelic language and you couldn’t play the pipes – now it’s thriving, all pipes.”

9 Responses to “Forward the Music of the Gael”

Leave a Reply to Sandy