The Argentine Navy Band present for the first time during the program for Buenos Aires Celebrates Ireland. (Photo courtesy The Southern Cross)

How the 100th anniversary of the Easter Rising was commemorated throughout the world.

What Ireland’s Ambassador to Canada Ray Bassett had in mind when he outlined 1916 Easter Rising commemorations in 2016 was sea-to-sea participation.

And that’s what unfolded, scores of examples playing out from Halifax to Vancouver. He said, “the commemoration of 1916 does not belong to any group, individual or even the Irish State. It is part of our common heritage. Therefore here in Canada, I am seeking to promote the widest community participation.”

Bassett noted writer Brendan Behan “is credited often with the observation that the first item on the agenda of any Irish organization is ‘The Split.’ To prove that wrong, I would ask that we have an inclusive, historically accurate and wholehearted commemoration of an event which has shaped our country and provided inspiration for many other countries who wished to regain their independence.”

The embassy launched a year of remembrance with Canada, the Irish Language, and the Easter Uprising 1916: A Commemoratory Conference at the residence of the ambassador of Ireland in Ottawa.

One of the most ambitious programs over the year was by Concordia University’s School of Irish Studies – Reframing 1916: History and Legacies of the Easter Rising. 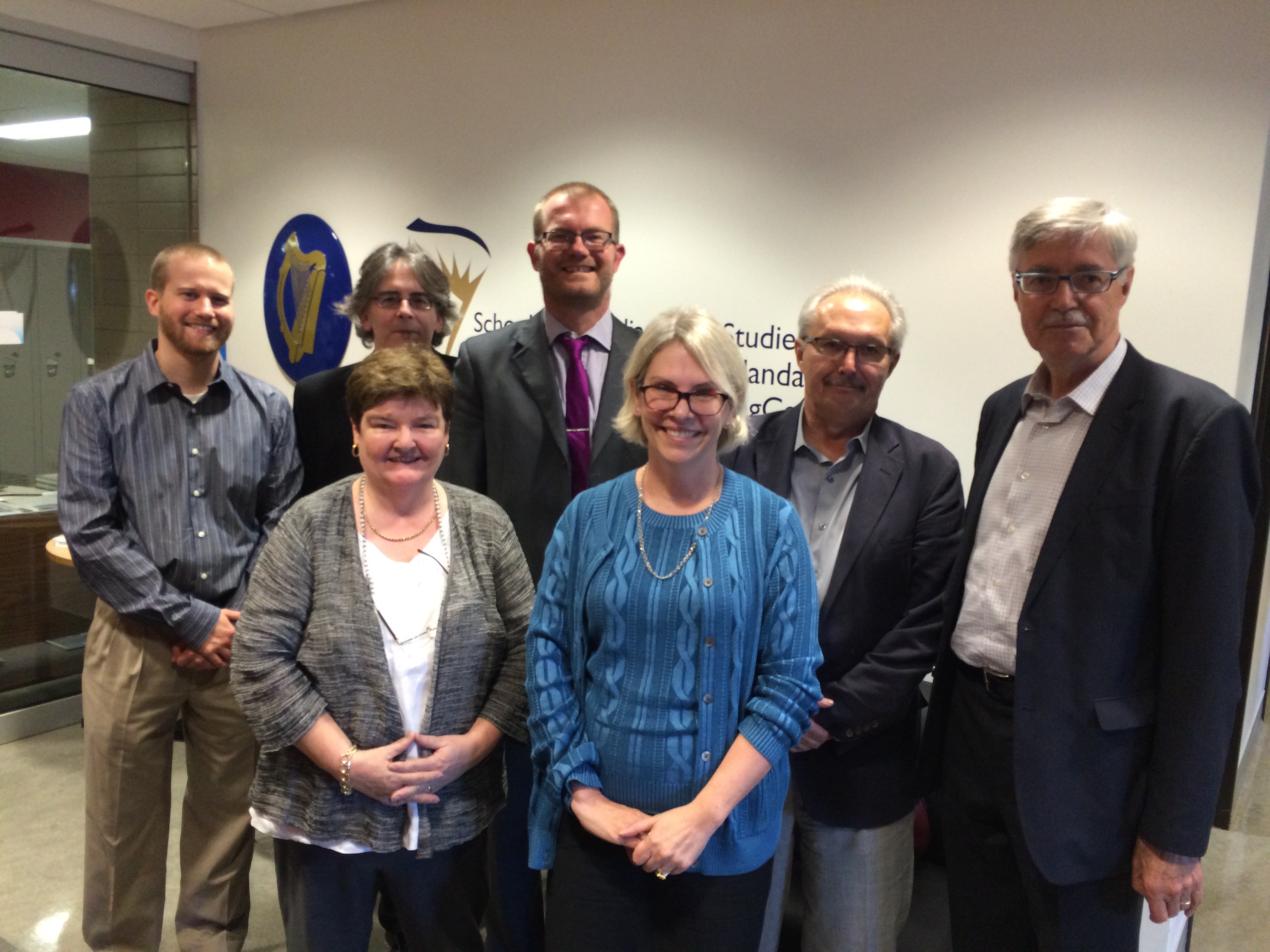 The September 21 event in Montreal, in collaboration with the University of Notre Dame’s Keough-Naughton Institute, offered an in-depth look at one of the key turning points in Irish history. It included a day of public events to mark the 100th anniversary of Ireland’s famed 1916 Easter Rising.

Gavin Foster, an associate professor of modern Irish history at Concordia and the event’s organizer, noted, “Although the rebels suffered initial defeat, they set into motion a revolutionary process that ultimately produced an independent Ireland.”

The main event was a free public showing of the landmark documentary, 1916: The Irish Rebellion, followed by a panel discussion with the film’s writer and producer, Notre Dame professor Bríona Nic Dhiarmada.

“We aimed to present this pivotal historical event to a broad audience in an accessible manner that is both serious and informative, but also highly visual and evocative,” said Nic Dhiarmada.

“The 1916 Irish Rising is not only an event with historical and current ramifications, it is also a story of real men and women who participated in or witnessed epoch-making events. This is a specific story, but one with universal echoes. It is a story of heroism and of cowardice, of mercy and of cruelty, of victory and of defeat.”

A Concordia statement noted, “in a centenary year marked by hundreds of Easter Rising commemorations, conferences, publications and other initiatives in Ireland and throughout the worldwide Irish diaspora, the feature-length film stands out for its rare footage of the uprising, and the large cast of researchers and archivists who were interviewed.”

“It’s fitting that Concordia and Notre Dame, the premier centers of Irish Studies in Canada and in the U.S. respectively, are working together to remember and reconsider the Easter Rising,” Foster observed.

“The goal of Reframing 1916 is to capture the imagination of the wider Concordia community and Montrealers of all backgrounds, while promoting rigorous debate and discussion of this pivotal event’s complex history and legacies.” 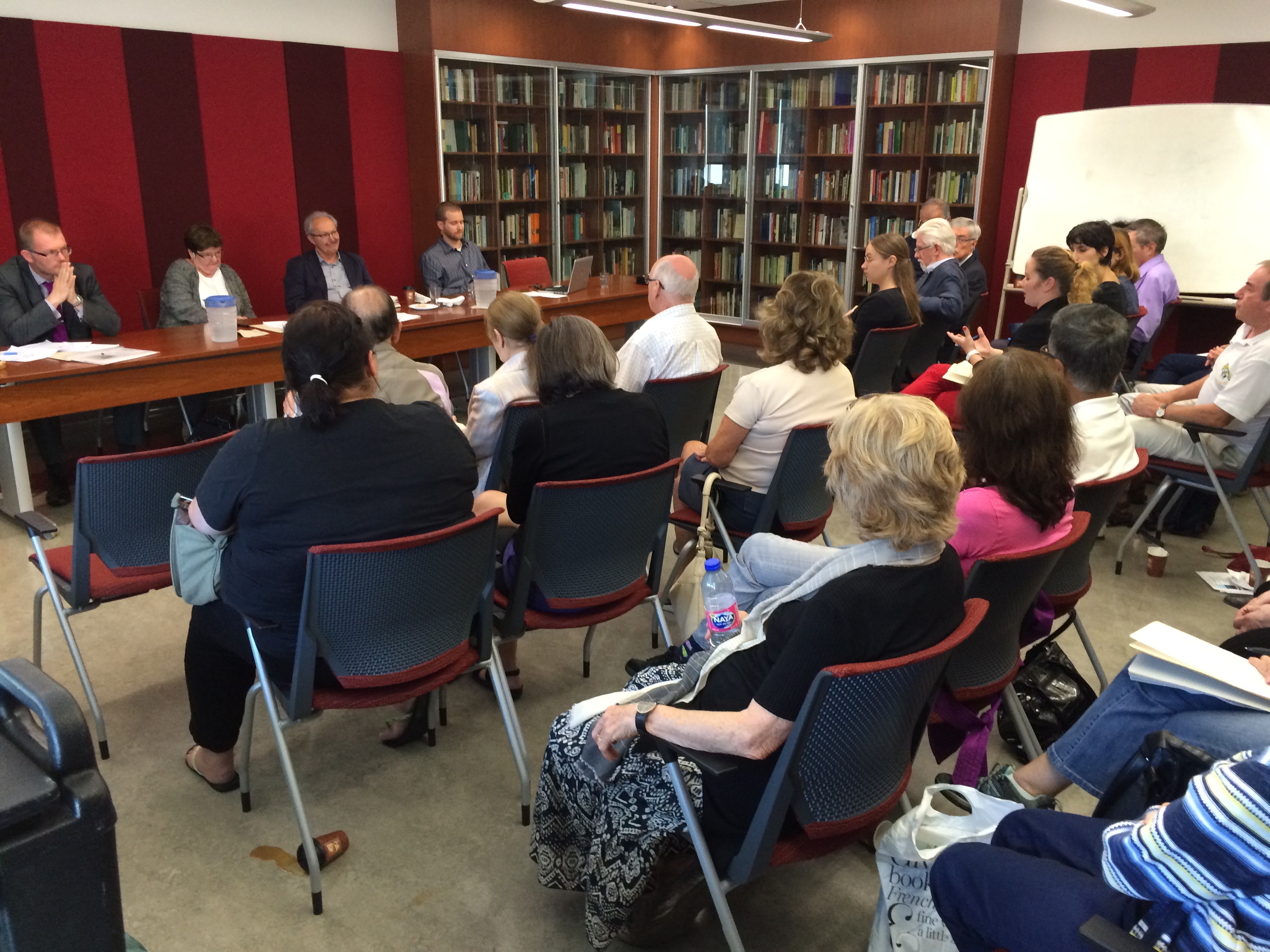 The scene at from the School of Irish Studies at Concordia University in Montreal of the “Reframing 1916: History and Legacies of the Easter Rising” symposium and documentary screening of 1916: The Irish Rebellion.

A sample of the kinds of events across Canada in 2016 included:

May 1 — Commemoration of 1916 hosted by Celtic Folk Night Group – music, songs, poems, readings of the period – in Heart and Crown snug, Ottawa.

May 27 — 1916 Commemoration Concert, Musicians of the World Symphony Orchestra, Montreal. Supported with a grant from the Embassy of Ireland. 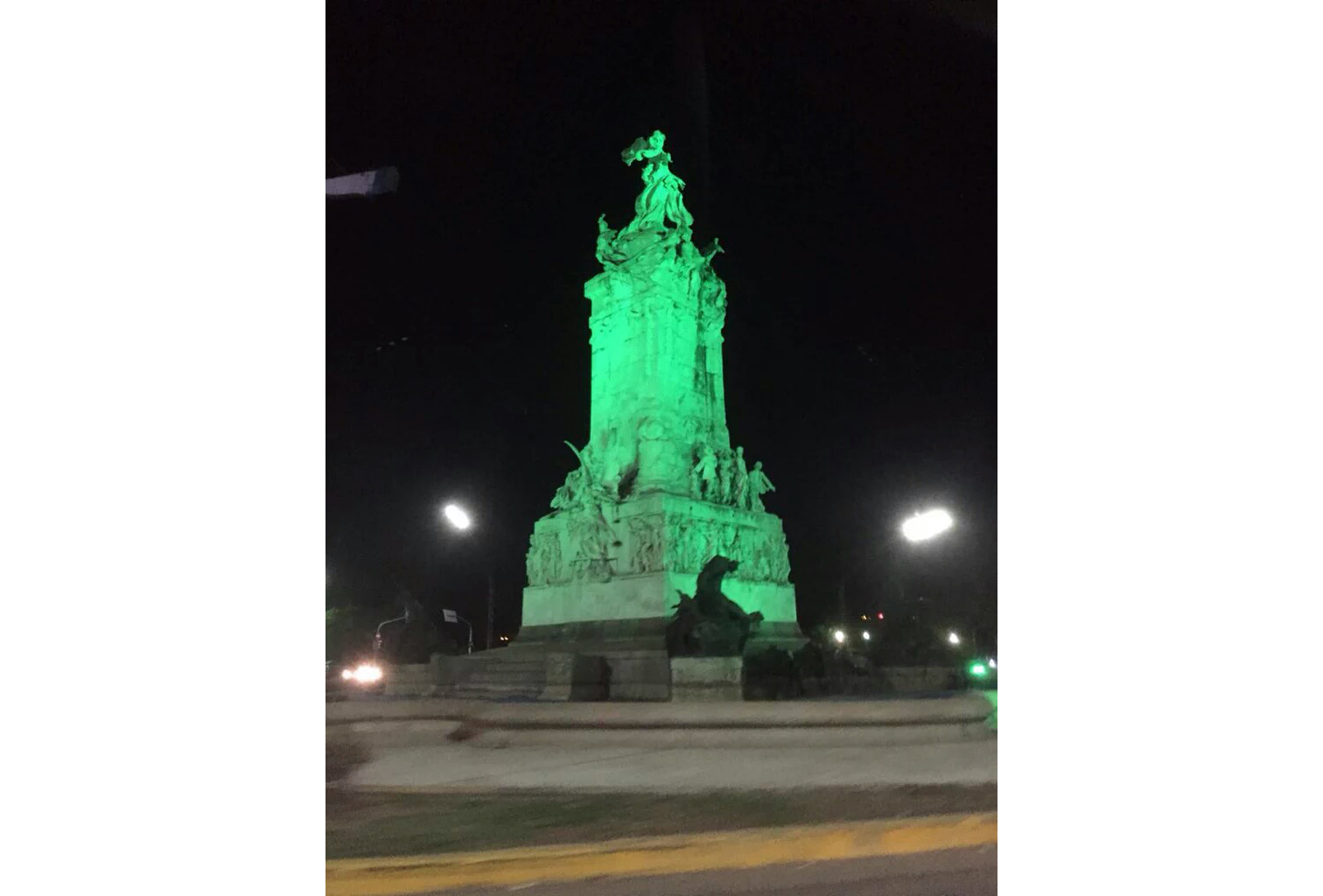 The Spanish Monument in Buenos Aires, raised in 1910 for the centennial of Argentina’s Revolution of May, illuminated green for Ireland’s own centenary.

Irish migration to Argentina in the 19th century led to the creation in the early years of the 20th century of a strong Irish-Argentine community, with its own institutions and newspaper The Southern Cross. The Easter Rising of 1916 evoked significant interest among the Irish community both in Buenos Aires and in other parts of the country where the Irish had settled.

William Bulfin, the editor and proprietor from the mid-1890s of The Southern Cross kept his readers well informed about major cultural and political developments in Ireland. His son, Eamon, who was born in Buenos Aires in 1892, played a significant role in the Rising, hoisting the flag of the Republic on the roof of the GPO. Eamon Bulfin was later condemned to death, a sentence that was commuted owing to his birth in Argentina.

Following the election of the first Dáil in December 1918, it was decided in Dublin to establish a diplomatic mission in Buenos Aires and Bulfin was sent as the first Envoy.

For the Irish-Argentine community in Buenos Aires and the surrounding pampas, March and April of 2016 were filled with events celebrating Ireland’s ties to Argentina, with the main event titled, simply, “Buenos Aires Celebra Ireland,” Buenos Aires Celebrates Ireland. Among the notable events, the Argentinean Navy Band marched in the St. Patrick’s Day Parade for the first time (The Argentine Navy was founded by Mayo-born William Brown), and the Hurling Club of Buenos Aires put on a day of activities and an evening concert. 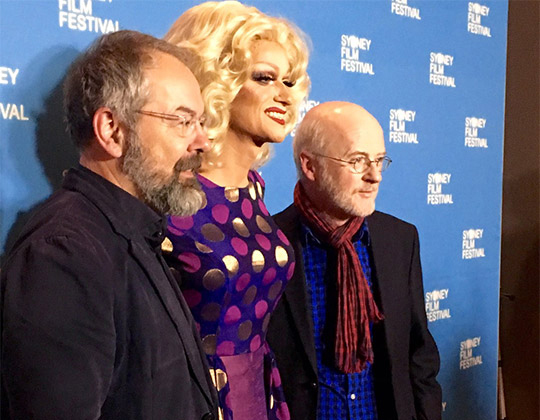 On June 16, the Consul General hosted a reception at the Sydney Film Festival to mark the “Focus on Ireland – From Rebels to New Romantics” short film season at the Festival. The season was supported by Culture Ireland and Tourism Ireland and curated by Gráinne Humphreys, director of the Dublin International Film Festival. The season included Sing Street, The Queen of Ireland, Viva, Atlantic, and Michael Collins.

One other notable in Australia was “Women, Dreamers, and Ireland’s Rising,” organized by the Irish Consulate in Sydney and the Irish National Association of Australasia. The event celebrated the poets, playwrights, musicians and dreamers – many of them women – who paved the way for an Irish Republic by inspiring, taking part in or responding to the 1916 armed insurrection against British rule in Ireland.

Elsewhere on the continent, cities commemorated the Rising throughout the year with concerts, lectures, and dedications to the history of the Irish in Australia.

MELBOURNE: Breandán Ó Caollaí, Irish Ambassador to Australia, and his wife Carmel, visited the Celtic Club in Melbourne in October at an event commemorating the Easter Rising. The Celtic Club is the oldest Irish club in Australia. 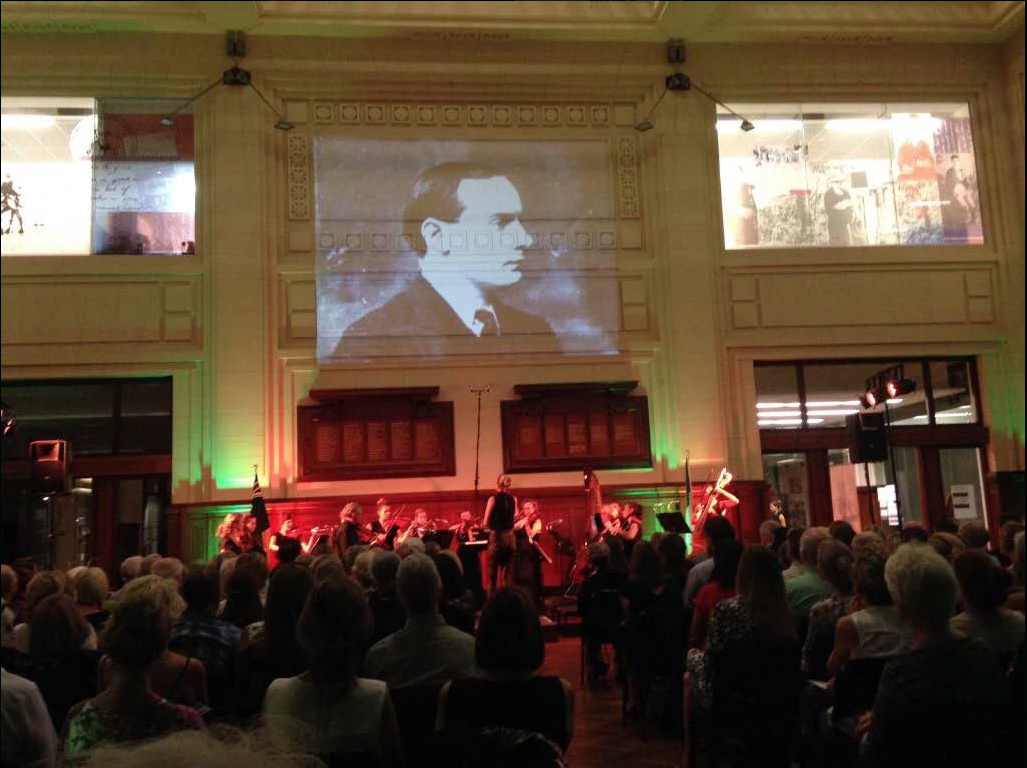 PERTH: On Easter Week, 2016, the Perth Chamber Orchestra, led by Paul Wright, commemorated the Centenary of the Easter Rising with a Centenary concert at the GPO Building in Perth. The concert combined traditional Irish music with classical numbers to tell the story of the Rising. 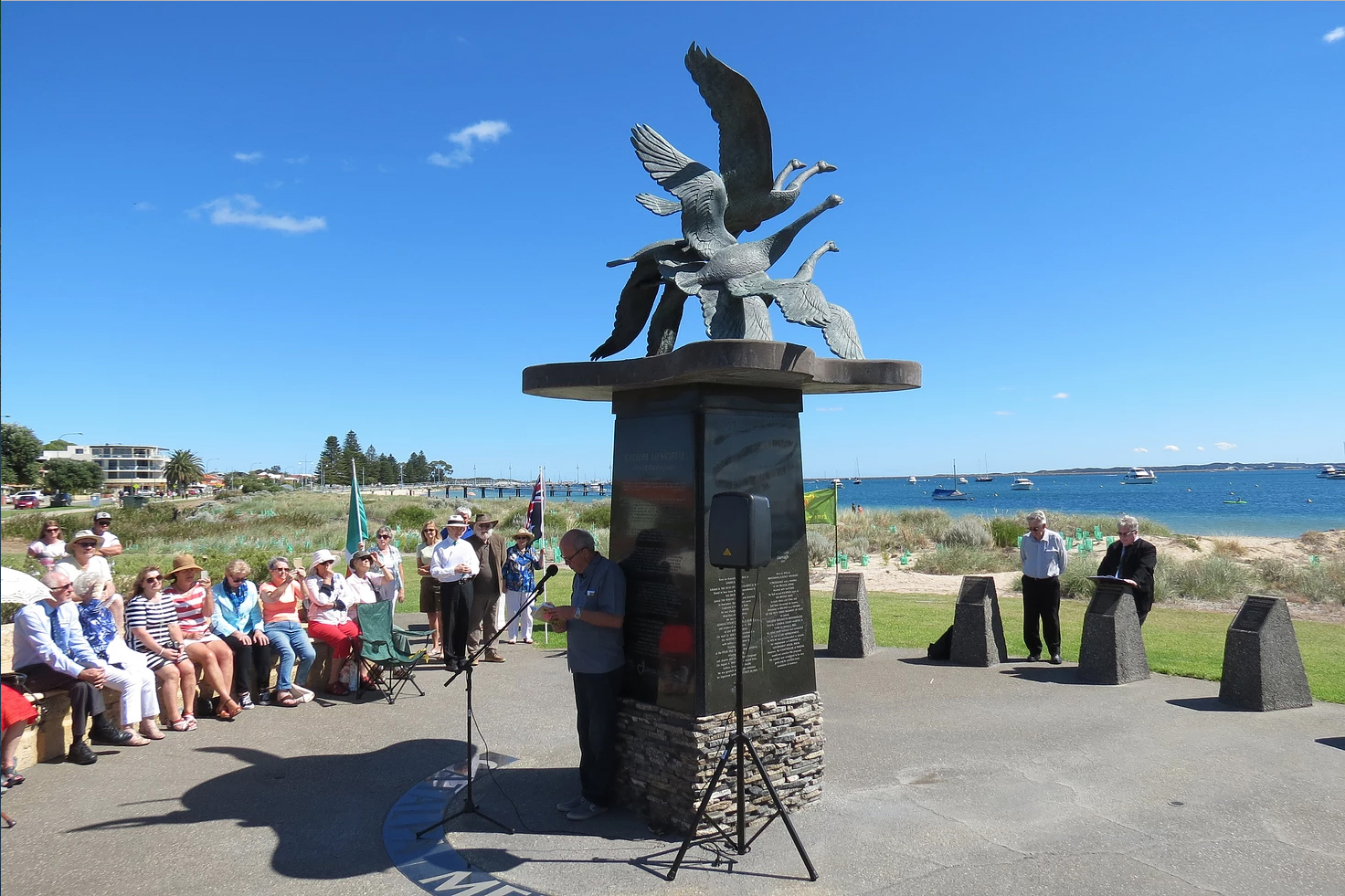 ROCKINGHAM BEACH: In March, Australian Irish Heritage Association commemorated the Catalpa rescue in a ceremony at Rockingham Beach’s Catalpa Memorial, outside of Perth. The Catalpa was a ship bought by Clan na Gael and John Devoy in New York that helped six Irish Fenian prisoners escape from imprisonment in Western Australia in 1876. 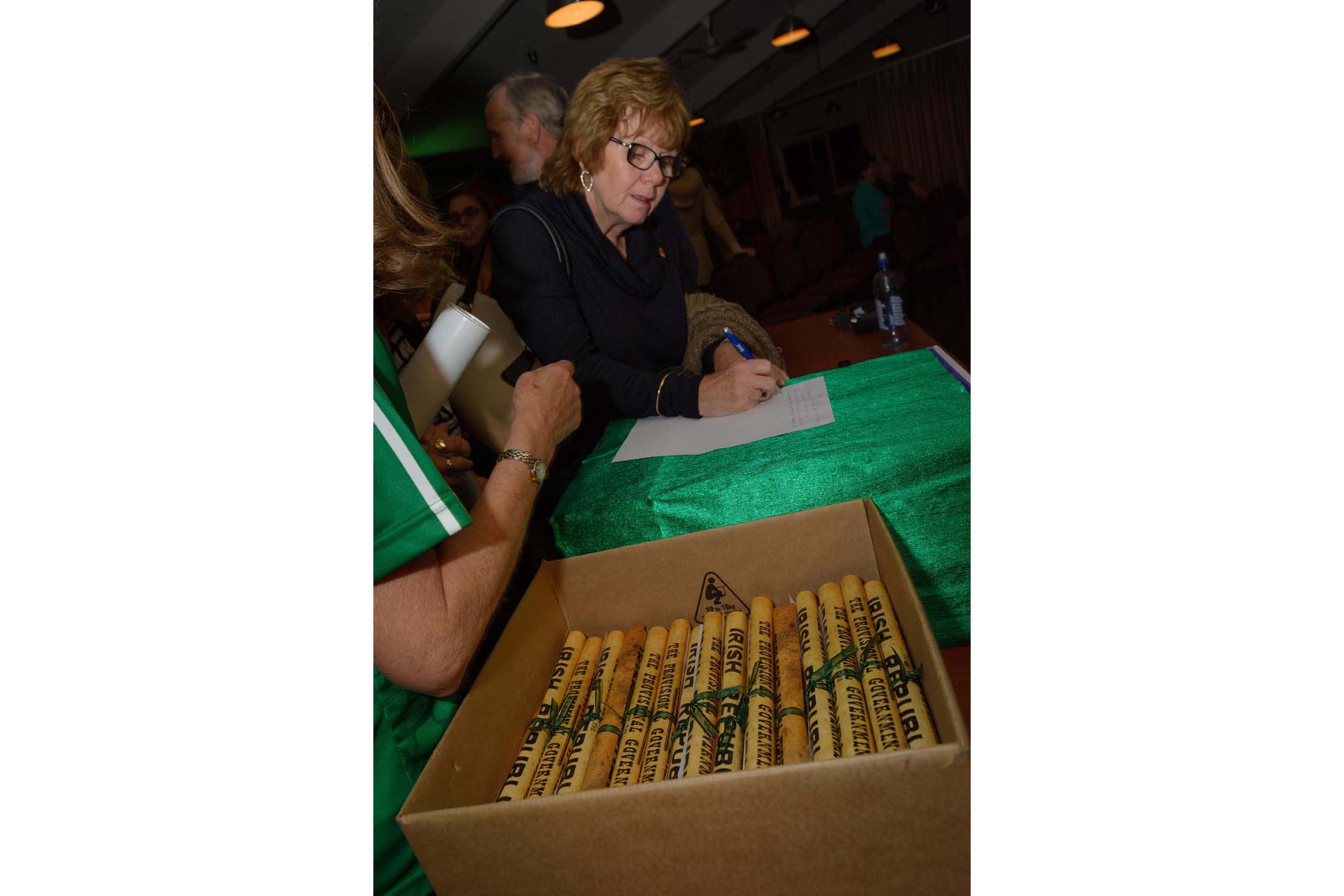 Several cities across New Zealand held Easter Rising centenary events, including Wellington, Auckland, and Dunedin, where an academic conference, “‘Yet No Clear Fact To Be Discerned’: New Zealand’s Response to the Rising,” saw scholars from the University of Otago, New Zealand’s Centre of Irish and Scottish Studies, and the Toitu Settlers Museum come to share the untold story of New Zealand’s involvement in the Rising.

In Wellington, New Zealand’s capital, the Wellington Irish Society, which traces its history back to 1939, hosted a special exhibition on the Rising.

And in New Zealand’s largest city, Auckland, the month of April was dedicated to the centenary. The Auckland Irish Society hosted lectures, musical evenings, a “Great Debate on the Easter Rising,” at the Auckland Irish Club, and a capstone event on April 24, the day of the Rising, during which copies of the Proclamation were given out to all attendees (pictured above).

“We had such a good response to our Commemorative Events that we are organizing more events to look at other important Irish historical events [this year],” Bridie Murphy of the Auckland Irish Society told Irish America. “There seems to be a renewed interest in our history these days.” 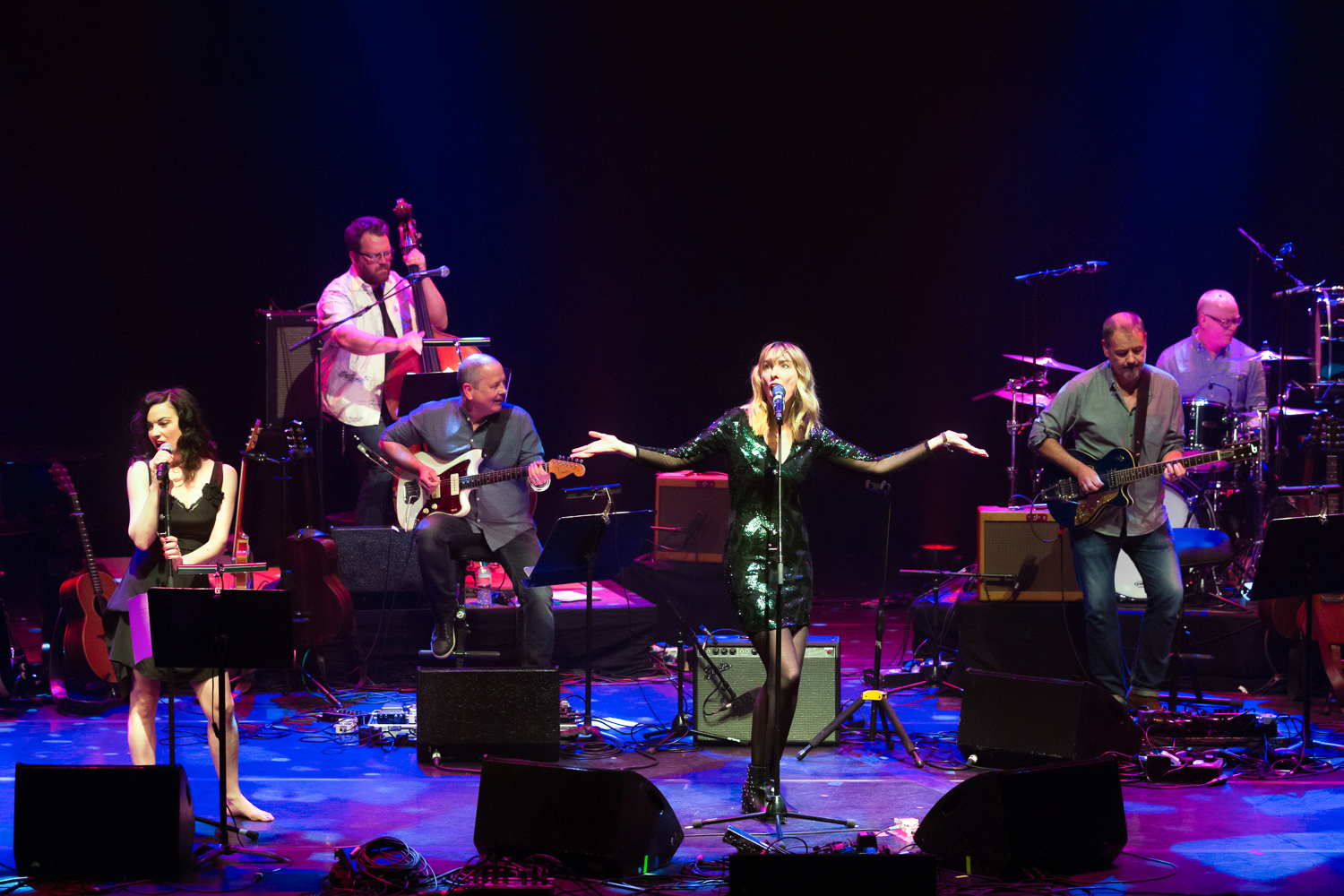 (Photo: Emile Holba)
London’s “Imaging Ireland” concert took place April 29 at the Royal Festival Hall. Produced by the National Concert Hall in Dublin in association with Serious Music in London, the concert was London’s response to the “Imagining Home” concert series at the Dublin’s National Concert Hall, a musical conversation between Ireland and England through the music of the past 100 years. Among those in attendance at the sold out show were Irish President Michael D. Higgins and his wife, Sabina. 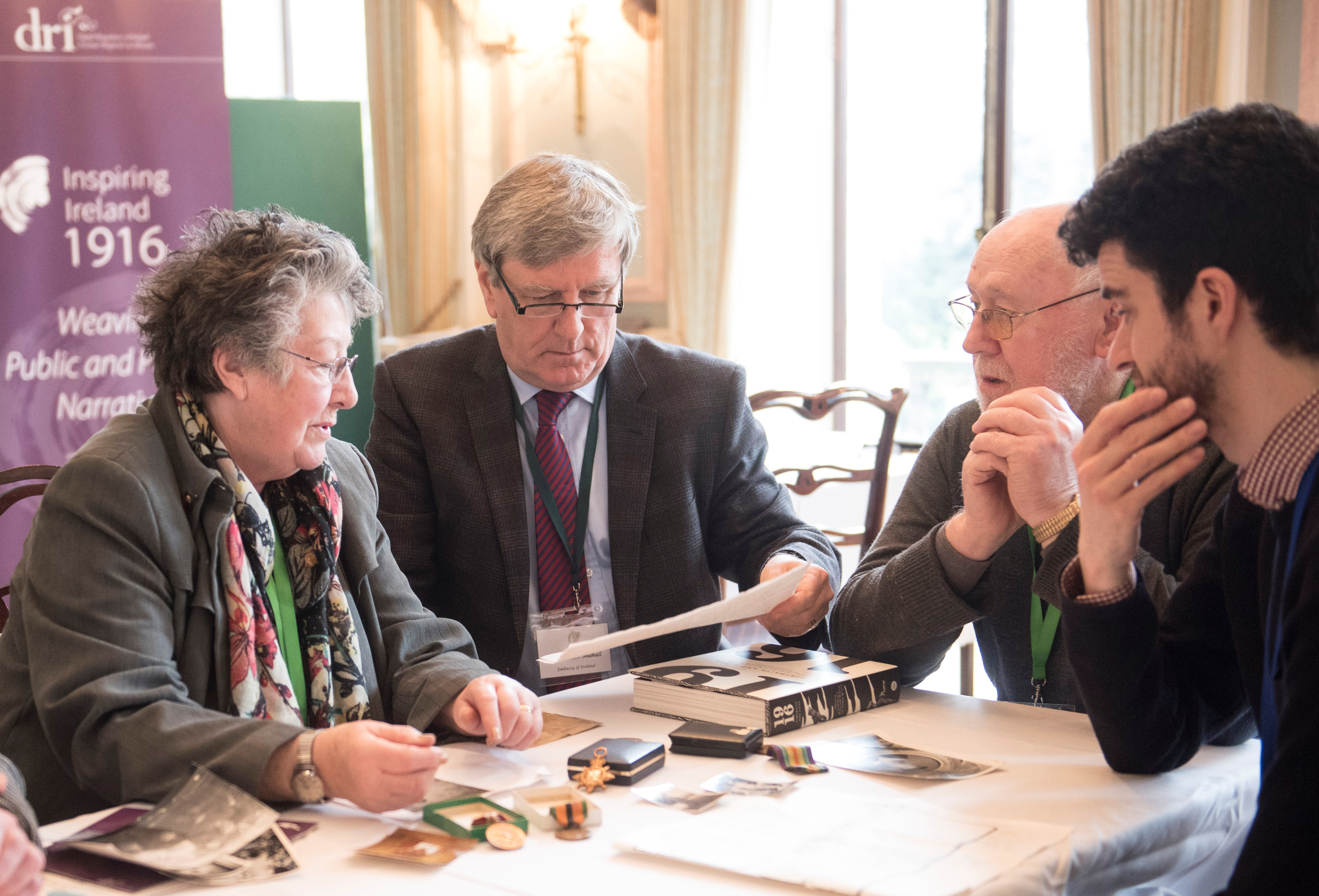 The Embassy of Ireland in London hosted an “Inspiring Ireland” 1916 Collection Day which was attended by over 200 people. In total, 17 contributors came from across the U.K., and the event collected and digitized over 40 unique objects for sharing in upcoming exhibitions, including medals, political pamphlets, photos and even a Celtic kilt pin worn by a member of a pipe band. ♦