“Let us revive the best of the promise of 1916, so that those coming generations might experience freedom in the full sense of the term – freedom from poverty, freedom from violence and insecurity, and freedom from fear.”

On Easter Sunday, March 27, 2016, nearly 4,000 members of the Irish Defense Forces, emergency service workers, and veterans (including those who had served in Ireland’s U.N. peacekeeping missions) paraded in full uniform ahead of military transport vehicles, armored personnel carriers, and mobile artillery pieces in the largest parade ever held in Dublin to commemorate the centenary of Ireland’s Easter Rising.

For a rebellion that left an estimated 485 people dead (more than half of whom were civilians), the Irish government’s commemoration of its events sought to highlight the bridges built in the century since, particularly focusing on the success of the Northern Irish peace process.

Speaking at the GPO, Taoiseach Enda Kenny directly offered a trans-national hand, saying it was “important that we bear witness this centenary year to all those who gave their lives during Easter 1916,” referencing not only Irish rebels, but the Irish and British soldiers who fought against them, many of whom were on leave from the war.

Before the reading of the Proclamation by Captain Peter Kelleher, Fr. Séamus Madigan, Defense Forces head chaplain, offered a prayer of remembrance for “all those who have suffered in the Troubles of the past century, and we hope for peace and reconciliation in the century that stretches before us.”

“Together, on this island, we have achieved a new peace. We cherish that peace, as we cherish all of the children of this island equally,” he said.

President Michael D. Higgins laid a wreath a the GPO with relatives of Rising combatants, and observed a moment of silence during which, the Guardian reported, the “only noise was the creaking of the flagpole in the wind atop the spot generations of Irish citizens regard as sacred, and the flapping wings of a pigeon flying from the GPO to the other side of O’Connell Street.”

Gardaí estimates put those in attendance along the parade’s 2.8-mile route at 250,000, with more than a million people tuning in to the live RTÉ broadcast of the day’s events. Other events during Easter Weekend included laying wreaths at Glasnevin Cemetery, Kilmainham Gaol, and each of the seven Rising battle sites in Dublin, in addition to more than 500 debates, talks, exhibitions, film screenings, and dramatic reenactments on Easter Monday. 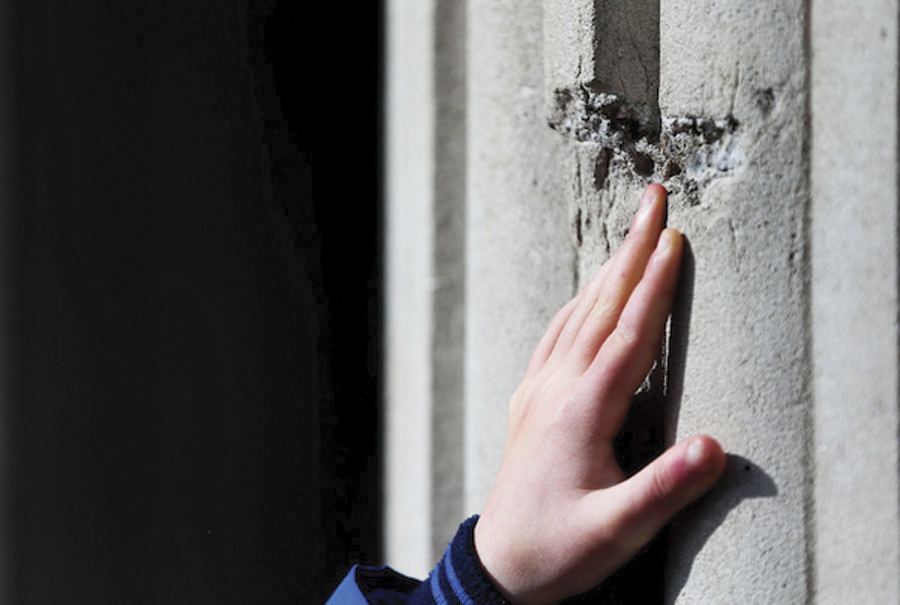 Eamon Heffernan (8) from Limerick touches a bullet hole in the GPO. 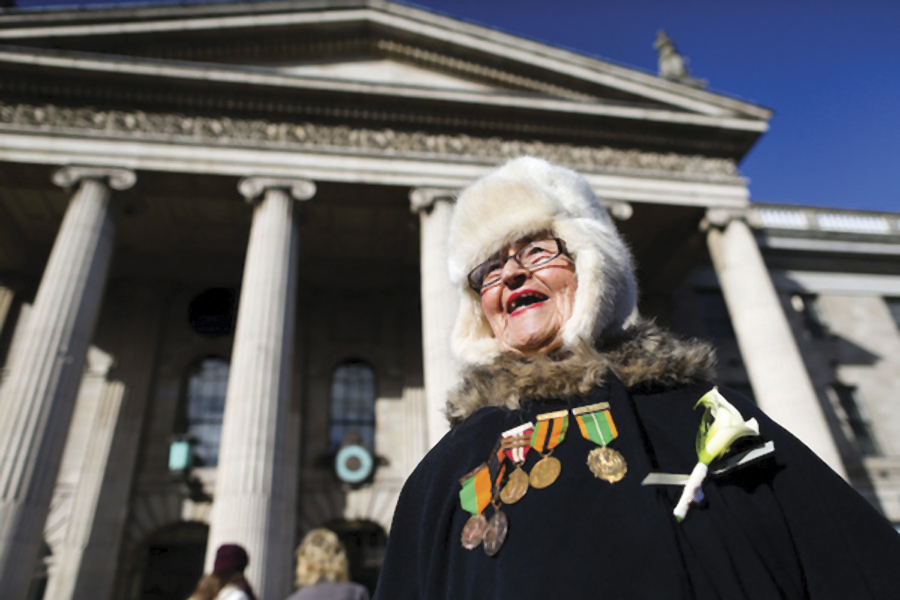 Ms. Moira Schlindwein (nee Reid), whose father fought in 1916 in the GPO, pictured awaiting the parade at the GPO, O’Connell Street. 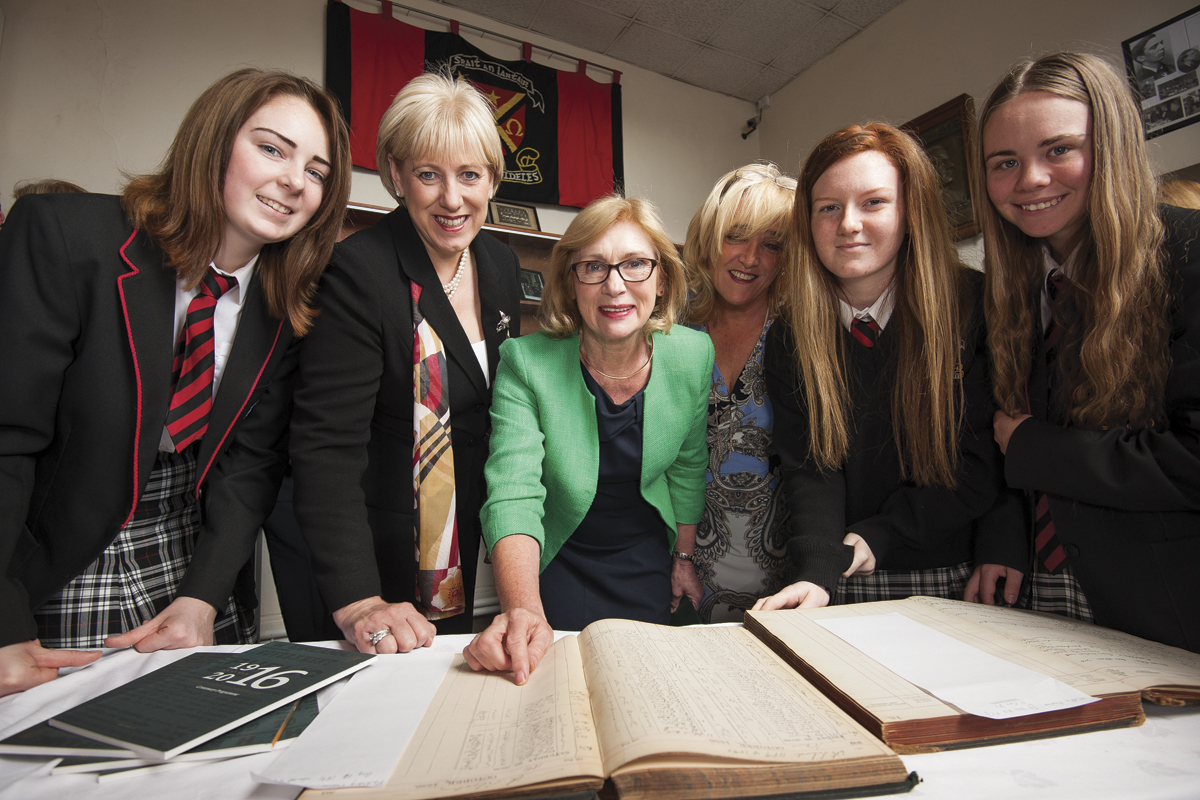 Irish Great War Society, as they acted out some scenes from the rising in Smithfield, Easter Monday. 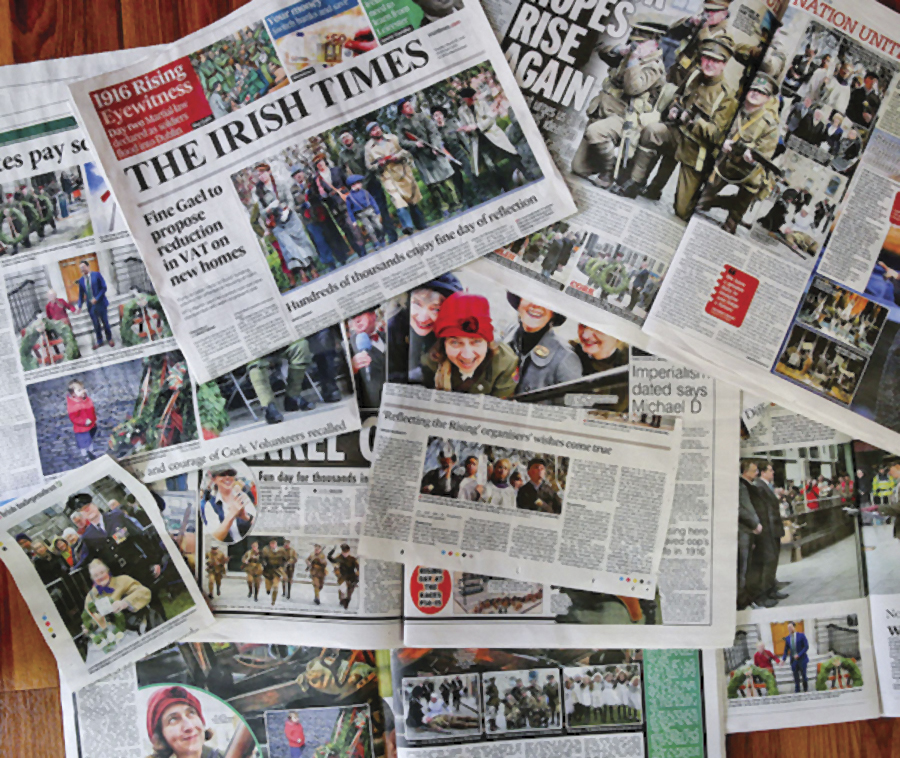 A sampling of coverage from Ireland’s newspapers. 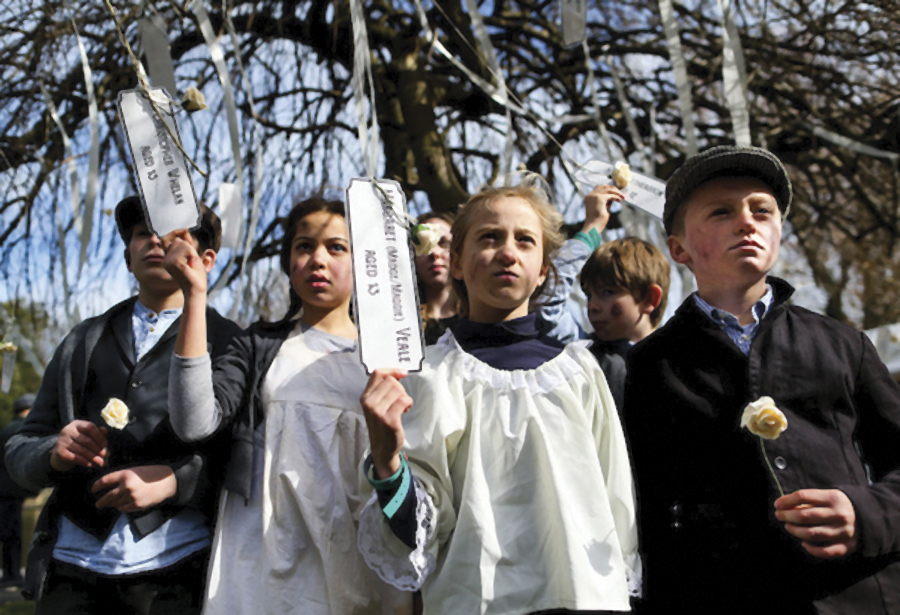 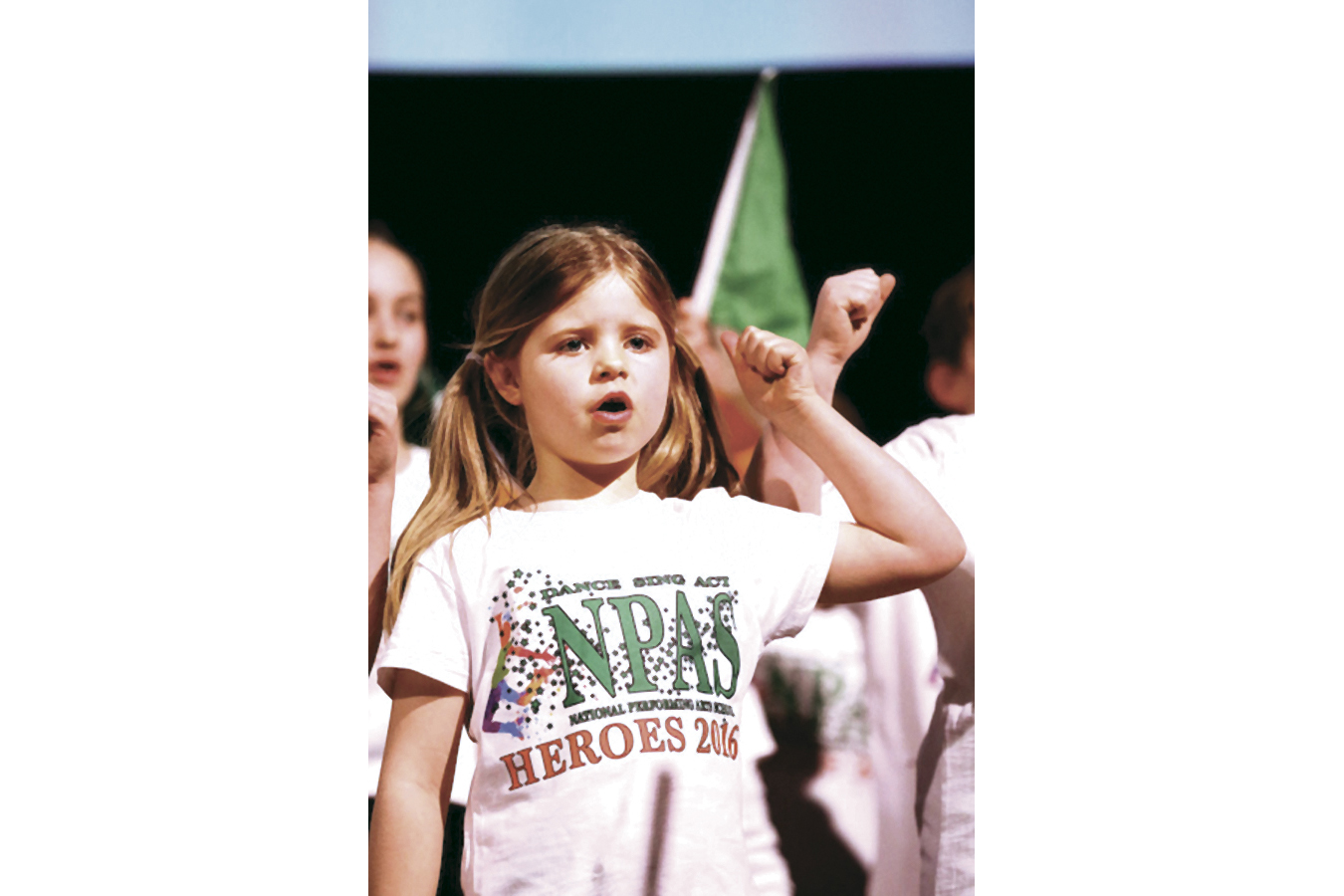 Lily Ann Forbes (6) from Sandymount, Co. Dublin, from the National Performing Arts School, as part of the Reflecting the Rising event performed a short piece entitled We Could be Heroes in the Mansion House, Easter Monday. 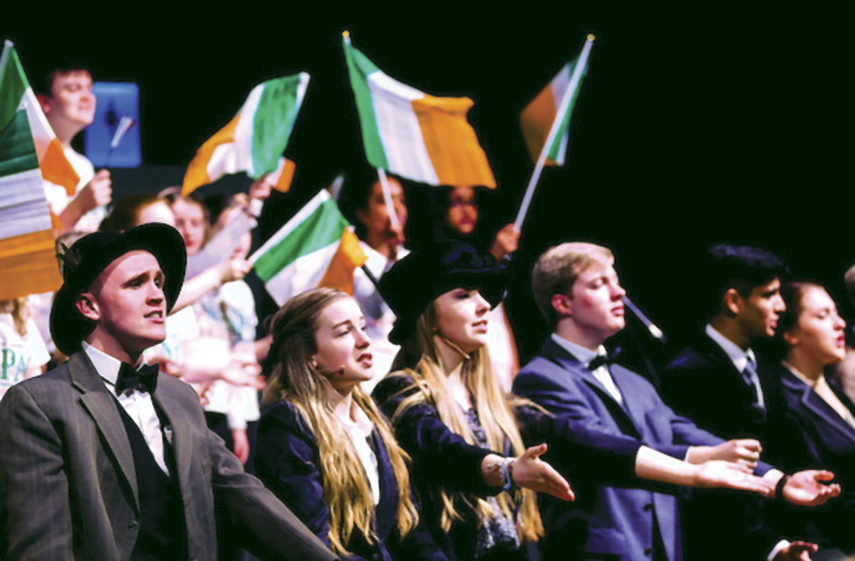 A scene from the National Performing Arts School’s performance of We Could Be Heroes in the Mansion House, Easter Monday. 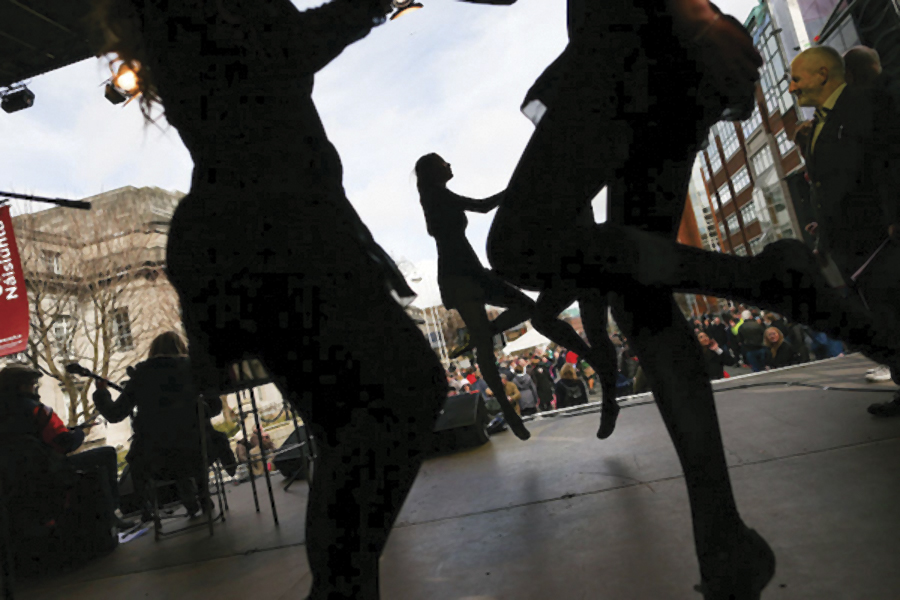 Dancing scenes at the Ceili Mór on Earlsfort Terrace as part of Reflecting the Rising celebrations on Easter Monday. 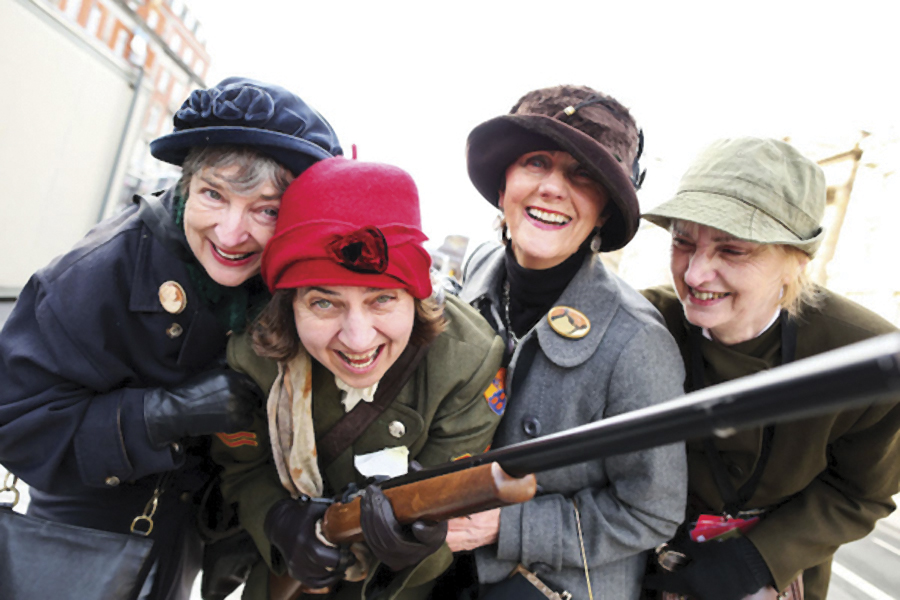 Columba Tierney Graigue from Kilkenny (holding gun) with her comrades at Reflecting the Rising (in partnership with Ireland 2016) at O’Connell Street, Dublin. It was the biggest public history and cultural event ever staged in Ireland and is a free family event. 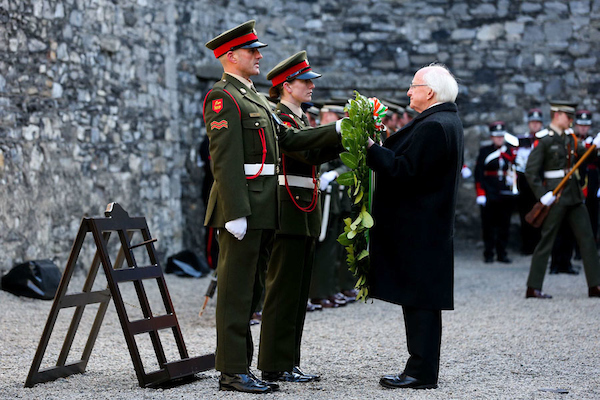 President Michael D. Higgins laying a wreath at the Easter Sunday wreath-laying ceremony in Kilmainham Jail. The ceremony took place in the stonebreakers yard on the site where the 1916 leaders were executed. 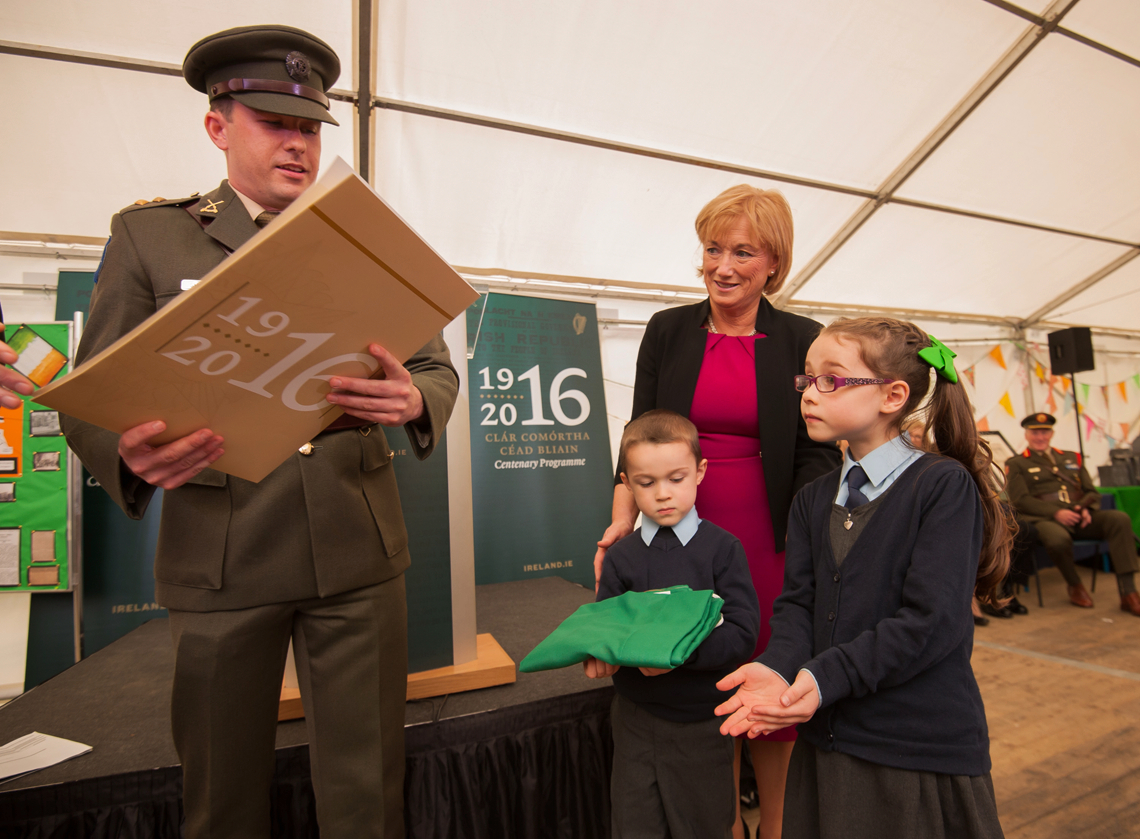 Lt. Shannon presents a copy of the Irish declaration of independence and an Irish flag to Conor and Kyla McDonagh in Cornanool National School in Co. Mayo on Monday morning as part of the 2016 Flags For Schools program. Also pictured is school principal Ann O’Hara. ♦