Ireland Remembers 1916:
Beyond the Pale

The main Easter commemorations were in Dublin where most of the action happened on Easter Monday, April 24, 1916, but the Rising left deep scars on those beyond the Pale of Dublin. There were hundreds of commemorations in small towns, and villages, across Ireland, in Donegal, Longford, and Tipperary, and cities such as Cork and Belfast. 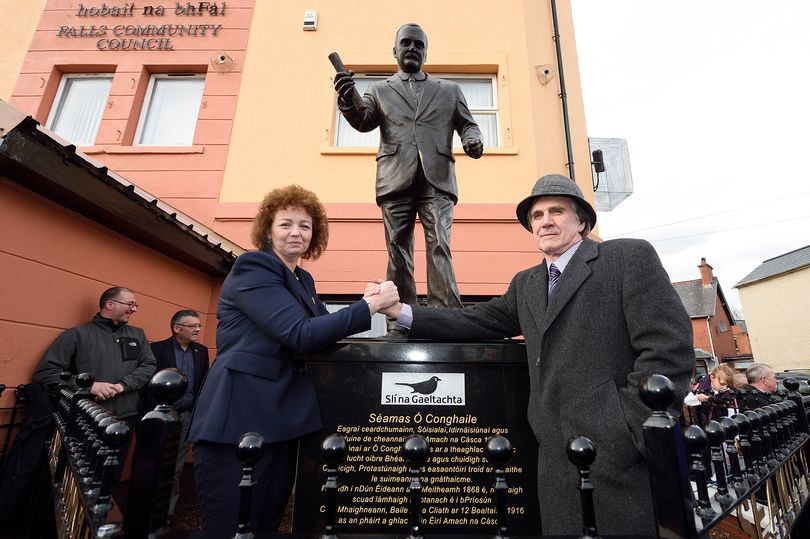 Culture Minister Caral Ni Chuilan pictured with James Connolly Heron, the Great Grandson of James Connolly at the unveiling of a statue to him in west Belfast.

This being the centenary year, the festival committee, with support from the Donegal County Council Community Commemorative Grant Scheme and other funders,  unveiled a special collaborative sculpture entitled Clocha na hÉireann, which was in the making for twelve months.

The collaborative work, a wall map of Ireland, incorporates stone from the 32 counties and the work of stone masons all over Ireland (above). The sculpture is clearly visible, being located in a parking area & viewpoint, and many visitors are specifically making Glencolmcille a destination in order to see it. It will stand the test of time and is a fitting contribution to the legacy of the 1916 commemorations. The unveiling ceremony, which was held on June 18, 2016 in Glencolmcille, County Donegal, drew a crowd of 800 people despite damp conditions. The talk on local volunteer Donnchada MacNiallghuis was at full capacity, recorded for future release.

“As down the glen one Easter morn” – Michael Leane, Conor Leane and neighbor Lori O’Connor of Coolroe, MacGillycuddy’s Reeks. The Leane brothers have connections to the 1916 Rising on both maternal and paternal sides of the family. Their great-great-grandparents were Pat and Mary Plunkett from 16 Moore Street in Dublin City. It was in their house, the final headquarters of the 1916 Easter Rising, that the surrender note was written on the back of the Plunkett’s wedding photograph. Their bed linen was used to wrap a wounded James Connolly before his execution and later handed back to the family by Cumann na mBan. On the other side, their great-great-grandparents and uncles Davy “Garret” Leane, Michael “Mackey” Leane, a bomb engineer based in Waterford, and Patrick “Higgins” Leane, who was first Magistrate in Beaufort, fought bravely in the War of Independence, receiving medals for their actions, which included hiding out for five days in “Die Hards Den” in the Hags Glen. 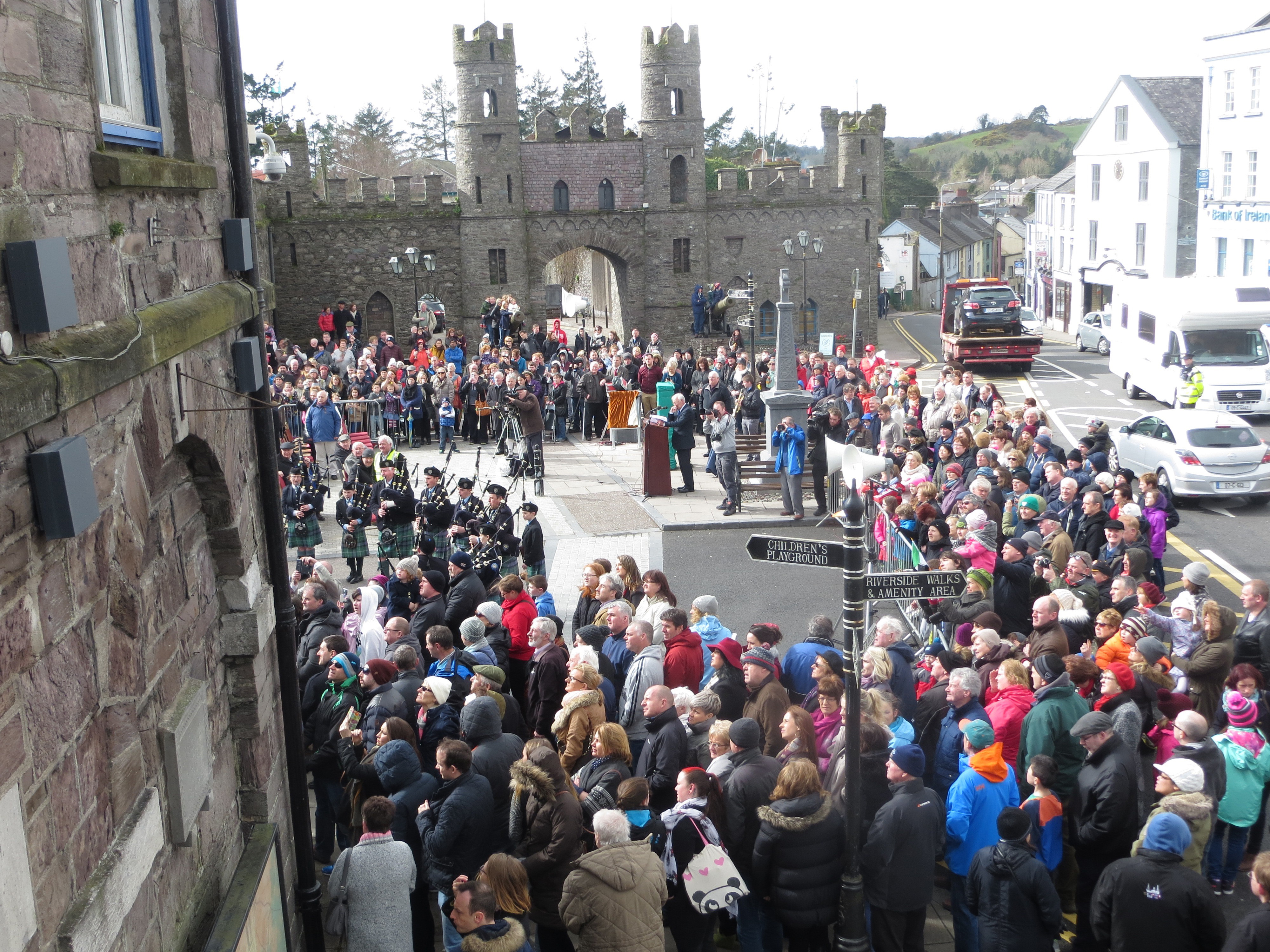 MACROOM: Over 1,000 people paraded together in Macroom, County Cork, to commemorate the centenary of Easter Sunday 1916.

Kiernan’s car with Eamon Creamer. This car once belonged to Larry Kiernan, brother of Kitty Kiernan – the fiancée of Michael Collins, and would have transported Collins around the Granard area on his visits to meet Kitty.

Reading of Proclamation at unveiling of plaque by Durlas Eile Eliogarty Committee at St. Mary’s Garden.

Sinead McCoole talks to students from the  Gaelscoil in  Nenagh about the Mna1916: Women 1916 exhibition in the Nenagh Civic Offices in December.

Jed Walsh and Una de Paor standing with their portraits taken for the “1916 Descendents” project by Damian Drohan.

Reenactors John Goff and Ray Murphy at Enniscorthy, Co. Wexford where the Athenaeum was officially re-opened. The Athenaeum played a highly prominent role during the 1916 Easter Rising in County Wexford, when it was occupied the Irish Volunteers in support of the Dublin Rising.

Irish Defense Forces passing by Enniscorthy Castle, in the shadow of Vinegar Hill, the location of the decisive battle of the Rebellion of 1798.

Marie and Jim Wilkinson, from the Enniscorthy Reenactment Society, during last year’s commemorations in Enniscorthy on Easter Monday, March 28, 2016.

Rosie and Emily Murphy from Enniscorthy.

Enniscorthy reenactors are inspected by John Grey during the commemorative events.

The reading of the Proclamation in Enniscorthy, Easter Monday, 2016. ♦