Cast as Mildred Loving, one half of the real life couple on which the film is based, Negga dazzles opposite screen husband Joel Edgerton in a film that focuses not on dramatic court cases or complex civil rights tussles, but on how discrimination impacts ordinary lives.

What Negga also delivers, unforgettably, is a complex portrait of a long and happy marriage, to which she brings considerably artistry, of a kind that would have been applauded in the golden age of Hollywood.

On screen, Negga’s expressive mastery frequently has reminded some critics of the young Bette Davis, and when I tell her she immediately lights up. “I love her! My favorite film is All About Eve. I’ve basically been channeling her my whole life and seeing if it hits or misses.”

Critics already agree that she hits every mark. 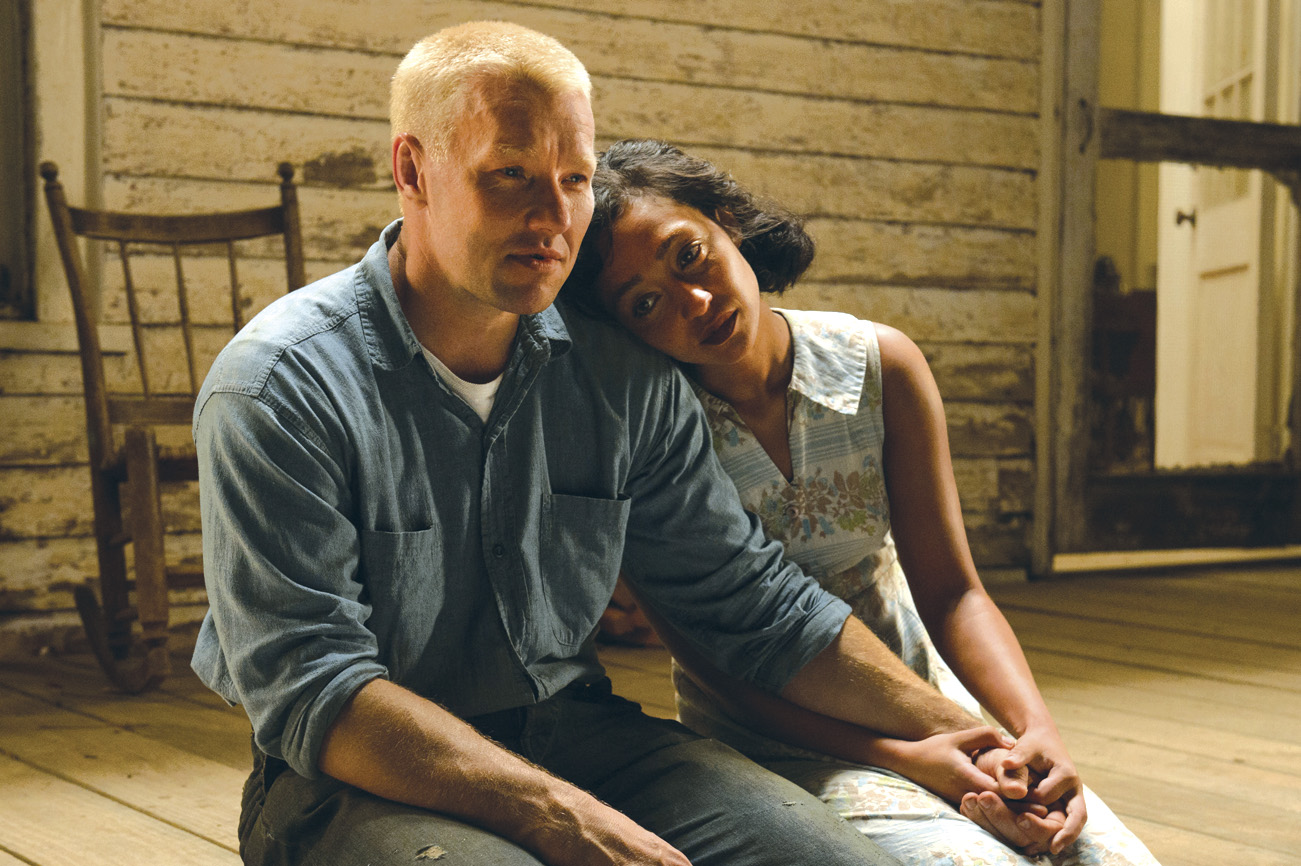 Joel Edgerton and Ruth Negga as Richard and Mildred Loving, an interracial couple who are sent to prison in Virginia in 1958 for getting married.

Already there is Oscar buzz about her slow burn performance, but as she travels the globe promoting the new film she’s finding herself increasingly missing her large family in Ireland and her home in London.

“Funnily enough – and I’m not just saying this because I’m talking to Irish America – it’s one of the parallels with Mildred Loving and myself. There’s a deep homesickness in her. It really helped me understand her character.”

Tell a young person that it was illegal to marry someone of a different race in the southern states of the union until the late 1960’s and they’ll gasp. Discovering that too quickly forgotten nugget was what inspired director Jeff Nichols, 37, to helm Loving and focus on the quietly committed couple whose court challenge ended the interracial marriage ban in the United States.

Nichols was raised in Arkansas, where he attended Little Rock High. His school had been the site of a desegregation crisis in the late ’50’s but he had never heard of Richard and Mildred Loving. That oversight, together with a call from Martin Scorsese suggesting the subject matter, set the rising star director on course to direct the film.

The cruel absurdity of the marriage ban contrasts strongly with the unarguably happy marriage between Negga and Edgerton’s characters and the actresses confesses to me that she used her feelings about Ireland to get a firm grasp of her role. “I would ask myself, ‘God, imagine being told I could never go home to Ireland again?’ I immediately felt this wave of homesickness about it. Mildred and Richard had been repeatedly warned they’d be imprisoned if they ever returned together to Virginia.”

Growing up Ethiopian and Irish in Limerick, her own experience was pretty delightful, she tells me. In fact she didn’t encounter any anti-black sentiment until she moved away to London she says.

“I think that each persons experience in Ireland is quite individual. When I was little I thought that everyone wanted to hold me as a baby because I was this thing of fascination. But rather than this thing that wasn’t quite right, I just felt that my difference was something that was probably very exotic. I didn’t know any black people in Ireland, there were none where I was growing up.”

Seeing anything or anyone out of the ordinary in Limerick in the ’80s was actually an event, she says. “I remember seeing my first punk rocker in Limerick and he just absolutely flabbergasted and amazed me in a brilliant way; I was fascinated.”

But her childhood was pretty idyllic. “I have a very large family and I just felt very loved. And also because my dad had died as well (tragically, he was killed in a car crash when Negga was seven) there was probably an extra sort of defensiveness around me.”

Things changed when the family moved to London, though. “I did feel it quite keenly when I moved to London, because being Irish and black became an issue there for some people, that’s when I first felt that gosh I’m really different.”

“Some people would say to me you don’t sound very Irish. It’s because I have this tendency to iron out my accent. Not because I’m ashamed of it but because it makes my life easier if I don’t keep having to repeat myself.”

Clearly, this is an issue that she thinks about often. “We live in a society that says if you’re this you must be that. I’ve had it all my life. You can’t be Irish. Why can’t I be Irish? Why can’t these two people in this story who love each other be together?”

Does she think the message of Loving is timely in our polarized new era? “There’s fear and there’s divisiveness now that I haven’t felt this strongly in a long time. This real kind of fear of one another. There’s an aggression, an accusatory atmosphere, people are quick to point fingers for whatever bloody reason.

“I really feel that Loving taps into that. It shows us that this isn’t how it has to be. We’re capable of great goodness and great kindness towards one and other. I think that this film shows us we don’t need walls. Walls are what create fear. They beget it. I think our film does highlight that because it’s about this couple that all they want to do is get married. They have different identities but I think that’s great. I think in a modern society that’s something we should aspire to you know?” ♦

℘℘℘ In other adaptation news, Irish actress Ruth Negga has taken a lead role in a highly anticipated film...