Dinner and “The Dead”

Dublin, January 6, 1904. The Feast of the Epiphany. At the townhouse of the elderly Morkan sisters, Kate and Julia, their annual dinner and musicale is in full swing and a dozen guests are in spirited holiday mode, dancing, laughing, singing, reminiscing, and retailing old family stories. Among the revelers: Gabriel Conroy and his wife Gretta who, before the long evening is over, will have epiphanies of their own that will reveal deep emotional undercurrents in their marriage that have long gone unexamined. Thus: the setting for James Joyce’s most celebrated short story, “The Dead,” the masterpiece of Dubliners, his suite of tales about the city that occupied his imagination and his art for all of his life. 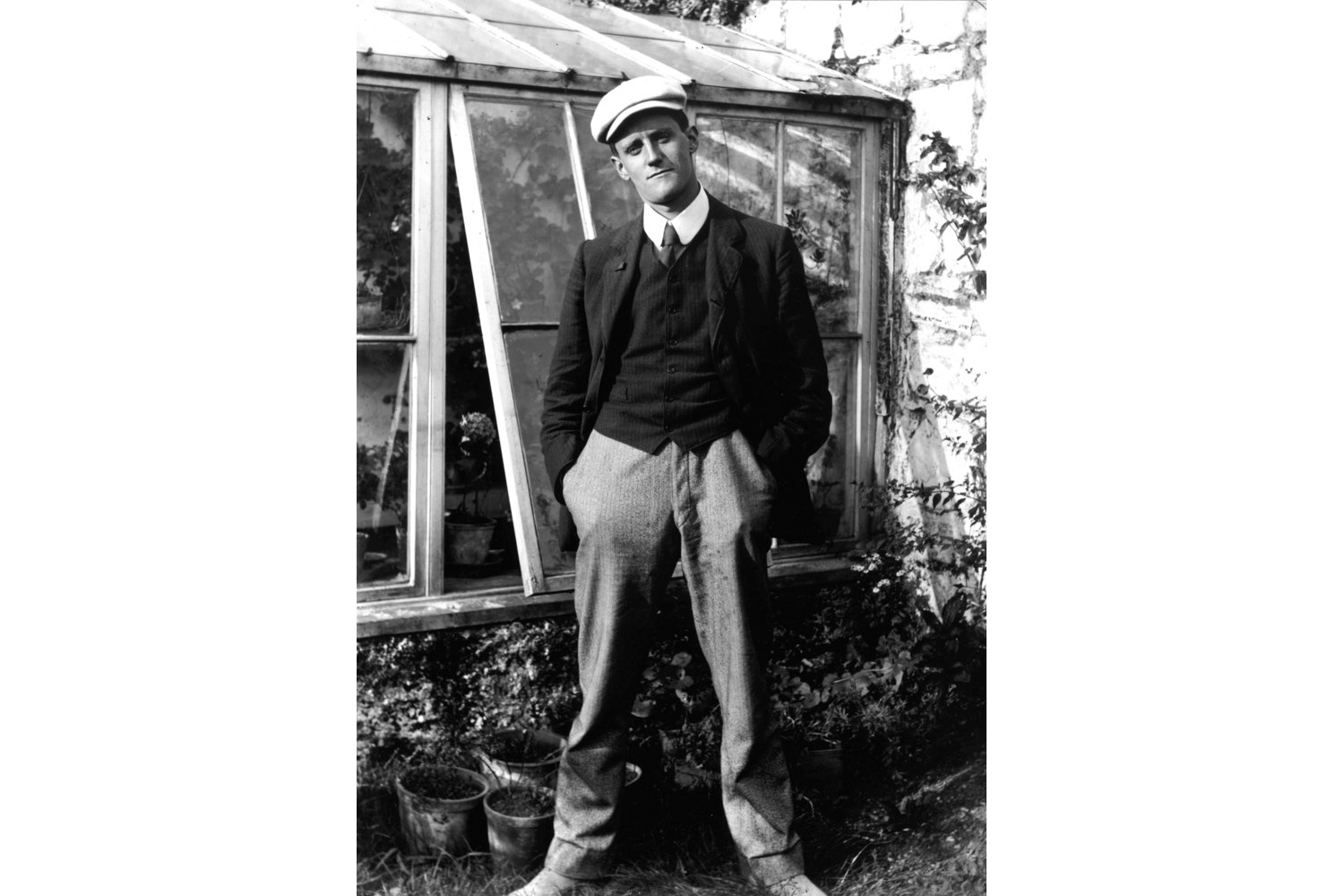 James Joyce in his mid-twenties at the time he wrote the short story, “The Dead.”

An audacious venture in stagecraft brought “The Dead” to the Fifth Avenue mansion of the American Irish Historical Society for a limited run of live performances (November 19 – January 7) in which a few privileged theatergoers – 40 people each night – become, in effect, the guests of the Morkan sisters and are embedded as extras in the action of the play, enjoy the festive dinner, and move with the actors from room to room as the story unfolds. The production is the brainchild of the novelist Jean Hanff Korelitz who, after attending a reading of Dickens’ A Christmas Carol at the American Irish Historical Society, was struck with the notion of creating an “immersive” theater experience in that luxe Victorian townhouse built in 1900, a stone’s throw from the Metropolitan Museum of Art. She raised the idea with her husband, Paul Muldoon, the Armagh-born poet, winner of the 2003 Pulitzer Prize for Poetry, humanities professor at Princeton University, and poetry editor of the New Yorker. They decided to collaborate on a script based on “The Dead” and took the idea to Chris Cahill, executive director the AIHS, who enthusiastically replied that if they developed the project, he’d give it a home. “We’d never done anything like this,” Cahill told me. “It’s a large undertaking, but it fits so well into this space.” 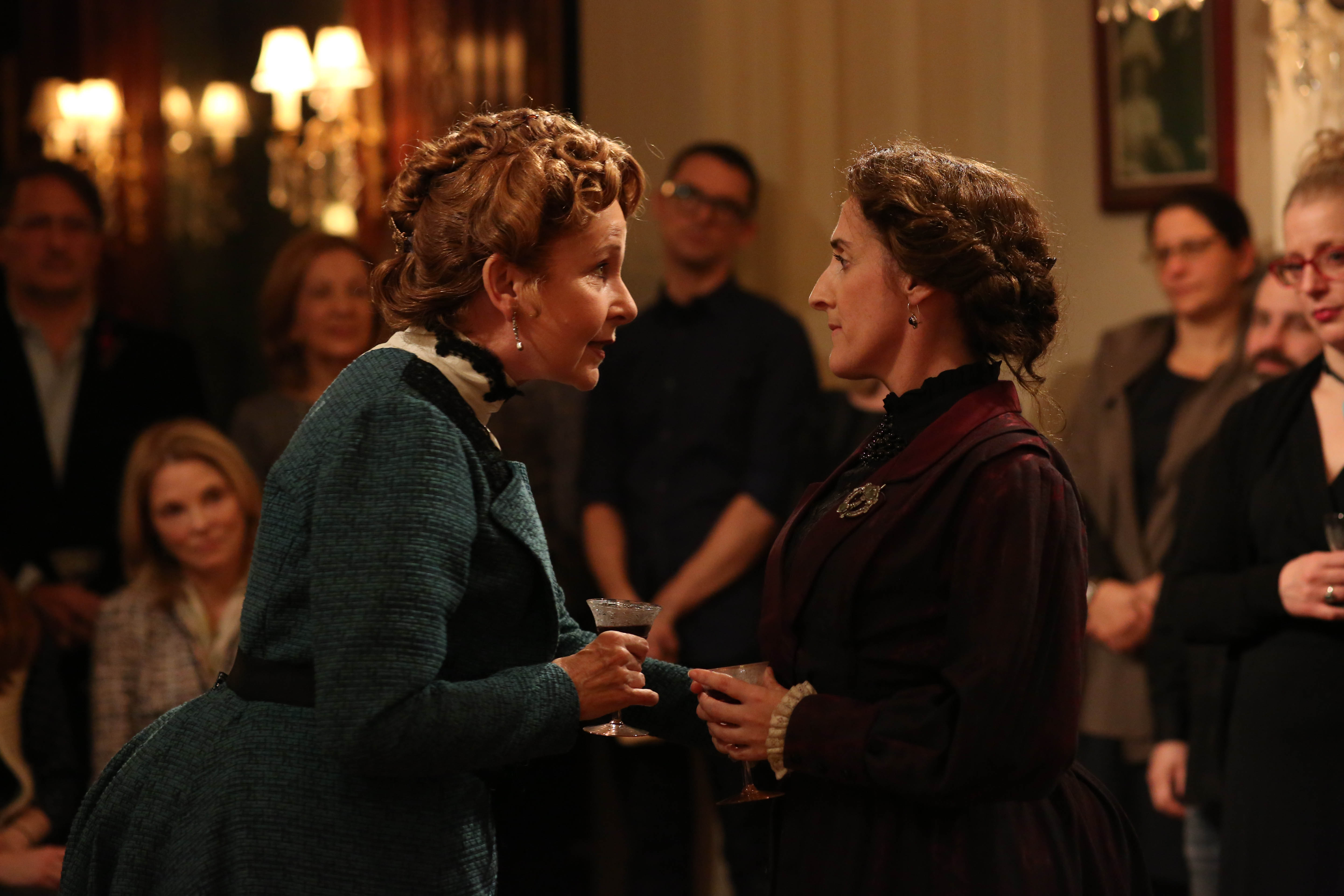 Kate Burton and Aedin Moloney in The Dead.

From there, it was full speed ahead. Jean and her sister, Nina Korelitz Matza, promptly created Dot Dot Productions, and started raising money. But who would actually design the production, cast, stage and direct it? “We started looking for the right partner,” Jean Korelitz told me. “At such a moment, all roads lead not to Rome but to the Irish Repertory Theatre” – and its founders, Ciarán O’Reilly and Charlotte Moore – which has the best track record of any company in the U.S. in bringing powerful, elegantly mounted stage productions of “works by Irish and Irish American masters and contemporary playwrights to American audiences,” in the language of its mission statement. (Brian Friel said of the Rep, “Because the best theater involves an experience of the spirit, the ground they occupy has now been made sacred by them. They have made the space hallowed.”)

I asked Paul Muldoon why he and his wife chose “The Dead” as the work they’d adapt for their ambitious project. “‘The Dead’ is the greatest short story ever written,” he said. “It presents a complete world in a very few deft strokes. There’s so much going on under the surface, behind the fabric.”

Creating an adaptation was “a bit daunting, a dangerous thing to do,” and needed the addition of “new scenes not in the story” to expand a few of the relationships. Joyce obsessives, close readers, and exegetes will decide for themselves if those departures and emendations are sufficiently respectful of Joyce’s holy writ. 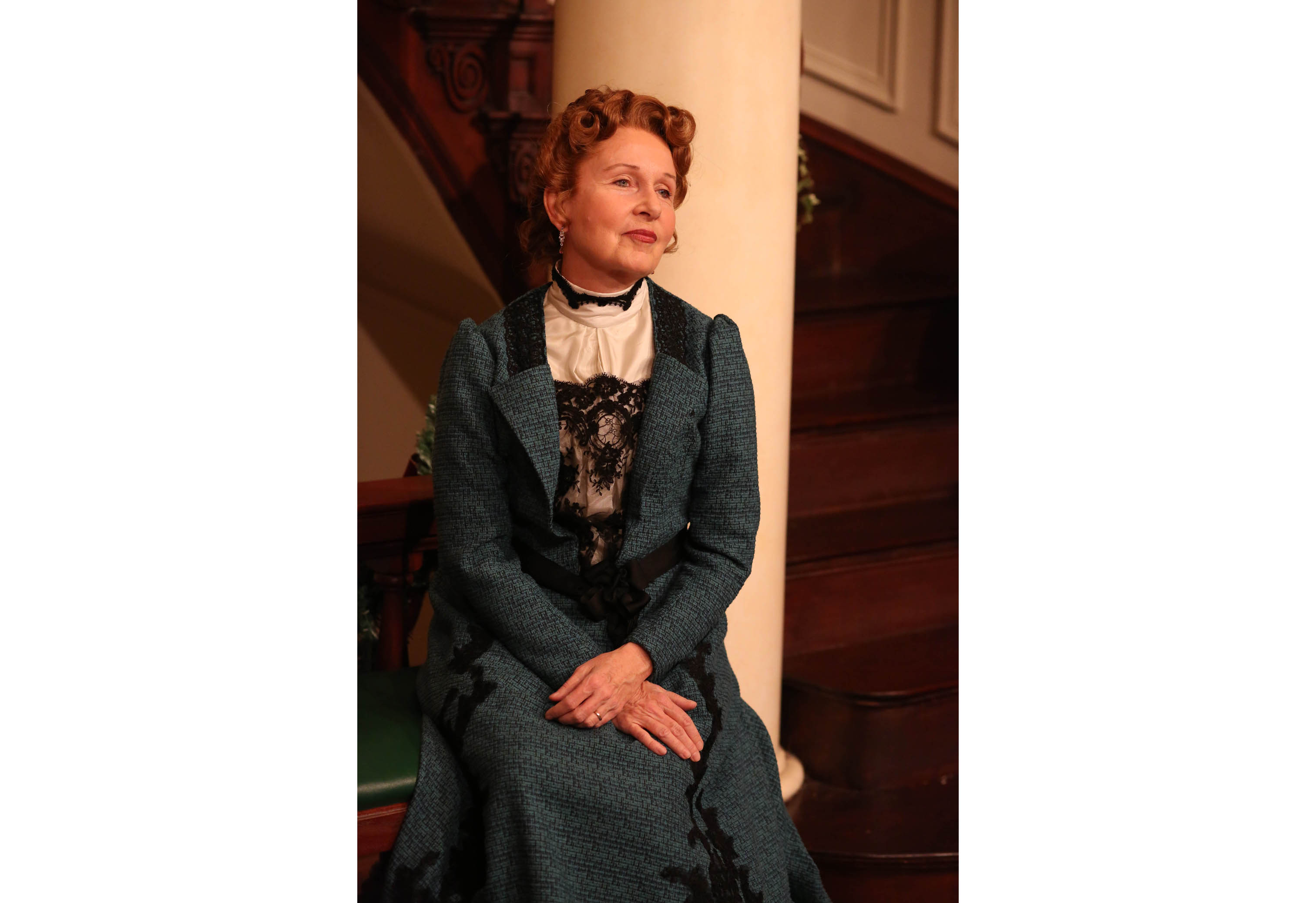 Hardly a soul in 1904 Dublin could afford to attend this new staging of the story. The tickets were pegged at $300 each for the performance and the holiday feast, which approximates the hearty meal described in the original text.

As the director of “The Dead,” the Rep’s O’Reilly loves the venture because, as he told me, “It’ s exactly the kind of thing the Rep would do if we’d thought of it ourselves.” As he spoke, he was roaming the upper room where the famous final scene between Gabriel and Gretta takes place. “The guiding principle is that, from the moment the audience steps inside the building, they should feel it’s 1904, and we’ll accomplish that in every way we can, with music, costumes, lighting, props.” A big challenge, he added, is “focus.” With a large cast and 40 extras moving from place to place, the task of directing the audience’s attention to the actor who is speaking – a simple matter on a proscenium stage – is a lot trickier in the more fluid, free ranging, immersive mode. 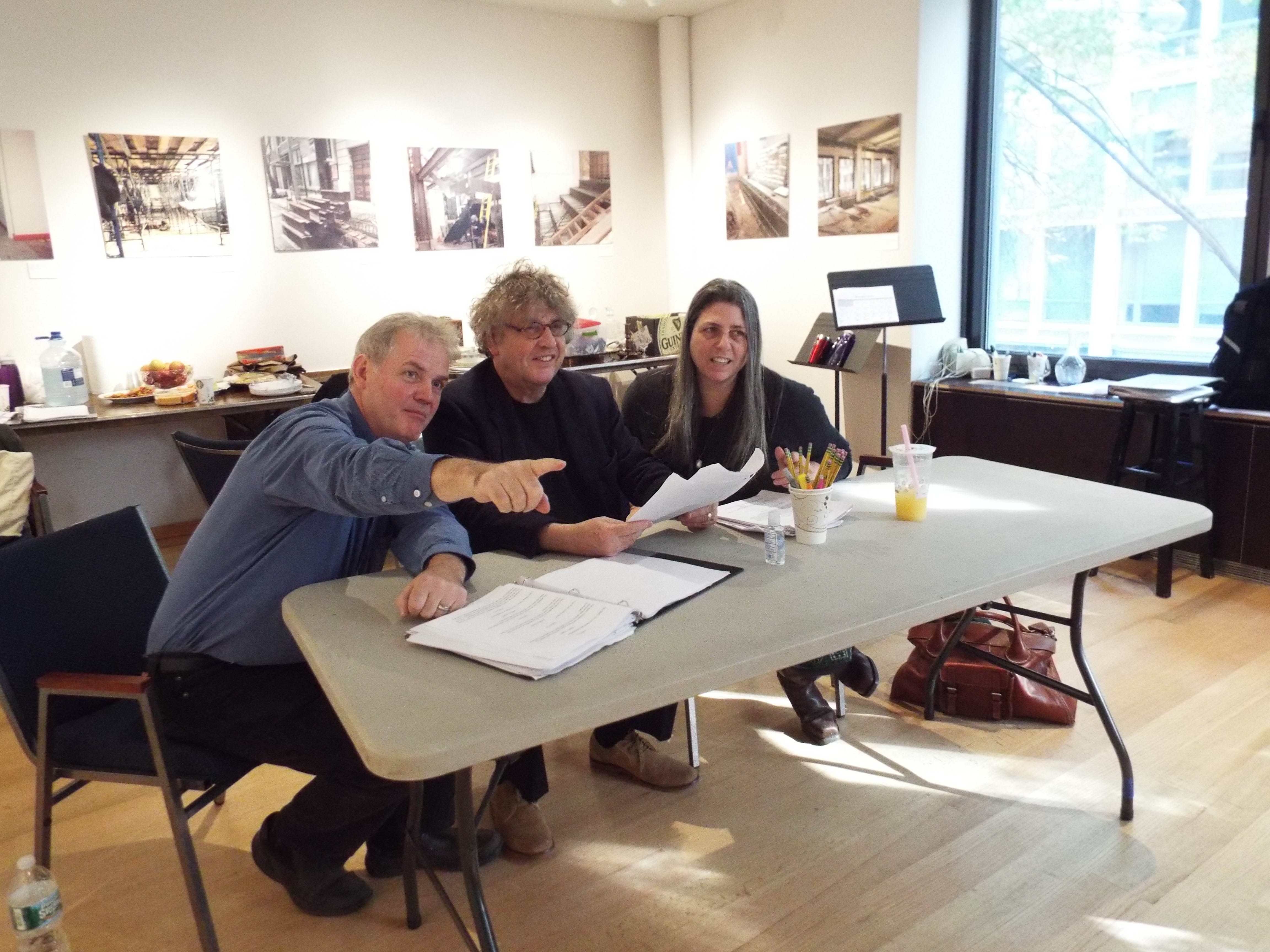 Ciarán O’Reilly, in the act of directing the show, with Paul Muldoon and novelist Jean Hanff Korelitz, who had the idea to do “The Dead” as an immersive theater production.

“I’ve loved ‘The Dead’ all my life,” said Ciarán. He’s pleased to have acquired as his lead actors the prominent American (Georgia-born), four-time Tony Award winner Boyd Gaines, and the Swiss-born, Welsh American Kate Burton, daughter of Richard Burton and his first wife Sybil. Gaines told Irish America: “I’m thrilled and honored for the opportunity to work with this wonderful group of artists on one of the finest pieces of writing in the English language.” He added, “This unique and evocative setting coupled with the words of James Joyce is a grand adventure for actors and audiences alike.”

Three major adaptations of the story have preceded the current one, including Hugh Leonard’s one-act version in 1967. John Huston’s universally admired (posthumously released) 1987 film starred Donal McCann and Angelica Huston along with a cast of two dozen, including such stalwart Irish veteran players as Donal Donnelly, Dan O’Herlihy, Helena Carroll, Frank Patterson, and Marie Kean. Roger Ebert called it “one of the great romantic films, fearless in its regard for regret and tenderness…. a film as quiet and forgiving as the falling snow.” Vincent Canby in The New York Times declared it “a magnificent adaptation of the James Joyce story…. That Huston should have dared search for the story’s cinema life is astonishing. That he should have found it with such seeming ease is the mark of a master.” Christopher Walken starred as Gabriel in a 1999 Broadway musical that won a Tony for Best Book of a Musical. 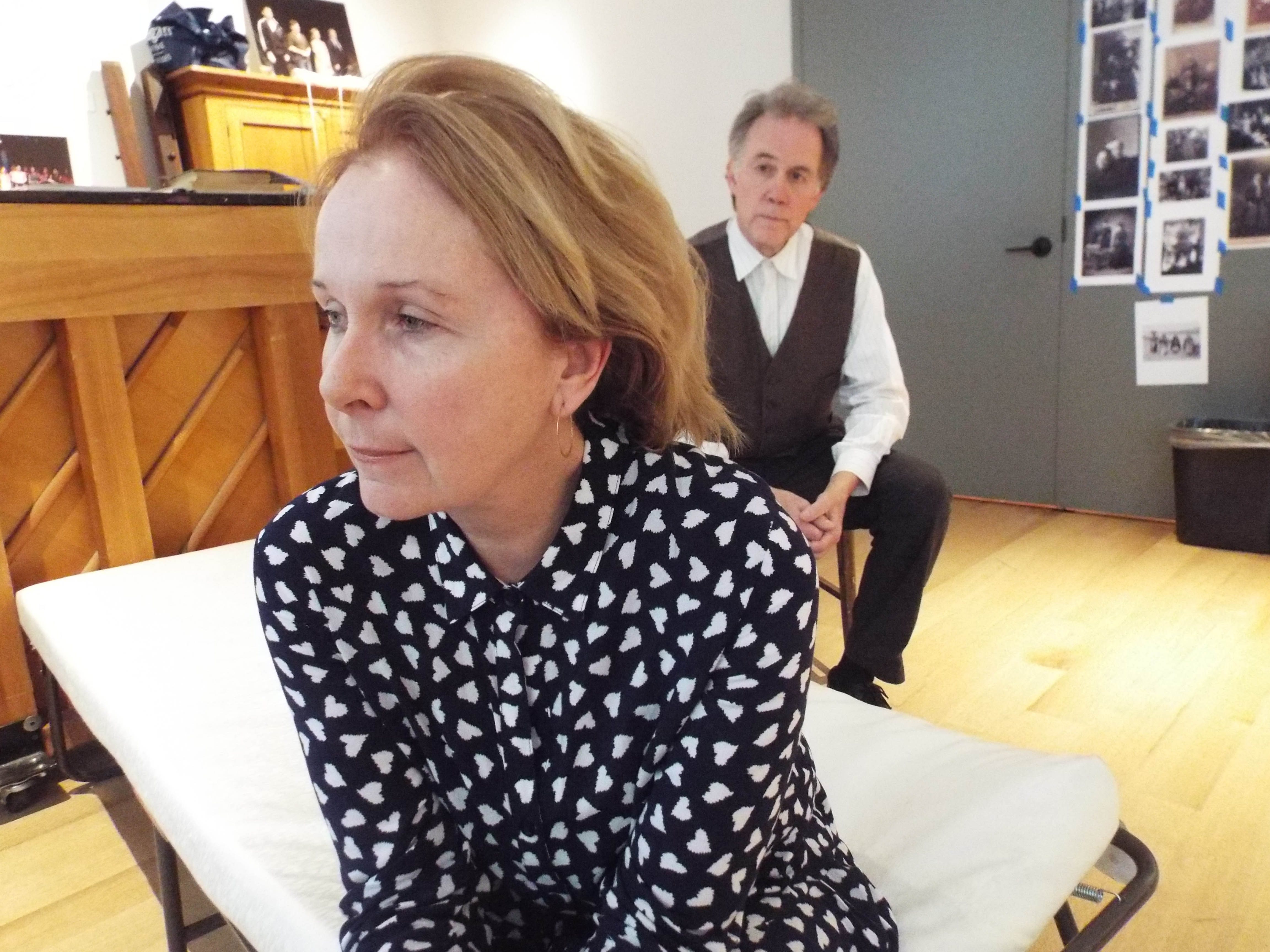 Kate Burton and Boyd Gaines, who play Gretta and Gabriel.

All of “The Dead” leads inexorably to the epiphanic moment in the closing pages when Gretta, upon hearing one of the guests sing “The Lass of Aughrim,” is overcome by the memory of a tubercular youth, Michael Furey, whom she had loved deeply years earlier in the west of Ireland and who died, she imagined, from love of her after he imprudently braved the elements to meet her in a wintry rain. As Gretta weeps at the recollection, “choking with sobs, and overcome with emotion,” Gabriel is envious of her dead swain, and is saddened at the realization that an ardor so profound has never been part of his own nature. He thinks, “Better pass boldly into that other world, in the full glory of some passion, than fade and wither dismally with age.”

And then, finally, perhaps the most famous and surely one of the most alluring paragraphs in all of literature. A few scholars have claimed to detect its antecedent in an 1876 story by Bret Harte titled (yes) “Gabriel Conroy” that opens with a rolling, rhythmical description of the Sierra mountains: “Snow. Everywhere. […] It had been snowing for ten days; snowing in finely granulated powder, in damp spongy flakes, in thin feathery plumes, snowing from a leaden sky steadily, snowing fiercely.” Joyce’s borrowing of Harte’s title suggests he was acknowledging the loan of those harmonies and repetitions to bring his own, far greater story, to a consummation: 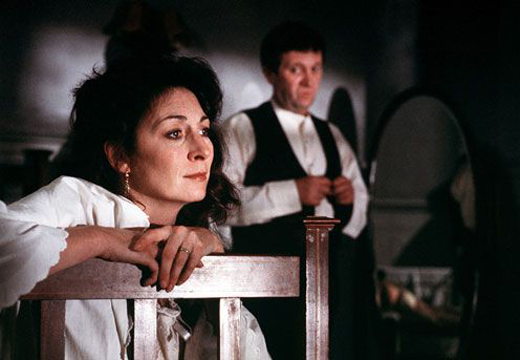 Anjelica Huston and Donal McCann in the film version of “The Dead.”

“It had begun to snow again. He watched sleepily the flakes, silver and dark, falling obliquely against the lamplight. […] snow was general all over Ireland. It was falling on every part of the dark central plain, on the treeless hills, falling softly upon the Bog of Allen, and farther westward, falling softly into the dark, mutinous Shannon waves. It was falling too upon every part of the lonely churchyard on the hill where Michael Furey lay buried.

[…] His soul swooned slowly as he heard the snow falling faintly through the universe and faintly falling , like the descent of their last end, upon all the living and the dead.”

Joyce, astonishingly, was in his mid-twenties and in the first fine rapture of his talent when he wrote “The Dead.” The story was Joyce’s “valedictory” to his homeland, the scholar Harry Levin wrote. “Gabriel Conroy was what Joyce might have become had he remained in Ireland.” Instead, he exiled himself to the Continent – Trieste, Rome, Paris, Zurich. But for all his wanderings, his freakish genius always had but one subject – Ireland. ♦

5 Responses to “Dinner and “The Dead””