New York City police officer and detective Mary Agnes Shanley (1896-1989) was the first policewoman to use a gun in an arrest. She made over 1,000 collars in her career and, at just 160 pounds, had the strength to subdue an adult male.

Born in 1896, Mary Shanley and family left the poverty of Ireland for the mean streets of Manhattan. Growing up it seemed to her that it was the police and the priests who got all the respect (and free food) but it also seemed to Mary that, for a female, becoming a policeman was as impossible as becoming a priest. Besides, she had been brought up to believe that a Catholic marriage should be a woman’s only goal and bearing children her only reward. So, Mary tried to conform. Briefly.

She went to work as a switchboard operator, a job way too boring and sedentary for the restless redhead. One day in 1931, she’d had enough, tore off her headset and joined the handful of women in the New York Police Department. It was a brazen, trailblazing move, especially since women had been given the vote only eleven years earlier.

On the force, Mary faced the “Blue Wall,” a brotherhood of policemen who despised the few female officers, belittled their looks and were suspicious of their sexuality. Subject to sexism and the silent treatment, Mary was defiant in public but in private she told her family that she felt like an exotic animal in the zoo. 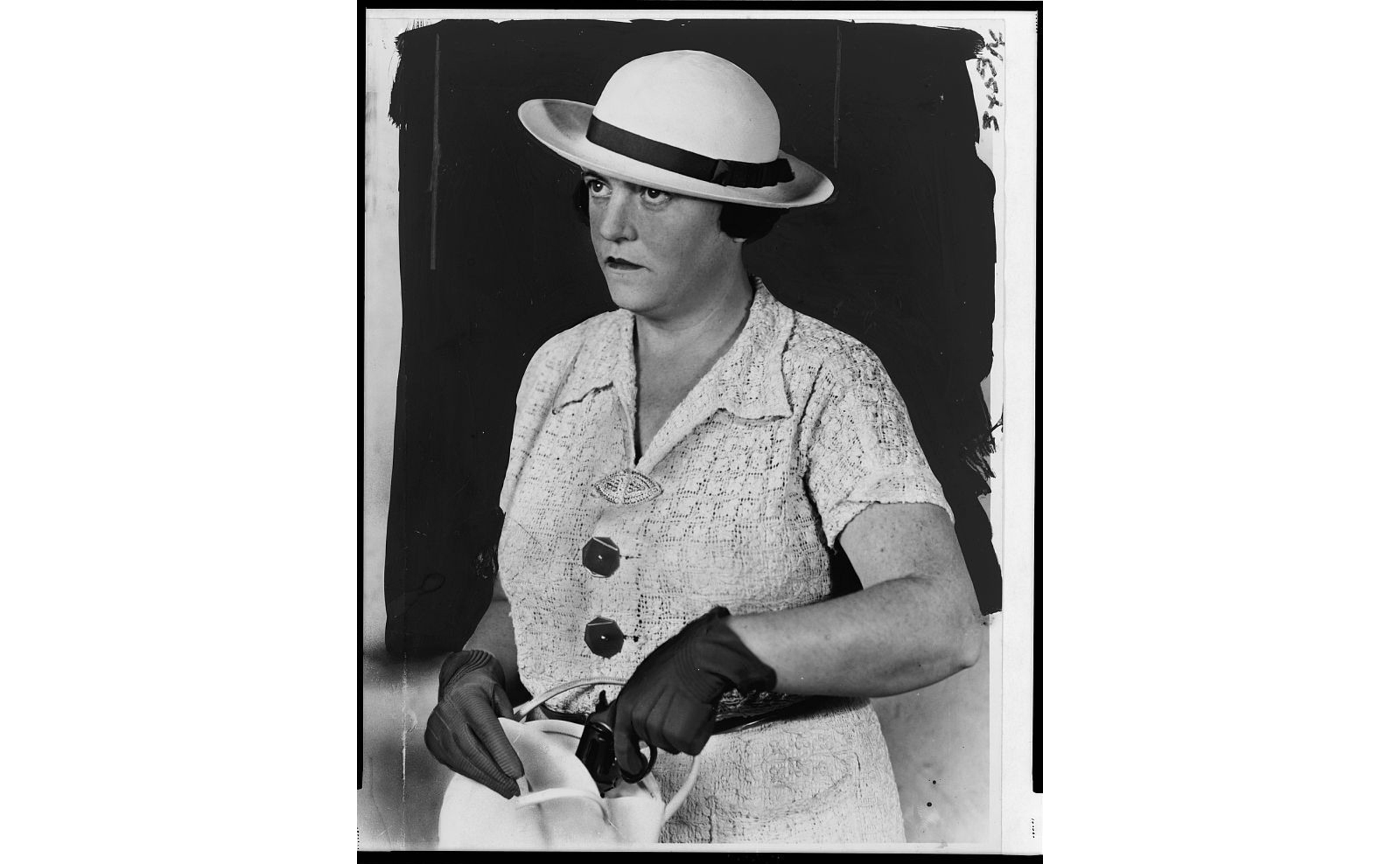 Shanley pulling a pistol from her handbag, 1937. Photo: Library of Congress.

During her months of training she dreamed of wearing a police uniform, but it wasn’t meant to be. Mary was put on “the woman’s beat,” going undercover to nail pickpockets, mashers*, shoplifters, purse snatchers, fortune tellers and seat tippers.** She often took a decoy, her niece Mary, and the two posed as mother and daughter. Little Mary Mullins proved to be an excellent cover; many years later, she related that Aunt Mary once confided that she could actually “smell a crook.”

Mary’s undercover guise was impressive: a snappy frock, smart hat, gloves, white patent leather pocketbook, and sturdy shoes that could only be described as old-fashioned nun shoes. She was supposed to look like a middle-class housewife on a shopping spree but in truth she looked more like a prison matron going to Sunday mass. She was 5’8” and claimed to be 160 pounds, although photos indicate that estimate to be somewhat conservative. She was fast, athletic, and stronger than most men.

When, in 1934, policewomen were allowed to carry guns, Mary was the first to make an armed arrest. From then on, she always carried her .32 caliber gun in her trusty purse, along with her (also trusty) flask of Irish whiskey. In publicity shots, of which there were many, she’s aiming her gun at an unseen perpetrator on her right. In others, her grim mug is facing the camera with a look that says “Go ahead, make my day,” or words to that effect.

She broke another barrier in 1939 when she was promoted to detective first grade. Mayor LaGuardia praised her as a “worthy representative of the police department,” sent her to London to arrest an international ring of scam artists, and upped her salary to a whopping $4,000 a year.

While her penchant for photo-ops irritated her (already irritated) fellow officers, it made her something of a celebrity in 1930s and 1940s New York. Even her minor triumphs made the news and the tabloids dubbed her, alternately, “Dead Shot Mary” or the “Annie Oakley of the NYPD.” The famed illustrator of the day, Nell Brinkley, featured an idealized Mary – younger, slimmer and definitely more feminine – in her “Heroines of Today” column every Sunday.

Mary Shanley was a character unique to the New York of her day, a colorful place of gangsters, molls, fast talking dames, and gumshoes packing heat. Her adventures offer a de facto visit to a bygone time in a bygone city:

– 1938, she pinched a pickpocket by swatting him across the face with her pocketbook, knocking him on his keister. “Well, I got him,” she told two patrolmen who had rushed to the scene to help, “and I can take him in myself.”

– She thought that two men entering Macy’s with large flats of cardboard looked fishy, tailed them and made her arrest as they were shoving men’s suits in a box.

– A mental patient was shooting up the perfume counters as customers and salesladies ran for cover until Mary commanded, “Put down the gun, boy!” He did.

– Sniffing around the Macy’s fur department, she caught a woman stuffing a Persian lamb coat into her girdle.

– She chased a masher (the nature of his mashing not specified) in 1935 around the cavernous Savoy theater only to have him turn around, punch her in the face and throw her down a flight of stairs. Mary got on her feet, made the collar, hauled him in to the station, and only later took herself to the hospital.

– Life imitated art (or rather, a cheesy movie) when, during a showing of Vera Cruz, Mary shot at a seat tipper on the run. The shots from her gun accompanied the shots from Burt Lancaster’s gun on the screen, a scenario that sent the tabloids into a frenzy.

– In 1937, the gimlet-eyed detective saw two career criminals – heading, as she later found out, to an armed robbery – descending the stairs of the Times Square IRT station. Mary took off in hot pursuit, shot a volley of gunfire, stopped the crooks and horrified the straphangers.

– She charged down Fifth Avenue after notorious racketeer, “Chinatown Charlie,” weaving in and out of well-heeled shoppers, waving her gun until she caught him.

– In St. Patrick’s Cathedral, Mary closed in on two con artists notorious for snatching the purses and picking the pockets of the faithful rapt in prayer. She caught them by firing several shots in the air. And it was during High Mass, too.

– Fans were disturbing Grace Kelly’s trousseau shopping on Fifth Avenue until Mary, convinced the crowd was lousy with pickpockets, stepped in and provided the princess-to-be with a one-woman security detail.

When she was on the job, Mary was all bravado, guts, and grit. She loved her independence. She also loved prizefights, Jimmy Cagney’s movies, Billie Holliday’s singing, and, especially, her best friend and confidant, Jiggs, her bulldog. But she lived a life that, saving Jiggs, was devoid of companionship, male or female. Whatever sexual appetites she may have had were successfully repressed or channeled into her work. She still played the salty broad in the macho culture of the precinct house but at home, she was alone and lonely. She tried and failed to find solace in her Catholic faith. In time, the occasional nip from her flask of Irish whiskey became steady guzzle and, really, who could blame her?

By 1941, she had a serious problem. In March of that year, at 3 a.m, she entered a Queens bar already having had quite a snootful. She and Jiggs sat on a stool and Mary asked for a drink. The bartender refused. She showed her badge and he still refused. At the other end of the bar John Huljes began insulting Mary, making fun of her figure and worse, knocking the Irish. The fat-shaming racist proved too much for Mary, she pulled out her .32 caliber, shot twice in his general direction but missed. Headlines, and not the kind she was used to, came the next day and she was demoted and suspended. After a year (which may have included a nervous breakdown), she was reinstated and her career took off for another 15 years.

In the course of 27 years, Mary made an astonishing 1,000 arrests. Still when the estimable New York Times announced her retirement, they called her “Mrs. Shanley,” claiming, falsely, that she was heading off to a log cabin (the “Mrs.” part of the story, more unlikely than even the log cabin).

When Mary joined the police, Americans were still uncomfortable with women voting and being in the work force. Thanks to her high profile and bravery, she inspired countless women to follow careers usually reserved for men, careers where they relied on their brains and determination rather than their looks and typing skills. She made the way for generations of women to enter law enforcement or the armed forces but by the time she died, in 1989, very few, if any, had ever heard her name.

It’s also important to recognize that, despite her remarkable arrest record and shooting skills, Mary managed to never kill a single one of her 1,000 suspects. There’s been no one like her since. Mary Shanley was one of the finest of New York’s Finest.

*Masher: a blanket term to describe a sexual predator; a male who, believing himself irresistible to females, makes unwanted sexual advances.

** According to the New York Times, a tipper is a midtown thief who sits behind women in theaters and, spotting a handbag on an empty seat, tips the seat from the rear with his foot and loots the bag. Tippers frequent tearjerkers, more effective in distracting sentimental women.

Leave a Reply to Robert Shanley