Stars of the Irish and Irish American stage triumph at the ninth-annual Origin’s 1st Irish Theatre Festival in New York.

Lovers of the smash HBO series Game of Thrones had the chance to see the infamous young King Joffrey (Jack Gleeson) in person over a couple of weeks off Broadway this fall. Gleason was just one of an incredible troupe of actors, writers, directors, and set designers to descend on New York in September for the ninth annual celebration of Irish drama known as Origin’s 1st Irish Theatre Festival.

Origin, founded in 2002 by George Heslin, a native of Limerick, is dedicated to producing the plays of contemporary Irish playwrights from around the world, balancing work by well-known writers and seasoned actors with the work of emerging artists.

The festival’s awards ceremony was hosted on October 3 by the actress Carey Van Driest at the American Irish Historical Society on Fifth Avenue.

Honor Molloy’s Crackskull Row, a painful play about incest and murder in poverty-ridden Dublin (produced in New York by the Cell Theatre), picked up the awards for Best Direction (Kira Simring) and Best Production.

Bears in Space also captured the hearts of the jury, which bestowed its Special Jury Prize on its ensemble cast, which included Quinn, Aaron Heffernan, Cameron Macauley, and Jack Gleeson.

Sonya Kelly was recognized as Best Actress for her outstanding performance in How to Keep an Alien, a play she wrote about finding love and then having to prove it to the government.

Dermot Crowley took home the Best Actor award for his performance in Brian Friel’s Afterplay, which revisits characters in Chekov’s Uncle Vanya and The Three Sisters. The play, showing at the Irish Repertory Theatre through November 3, is directed by Joe Dowling and, in addition to Crowley, stars veteran actress Dearbhla Molloy.

Also handed out at this year’s ceremony was the new Festival Fringe Award, which went to the cast and crew of Wilde at Home, the highly praised immersive staging of scenes from Oscar Wilde, which was brought in from Northern Ireland by Queens University Belfast and the Happy Days Enniskillen International Beckett Festival. David Grant of Queens University restaged the production in the landmark home of the American Academy of Dramatic Arts on Madison Avenue, with a cast consisting recent graduates from the academy’s premier acting ensembles.

The festival’s Origin Award, for noteworthy and often unsung contributions to the Festival, was renamed this year in honor of the recently deceased Irish actress Bairbre Dowling, and went to Jane McCarter, the director of Arts and Culture at the New York Irish Center in Long Island City, which staged multiple film and theater events. 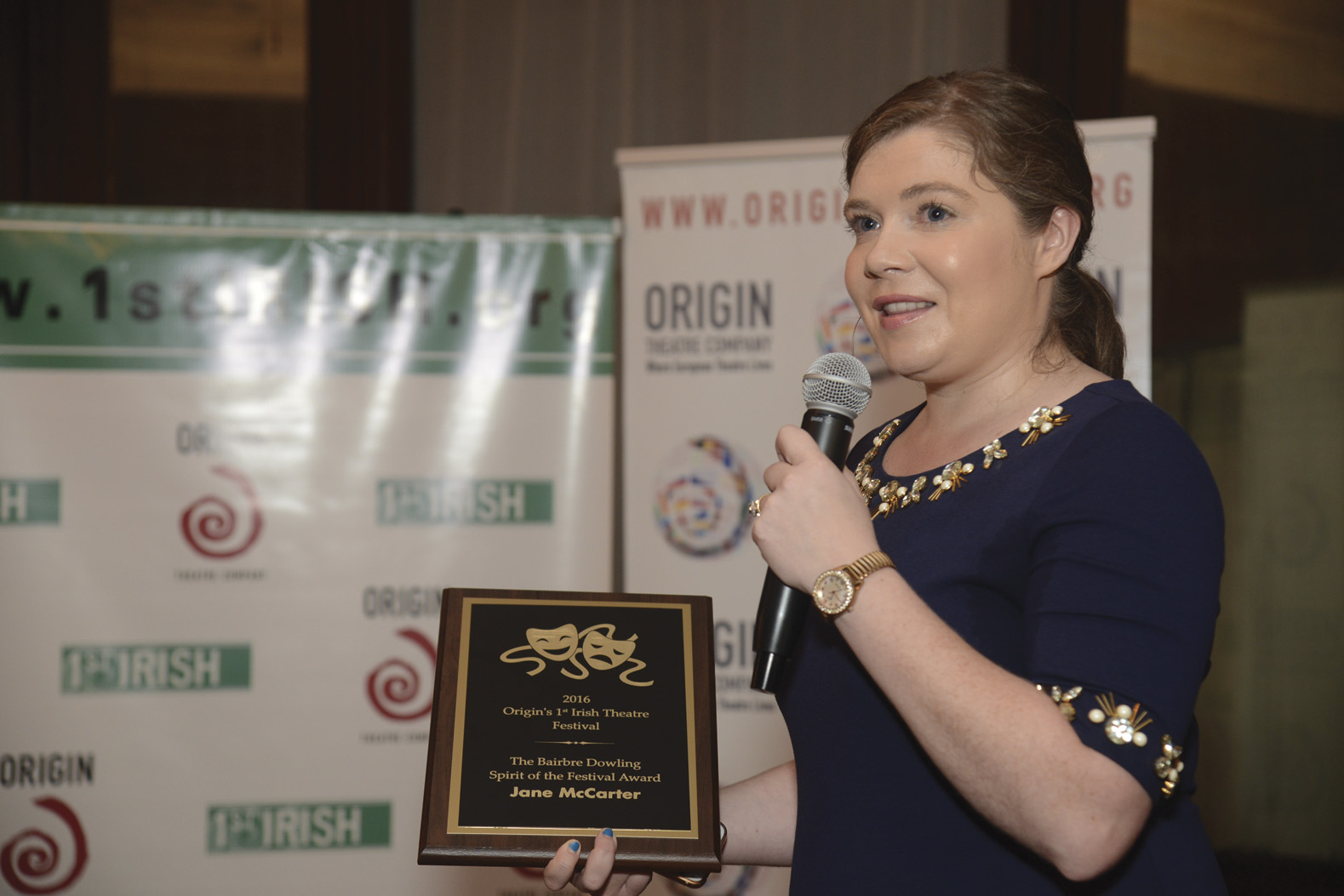 Jane McCarter, director of Arts and Culture at the New York Irish Center in Long Island City, who received the Bairbre Dowling Spirit of the Festival Award. (Photo: James Higgins)

The Audience Choice Award, based on online ballots submitted by attendees, went to Thomas Burns Scully, author of Dorothy of Nowhere, the story of a teenager who discovers love, poetry, and tragedy all at once.