Mary Chase: The Woman Behind “Harvey”

The story of playwright Mary Chase and how the classic comedy Harvey was influenced by her Irish heritage.

During summertime in cities and towns across the U.S., movies are screened outdoors. Scheduled for showing during the summer of 2016 at New York City’s Bryant Park Film Festival was a 1950 Academy Award-winning comedy based on a Pulitzer Prize-winning play – Harvey, starring James Stewart in what was said to be his favorite role. The film is popular on DVD and is often aired on cable’s Turner Classic Movies station. The play is one of the most frequently produced by amateurs and professional players in the history of the American theater. It has been published in nearly every language and performed in nearly every country. James Stewart himself, after subbing for the original Broadway star Frank Fay during Fay’s vacation break, appeared on Broadway in a revival in the 1970s, took the show to London, then did it on television. It was revived again on Broadway in 2012 with Big Bang Theory star Jim Parsons.

Now, I know what you’re thinking. Harvey? That’s the silly show about that guy, Elwood P. Dowd with the big invisible rabbit friend, whose sister, Veta, tries to get him committed to a sanatorium? Yes. Harvey is part of the silly genre of American comedy like Arsenic and Old Lace and You Can’t Take It With You, two other old-school “sillies” that still draw laughs. Harvey has brought fun to audiences for over 70 years and is the product of the creative genius of an Irish American playwright named Mary Chase. The New York Times review of the original production in 1944 said, “Harvey is worth knowing.” So, I think you’ll find, is Mary Chase.

Mary Chase was born Mary Coyle, the youngest of four children, in Denver, Colorado on February 25, 1907. Her parents were Irish immigrants who had both come to seek their fortune in the American West. They were not successful and Mary was raised in a working class neighborhood that was considered “the wrong side of the tracks.” 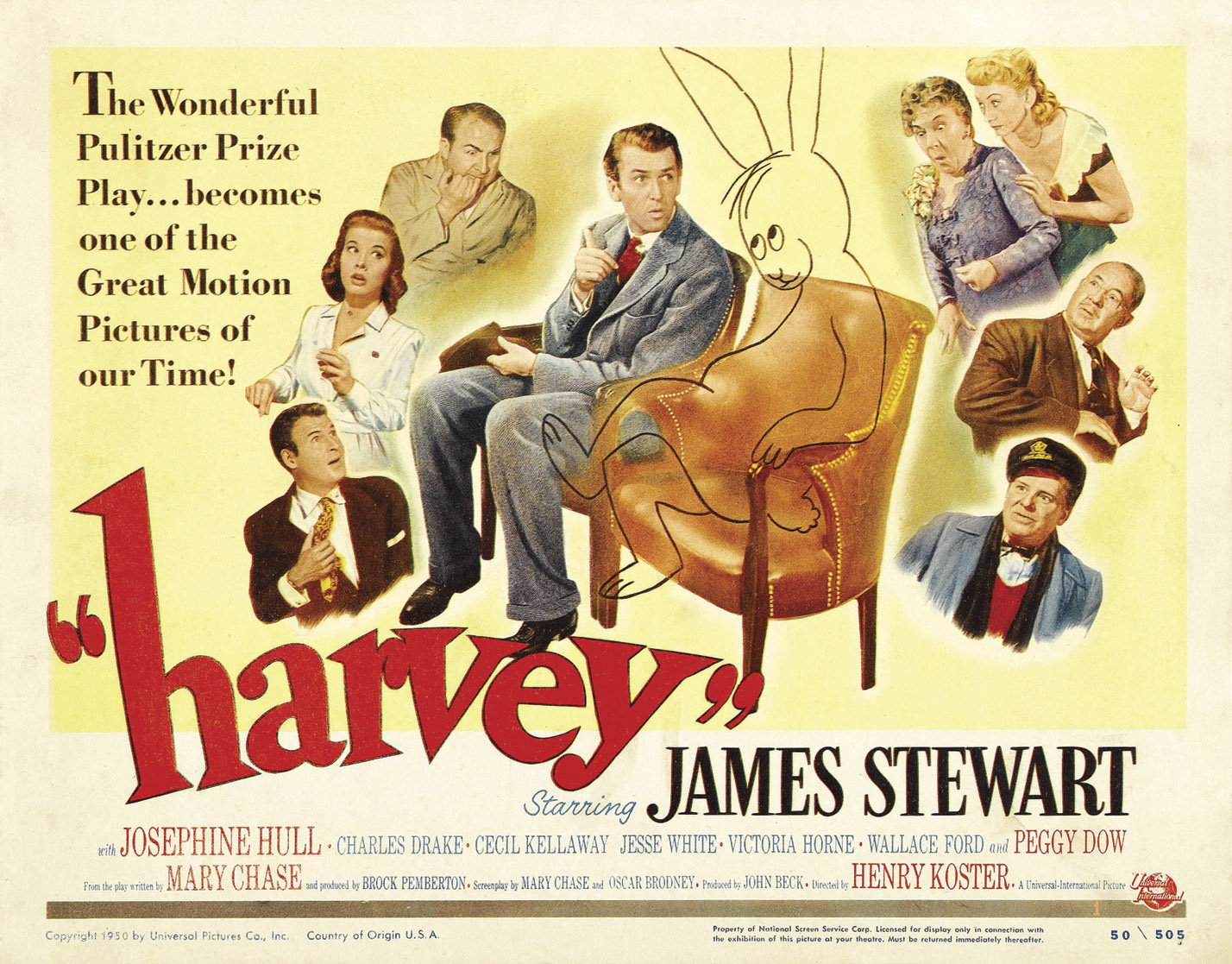 James Stewart, depicted here in the original movie poster for Harvey, claimed Elwood P. Dowd to be the best role of his career.

Mary spoke about her childhood in an interview in Toronto with the CBC towards the end of her life and explained where the giant rabbit came from. “I was raised on Irish folk tales told to me by my uncles. I had four bachelor uncles. I think that’s always had an impact on my work. Harvey the pooka, and the changeling in Mrs. McThing… I have to say, I’m very grateful for that heritage.”

The Pooka was Harvey’s original title. Pooka comes from the old Irish púca, meaning “goblin” – a friendly spirit in animal form who loves to talk and can only be seen by those who believe in him.

Mary also developed a lifelong love of reading as a child. In the same CBC interview, she says “I came across a book a few years ago in our house in Denver. In the flyleaf it said, ‘My name is Mary Coyle and I have just read this book. Don’t you think I’m smart?’ Eight years old! What a brat!”

Mary graduated high school at 15 and went to the University of Denver for two years, but left to accept a position as a reporter at the Rocky Mountain News. Though her interests lay with a more serious type of journalism, she wound up writing “Society Notes.” Her interest in progressive politics led her to help found the Denver branch of the Newspaper Guild and to become an active supporter of unions and working class causes. She was legendary for joining picket lines wearing a fancy hat and a black satin dress.

She met her husband, Robert Chase, a fellow reporter who eventually became managing editor at the News. They married in 1928 and had three sons.

Mary left her active reporting career to focus on her family and became a freelance writer. She wrote for two news services between 1932 and 1936, wrote radio programs for the Teamsters Union, wrote a screenplay, Sorority House, based on her disappointing college social life and sold it to the movies, and did publicity for the National Youth Administration.

As a teenager she used to hang out in Denver’s theater district. Now, it was her turn to join the wonderful world of footlights, applause and broken hearts. She wrote a play called Me, Third which opened in Denver in1936 and was a big hit. Alas, it opened on Broadway in 1937, retitled Now You’ve Done It, and was a big flop. As Mary said years later, “The reviews were brutal.”

How did Mary come to write Harvey and set herself up to be judged again by the Broadway theatre critics? In her own words from more of the CBC interview:

“I came to write Harvey after having a bad flop on Broadway in the ’30s. I decided at that point that the theater was probably not for me and I settled down to raise my three boys. I had come to terms with myself and my life and I was quite happy. I was married to a wonderful man and had three fine boys. Then, one day in the early years of World War II, something happened which changed my life. Across the street from our house was an apartment house. As I was leaving every morning at 8:15 with my boys, a woman would emerge from the door of the apartment house and go in the opposite direction, to the bus to go downtown to work. I didn’t know the woman, but I heard she was a widow with one son in the Naval Air arm who was a bombardier in the Pacific. One day, I heard that her son was lost. Things like that were happening to so many people then, it wasn’t what jolted me so much as the fact that in a week or ten days I saw this woman leaving the apartment house, going a little more slowly to catch the bus to go back to work. She began to haunt me. Could I ever think of anything to make that woman laugh again? I knew she wouldn’t laugh at a comedy about sex or money or politics. I kept looking for ideas and rejecting them. Then, one morning, I awoke at five o’clock and saw a psychiatrist walking across our bedroom floor followed by an enormous white rabbit and I knew I had it. I worked on it for a year and a half and sent it to my friend, Brock Pemberton, Antoinette Perry’s partner. Antoinette Perry is a Denver woman (she became the director for Harvey), and I knew them both. They had produced my first play – a flop, a bad one. So I sent them this play, and it opened to rave reviews and ran four and one-half years. I came back to Denver after the opening and the woman across the street had moved, and I didn’t know where she moved so I never met her. But I kept receiving letters from people who had cousins and brothers and sons in the war, saying ‘We’ve seen the show and we’ve had the first laugh since.’ So I felt then that somehow, I had done what I set out to do.”

A smash hit. After almost two years and 50 re-writes, some of which Mary read to her cleaning woman, Harvey was on Broadway. Mary was awarded an honorary doctorate from the University of Denver, an award from the Colorado Authors League and, of course, the Pulitzer Prize. The movie rights were sold for $1 million. The movie was also a big hit. James Stewart and Josephine Hull, who played Veta, were both nominated for Oscars and Golden Globes. Hull won both.

Sadly for Mary Chase, it all became a classic case of “be careful what you wish for.” In a 1954 interview with Cosmopolitan magazine titled “Success Almost Ruined Her,” she told the story of what happened when she returned to Denver. Many of the people in Denver society who had snubbed her in her youth and girl reporter days now showered her with attention. Portrayed by the press as a simple housewife, rumors started to circulate that she didn’t really write Harvey at all. The woman who said, “I didn’t write it for the money. I wanted to make people laugh” was besieged by people looking for a hand-out. “I became suspicious of everyone,” she said. The woman who loved practical jokes and had a great sense of fun became depressed and turned to drinking. She realized she needed help and joined Alcoholics Anonymous. In 1955, she founded House of Hope, a Denver non-profit that provides help to female alcoholics.

Though Harvey was her masterpiece, she did write other plays. After Harvey, The Next Half-Hour was a flop. She then decided she would write only for children. Happily, her next play, Mrs. McThing, was a hit and was the first children’s play to open on Broadway. Another play, Bernadine, about a group of teenagers based on her sons and their friends, was a modest success and sold to the movies. She also wrote several well-received children’s books.

She always loved the creative process. “It’s only when I’m writing that I really feel complete. When I’m in one of my writing trances, I am cushioned against the sadness and grief of the world.”

At the end of her life, she was working on a musical version of her great play called Say Hello to Harvey. She died of a heart attack on October 20, 1981.

Bless you and thank you, Mary Chase, for having the talent, the ambition, the imagination, the patience, and yes, the serenity within yourself to work on Harvey for over a year, and in your interviews, when you were asked what was really important – the glittering prizes of fame and fortune, or the real prize of bestowing your audiences with the priceless gift of laughter, and receiving their love and gratitude back? You had the heart and the wisdom to know the difference. ♦

3 Responses to “Mary Chase: The Woman Behind “Harvey””