Frank Shouldice, and his father, Frank, at the unveiling of a plaque in Boyle, County Roscommon, in July. The plaque acknowledges the contribution made by volunteers from the area, including the author’s namesake, in the fight for Irish freedom. (Photo: BoyleToday.com)

How the 1916 commemorations helped people connect on a personal level.

“Everything is repeated, in a circle. History is a master because it teaches us that it doesn’t exist. It’s the permutations that matter.”

We have had much to celebrate this year. Commemoration of the 1916 Easter Rising had been anticipated for so long that when it finally arrived it felt like it suddenly crept up on us. This was partly due to the fact that Easter came very early in this year’s calendar, which meant that the main Rising celebrations kicked off a full four weeks before the actual date in 1916.

And so in March rather than April a massive military parade stepped through Dublin city centre to mark the centenary of these historic events. The parade featured all the levers of state of the Irish Republic – including the army (complete with tanks and artillery), gardaí (Irish police), emergency services, prison officers and members of the civil service. Even sniffer dogs from airport customs got a look in before the air force made a spectacular pass over O’Connell Street. The message in its jetstream was loud and clear; 100 years after a militant group of Irish nationalists boldly declared a republic, we stand today as an independent, self-governing, modern European 26-county state.

If there was a touch of triumphalism about it – although it was more an expression of pride – northern nationalists and unreconstructed republicans felt left out in the cold. Why or how, they wondered, could we celebrate the Proclamation when its aspirations of an egalitarian 32-county republic have not been fully achieved?

There were other questions whistling down windswept O’Connell Street that day. At a time when public trust in government is at an all-time low, I wondered what version of patriotism might flash through the minds of those basking in the VIP review stand when the big parade filed past. 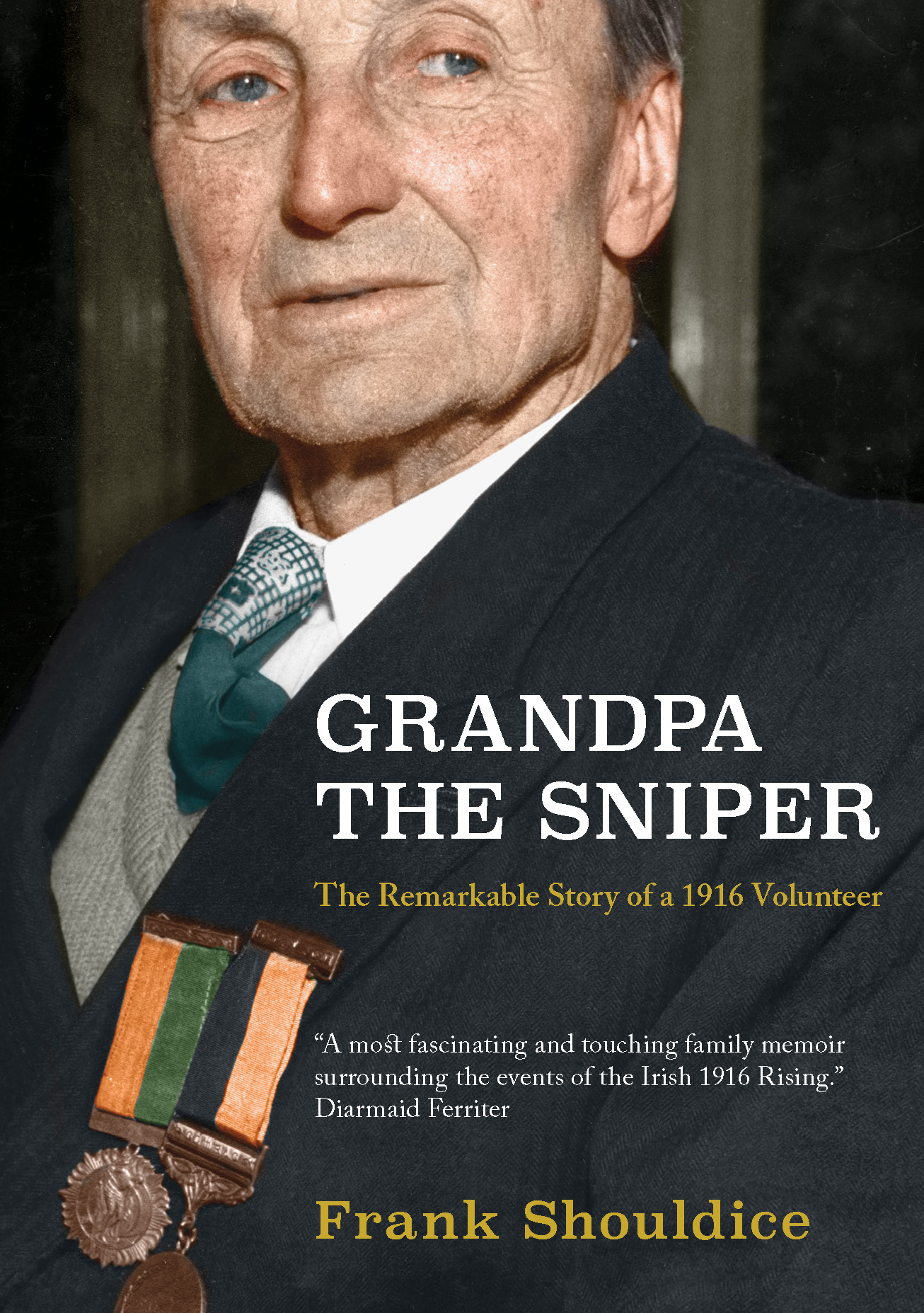 Grandpa The Sniper, published by The Liffey Press, is available in the U.S. through DuFour Editions at irishbooks.us/rising1916, priced at $28.

President Michael D. Higgins took the salute at the General Post Office (GPO), the very site of Padraig Pearse’s seismic decree on Easter Monday, 1916. The President and his wife Sabina were flanked by senior army officers, Taoiseach Enda Kenny, members of the cabinet, opposition TDs (members of the Irish parliament) as well as some previous cabinet ministers who presided over the virtual bankruptcy of the Irish state just eight years ago.

Ireland is not the only modern democratic state presently trying to work itself out of a severe economic downturn. The wider difficulties are indeed global, but the self-inflicted origins of Ireland’s near-collapse insinuate a culture of personal greed within senior business, banking and official circles that it is incompatible with the national interest. Should we invert Kennedy’s famous maxim for the top echelons of Irish public and commercial life – ask not what you can do for your country, but what your country can do for you?

These thoughts ran through my mind when my father and I made our way to a special area set aside for relatives of the men and women of 1916. This was an intensely proud day for the direct descendants of those who had taken up arms a hundred years ago. Of course the 2016 celebrations were always going to be tricky. Claims by rival political factions to be the true inheritors of the 1916 republican tradition will invariably get lost in the murk of those asserting their own legitimacy when writing – or rewriting – history.

My own inheritance made me both a participant and keen observer of this year’s events. Frank Shouldice, my grandfather and namesake, played a very significant role in Easter Week as a member of ‘F’ Company, 1st Dublin Battalion of the Irish Volunteers, along with his older brother Jack. Although my grandfather considered himself a Mayo man, the family came from Ballaghaderreen – the town was transferred to Co. Roscommon from Co. Mayo in 1898. Both brothers joined the Irish Republican Brotherhood (IRB), a secret revolutionary organisation, when they were working for a time in London.

Under Ned Day’s command at the Four Courts garrison, they set up defensive positions at North King Street to prevent British troops moving freely around the city’s northside. As a sniper, my grandfather – aged 23 years at the time – was posted at the top of the Jameson distillery malthouse, whereupon a British army sniper’s bullet missed his eye by inches. He went on to play his part and ‘F’ Company exacted a very heavy toll upon the South Staffordshire Regiment sent to oust them. In fact, the exchange at North King Street was later described by the disgraced British commander General John Maxwell as the scene of the fiercest fighting all week.

The intensity of exchanges there was later used as an excuse for South Staffordshire officers murdering 16 unarmed local men unconnected with the Rising. Nobody was ever brought to trial for the North King Street Massacre although, as I discovered from research, the Home Office in London was fully aware of what had taken place.

Like so many of his comrades, my grandfather said very little about the entire experience of taking part in the Rising and then the War of Independence. Apart from co-writing his account of a prison escape from Usk Prison in Wales in 1919, there was one notable exception to his self-imposed silence. At the end of the 1950s, Frank and Jack spent time with historian Max Caulfield, who was researching The Easter Rebellion, a definitive work about the Rising. The brothers explained the mechanics of street fighting at North King Street and my grandfather discussed how his role as a sniper at the Jameson malthouse led to unavoidable and gruesome conclusions.

He told Caulfield, “About 15 Tommies turned into Beresford Street right under me. I was on the iron platform and all I had to do was fire down upon them. One by one we knocked them all over. It was a terrible slaughter and to this day I can’t understand why they decided to rush things.”

From a position of shoot or be shot, the Shouldice brothers held British officers in contempt for effectively sending these young soldiers to their deaths. Receiving the order to surrender after six days Frank and Jack were despatched to Stafford Prison and Dartmoor respectively – as a lieutenant with the Irish Volunteers Jack’s death sentence had been commuted to five years’ hard labour.

My grandfather was then transferred alongside Michael Collins and hundreds of others to an internment camp in Frongoch, north Wales. Upon his release in December 1916, I discovered from classified documents that he was under close surveillance by Dublin Castle’s Special Branch and ‘G’ Division – later wiped out by Collins’s “12 Apostles” – with surveillance reports regularly transmitted all the way to British intelligence at MI5.

Subsequent involvement through the War of Independence saw him incarcerated for spells at Usk Prison, Wandsworth, Boyle Barracks, Mountjoy, Pentonville, Wormwood Scrubs and, lastly, Brixton Prison in London. They were turbulent years during which he sacrificed so much but did so without hesitation or complaint. When the Anglo-Irish Treaty led to civil war in Ireland, both Frank and Jack refused to take sides simply because they would not take up against former comrades. They felt the Treaty, however imperfect, was not sufficient reason to turn Irish nationalists against each other.

I was aged 11 years when my grandfather passed away. As he lived with us at home in Dublin, my childhood memories are clear of a warm but private man whose bearing showed no apparent contradiction at being both modest and proud of his significant contribution to Irish independence. My initiation to Gaelic games at Croke Park began with him lifting me over the metal turnstiles into football or hurling matches in the old stadium. He never saw fit to mention that he was once himself a gifted inter-county footballer with Dublin and later with his beloved Mayo.

Like so much of his story, particularly his many achievements, he possessed an interior life that remained largely undisclosed. As I would only discover when I began to research a book about him, there were many elements to a legacy which was far, far richer than he would ever let us believe.

Events through 2016 have given me a particular perspective. Over the past ten months I have spoken at events all around the country about Grandpa The Sniper, the book I wrote about him. It has been a memorable and rewarding experience through which I have met a number of direct descendants of my grandfather’s comrades-in-arms. As I recounted his story, several of the descendants have been moved to tears, no doubt re-living their own private memories.

It has also re-affirmed the strange circularity of history. For example, in 1966 as part of the half-centenary of the Rising, my grandfather, the last surviving 1916 veteran ostensibly from Co Roscommon, was requested to unveil a plaque to Padraig Pearse in the town of Boyle. My grandfather did not seek the limelight but agreed to unveil the plaque outside the courthouse provided he did not have to address the crowd. He duly travelled to Boyle with my father and performed the ceremony.

In July 2016 I was asked to unveil a new plaque to commemorate the centenary. Honoured to pick up where my grandfather left off, I travelled to Boyle with my father, one of few witnesses to both symbolic events. History was repeating itself and we drew the cord together, replicating what, as my father calmly observed, his father did “fifty short years ago.”

As the centenary draws to a close it can be safely said that the commemorative year has been a success. Events throughout the country were attended by huge crowds and public interest maintained a consistently high level. It has reawakened a sense of national identity and enlivened our curiosity about the past. That enthusiasm may fizzle out eventually, but the delivery of a copy of the Proclamation to every national school in the country at Easter fired children’s imagination in a way nobody quite anticipated.

Amid these celebrations, nationalists in Northern Ireland have good reason to feel a little left behind. But while marking 2016 expresses pride in the achievement of Irish self-determination, it also serves to focus scrutiny on what exactly we have done with such hard-fought independence. Such reflection is frequently given to disappointment and anger that we have endured – and allowed – such careless stewardship of our own course. Maybe the centenary is just the time for self-interest to take a back seat. By learning to appreciate the sacrifices of those who selflessly brought us freedom, we have the perfect opportunity to show that we deserve it. ♦

The Man Who
Wanted to Fly

A New York Film Premiere The Irish Repertory Theatre presents a free virtual film premiere of The Man Who Wanted to...