The Pain and the Pleasure

Sharon on the first leg of her climb up Croagh Patrick, Ireland’s holy mountain.

Reek Sunday, the last Sunday in July, when pilgrims climb Ireland’s holiest mountain, Croagh Patrick went ahead with far few climbers this year. Fr. Charlie McDonnell, parish priest of Westport, speaking to Patsy McGarry for the Irish Times, explained that the numbers at the mountain were “the smallest attendance of any Sunday this year, estimating that “between 400 to 500 compared to the normal 5,000” on Reek Sunday.

The numbers were “very manageable and everyone who really wanted to, could climb.” Appeals for people to stay away this year had been “very successful,” Fr. Charlie said, and “the local people were delighted.” Those who did turn up “were made feel welcome.”

Long time contributor, Sharon Ní Chonchúir, did not make the trip from Kerry to Mayo to participate this year as she has in the past. Here’s her story of a grueling climb in the rain followed by a blissful spa treatment.

Five miles outside the County Mayo town of Westport, a conically-shaped mountain looms over the surrounding countryside. This is Croagh Patrick. It’s 2,500 feet high. It’s a place of ancient history. It’s associated with Ireland’s patron saint and on a rainy day this June, I was determined to climb it.

The rain was lashing from the heavens when I began my ascent. The summit was shrouded in cloud. However, this didn’t mean that I was the only one setting out to climb the mountain. Croagh Patrick has been a pilgrimage site since the Stone Age when pagans would gather here to celebrate the beginning of harvest season.

The mountain continues to be popular with pilgrims because it is said that it was on its summit that Saint Patrick completed a 40-day Lenten fast in the year 441AD. Legend also has it that it was from here that he banished snakes from Ireland forever. To this day, one million people follow in the footsteps of Saint Patrick every year by making their pilgrimage to the top of the mountain.

A statue of the saint marks the start of the climb and I took a moment here to contemplate the challenge ahead. Because, whatever anyone says about this climb, I can assure you that it’s not easy. It wouldn’t be a place of pilgrimage if it were.

The first stage is rocky. The path is strewn with pebbles, stones and boulders of granite, which means that you have to be very careful where you place your feet. Every step has to be considered and this makes the climb a more mindful one than most.

Luckily, I had rented hiking sticks from a stall at the bottom of the mountain. These made the going a little easier. So too did the fact that I was wearing proper hiking boots and all-weather rain gear.

The rain clouds cleared occasionally as I climbed and during those rare moments, I took the opportunity to stop, catch my breath and take in the increasingly impressive views of Clew Bay behind me.

Clew Bay is one of the most beautiful bays in all of Ireland. There are said to be 365 islands in the bay, one for every day of the year. These islands are partly-drowned drumlins, which are steep-sided hills that were formed during the last Ice Age. 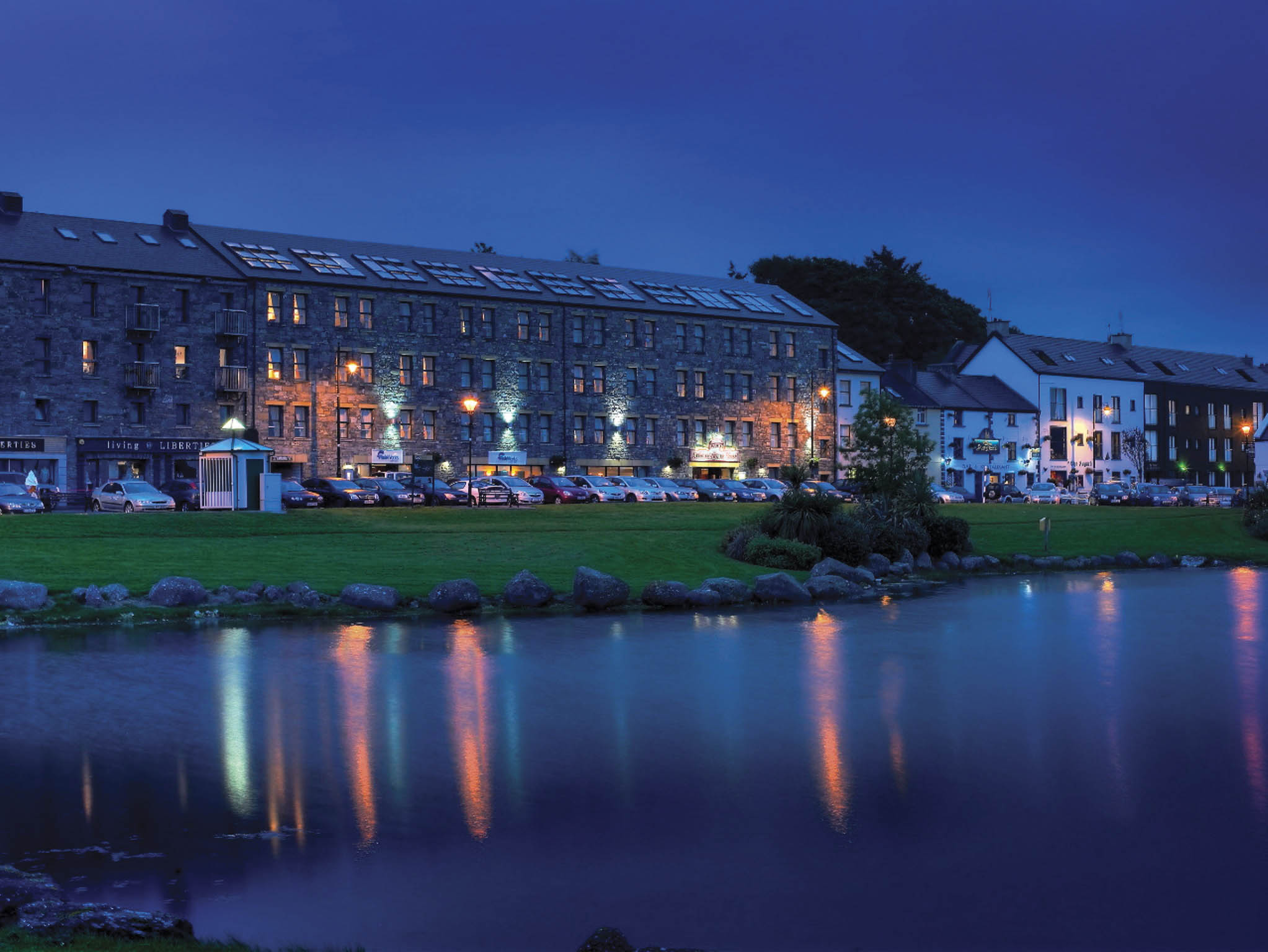 However, the sunshine never lasted and the driving rain hastened my ascent of the mountain. After an hour or so, I arrived at the top of the first summit. Then I began a short descent before taking on the more challenging and much steeper climb to my final destination.

The incline here is something like 60 degrees and once again, the path is strewn with rocks. At times, the climb is so steep that all you can see is those rocks ahead of you. You lose sight of the top and of how far you still have to go.

In fact, it was only when I glimpsed a small chapel through the mist that I realized I had made it to the summit. On the last Sunday of July, known locally as Reek Sunday, this chapel shelters a priest who says mass for the thousands of pilgrims who climb the mountain on that special day. Many of those pilgrims make the climb in their bare feet. Having struggled to reach the top while wearing tough hiking boots, I’m still amazed at how they do it.

With the rain once again pelting down, it was time to begin my descent. During the most challenging moments on my way up, I had consoled myself with the thought that the climb down would be easier. I was wrong.

The rocky ground meant that my steps were cautiously slow. My knees were bent in constant readiness for a fall. By the time I reached the bottom, my legs felt incredibly wobbly.

However, that physical exhaustion was outweighed by the sense of achievement I felt at having conquered one of Ireland’s best known mountains. I had also thoroughly enjoyed the easy companionship of my fellow climbers. On the way up, those who passed me on their way down gave me the words of encouragement I needed to persevere and on my way down, I did the same for those just beginning their climb. 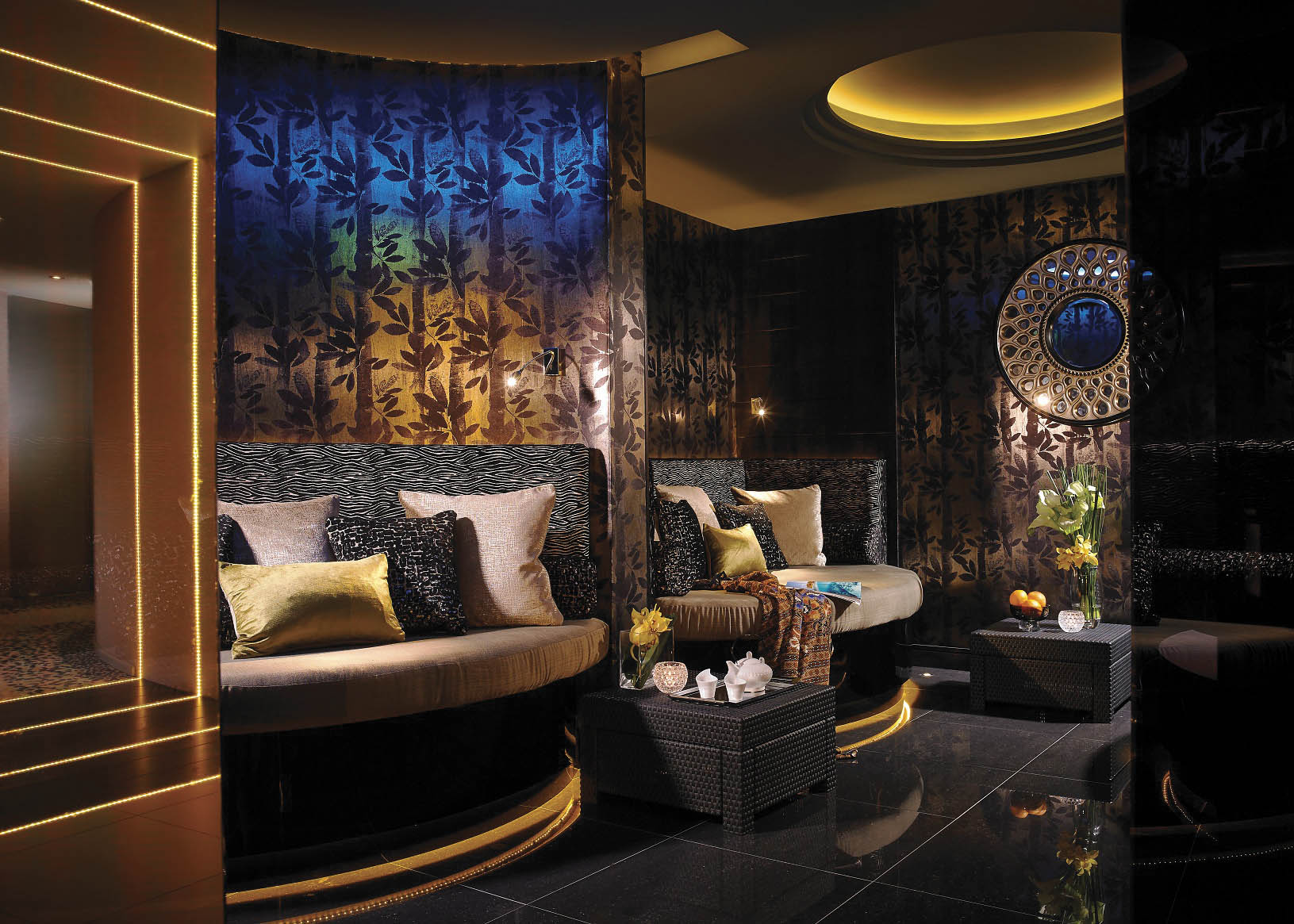 The Relaxation Room at Spa Veda.

I also had a treat in store. That morning, before setting out for Croagh Patrick, I’d booked myself into the Spa Veda at the Westport Coast Hotel. Only a five-minute drive from the foot of Croagh Patrick and perched right at the edge of Clew Bay, this four-star hotel offered the reward I needed after my penitential morning.

The spa combines the utmost in modern luxury with an ancient Indian system of health called Ayurveda. All of the treatments on offer are carried out by experienced Ayurvedic practitioners from Kerala in India.

Arriving at the spa, I changed into my swimsuit and relaxed for a while in the pool before soaking my tired limbs in the hot tub. I then retreated into the darkened relaxation area, where I reclined on plump cushions and soft music soon soothed me into a state of blissed-out doziness.

Before I knew it, it was time for my treatment. A smiling Indian lady called Gigi poured hot oils onto my exhausted body and massaged all of the exertions of the day away. I forgot all about my wobbly legs and surrendered to the sheer pleasure of the experience.

There was more pleasure to come. I went back to the relaxation area for more rest and recovery and then had a session in the aroma therapy steam room, followed by a dip in the ice fountain and finally a tropical shower experience. I finished my day by treating myself to dinner in the bar overlooking the bay. It may not be how the pilgrims of old did it, but that was how I spent my day climbing (and recovering from climbing) Croagh Patrick.

I hadn’t finished indulging myself either. The following day, I travelled across the county border into Leitrim where I found a much simpler and much more secluded place to rest and recover. 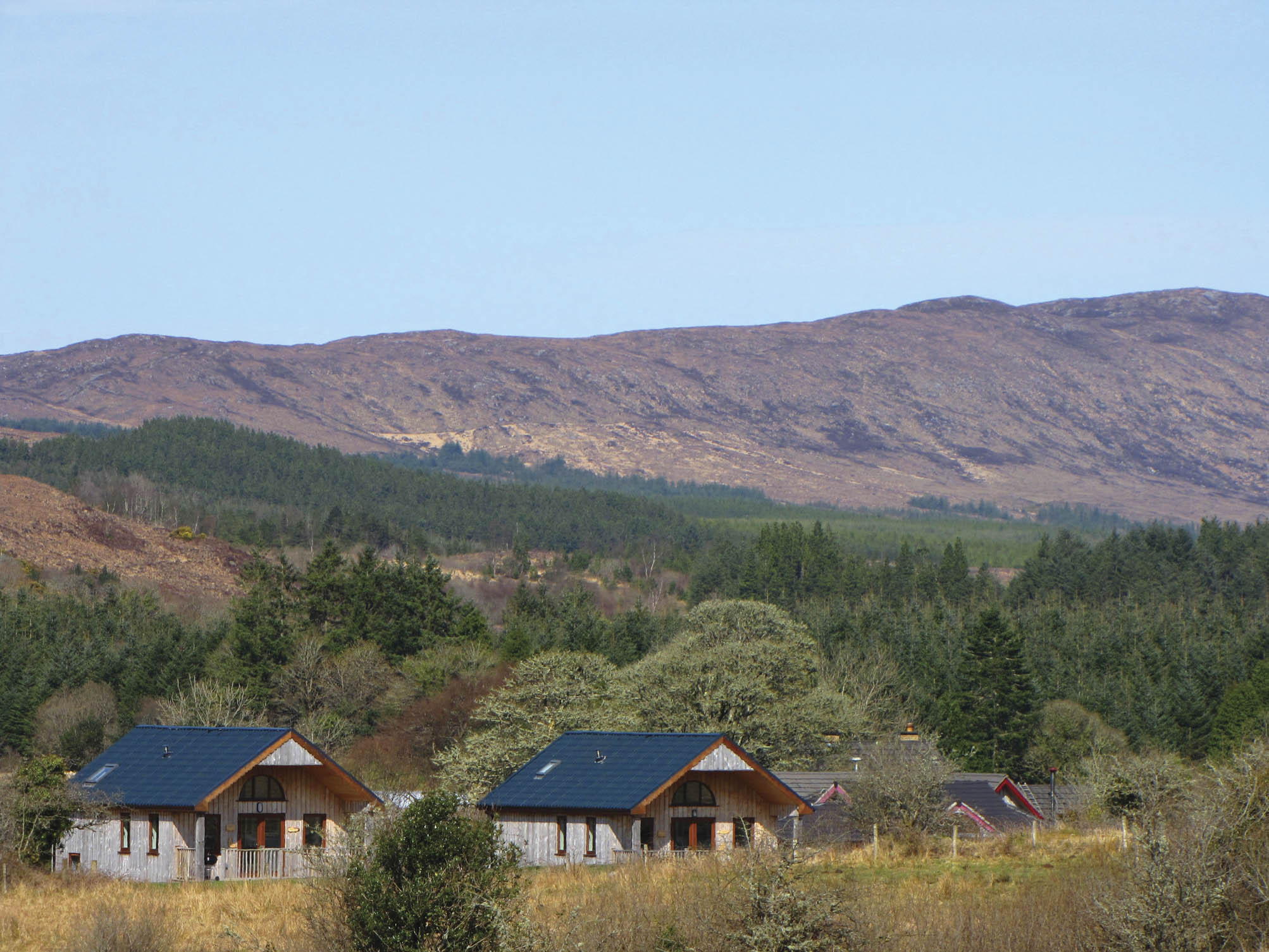 The cabins at Ard Nahoo, Co. Leitrim, where the importance of simple pleasures is emphasized.

Ard Nahoo is situated at the end of some very long, narrow, winding country lanes; so long, narrow and winding that you are bound to question if you’ve gone wrong somewhere along the way. Ignore those thoughts, as you’ll soon see the advantages of being in such an isolated spot. Once you arrive at this eco retreat centre which is set on six acres of unspoiled countryside, all you will see and hear is the natural world around you.

Ard Nahoo consists of a centre which houses a yoga studio and treatment rooms; three wooden cabins that can sleep up to a total of 17 people; and ponds, lakes and lots of wooded walkways where you can get lost for hours.

The cabin I was in was one of two three-bedroomed cabins. Made from cedar, these cabins are built along eco principles, insulated with hemp, built without the use of petrochemicals and heated using cheery wood pellet stoves.

They are comfortably furnished too, and I found them a wonderfully relaxing place to be. I spent the morning reading a book and sipping mint tea on the veranda outside.

The modern world seemed far away at that moment. While I was in Ard Nahoo, Ireland and all of Europe was in turmoil over Britain’s decision to leave the E.U. Terrorists had just exploded bombs at Istanbul Airport. But all around me was peace – sheer and utter peace.

I walked through the woods into the nearby village of Dromahair for lunch and returned for an afternoon of relaxation treatments. I contemplated my choices as I sat in the bubbling hot tub and eventually settled on a facial followed by a soothing back, neck and shoulder massage.

Once that was over, I strolled back to my cabin and took a nap. Then I lit the wood pellet stove and warmed up the dinner of vegetable curry and apple and berry crumble which was waiting for me in the fridge.

My stay in Ard Nahoo was the essence of simplicity, but then this is a place that emphasizes the importance of simple pleasures. Good food, a peaceful environment, the beauty of nature, comfortable accommodation and relaxing treatments – what more could a modern-day pilgrim ask for? ♦