Sláinte! The Doors of Dublin

“Wide is the door of the small cottage.” – Anonymous.

The story behind the Georgian houses in Dublin City and why no two adjacent doors are alike.

Mention the word “doors” to someone of the Boomer Generation (me, for instance) and the first free association response could easily be The Doors, that late 1960s music trio featuring Irish American lead singer Jim Morrison, whose iconic song “Light My Fire” earned the group a permanent place in the history of rock and roll. Repeat the experiment and it’s likely the next association will be those swinging devices that separate one place from another.

Doors are such common things that we rarely give them a second thought. But it was not always so. Our far distant ancestors most likely placed impediments such as huge boulders partially blocking the entrances to their cave-dwellings to deter both four-legged and two-legged intruders from investigating what lay inside, or hung animal hides to deflect inclement weather, but either method was poor protection at best. Eons passed before an actual door was invented.

The earliest records of doors appear in ancient Egyptian tomb paintings that show single pieces of wood closing off chambers. By 1600 B.C.E., some unknown genius had devised a rudimentary form of the modern hinge, enabling doors to pivot open and closed. Even so, the materials and skills required to fabricate hinged doors were so costly that initially they were only incorporated into temples and homes of the ruling classes. Metallurgy science and metal working technique crawled along for more than a millennium before hinged doors came into common use.

By the 1700s when medieval European cities had begun growing exponentially, their swelling populations led to a need for more urban residential areas. Ireland’s capital city of Dublin had become one of the British Empire’s most important and prosperous cities, second only to London. As the majority of the governing Anglo aristocracy resided in Dublin, streets and squares were reconfigured and remodeled to accommodate the construction boom. So that the new buildings would reflect the architecture then popular in England, developers were required to comply with particular structural and design restrictions. The resulting style came to be known as Georgian Dublin, named for the four English kings who ruled during the period (King George I-IV; 1714-1830).

Ideal Georgian townscapes were designed to give a cohesive impression of simplicity and uniformity within a particular neighborhood. Entire blocks of adjoining townhouses were intended to be viewed as a unit expressing the philosophy “the whole is greater than its individual parts.” The result was row after row of bland stone or brick facades with equally bland front doors. As time passed, enforcement of the strict design regulations waned. Residents seeking to set their properties apart from their neighbors began making changes to the one element of the buildings that could be altered – the wooden doors.

Ornate door knockers, wrought iron boot scrapers and coal delivery hole covers were easily applied expressions of individuality. More complicated were the addition of a unique semicircular multi-paned glass “fan light” above the door and, if the house was wide enough, multi-paned glass “side lights” on either side of the door, both of which let natural light into the foyer, a real boon in the days before electricity. But the most popular modification, as well as the simplest and least costly, simply required the owner to pick a bright color and give the front door a coat of paint (durable lead-based red was an early favorite).

What inspired Dubliners to start painting their Georgian doors is the stuff of Irish urban legend. One tale has it that when England’s Queen Victoria’s beloved husband Albert died, she issued an edict that all doors in her realm should be painted a mournful black, motivating the Irish, who were chafing under English rule, to do exactly the opposite. Another story holds that Dublin’s women began painting their doors in bright colors so their mates could recognize their homes when they’d had a bit too much of the drink at the local pub. A third legend, favorited by Dublin’s tour directors, tells that the very first colorful door was painted red by the well-known writer George Moore to prevent his neighbor (and fellow writer) Oliver St. John Gogarty from trying to break into his house when the latter came home inebriated and frequently confused the two houses, which then inspired Mr. Gogarty to paint his door bright green.

While Dublin’s doors are now one of the city’s top tourist attractions, they didn’t achieve that notoriety until American advertising photographer Bob Fearon became intrigued by them and took pictures of several dozen while on assignment in Ireland. On returning to his base in New York City, Fearon chose his best 30 shots, mounted them as a collage, and showed the finished product to Joe Malone, North American manager of Bord Fáilte, who loved the image and immediately set it in Bord Fáilte’s 5th Avenue window, serendipitously on the eve of St. Patrick’s Day. When people started asking for copies, Malone contacted the Irish Tourist Board in Dublin, which promptly bought the image rights from Fearon who had titled it “The Doors of Dublin,” and created a poster as iconic as the national slogan “céad míle fáilte!” – a hundred thousand welcomes.

Seems to me the image and the slogan complement each other beautifully and imply that a warm welcome waits behind every Irish door. Just like another saying found on many a souvenir Irish linen tea towel: “Bid your guests welcome though they come at any hour.” And I’ll bet the visitor will immediately be offered a hot cuppa tea and a plate of biscuits too! Sláinte! ♦

NOTE: What in the U.S. is called a “cookie,” in Ireland is called a “biscuit.” Either way you name them, these bite-sized treats are popular on both sides of the Atlantic Ocean. 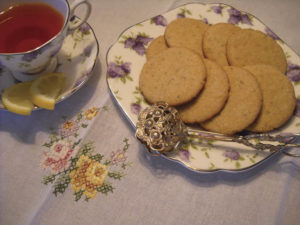 Round and golden like the sun, these sweets are suggested for a Lammas Day celebration that occurs in August and honors the sun god Lugh.

Preheat oven to 375 F. Cream butter with sugar. Beat in eggs, one at a time, until blended. Add flour and Irish whiskey and beat until smooth. Add

candied lemon peel, raisins and almonds and mix well. Drop dough from a tablespoon onto a lightly greased cookie sheet and bake for 6 to 8 minutes. Remove cookies to a wire rack while they are still warm. Makes approx. 5 dozen.

a very little bit of milk, if necessary

Preheat oven to 375 F. Cream the butter and sugar, then add the beaten eggs, little by little, adding some of the flour after each addition. Add the oatmeal, cinnamon, baking powder and salt; mix well. Add a very little milk if the mixture seems too stiff; it should be a fairly soft dough. Drop dough from a tablespoon onto a lightly greased cookie sheet and bake for approx. 15 minutes. Makes approx. 25.

Preheat oven to 375 F. Sift the five dry ingredients together and set aside. In a separate large bowl, beat egg with sugar, then beat in shortening and molasses. Add dry ingredients gradually and mix until thoroughly combined. Roll dough into approximately 1-inch balls and roll each ball in extra sugar until covered. Place balls 2-inches apart on a parchment lined cookie sheet. Bake 10 to 15 minutes until top surface develops cracks and is lightly firm to the touch.

Remove from oven and let cookies sit on baking sheets for 5 minutes, then place cookies on a wire rack to cool. Makes approx. 4 dozen.