English writer Claire-Louise Bennett’s debut novel Pond is a through-the-looking-glass experience of the human psyche in its most cloistered state, where the commonplace is ignited into something far brighter and stranger.

Some time after an academia-induced breakdown, an anonymous young woman moves to rural Ireland, although the country exists namelessly in the novel – here, it is merely the “westerly point of Europe, right beside the Atlantic Ocean.” This, as well as the basic cottage in which the narrator resides, acts as the backdrop for the 20 unconnected soliloquies that form the book’s chapters.

This episodic portrayal of a quiet life is reminiscent of the writings of philosopher Henry David Thoreau, who wrote, “I went to the woods because I wished to live deliberately, in front of the essential facts of life.” Like Thoreau, Bennett rejects the idea that a reclusive life must always be a tragic one. Instead, she is concerned with how existing without interruption can be an illuminating rather than lackluster experience. In one segment, the narrator walks among a field of cattle and wonders if they think her to be Jesus Christ. The novel is teeming with such unexpected leaps in logic, and it revels in their unique creation of meaning.

Bennett spurns the familiar with a tireless – and often humorous – grace, even going so far as to unsettle the medium of the novel itself. In the midst of one reverie, the narrator suggests that her true “first language” is not English and cannot be written down on paper: “I think it has to stay where it is; simmering in the elastic gloom betwixt my flickering organs.”

Pond is an arresting debut novel that surely commences an exceptional career ahead of Bennett. By chronicling the unnamed narrator’s atypical impressions of her daily surroundings, it convincingly advocates a path less traveled in the human mindscape.

This Must Be the Place

In the novels of Maggie O’Farrell – who is fast becoming one of the best Irish-British fiction writers of her time – disappearance is a constant theme. In her first novel, After You’d Gone (2000), her protagonist, Alice Raikes, boards a train to visit her family in Scotland, sees something so deeply shocking that she immediately returns to London and steps out into a busy street of traffic, winding up in a coma and leaving her family wondering why. In her 2013 release, Instructions for a Heatwave, the elderly patriarch of the Riordan family, Robert, goes out on his routine morning walk for paper during the scorching London heat wave of 1976 and doesn’t return, leading his family on a quest into his past.

In This Must Be the Place, O’Farrell’s most daring work to date, the disappearances are big and important, but of a different kind. We, as the readers, are kept in the know, for the most part, on where the characters who perform the disappearing acts have gone, but this time we are left to wonder about the larger questions of how any why. Daniel Sullivan, an Irish American linguistics professor, has disappeared from the lives of his two children in California after a bitter custody battle. He now lives in a remote part of Donegal in a house that can only be accessed by a long driveway with twelve gates. There, he has two young children with his new wife, Claudette, a paparazzi-hunted, Oscar-winning, world famous movie star who vanished so suddenly and thoroughly from the public eyed that some believe her to be dead. Across 28 chapters and many perspectives – some fleeting, some repeating – we learn their stories. This structure allows O’Farrell to play delightfully with form. In one, Daniel’s brilliant but introverted son uses footnotes to explain what’s happening below the surface. Another takes the form of an auction catalogue for items Claudette’s former assistant is offering up to the highest bidder.

O’Farrell’s novels are mysteries, filled with the hallmarks of your typical suspense fiction – deaths, secrets, romance, and betrayal. But the drama is always played out on a purely emotional, deeply personal level, so it never feels gratuitous or overdone, because, as O’Farrell knows well, emotional mysteries are often the deepest, most tangled kind.

Lisa McInerney created a sensation in Ireland and the U.K. with the arrival of her debut novel The Glorious Heresies in 2015 and this month (when it’s published here in the U.S.) American readers will finally have the opportunity to see what all the fuss is about.

Set amid the crumbling housing estates, drug addicts and the small time criminals who deal to them in Cork city, it’s not the tourist friendly face that Ireland generally likes to present to the world.

But from the first page of McInerney’s Baileys prize-winning novel you’ll be bowled over by the narrative force of her storytelling. Most of McInerney’s hardbitten characters are hanging on to life by their chipped fingernails, which gives their lives and this book its remarkable sense of urgency. On each page she paints a picture of an out of control Irish underworld that we rarely ever see.

The story begins when Maureen Phelan, exiled to London decades earlier to conceal her unwelcome pregnancy, kills an intruder in her home with a Holy Stone (McInerney has an eye for irony).

Georgie, another one of McInerney’s unforgettable characters, is a teenage former junkie and former sex worker desperately trying to keep her nose clean. For Georgie, Cork city is a place where the more fortunate send her hard stares that threateningly suggest she keep on moving.

Here’s how McInerney tells us what it feels like to be her: “Cork City remained a mystery, the expanse of it forbidden to people like her, a soirée to which she held no invitation.”

It’s because McInerney can write like this, and it’s because she understands what it feels like to live like this, that her debut novel is such a marvel. The Glorious Heresies is a brutal, boisterous romp that is also by turns tender and hilarious, and its appearance announces the arrival of a distinctive new voice in Irish fiction. 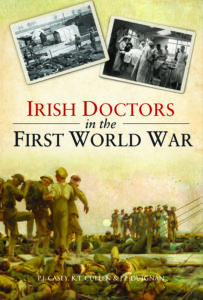 Three thousand three hundred and thirty six Irish doctors served with the British Armed Forces during the First World War. Of those, 261 were killed in action. Some were recognized and rewarded during their service, some became career military physicians, but the vast majority quietly returned to their lives before the war and continued their practice of medicine as civilians. Irish Doctors in the First World War tells the story of all of them in rich yet straightforward detail, contextualizing their service within the greater framework of the war effort on all fronts, and illustrating how their field expertise during the war led to advancements in medicine once those who did returned home.

Irish Doctors walks the line between a book of military history and a book about the medical past. For those interested in either, it will be a welcome addition, staying away from technical jargon, and offering ample background information on the war as well as the state of medicine in the early 20th century. In addition to covering the major aspects of the war (trench warfare and the Western and Eastern Fronts in particular), it also covers some lesser-trod aspects of WWI, including the African theater, assaults on Syria and Basra, and campaigns in Serbia. It is also lavishly illustrated with photos from Ireland, the front lines, medals, maps, and other ephemera that help give a sense of the chaos and clamor of both the home and war fronts.

The book is also divided into two parts, with the first telling the general story of the war, and the second getting as specific as could be possible. The latter half of the book (more than half, actually, at 303 pages) is devoted to the roll of honor for all Irish doctors who served, listing all of them alphabetically along with family details, their military record, including medals and awards. It’s a stunning tribute to see more than 3,000 names of war doctors printed end to end; it reifies the book’s impact and makes it a fitting physical reminder of their efforts.