On June 30th, Irish America magazine celebrated the Top 50 Power Women with an awards luncheon in Manhattan. The event highlighted some of the most influential and innovative Irish and Irish American women working across multiple fields, from media, literature, and the arts to politics, finance, and medicine.

While the list and luncheon showcased how integral the honorees are to the professional landscape of the U.S., the event also paid tribute to “those women in our past,” Irish America editor in chief Patricia Harty said. “We’re remembering the power women in our own lives – our mothers, grandmothers, aunts, and sisters. We all had them – women who made a difference and helped make us who we are today.” 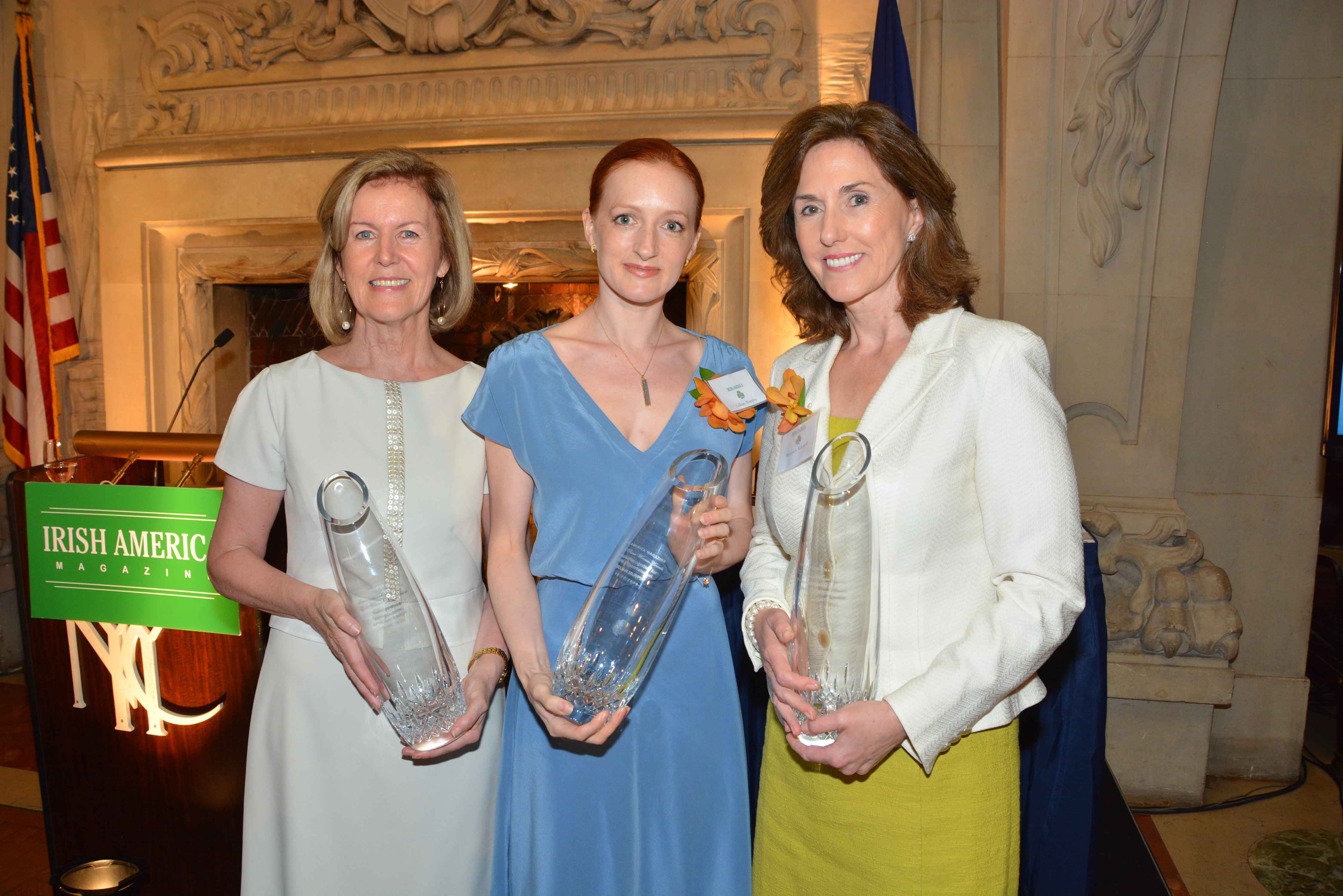 Recognition of the contributions of the ancestors was a dominant theme throughout the luncheon, as well as the acknowledgement that the contributions many of the most important female figures, personal and public, went under-recognized during their lifetimes. It was an event, too, that took the opportunity to interrogate how, and how often, women were sidelined in Irish history in the past 100 years, particularly during the 1916 Rising.

The event’s three guest speakers – Ambassador Anne Anderson, the first female Irish ambassador to the U.S.; Maureen Mitchell, president of Global Sales and Marketing for GE Asset Management; and Gillian Murphy, principal dancer for American Ballet Theatre – touched on the various aspects of contemporary professional femininity, from the barrier-breaking diplomatic appointments of Anne Anderson to the more subtle changes to corporate acceptance women have to endure in traditionally male-dominated fields. 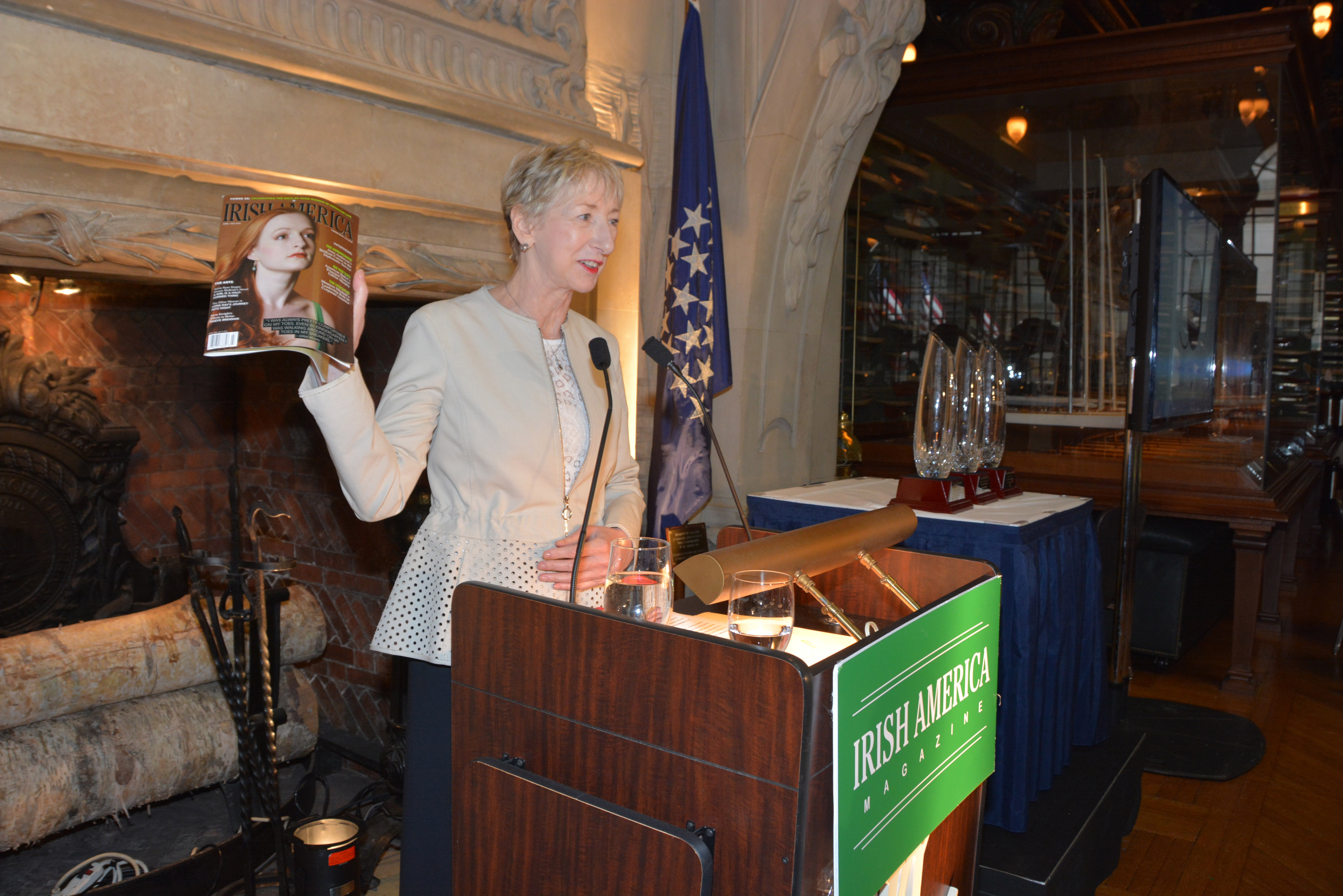 Anne Anderson, who was born in County Tipperary, spoke personally of her over 40 years of experience in the diplomatic service, highlighting that in most of her positions she was the first woman to hold the post.

“Sometimes it’s really hard to remind myself of just how challenging it was in those initial years. It was a department I would hardly recognize,” she said, referencing how male the department was and the fact that she was the first woman to be posted abroad in 1976, at the age of 24.

“I was already married at the time…. And believe me, I had to argue in order to get a married officer’s allowance and married officer’s accommodation, because nobody had any concept of how you dealt with married women in the diplomatic service,” she said.

She also touched on the fact that the work of gender equality is not finished, and to accept an award on behalf of women is to accept the challenge of leadership to continue to work towards a fairer society.

“Today’s awards recognize 50 of us as ‘power women.’ Now for some of us it might not exactly be our self-description, or we might ask ourselves where exactly we fit along the power spectrum, but I think there is one point on which every one of us would agree. Being ‘powerful,’ is of limited interest as a label, or even as an accolade. There has to be a point or a purpose to it. We want to have power for something – to be in a position to shape and influence things, to help bring about change,” she continued.

GE’s Maureen Mitchell, whose father was a lobster fisherman in County Sligo and whose mother emigrated from County Galway, touched on the more personal aspect of women’s inheritance from their maternal ancestors, and acknowledged the “steady hands” of her parents influence on her ability to adapt to a professional atmosphere that would have been completely unknown to her working-class upbringing.

“Irish women are natural leaders. We have seen that. It’s in our DNA, our history, our mythology, our literature, our politics,” she said.

“Women’s entire lives are about change – physical, emotional, situational. If you’re a mother, you understand change. You understand crisis; you understand nurturing, listening; and you understand exhaustion. And you understand the fundamental unpredictability of life. Irish women have a special kind of strength and toughness, muscles accumulated from centuries of determination, of facing down adversity. It’s a kind of connected tissue that links us across the generations, the globe, and the centuries. And I believe it links all of us here present today.”

ABT’s Gillian Murphy touched on the issue of contemporary immigration, and linked the Irish experience to the experience of todays immigrants who are coming from farther abroad than Ireland, and acknowledged the fact that more than half of Irish immigrants were women, which was unique to any country from which America received emigrants. Because of the contributions of her Irish ancestors, she said, “in the 21st century Irish women can choose any path in life that we desire.”

“There have been a lot of unkind words used about immigrants lately,” she said. “But the experience of immigrants today is not far removed from the experience of our own families had decades or centuries ago, the same poverty, the same discrimination, and we should help America’s newest immigrants find their own here today as well. Because today’s immigrants are tomorrow’s ballerinas and business workers, doctors and presidents. Their experience was the Irish experience, and they deserve the promise of America as much as we do.”

In addition to the honorees in attendance, other guests included New York City Councilman Mark Levine; Valerie Biden Owens, Vice President Joe Biden’s sister and one of the first women in the United States to have managed a modern U.S. Senatorial campaign, as well as a Presidential campaign (both for her brother); and Jack Haire, CEO of Concern. ♦

Leave a Reply to Cora Creed