An Irish researcher is currently undertaking a public appeal for information on surviving objects related to the Irish women suffragettes who fought for the right to vote nationally almost a hundred years ago. Donna Gilligan is a museum archaeologist and material culture historian who is compiling a research thesis on the visual and material culture of the Irish women’s suffrage movement. The year 2018 will mark the centenary of the first granting of the right of national vote to Irish women. Donna hopes to record any surviving suffrage material in her research catalogue, with the aim of publishing this record by the time of the centenary. 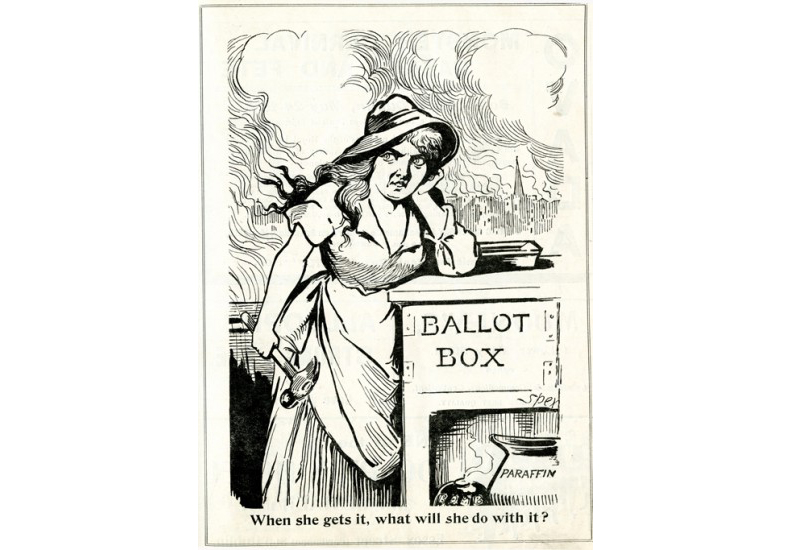 Political cartoons, like this one by Spex (John Fergus O’Hea), were widely distributed.

Her early research has uncovered very few surviving objects present in our museums and archives, and it appears that the ongoing nationalist movement formed the main focus of contemporary collection of objects from this period. The numerous Irish suffragist groups are known to have produced a range of promotional objects for their cause, with many of these displaying the national colors, as well as suffrage slogans and organizational acronyms. A large number of domestic objects are also known to have been used by suffragists during public demonstrations and militant protests. It is Donna’s hope that many suffragist objects may today be held in private and family collections, and may not yet have been officially documented. ♦

For anyone who has, or knows of, any associated suffrage objects, contact her at donnapgilligan@gmail.com.