Downey on location in Morocco during the filming of The Bible series.

Roma Downey received the first ever Irish Diaspora Award from the Irish Film & Television Academy (IFTA) and the government of Ireland in Dublin on April 9 for her “extraordinary achievements and vision as a producer and an actress alongside her charity and humanitarian work worldwide.”

Born in Derry, Northern Ireland, the youngest of six, Roma and her husband, Mark Burnett, the British-born television producer she married in 2007, live in Malibu, California with Reilly, her daughter from her marriage to director David Anspaugh, and James and Cameron, Mark’s sons.

Though she first made a name for herself as an award-winning actress, particularly in her nine seasons as Monica on the CBS series Touched by an Angel, Roma is also a highly successful producer.

In 2009 she formed LightWorkers Media, which has produced several mega-hits including The Bible, the 2013 Emmy-nominated miniseries, watched by over 100 million viewers in the U.S. alone.

“You made the Bible the water cooler talk in the United States of America,” Oprah Winfrey said to Roma, who not only produced the series but played the role of Mary the mother of Jesus.

In 2014, LightWorkers Media re-cut The Bible series as a film about Jesus called Son of God, and produced a two-hour special for Lifetime television on Women of the Bible. Both were well-received, as were A.D. The Bible Continues on NBC and The Dovekeepers for CBS. 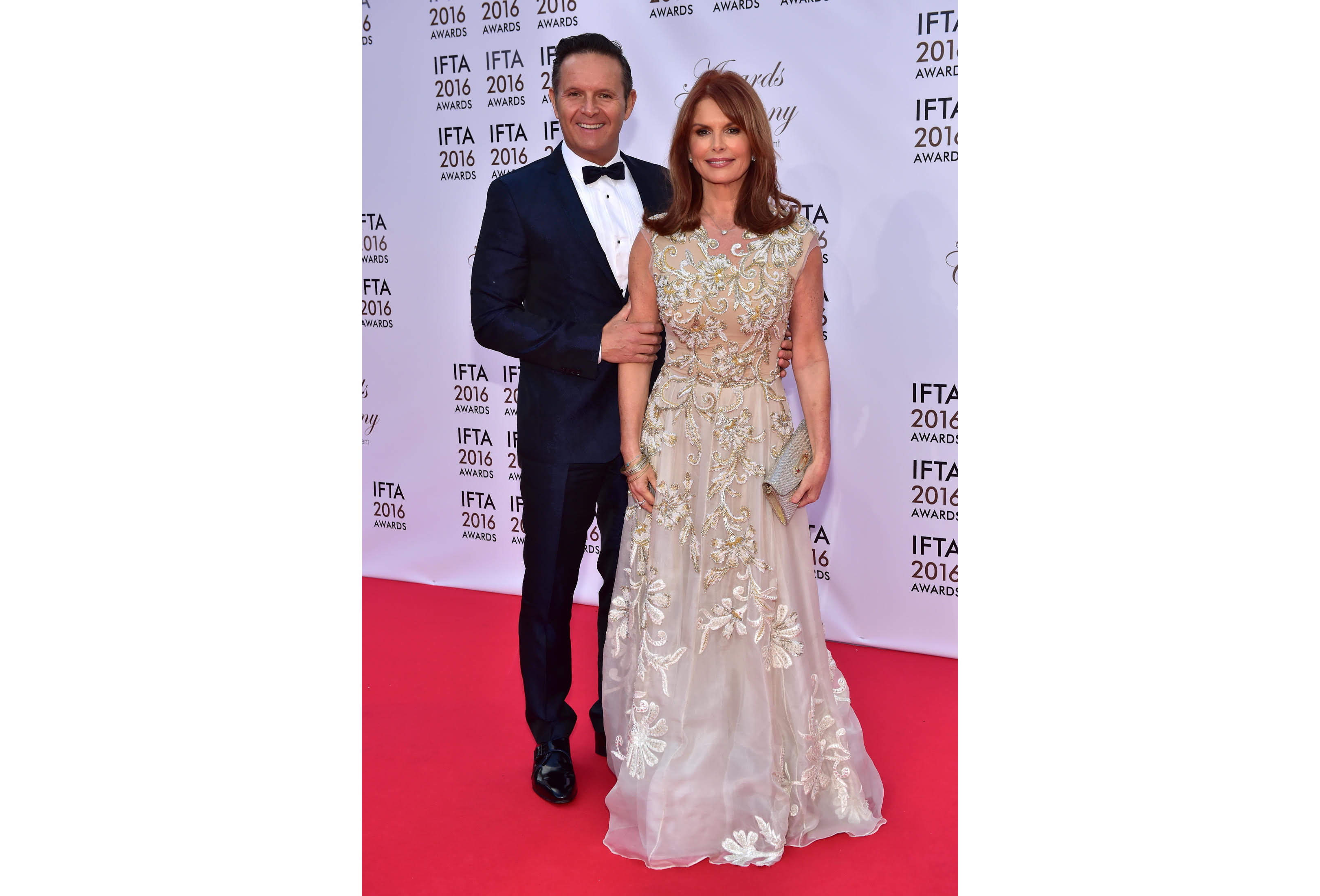 Downey with her husband Mark at the IFTA Awards.

This coming August, a new version of Ben-Hur, starring Jack Huston and Morgan Freeman, will be released by the company, which MGM acquired last December.

Burnett now runs MGM’s Television and Digital Group, while Downey remains President of LightWorkers Media, which has become the Faith and Family Division of MGM.

“I never dreamed when I left Ireland 25 years ago to tour America with the Abbey Theatre’s The Playboy of The Western World that I would be back here now having produced Ben-Hur for MGM and Paramount,” said Roma to the IFTA audience.

After the Abbey tour ended Roma decided to stay in New York. “I had empty pockets and a heart full of hope,” she said. “I was checking coats one day and starring in a TV mini-series the next – the American Dream.”

The mini-series, A Woman Named Jackie (1991), won an Emmy and rave reviews for Roma in her starring role as Jacqueline Kennedy Onassis. She was on her way.

The offers came pouring in, but the scripts were disappointing with only stereotypical parts for women. Then along came Touched by an Angel and the role of Monica, a messenger of God. Here was a chance to express the faith that had sustained her when, as a ten year old, she lost her mother and faced years growing up during the Troubles in Derry. Once, Roma was visiting her mother’s grave and found herself pinned down during a gunfight in the cemetery. That night her aunt found that a bullet had grazed Roma’s red coat. 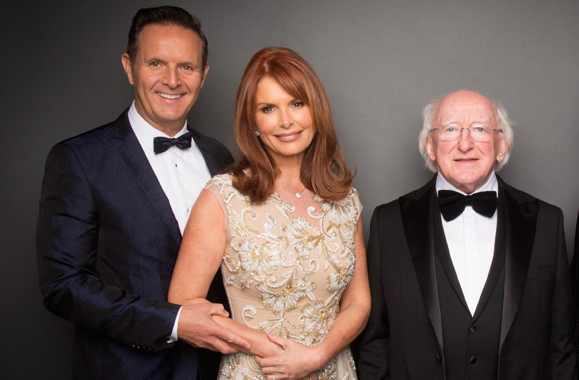 Downey with her husband Mark and President Michael D. Higgins at the IFTA Awards.

So Roma knew what it was to depend on belief. Still, a show about angels? Not much chance here for commercial success. But Touched by an Angel (with an audience of over 20 million viewers a week) would become one of the highest rated TV series ever with multiple Emmy and Golden Globe nominations, in prime time from 1994 – 2003 and still being seen in syndication.

Roma’s success enabled her to give back and the birth of her daughter, Reilly (named for her mother Maureen O’Reilly Downey) made her sensitive to the needs of children. It was at this time that she became involved with Operation Smile.

“We asked Roma to film with us in Vietnam twenty years ago. Since then she has become the catalyst enabling us to change the lives of hundreds of thousands of children,” said Dr. Bill Magee, the plastic surgeon who together with his wife, Kathy, a nurse, founded the non-profit medical group that provides surgeries for children around the world who are born with severe cleft lip and palate deformities.

Downey is more than just a spokesperson for the organization. She has traveled on several missions with Operation Smile, sometimes taking her family along. “Every child deserves the dignity of a smile, and because of the amazing volunteer medical teams of Operation Smile, free care is given to children who might never even be able to dream of a normal life,” she says. 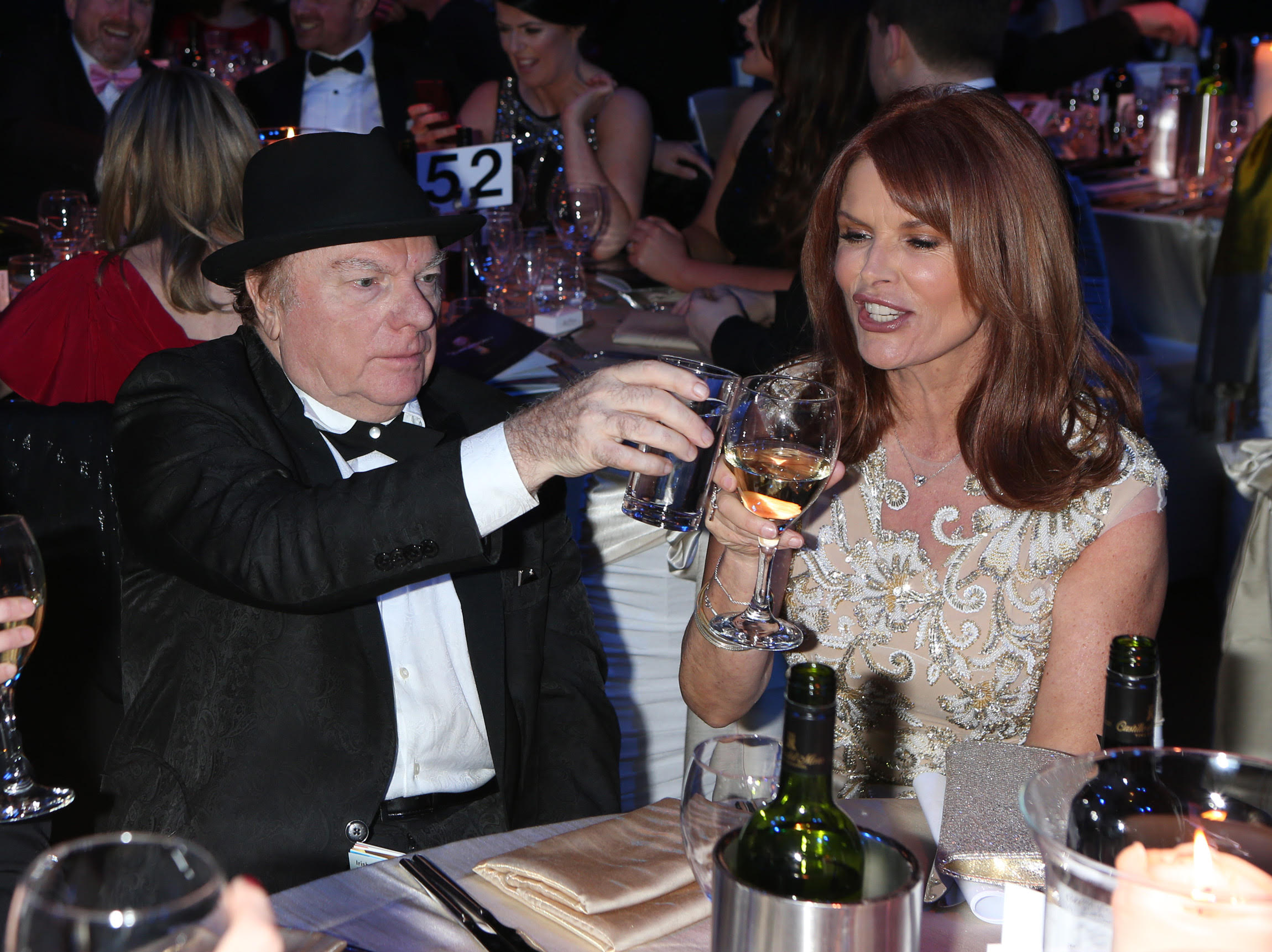 Roma is also a patron of the arts, giving generously to both Dublin’s Abbey Theatre and the Irish Arts Centre in New York, and supporting The Playhouse in her home town of Derry.

The Playhouse was founded during the worst of the Troubles by Pauline Ross who decided the city needed a space where the transformative power of the arts could encourage peace and reconciliation. “Roma has been our generous patron from the very beginning,” Pauline says. “I love that her company is called LightWorkers Media, because she is spreading light and love.”

“I am a Derry girl,” Roma said in her IFTA speech. “The life lessons I learned growing up in Derry remain with me. It’s who I am. And no matter where I go I carry them in my deep heart’s core.”

On the morning following the IFTA event, I traveled with Roma to her hometown.

Family and friends gathered for Sunday dinner in a room of a recently-built hotel where a huge plate glass window (unthinkable during the Troubles) looks out over the new Peace Bridge that connects the Cityside to the Waterside, uniting both sides of the community in the miracle of ordinary life.

Downey on a mission with Operation Smile, the non-profit she’s been involved with for the past 20 years.

“I chose this room because you can see the Peace Bridge from one side and Saint Eugene’s Cathedral, my parish church, from the other,” Roma tells me.

She gestures at the group. “These are the people who formed me and still nurture me,” she says. “My family is here. Classmates and teachers from my high school Thornhill College and friends of my parents. Now that my mother and father are gone it’s a way to keep them close.”

Children play together. And every guest takes a cell phone photo of Downey and the statuette. I sit next to a woman who tells me, “Roma gets her talent from her mother, Maureen. She was the best actresses and mimic in Derry at a time when drama, songs, and stories kept us going.”

“The arts were how we survived,” says Madeline McCully, who taught Roma painting. “Roma showed great originality and I was delighted when she graduated from the Brighton College of Art. But then she went on to the Drama Studio in London.”

“Oh but she had to be a performer,” her drama teacher Mary Murphy says. “She touched audiences with her warmth and humor and a deeply spiritual beauty.”

The two teachers smile at each other remembering Roma as a young girl at Thornhill College.

The school takes its name from The Hill of the Thorn Trees – where the hawthorn, a sacred tree, has grown since the time of the Druids. Even today, a branch of hawthorn blossoms marks the Irish festival of Bealtaine and decorates May altars devoted to the Blessed Mother – a good place to cultivate feminine energy.

As sunset light shines on the gathering, fiddler Frank Gallagher sends the first notes of “The Derry Air” floating out into the room. Downey said later it was her favorite moment of the evening.

“The music brought a kind of calm to the room. Even the children responded. All of us held together by that ancient tune,” she said.

It was as if we were united in some profound way. No need to hear the words of “Danny Boy.” We knew them. Roma had visited her mother’s grave earlier that day and said “an Ave there.” But as Frank played there was no loss, no past, only the eternal reality where the women of Ireland passed their strength from mother to daughter down through the generations.

“Since Roma was a little girl,” says Pat Hume, the Downey’s long time neighbor and friend, “I’ve been impressed with her compassion and serenity.”

Compassion and serenity. Hardly the usual adjectives for someone about to get her own star on the Hollywood Walk of Fame, but as MGM CEO Gary Barber says, “Roma is one of a kind.” ♦