Molly Long greets a baby lamb, one of the first signs of Spring, at Easter 2016. (Photo courtesy of the author)

To receive a personal letter and gift from the President is one of the lovely Irish ways of honoring centenarians. We were indeed proud on May 19, 2016, to read to our mother, Molly Long, a message from President Michael D. Higgins: “What a wonderful occasion for you, your extended family and friends as you reminisce and celebrate a life great in years, and I have no doubt, rich in accomplishments. I join with your family and friends in wishing you a very happy 100th birthday.

“Born, as you were, in the second decade of the twentieth century, you have lived through remarkable times in the history of Ireland and the world. You have witnessed remarkable changes, in lifestyles and technological developments, unimaginable at the time of your birth in 1916.”

My mother, Molly or “Mam” as we call her, was fifth in a family of nine children born to Kate Sayers and Maurice Donnacha Boland in Fahan on the Dingle Peninsula, County Kerry, overlooking one of the most spectacularly beautiful coastlines in Ireland. Atlantic waves crash against the rocks or glisten blue in the sun, hedgerows drip with fuchsia in summer, and stone walls, beehive huts and Ogham inscriptions on headstones recall ancient times in pre-Christian and early Christian Ireland. She was born in the days of candlelight, paraffin lamps, pumping water from the well and drawing turf from the mountain bog, days that were hard in rural Ireland of the time.

“That was how things were, our life was simple and we were happy,” she likes to say, adding with a smile, “My mother was patient, hard-working and kind and my father a hard working poor devil of a farmer who liked his medium and chaser.” 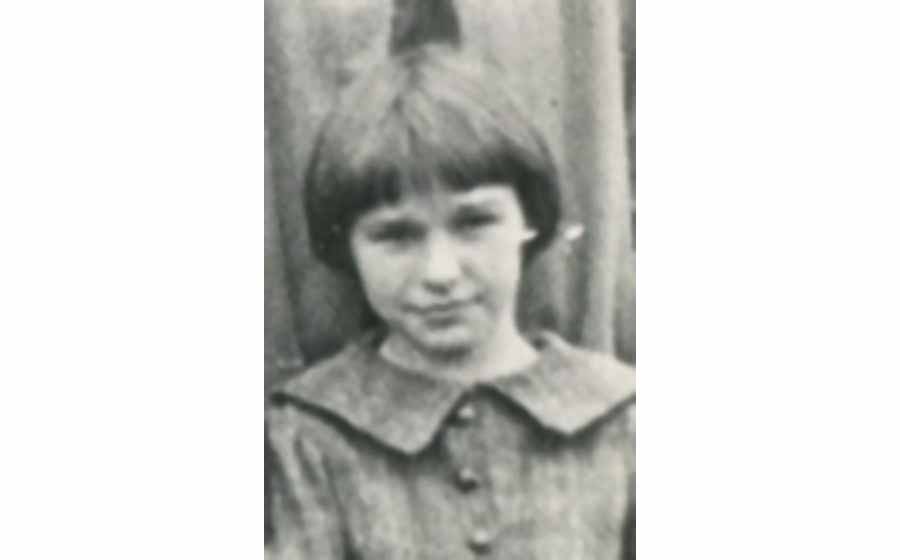 Molly Boland at 9 years old in 1925. (Photo courtesy of the author)

Snippets of family history have been recorded in her various notebooks over the years. Her maternal grandparents were Seán Sayers and Jude Lynch; her paternal grandparents Donnacha Boland and Máire Rua Murphy. “My granny was elegant. I think I’m like her but thank God, I don’t have her hard, sad life. Three of her children died of TB, the deadly disease of those days. She prayed constantly and many a rosary we said together.”

Like her grandmother, God has been an ever-present force in mother’s life and his Mother Mary as real as her best friend. “Tá Dia láidir agus Máthair mhaith aige.” (God is strong and has a good Mother), I have often heard her say with conviction in her native Irish language.

In one notebook, she recorded scrambling after her brothers over the sheer rocks to pick seaweed and gather shell fish, and climbing the mountain to the bog and walking home behind three donkeys laden with side baskets or creels of turf.

She loved math and Irish and earned a scholarship to Scoil Chaitríona, Eccles Street, Dublin, run by the Dominican Sisters and in 1929 at the age of 13, set off for boarding school. Here she formed fast and lasting friendships with fellow students Eileen Ashe, Máire McEntee and Siobhán Manning. She developed a lifelong love of poetry in both Irish and English.

On mother’s 100th birthday, my sister posted a little video of her reciting with strong voice and mellifluous cadences her two favorite poems, “The Hound of Heaven” by Francis Thompson and “Anois teacht an Earraigh” by Antaine Ó Raifteirí, on Facebook; the latter concludes with the line: ‘Is dá mbeinnse mo sheasamh i gceartlár mo dhaoine./ D’imeodh an aois díom is bheinn arís óg’ (And were I to be standing in the midst of my own people, age would depart from me and I’d be young again), to which she adds wryly, ‘I wonder!’”

Upon completing secondary school, Mam returned home to discover that her mother was very ill with cancer. She cared for her to the end, and also watched with a heavy heart as one by one, four brothers and one sister emigrated to America. The first two brothers would return in 1956, many years after both parents had died. In later years, my mother visited me in California and later in Washington, D.C. On both occasions, there were emotional reunions with her family in Detroit, and she made a third visit for the funerals of two of her brothers. 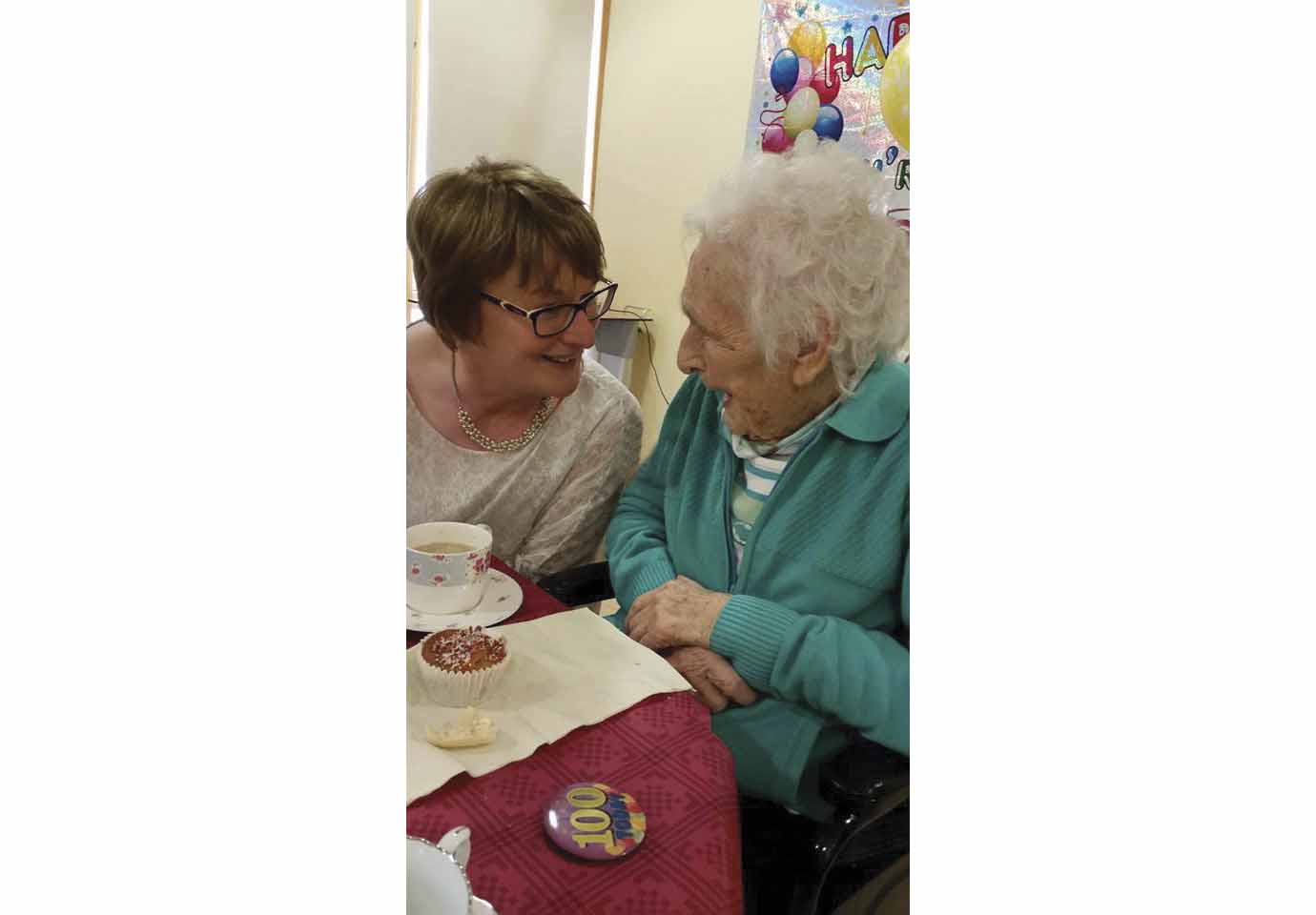 Molly Long with her youngest daughter, Brenda, on her 100th birthday. (Photo courtesy of the author)

Mam married her childhood sweetheart, Michael Long, in 1940, and moved to Fleenstown on the borders of Meath and Dublin, as part of the resettlement of poor, Irish-speaking farming families from Kerry and other areas of the South and West, to the fertile grasslands of the East. This internal migration was part of Fianna Fáil’s efforts to safeguard the Irish language and to deal with agricultural poverty in the newly independent country. The nine children in the Long family grew up in something of a “little Kerry” since five families on our lane hailed from there and were all Irish-speaking. They brought with them to Fleenstown the tradition of céilí dancing in one another’s homes, “set dances and old time waltzes as a neighbor-musician played the accordion or melodeon,” she fondly recalls.

While she has always missed the striking landscape of Kerry, my mother adapted easily enough to her new home. She loved animals, dairy farming, and gardening and threw herself into doing all it took to survive through the strict rationing of goods that came with World War II, and later through her husband’s long and trying illness.

Nanny, my Dad’s mother, lived with us until her death in1956 and helped care for our growing family. Like her own mother before her, Mam was “handy with the needle” and even acquired a knitting machine and started a little business. Families in the neighborhood helped one another and readily shared what they had.

Many who know her describe my mother as extraordinarily kind. Her nine children, 17 grandchildren, and 20 great-grandchildren are blessed to have experienced her love and we know we have received lessons and blessings from her. Her lively and unwavering faith life is an inspiration to all of us. She has shown us how to live with joy and sorrow, through the ups and downs of our lives, through Dad’s struggle with the effects of bipolar disorder, through the death of two of her adult sons from cancer, and the untimely death of her beloved granddaughter, Michelle, a few months after her twenty-first birthday.

What is the secret of her deep happiness? She would say “hard work, a loving family, good friends and neighbors, and the ever-present care of Our Lady.”

To my mother, in her present frail state, lovingly cared for by the staff at Kilbrew Demesne, on the hundredth anniversary of her birth, I echo President Higgins’ birthday wish, “May you be surrounded today by the warmth of happy memories and secure in the knowledge that you continue to make this world a better place for all who love you.” ♦

Please send photographs along with your name, address, phone number, and a brief description, to Patricia Harty at Irish America, 875 Sixth Avenue, Suite 201, New York, NY 10001. If photos are irreplaceable, then please send a good quality reproduction or e-mail the picture at 300 dpi resolution to submit@irishamerica.com. We will pay $65 for each submission that we select.