Maureen O'Hara with daughter Bronwyn. Image from the "Delani Collection" for presentation on "Maureen O'Hara Magazine on
Facebook." Photo courtesy of the Author

Bronwyn, daughter of legendary Irish actress Maureen O’Hara passed away on May 25, 2016 in Glengarriff, County Cork, Ireland. The memorial service was being held in Glengarriff on June 11th.

Bronwyn was born in Los Angeles on June 30th, 1944, daughter of Maureen (O’Hara) FitzSimons Price and Will Price.  During her childhood and teen years she explored the possibility of being an actress like her mother.  She appeared in “Spencer’s Mountain”  (1963) and later co-starred in “The Ravagers” in 1965 with John Saxon.  She also appeared in various TV series episodes in the 1960s including “The Alfred Hitchcock Hour,” “The Cadaver,” McHale’s Navy,” “The Virginian” and “Bachelor Father.” 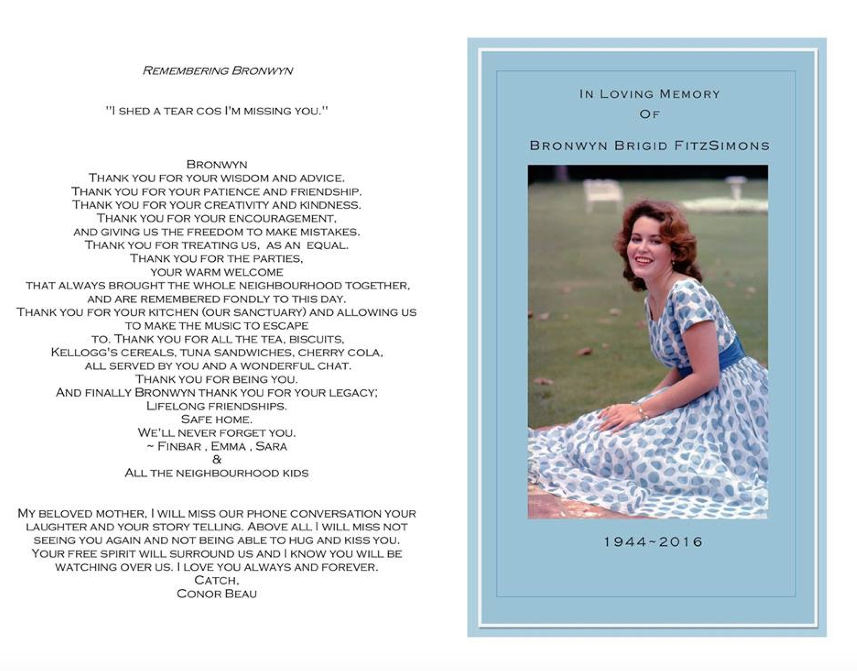 Memorial card for Bronwyn Brigid FitzSimmons. Courtesy of the author.

Bronwyn married in 1968 and her son Conor was born in 1970. During her life in Los Angeles she was surrounded by a huge family that included her mother, grandparents, aunts, uncles and cousins; many of whom emigrated from Ireland.   It was perhaps this influence that drew her back to Ireland the 1960s where she settled first in Dublin and later in Glengarriff, County Cork, Ireland.

Bronwyn loved music.  She began taking piano lessons at age 4, but soon became more proficient on the guitar and even gave guitar lessons. She shared her mother’s love for Ireland and during her over 40-year residency there she composed songs and lyrics for a number of years; first as a hobby and eventually evolved into a CD that was published.  She was also a European History Major and a collector of historic books.  Above all, Bronwyn loved entertaining and was recognized locally at both of her homes in Ireland as an absolutely delightful hostess. During her final years, Bronwynsettled in a lovely cottage in Glengarriff and enjoyed the friendship of the village. She will be greatly missed by all who loved her. ♦