Beyond the Bog Road

The first new album in 10 years from fiddle virtuoso Eileen Ivers traces traditional Irish music to Canada’s Nova Scotia, and through the Scots/Irish root of Bluegrass and Old-Time music of Appalachia, and on to the Cajun sounds of the South.

“The bog roads of Ireland were paths into ancient sod fields, laboriously farmed to provide an essential source of fuel and warmth.”

So begins the liner notes to Grammy-Award winning, multiple All-Ireland Fiddle champion Eileen Ivers’s most comprehensive and reflective album to date, Beyond the Bog Road. Its release coincided with the first night of her new tour, bringing this historic musical journey into the present day. “It was great to come out with a bang. We were out in San Francisco, in a very celebratory mode having heard the album was number three on iTunes that day, ” said Ivers, calling me from the road. 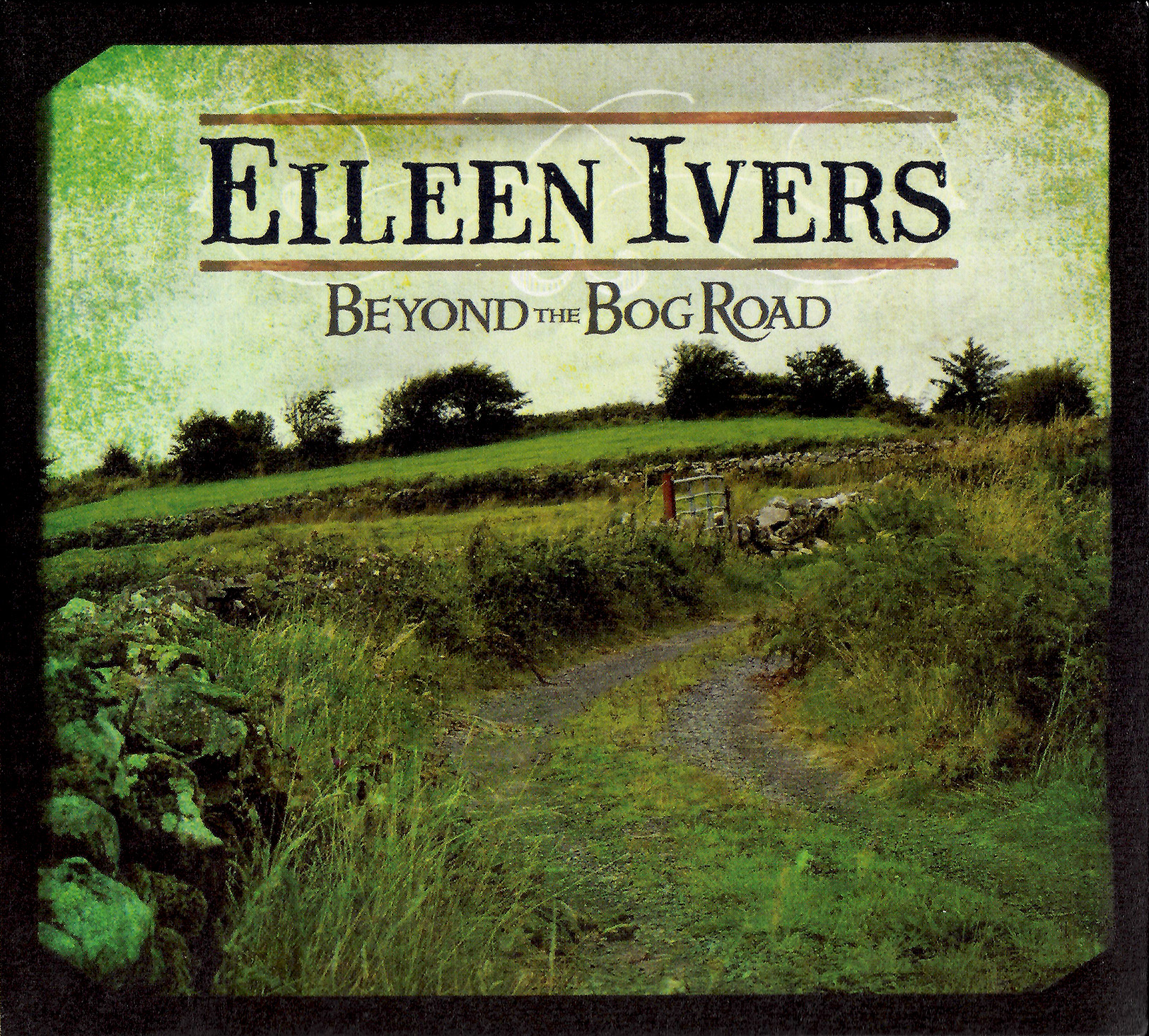 Beyond the Bog Road (Entertainment One Music, 2016)

Having spent childhood summers in Mayo helping her grandfather bring home the turf along bog roads, Eileen’s personal connection to this ancient source of fuel sparked a musical story of emigration, integration, and evolution.

Her parents emigrated from Mayo and Connemara; her mother with great memories of her uncle’s fiddle playing, and her father’s love of American Bluegrass are writ large on this album. “My dad didn’t play, but always wanted to. They have these steel pipes on the gates in Ireland with holes drilled in them. When the wind was strong and blowing through the tubes he would go over and press the holes like he was playing tunes. The soul has to play music!”

Eileen lived the first-generation Irish-American life in the Bronx during a musical time and space that produced many champion Irish musicians. Her early teacher was master fiddler Martin Mulvihill, a County Limerick native who regularly brought his students back to Ireland to compete. It was Mulvihill who first taught Eileen not to be hemmed in by the notes on the page, to explore what the fiddle could do and to play with heart.

Lifelong friend and Cherish the Ladies frontwoman, Joanie Madden, remembers being in school with Eileen and dozens of kids playing Irish music – many of whom won medals in All-Ireland competitions. She also recalls Eileen joking with her about the tin whistle being “for babies.”

“She’s taken that back, trust me. But I always remind her of what she said to me in 6th grade – every time she asks me to play on one of her albums.”

Uilleann piper, Jerry O’Sullivan, played in Eileen’s band from 2000 to 2003, but remembers first hearing her play in the mid-seventies at the VFW on 238th Street in New York. “Even as a ten-year old, she was a great player. Martin Mulvihill was her teacher and when you hear tunes she learned from him, you hear Martin.” As for Eileen today, Jerry is still impressed. “No one does it as well as her, this bluesy-Irish improv. There are a lot of imitators, but none as interesting as she is… she is the best player with the best technique.”

Eileen was drawn to the violin’s sound in jazz, rock, bluegrass, and continuously unearths the parallels between the genres. She has played a significant role in integrating Irish traditional sounds with American music, having played with Sting, toured with Hall and Oates and Riverdance, and guest starred with over 40 orchestras. Dubbed the “Jimi Hendrix of the violin” by the New York Times, she recently performed a rock version of the National Anthem at the 2015 NBA Championship. “It was such a privilege. [Stephen] Curry giving me the thumbs up and high five afterwards. I was beaming with pride.”

The beginnings of Beyond the Bog Road are as old as Irish music itself; a path long in existence before Eileen began her own journey. The album features music from Nova Scotia, Bluegrass, and Old-Time music of Appalachia, and the Cajun sounds of the South. “I had always wanted to connect all these roots. I started kind of slow with the research and then started recording around 2009/2010.”

One of the many highlights of Beyond the Bog Road is the pairing of Irish tunes to an American counterpart, allowing listeners to hear the similarities and influence of one on the other. With double the recorded material needed for the CD, creative choices were made to keep the story progressing.

“‘Kitty’s Wedding’ and ‘Smith’s Delight,’ I knew that combination had to be on there. Both tunes have similar melodic structure. For ‘Linin’ Track’, I took two railroad-themed songs one from the Irish-American experience and one from the African-American experience. There were coal mining songs I had – all kinds of work related tunes – some had to get cut. You want to tie it all together to make one complete thought, one statement, and then you have to let it go. I’d hate to lose them though, so perhaps there will be a follow up CD.”

The show Eileen and her band created for the tour is a multi-media sensation. Followers of Eileen’s Facebook page received sneak peaks of the album’s tracks through beautifully produced music videos. “We did a few shows with some of these videos showing behind the band. We have seventeen hours of footage, all around the places I grew up during my summers in Ireland, in Mayo and Connemara. There’s so much there – we’re actually thinking about putting that out on a DVD. It’ll be a challenge to get it all together but we’re working on it.”

The album opens with Walk On, a Cajun-style tune in which Eileen focuses on the obstacles that come up in life, from the emigrant experience, moving on, leaving home, and how you’ve got to keep moving forward. The music is a simple “drone-y fiddle” groove knitted together with an Irish reel.

Eileen not only composed the music, but took her first stab at songwriting in the process of taking a deeper look at life. “I never thought I was a songwriter – that’s a weighty title for sure – but I love to read, I love words and thoughtful ideas and putting them together. I wanted a certain kind of song, a certain sentiment, and said to myself, ‘Geez, Eileen, maybe take a stab at it.’ I wanted to bring in something of the year that impacted our lives so much.”

And what a year it was. In the album’s early stages, life intersected in a momentous way. Eileen and her husband Brian welcomed their son Aidan in May of 2012. Three months later, Eileen’s father passed away. Then Brian’s father passed away in September and his mother in October.

“There was a lot going on that left me thinking about the afterlife, so the record, in an interesting way, got very much reshaped. I think when you are coming from a place of writing and composing yourself, there’s something a little more heartfelt in the process. You’ve got to keep the faith. It got us through a lot, and I wanted to put that in there. We need to be positive, but gosh it’s so hard at times.”

Breathing life into Eileen’s lyrics is Tim Shelton, a singer with bluegrass roots she met through their mutual agency. “He’s such a gentleman, a wonderful soul, an incredibly kind man, and that voice – I absolutely fell in love with Tim’s voice. It draws you in. I played a track for my father when he was in the hospital and he said, ‘Oh, I like that!’ and gave me the thumbs up.”

The path of Beyond the Bog Road leads out of Ireland, through the music of America, to present day. The themes of tradition, history, music appreciation, and culture on this CD naturally lend themselves to the classroom, and Eileen and her band take every opportunity to bring their music into schools. She says, “we want children to learn to be influenced by the arts, to be hopefully moved by roots music, and to see that this isn’t an archaic art form – that it’s relevant today. It’s an extension of the past right into the present.

“We do an hour program and I’m really wanting to do much more. I’ll use the electric fiddle and record a four-bar loop, bang the fiddle, get a little drum groove going and play the loop on top of it. They think it’s cool! You’re like a mini rock star to them. It’s beautiful to think we’ve actually moved these kids to maybe check out some different music or maybe take up an instrument, or just be more open to tradition and culture.”

Out of Ireland, through the Bronx, driving north on that last drive to their new home, Eileen recalls getting off the exit as Sarah McLachlan’s “Angel” came on the radio. “I blasted it! ‘In the arms of the angel / May you find some comfort here…’ I just love it. It was back in ’99, and Brian and I were getting ready to be married, prepping for 300 of our closest friends.” Those friends included a star-studded band hand-picked by T-Bone Wolk, former bassist for Hall and Oates. “When I was on the road with them, he would say to me, ‘Eileen, when you get married, I want to put the band together.’ And true to his word, he did. And on her wedding day, she found herself rocking out in her backyard with Billy Joel’s sax player, guitarist G.E. Smith, and Paul McCartney’s drummer. “It was this dream band, unbelievable!”

With the album complete and greatly received, Eileen reflects on family during a break from her tour – her childhood summers in Ireland with grandparents, in the Bronx with her friends and mentors, returning to her father’s land with her son and placing their fingers on the same holes he did, in that same gate. Eileen feels blessed to have her family, and to have been with her father when he passed.

“He had a full life, thankfully. My sister Maureen is a home care nurse and she was over-the-top incredible. She’s an amazing woman. While he was in the hospital she would go and give him a bath every night. She is one of the most selfless people I’ve ever met. At the end, she held one hand, I held the other, and typical Irish – we opened the window to let his spirit out. It was incredible. Looking at it now, it was such a blessing the way he passed. I thank God every day for that. And the same with Brian’s parents – he was there for both. It really helped to move along, to cherish every moment and be the best you can. Be there for your son, your family, for anybody.”

On the back of the CD there’s a picture of her father waving. It was taken the last time he was in Ireland. The image used to break her up, now makes her laugh. “Those older Irish guys, they would just take it on. That little wave says everything.

“We had a lot of time, a lot of life. He had a gentle passing, but it impacts you forever. My music and writing comes from a much more centered, reverent place now. Life is about helping each other and working hard. I want to put thoughtful art and performances out there. I want to leave every drop of everything I have out there on stage, to seize the moment and just go for it. Life is a gift.” ♦