An image from the first issue of the Irish Times following the Rising. The caption reads in part, “The corner of Lower Sackville Street and Eden Quay, as seen from Burgh Quay.” (Photo: W. McCrae, Berkeley Road / Irish Times, 1916)

The first issue of The Weekly Irish Times published following the Easter Rising has been digitized for free by Ireland’s Great Hunger Institute at Quinnipiac University.

The issue, covering the weeks of April 29, May 6, and May 13, calls the Rising “The Darkest Week in the History of Dublin.” A subheading on page one reads “An Orgie [sic] of Fire and Slaughter.” The 12-page issue offers first impressions of the Rising following the executions, as well as what it calls a “complete illustrated record,” with images of the leaders, the ruined city, and landmarks comprising much of the issue. 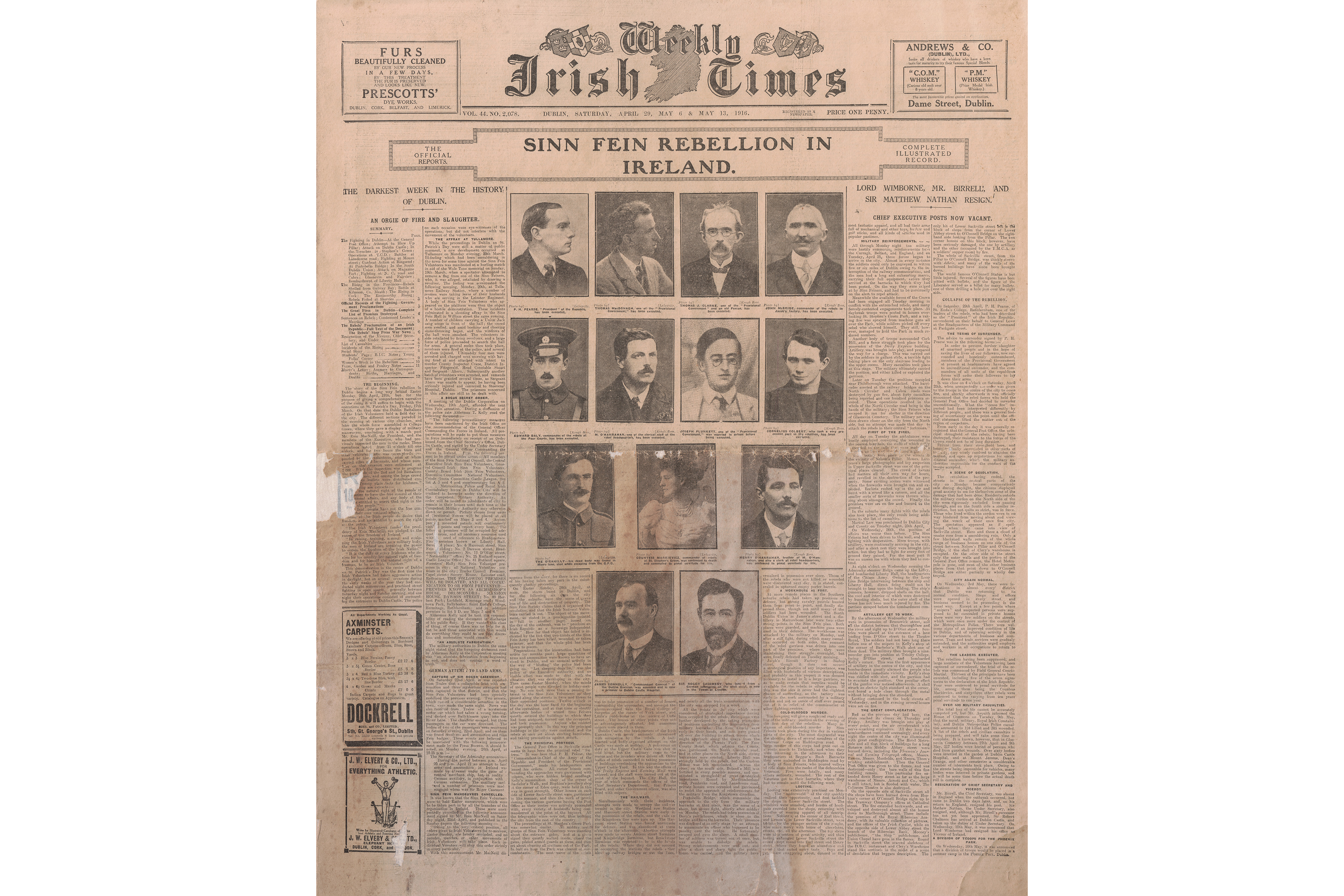 Page 1 of the Weekly Irish Times following the Rising. Click to enlarge.

Christine Kinealy, director of the institute, worked with Mary Glynn, information analytics manager at Quinnipiac, to make all 12 pages of the newspaper available for viewing and research.

“Newspapers provide a fascinating window into the past,” Kinealy said. “This edition is particularly poignant as it brings the first news of the men executed for taking part in the Rising. We are delighted to make it freely available to anybody interested in learning more about the Rising and its immediate aftermath.” 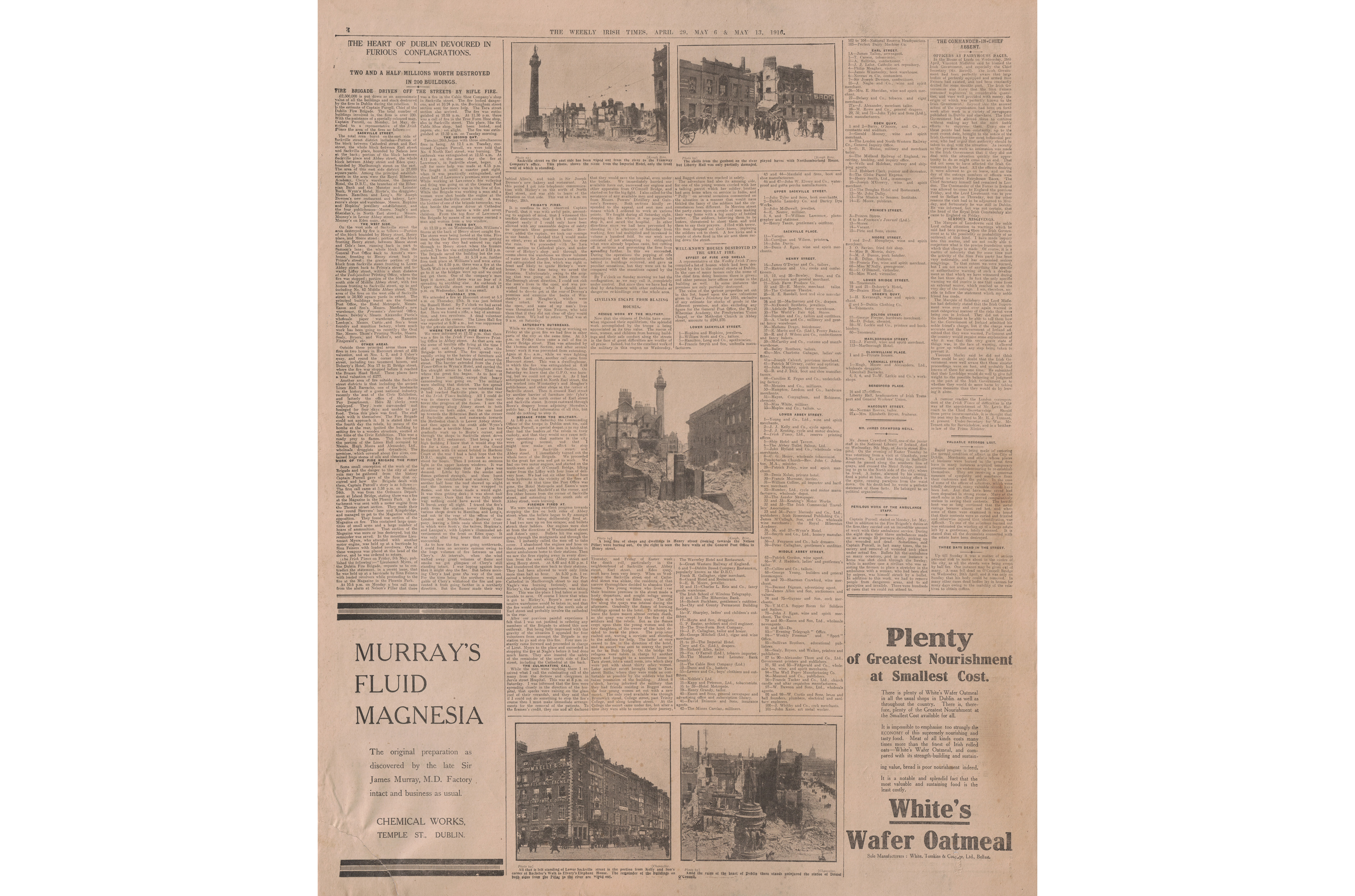 Page 4 of the Weekly Irish Times following the Rising. Click to enlarge.

The first issue is featured in the institute’s exhibit, “The Seed of the People: 1916 Remembered,” which runs from March 23-Sept. 30 in the Lender Family Special Collection Room, located in the Arnold Bernhard Library, on the Mount Carmel Campus.

The exhibit also features both a full Proclamation of the Irish Republic, which is being loaned to the institute by Jim Callery of Strokestown House in County Roscommon, Ireland, and a rare half copy of the Proclamation, considered to be one of the most important documents in Irish history, which is on loan from Todd Allen of New Jersey. 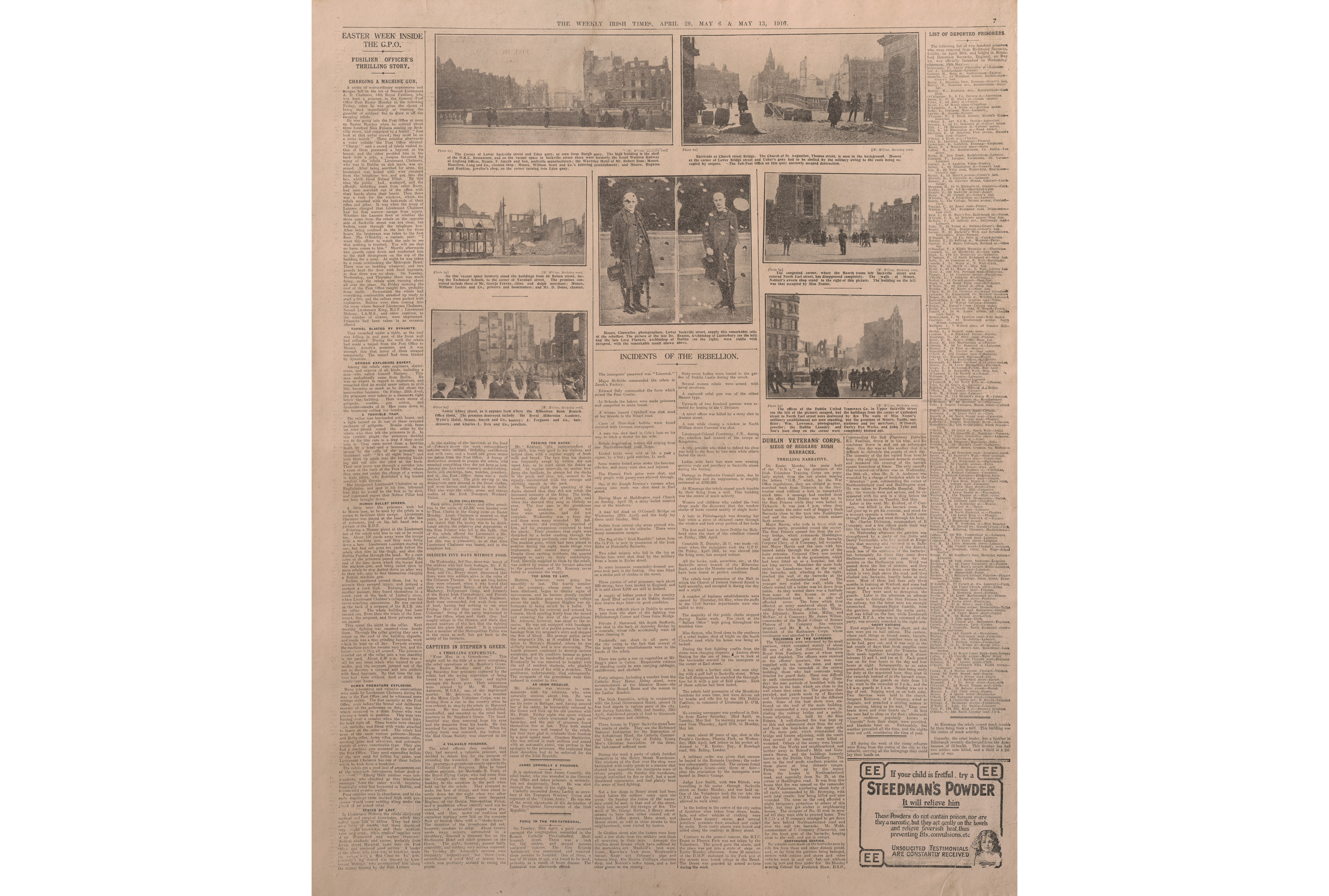 Page 7 of the Weekly Irish Times following the Rising. Click to enlarge.

In addition to “The Seed of the People: 1916 Remembered,” Quinnipiac will screen the documentary film, “1916: Irish Rebellion,” on Sept. 29 from 4-7 p.m. in the Mount Carmel Auditorium in the Center for Communications and Engineering. A panel discussion will follow with faculty from Quinnipiac and the University of Notre Dame.

The complete issue can be viewed online here. ♦

Exhibit hours are Monday through Saturday from 9 a.m. to 5 p.m. and Sundays from noon to 5 p.m. All events are open to the public. For more information about institute events, call 203-582-7809.

One Response to “Weekly Comment:
Explore the First Weekly Irish Times Published After the Rising”

Leave a Reply to Don Browne