By Patricia Harty, Editor-in-Chief
April / May 2016

John Concannon is the Director of “Ireland 2016,” the state centenary program to commemorate 1916, reflect on the Republic 100 years on, and re-imagine Ireland’s future. Prior to Ireland 2016, John was director of Fáilte Ireland, the national tourism development authority. He was selected as Irish “Marketer of the Year” in 2011 for his work marketing Ireland, and was nominated again in 2013 as the Creator of “The Gathering Ireland 2013.” He is the chairman of Gaisce – the President’s Award, is a Co-Creator of Ashoka Ireland’s ChangeNation, and is a Director of ChangeX.org social enterprise. He is Chairman of COPE, a Galway charity for homelessness, domestic violence, and support of the elderly. John is a graduate of the National University of Ireland, Galway and holds a Bachelor of Commerce, a Masters in Business Studies, and a Higher Diploma in Marketing Practice. John lives in Galway with his wife Mary, and three daughters, aged 12, 10, and nine.

What were your first thoughts when you were asked to lead the 1916 centenary commemorations?

What effect do you hope the centenary year will have on the country?

This is a pivotal year for Ireland. We will look back and remember a hugely significant time in our history, reflect on our journey as a country over the last 100 years as we built a Republic, and also take the opportunity to re-imagine Ireland’s future 100 years from now. I hope that Irish people and our diaspora will look back on 2016 with a sense of pride.

How do you think the goal for the commemorations differs between Ireland and America?

The Ireland 2016 Commemoration program has been put together with input from citizens and diaspora around the world. Likewise, the program in the U.S.A. has also been developed following wide consultation with diaspora across the country. The result is a very considered, creative, inclusive, and ambitious program with events and initiatives all across America. It is very encouraging to see the strong leadership of the Irish Embassy and the Consulates all over the U.S. in the development of a very comprehensive Ireland 2016 Centenary program. The goal in both Ireland and the U.S. is essentially the same: to reflect on our rich history and heritage in a way that is appropriate to each individual. On a recent trip to New York for the launch of the North American Ireland 2016 Centenary program, I was really struck by the huge passion of our American diaspora to commemorate and play an active, involved role in this special year.

Will you be spending a lot of time in the U.S.?

I’m just back from a promotional trip for the Centenary in the U.S. In the U.S. alone there is a very ambitious program for Ireland 2016, with over 450 events all across the country. I look forward to returning again during the year to attend some of the great events in the program.

Did you ever think of emigrating?

Yes. Myself and my wife Mary considered moving to Rome or London after we got married, but after much consideration we chose to move to the west of Ireland and set up home in Galway instead. We love living in Galway, and 13 years later, we are still here (but now with the addition of three small girls!). 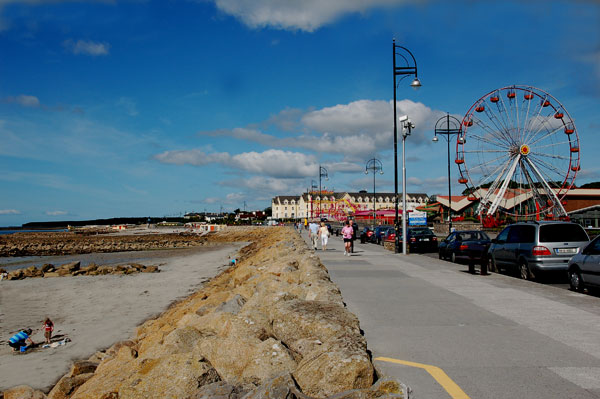 The Salthill Promenade in Co. Galway.

What do you say to criticism of the lack of Irish language on the official Ireland 2016 website?

The Irish language is absolutely central to the Ireland 2016 centenary program. One of the program strands is called “An Teanga Bheo”, which translates as “The Living Language” and is made up of a rich and diverse range of initiatives celebrating the Irish language. All of the material produced for the Ireland 2016 centenary is bi-lingual. Any criticisms would have related to a very early version of the web site, we have ensured the Irish language is very prominent in all of our work, and the official centenary website, ireland.ie, is fully bilingual.

One of your favorite Twitter hashtags is #PositiveIreland. Why?

I love Ireland and am a proud Irishman. Ireland is a truly special place. Irish people have great imagination and creativity. Ireland is a great place to live, to bring up a family, or to visit. We have a unique, rich culture, a very strong democracy (one of only four that survived in Europe over the last 100 years), and we are a peaceful people – we have the longest unbroken U.N. Peacekeeping record of any country in the world. Lots to be positive about!

Why did you leave a successful career in the private sector to work with Fáilte Ireland?

I really enjoyed my time working in business and the decision was one I did not take lightly. But I was, and continue to be, really excited by the concept of “public service” and the inherent promise, challenge, and opportunity to make a positive impact on our country.

Tell me about your work with COPE.

I am chairman of the Galway charity, COPE Galway. We provide a shelter for victims of domestic violence, hostels for people experiencing homelessness, and support for senior citizens in the community including a “meals on wheels” service. Any society should be judged by how it looks after its most vulnerable, and that’s where COPE focuses its energy. We are working hard on the development of a major new facility for victims of domestic violence and their children, for which we have 75 percent of the fundraising complete, and plan to start the building this year.

What was your favorite part of the job in promoting the West?

Working with the multiplicity of small businesses across the west of Ireland like activity providers, accommodation, and attractions was a fantastic experience. It’s an amazing part of the world full of very genuine people and great characters.

Both, but as we are now in the middle of Rugby season, I am more focused on Rugby. I was really lucky to be at the Millennium Stadium in Cardiff when Ireland beat France in the World Cup, which turned out to be Paul O’Connell’s last game for Ireland. The atmosphere in the stadium was epic.

What is your favorite pastime?

Spending time with my wife and children, relaxing around Galway.

Your top five places in Ireland?

A favorite piece of music that lifts you up?

I’m a huge music fan and love listening to a wide range of music – U2, Stone Roses, Edith Piaf, to Ed Sheeran. A very hard call to make to pick just one piece, but I will pick “Bad” (the live version) by U2.

What’s on your night stand?

My Kindle and a selection of beautiful cards my children made.

What is a movie that you will watch again and again?

I go for a run on the prom in Salthill, Galway and look out over Galway Bay and the mountains of the Burren. Breathing in the fresh air off the Atlantic, and the epic vista, is magical no matter what the weather.

If you were to sum up the Irish experience in a couple of sentences?

In Ireland we love to talk, to chat, to discuss things, no matter what the topic – politics, sport, books, movies, theater, national affairs, international affairs – everyone has an opinion. Irish people have a natural curiosity, and a very welcoming nature. People are welcome to join conversations, and visitors are welcome to visit our country.

What is your hidden talent?

Playing the guitar (badly) and singing (when nobody is listening!).

If you weren’t doing what you are doing, what would you do?

In a parallel universe, I would love to be a travel book writer.

That’s a tough question, and nothing really comes to mind other than our house in Galway. We live in the city, in a great neighborhood, halfway between the beach and the town. ♦

One Response to “What Are You Like?
John Concannon”