Records for countless Irish families -- including that of Annie Moore, first to arrive at Ellis Island (seen here with her brothers for the first time colorized) -- are held in this remarkable collection.

Last July, the National Library of Ireland went live with a digitized collection of Irish Catholic parish records from the 1670-1900 time frame, a huge boon for those of Irish heritage. Just one catch. No index. Well, there were a variety of partial indexes scattered here and there on other sites, but no comprehensive one.

In an article published in the Oct/Nov 2015 issue of Irish America magazine, I wrote, “Be patient and wait for the almost inevitable search tools that will appear on other websites. More than likely, one or more genealogy companies such as Ancestry.com, FindMyPast, and MyHeritage began transcribing the records the day they went live.”

Sure enough, both Ancestry and Findmypast released their indexes today. The timing was fairly predictable as today is the beginning of Irish-American Heritage Month. 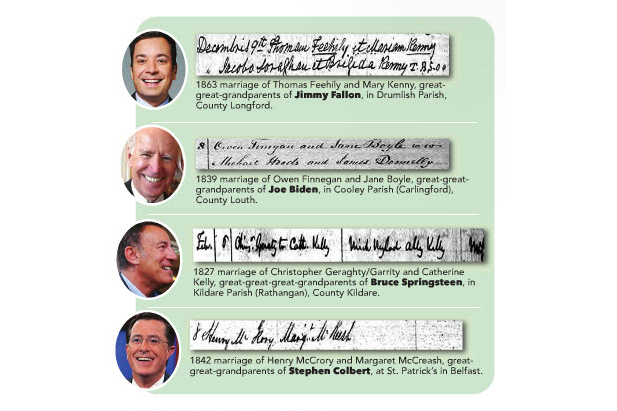 Examples from this collection that ran in Irish America magazine.

The actual records themselves are patchy – some parishes have none, some have records for certain clusters of years (most commonly, a chunk of the 1800s), and so forth. That said, this is a really big deal for those with Irish heritage because – for many – this will go a long way to removing the considerable impediment of having to know exactly where your ancestors came from in Ireland before diving into parish records. In fact, many will now learn where their ancestors came from in Ireland from this tremendous collection.

As an added bonus, both companies are offering special access to celebrate their launches, and FindMyPast has committed to keeping them free forever! So what are you waiting for? Start digging for those Irish roots! ♦

Megan Smolenyak is a genealogist and the author of six books, including Trace Your Roots with DNA and  Who Do You Think You Are?, a companion to the TV series. She prefers to call herself an incurable genealogist and sometimes author. Her most recent article for  Irish America, “The Spy in the Castle,” concerned the Dublin Metropolitan Police officer and Michael Collins spy David Neligan.

One Response to “Weekly Comment:
Irish Genealogy Just
Got a Lot Easier”